The King of Dragons; the best Capcom beat em up nobody seems to remember

It's interesting when it comes to gaming and large developers like Capcom, Konami, Sega or Namco....they were all prolific makers of games and they had a ton of hits...which seemingly means some of their best output almost feels forgotten about by most people.

That's 100% what feels like what happened to The King of Dragons. It's just an absolutely incredible beat em up that can stand toe to toe in my opinion with Final Fight, AvP or The Punisher...yet its one of Capcom's arcade games that rarely gets mentioned in any list of "best beat em ups of all time"

You can 100% see how Capcom used the formula of The King of Dragons to make the two D&D games that came out on the CPS 2 (Tower of Doom and Shadow over Mystara) as the light RPG and upgrade system in those two games is borrowed whole cloth from The King of Dragons...which is a good thing!

But it got me thinking...what other games are legit amazing that time seems to have forgotten about? Because I can think of a few but I always love learning new game suggestions from Gaf people I may not have encountered yet

oh and for real if you DONT know what The King of Dragons is....how?! go play lol

I remember trying out this game long ago. IIRC you can use the shield to cover yourself, which I think was a very cool mechanic and helped making the game less button-mashy.

lol sorry to admit i have no clue what this game is.....i'll have to check it out!

lol sorry to admit i have no clue what this game is.....i'll have to check it out!
Click to expand...

Haha thanks for proving my point...there is an awesome Capcom beat em up out there that a lot of people don't even know exists

thanks for opening my eyes to it.

Better than AvP? Nah, mate. I respect your opinion, but AvP is the greatest beat em up ever to grace humanity.

It's part of Capcom's Beat Em Up bundle

I bet most people got it mixed up with Knights of the Round.

I don't seem to remember this game

I have never heard of it.

Played it on SNES with a buddy back in the day. Good game but we played and enjoyed the D&D games more.

Loved this game. I think I'll play through it again today.

Loved this game back in the day. I think it was forgotten because Capcom and Konami were releasing so many of these at the time.

Knights of the Round which came out a couple months after King of Dragons feels closer to what we got with the D&D games.

The final form of King of Dragons + Knights of the Round was Red Earth.

IDKFA said:
Better than AvP? Nah, mate. I respect your opinion, but AvP is the greatest beat em up ever to grace humanity.
Click to expand...

I have this on cart. It's pretty simplistic compared to their other belt scrollers but it's really fun.
N

I thought I was alone loving The King Of Dragons!

One of the best, if not the best, beat em ups of all time!Both the Beat em up collection just to replay that masterpiece.

Here's hoping that Capcom makes a sequel one day.

I got fatigued of Capcom fighters a long time ago, they all seem more or less the game reskinned game.

This was awesome on SNES. I always went Cleric. is on threat of perm for trolling. Please report.

Cleric all the way

I have the arcade and snes versions, which one the best to play?

Nobody? It's one of my fav games of all time, played the shit out of it on the snes.

It's one of the worst (or less good) Capcom beat'em ups. Seems the OP

Final Fight, Alien vs Predator, the two DnD games, Cadillacs & Dinosaurs, Captain Commando... Capcom has many beat'em ups that are better than this one.
Last edited: Sep 1, 2021

Haha but that game feels totally different. Sure it’s a beat em up but it’s on a single plane of movement. So while I absolutely love Magic Sword and did a video on it...it still feels mechanically different enough to not compare it to The King of Dragons

VGEsoterica said:
Haha but that game feels totally different. Sure it’s a beat em up but it’s on a single plane of movement. So while I absolutely love Magic Sword and did a video on it...it still feels mechanically different enough to not compare it to The King of Dragons
Click to expand...

Yeah I get it. Magic Sword, King of Dragons, and both DnD(Tower of Doom and Shadow over Mystara) beat em up games by Capcom are some of my favorites of all time.

I always prefer Magic Sword for some reason.
J

I never heard of it ngl when I saw the title I thought it was going to be something like King of Monsters.

This game is sick! I played it a ton with friends along with their DnD games.

That era of Capcom fantasy beat em ups is blending into each other for me, or I am losing my memory.

I thought King of Dragons, Magic Sword, and Knights of the Round were the same game. Although I remember playing Magic Sword and BaseBall Stars in the same arcade a ton till SFII was released.
N

Golden Axe Revenge of Death Adder. Never got ported from arcade and is mostly forgotten about but it was the real sequel to Golden Axe. 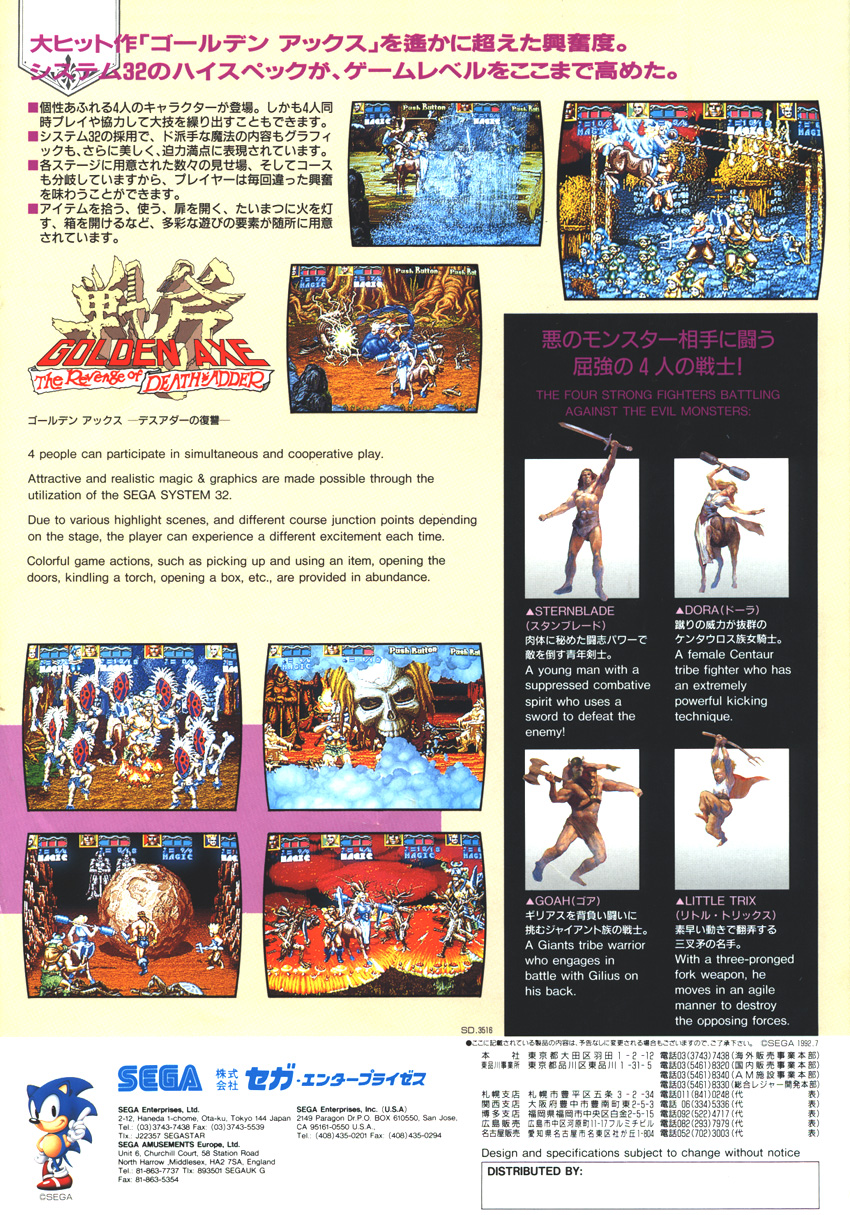 NT80 said:
Golden Axe Revenge of Death Adder. Never got ported from arcade and is mostly forgotten about but it was the real sequel to Golden Axe.

My favorite beat'em up ever right there! Dora is my main all day every day. I imported that little Astro City arcade emulator thing just so I could have it available to play anywhere lol. My girlfriend loved it too.

On a side note in regards to Capcom's DnD games, I recently found out about their Puzzles and Dragons game for arcades and PS2 collection. There is a lot of artistic similarity between the two games, and I really dig the style they both have. But anyway, I noticed that the warrior chic uses the same scream the Elf does in the Mystara games. Or one of those lady screaming samples lol. Game looked really cool, I'd love to play it one day, but it'll probably have to be emulation since Capcom doesn't want my money.

Spent tons of coins into this little gem. Awesome game.

Seriously though, I played through this in the newest Capcom beat-em-up game (for the first time ever, weirdly enough) and fuckin loved it.

Never heard of it, I'm afraid.

At the time my greatest joys were Cadillac and Dinosaurs, which I believe is the best beat up ever.

Looks great! I've been meaning to play Knights of the Round and Revenge of Death Adder since I saw them in the Capcom logo arcade stick thingie. I have a friend whose attention span doesn't last much more than the length of an arcade beat em up so they are perfect.
S

Fond memories of this from my university days.

Looks like a good game. Me and my roommate have been playing old beat em ups on the raspberry pi recently. Going to have to add this on the to play list.
O

The SNES port of this game was actually really good. I also like their other game Knights of the Round, both very under rated and came out to little fanfare at the time. Very little hype for either. Both got decent ports.
Last edited: Sep 2, 2021

Kuranghi said:
Looks great! I've been meaning to play Knights of the Round and Revenge of Death Adder since I saw them in the Capcom logo arcade stick thingie. I have a friend whose attention span doesn't last much more than the length of an arcade beat em up so they are perfect.
Click to expand...

Great game that I personally love.
The best?

It’s one of my favorites. It’s deeper than you think, which is what makes it great. I also have the Astro City mini and enjoy Golden Axe: Revenge of Death Adder. The SNES port was pretty damn good. It’s also way easier than the arcade game as it’s tuned to be a console game. Knights of The Round is also up there in greatness.

Now, other games like D&D are far more technical. That shit is too technical actually and for me gets in the way. It’s flashy and fun, but not as distilled. AvP and Battle Circuit are also cool, but use elements from Street Fighter that in my opinion, fall flat. When they were made SF2 and fighting games were all the rage, and it just hasn’t aged well gameplay wise,
Last edited: Sep 2, 2021

Definitely not the best but really really good, my friends and I used to play the hell out of it on SNES

Nah, Dungeons and Dragons : Shadow over Mystara was the best they ever made.

I'd thought about making a 30th anniversary thread (CPS1) for it but felt I couldn't do it justice so I guess this will do.

The legendary Yoko Shimomura was behind the soundtrack and it is fantastic (duh!) but the SNES port later in 1994 really makes it shine with the drumwork being done justice and the rest of the instruments being phat as well.
It's a pity that I've only ever found one good arrangement of the music and it doesn't cover the amazing first boss theme (my favourite of the lot).

Spritework is excellent throughout and it's a very colourful affair. Beyond the lovely visuals and audio, what I really like about the game is its brisk pace, no-frills gameplay and that opening warcry on every level (HOOOO!).

Regular enemies don't feel like damage sponges, your regular attack feels good and before you get bored you're facing a boss or bosses and then it's off to another different, yet beautiful locale. By the end of the game it'll feel like you've gone on an eventful quest with all the variety.

Basically, instead of seeing a bunch of combos flying left and right with up to two other partners, you're all just mowing baddies down with good positioning and timing.


TL;DR: it's an epic journey. ​
Little tidbit: The director of this game was working on what would go on to be Street Fighter III: New Generation. There's a good read at Polygon about SFIII for anyone interested.

It's a bit of a complicated story, but [Tomoshi] Sadamoto, the director of The King of Dragons, initially conceived of making an original fighting game that wasn't part of the Street Fighter series.
- Akira Yasuda
Click to expand...

The King of Dragons is a fine game.

5. Golden Axe or The King of Dragons

Though not a beat em up, a true hidden gem is Grand Knight History by Vanillaware. Unfortunately it was only released in Japan.

It is one of the best . It is easily in my top five all time. Right behind Dungeons & Dragons Shadow of Mystara
You must log in or register to reply here.

SpiceRacz replied
Apr 14, 2022
Gaiapolis; the marriage of a beat em up and an RPG. A great example of genre mashups