So we first started hearing about this with The Evil Within and (judging by some screenshots) possibly Wolfenstein.

I assumed this was just ZeniMax trying to get around idtech5 performance issues in a way others were unlikely to attempt, but now that they're not the only high profile projects doing it, I wanted to raise the question if people think others will try it as well.

The notable advantage here is you render 280 less horizontal lines of pixels, saving a notable amount of performance to spend elsewhere. The down side is that you get black bars even on 16:9 (1.77:1 ratio) widescreen television. 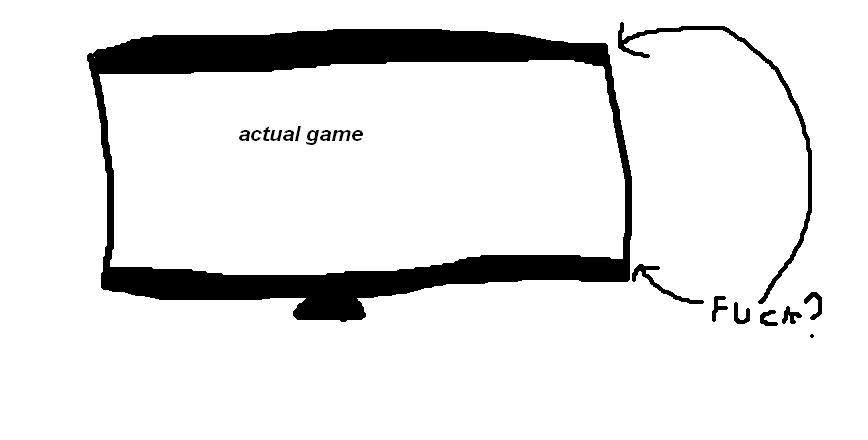 Horrific if this is ends up being the case for the final game.
M

Are they using something with the touchpad? That's the exact resolution of the touchpad.
G

I don't mind black bars too much (dragons dogma, re4) but they don't make games more filmic. They make them slightly squishier
C

I fully support this development. I've got a dedicated 2.40:1 projector screen waiting for this game.
Z

I'm up for it. Love movies in scope and if it helps get to 60fps I can live with it.
N

I never noticed the black bars in Dragon's Dogma until I saw people talking about them online. I still didn't notice them until I specifically looked for them, then forgot about them immediately. They're black space and my mind just deletes them along with the bezel of my TV. I don't care.
G

And here I was thinking chromatic aberration would be the main issue with next gen.

zomgbbqftw said:
I'm up for it. Love movies in scope and if it helps get to 60fps I can live with it.
Click to expand...
If it does, than I completely agree.

We both know it won't, though.

Smartish way to do sub-fullhd res. I'm wondering too if we'll see this in many games. I can't even stand it in movies, I tend to zoom them to fill the whole screen whenever I can.
R

The Dark Sorcerer demo also used this format didn't it? Looks like we're going to be suffering a lot letter boxed games with Vignette out the ass.

I could see it being copied if The Order's a big hit. But I don't see it becoming a trend.

I have no problem with the idea. I'm all for different things.
V

This is stupid. Stop doing this.
It's stupid in movies too.
O

so we'll have huge black bars on our HDTV like some blu-ray films? do not want

I think for games that is pretty dumb. In films it makes perfect sense for specific framing, but that argument goes out of the window as soon as you give the player control over the camera.
V

Probably just for the E3 video. It makes no sense other wise, It would be just easier to stick to 720p.
B

Black bars in a video game? You can keep it.
A

I wonder if Sony will let us have Soccer scores during the 1886 season in those blackbars.
D

I have never been a big fan of adding bars to make a game more cinematic, I just think it looks crummy. I really like having games take up the full vertical space.
F

Y2Kev said:
I don't mind black bars too much (dragons dogma, re4) but they don't make games more filmic. They make them slightly squishier
Click to expand...
Tagged both of the games good enough for me to not even notice after 5 minutes.

This is something that will work just fine on a game-by-game basis, and should be judged by how distracting it is vs the game's performance.
Y

CassidyIzABeast said:
Sub 1080p right out of the gate.
Click to expand...
I predict many games will be 720p.
D

I think I'd take that. Don't want it upscaled to fill the full frame though.
O

IHaveCandy said:
Are they using something with the touchpad? That's the exact resolution of the touchpad.
Click to expand...
Coincidence, most likely. Other games, like Dragon's Dogma, have also used non-standard aspect ratios for performance reasons.
M

VibratingDonkey said:
This is stupid. Stop doing this.
Click to expand...
Yes.

It's stupid in movies too.
Click to expand...
What?

Dragons Dogma did this? It was fine, now sure if the ration was so low, won't look too good on 720p TV's I'm guessing.
S

I don't really have an issue with the resolution, but I think it's a bad idea mechanically. Halo even has the reticule below the center of the screen because vertical real estate is so valuable, and they're just butchering it.
1

I think it's a cool idea. Will feel like a film.
S

zomgbbqftw said:
I'm up for it. Love movies in scope and if it helps get to 60fps I can live with it.
Click to expand...
it'll certainly make the game more gorgeous, regardless of whether they target frame rate or effects. it also sounds like an interesting concept.
D

Y2Kev said:
I predict many games will be 720p.
Click to expand...
thanks EA
N

zomgbbqftw said:
I'm up for it. Love movies in scope and if it helps get to 60fps I can live with it.
Click to expand...
Given that the game is supposed to look like the graphics in the OP even in gameplay, I'm guessing it's 30 FPS.
P

A worthy trade-off for a true cinematic experience.
D

I have nothing against this. Devs should have a choice in how to showcase their games.

What's next, we will stop tolerating 4:3 indie games?

Hopefully this is just an early generation thing until they can get their engines better optimized.

I think it is pretty dumb to even try to make it sound like a positive though.
B

Good at being the bigger man

This is weird. Why not just render at 1920x800 anamorphic? Just stretch the image out to 1920x1080p. Thats what we've been doing this generation with almost all games.
C

If it works with the game, I'm fine with it. That means the game better be bursting with style, or a "filmic" experience. If this game has this style, then I am okay.

But NO to this being the standard. It should be rare, and only when appropriate (like Beyond Two Souls).

Pretty sure they said in an E3 interview that they did this to make the experience extra cinematic or something. But yeah, that's probably just a rather lame excuse.
M

Xater said:
I think for games that is pretty dumb. In films it makes perfect sense for specific framing, but that argument goes out of the window as soon as you give the player control over the camera.
Click to expand...
This, exactly. Widescreen cutscenes are fine, just as in movies, but the concept of an aspect ratio doesn't really make sense with free camera control.
U

I hated it in Dragon's Dogma (well, i admit after an hour or so of gameplay you tend to forget about it).

As far as it being a standard: If the public doesn't shit on it early on, i can see it becoming a standard to push more effects on screen.
I hope it doesn't stick, personally.

EDIT: Mind you i don't mind experimenting with aspect ratios, but i don't want it to become a standard!
R

I dont understand why developers would want to do this for their movies?I would think they would want to actually take advantage of the new hardware, stuff like this starts to make me think these new consoles are not as powerful as we are being lead to believe.
T

it's times like these I'm thankful for Gamefly
P

If it works it works. We'll see. Ready at Dawn is a good developer so I'll give em the benefit of the doubt for whatever until I see more.
C

I think it's cool.
F

Poetic.Injustice said:
'The feel of 1080p.'
Click to expand...
lol how did this post take so long