The Road to PS5: Official Stream

Give this dude some water..Goddamn.
Click to expand...
Androids do not require.
Reactions: New Yorks Finest

The 10 TF isn't a problem, it's the variable performance. The idea that the system has to lower performance under demanding titles is awful. It's the opposite of what you would want.
Last edited: Mar 18, 2020
Reactions: Godzilla Emu, Gideon_128, Isa and 6 others
F

Apollo Helios said:
36 RDNA2 CUs = 58 PS4 CUs means bigger die than SeX, these CUs on PS5 are extremely customized
Click to expand...
meh:

If Its only got PS4 BC then I'm officially out. I'll be perfectly satisfied being 100% retro.
S 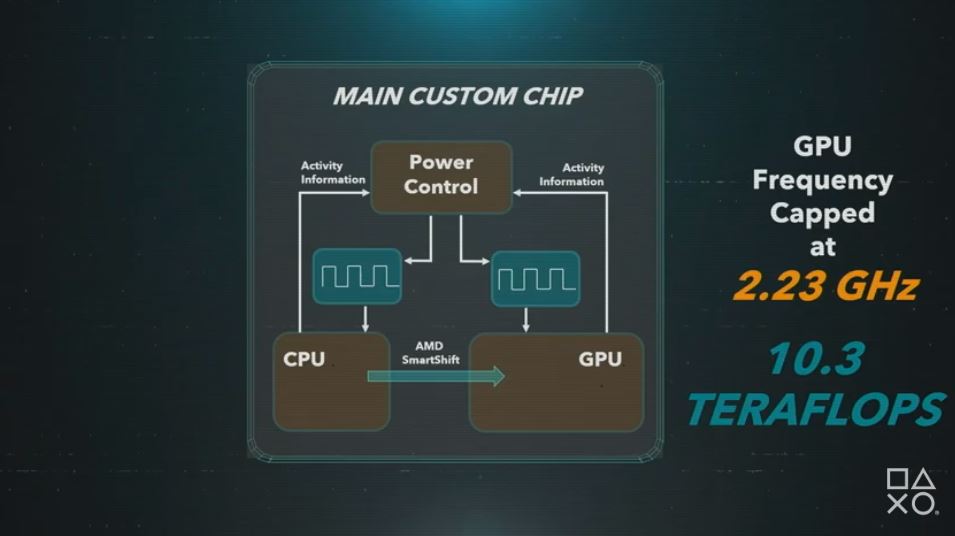 Please someone tell me Sony will gonna have separate show for games. PLEASE!!!
Reactions: Isa

Yea, not too thrilled about the specs except for the SSD.

Maybe it will be $399
Reactions: Gideon_128 and Lawrence ‘Chunk’ Cohen

2.23Ghz is just a peak. Most chance GPU will run at 2 ghz most of the time. 9.2TF basically confirmed.
Reactions: Godzilla Emu and MightySquirrel
A

Not a single Antonio gif to be found on the other site lol
Reactions: Godzilla Emu, Gideon_128, Isa and 2 others

Please someone tell me Sony will gonna have separate show for games. PLEASE!!!
Click to expand...
Nope, they're just gonna release the console next.
Reactions: Somnium, 48086 and Danjin44

Aceofspades said:
I do and especially for @R600

But Im really happy with PS5 specs, it seems like Cerny is betting that small and fast design will perform amazing. I also love SSD improvements.

Also difference is smaller than Xbox vs PS4 last gen . So a win win to me .
Click to expand...
Respect
Reactions: Godzilla Emu, Isa and Aceofspades

Zefah said:
Why should anyone care about what this person has to say?
Click to expand...
He's not wrong.

They waited all this time and allowed hype to build only to show this instead of something tangible.

He just fucking said "the matirix" FFS. I feel like I've traveled back to the time of the PS3 reveal.
Reactions: SotaSkoldier

Click to expand...
Should note that the high speed expandable storage is going to be very specific compatible m2 drives that might not even be available at launch
Reactions: Godzilla Emu and Filippos
F

NorthernSword said:
The 10 TF isn't problem, it's the variable performance. The idea that the system has to lower performance under demanding titles is awful. It's the opposite of what you would want.
Click to expand...
Yup.

But up until now at least, the focus has been on the GPU, where Microsoft has delivered 12 teraflops of compute performance via 3328 shaders allocated to 52 compute units (from 56 in total on silicon, four disabled to increase production yield) running at a sustained, locked 1825MHz. Once again, Microsoft stresses the point that frequencies are consistent on all machines, in all environments. There are no boost clocks with Xbox Series X.
Click to expand...
Reactions: Isa, Godzilla Emu, MightySquirrel and 2 others

Really disappointed so far. 10.3 TF, 820 GB for storage, if I heard that right. I don't give a shit about 3D audio. It's weaker than the Xbox in almost every way. Disappointing.
Last edited: Mar 18, 2020
Reactions: Godzilla Emu

Please someone tell me Sony will gonna have separate show for games. PLEASE!!!
Click to expand...
They made it abundantly clear way in advance that this is a techy deep dive and NOT a sales pitch.

Still, even for a techy deep dive it's dull as dishwater.
Reactions: Isa, Gideon_128 and Tiamat2san

When is the Bloodborne 2 reveal?

Its like what they did with the pro, they talk up a unique feature blike checkerboard rendering and try and make it sound better then it is.
This time they are trying to big up the ssd and sound, while the ssd does look a great feature, the things that really matter are CPU,GPU and RAM.
Reactions: Godzilla Emu
B

I like the emphasis on 3D audio. Still not sold, though.
Reactions: Caffeine

Focusing on VR is a mistake and a waste of money and resources.
Reactions: Isa

caffeware said:
When is the Bloodborne 2 reveal?
Click to expand...
The only thing that can save this right now.

This needs to be significantly cheaper than the XsX
Reactions: Godzilla Emu

StreetsofBeige said:
So far I've got

Tons of stuff about 3D and RT audio
BC with PS4 games
16gb GDDR6
825 SSD at 5.5gb bandwidth
CPU at 3.5 ghz
36CUs at 2.23 ghz
10.3TF
Custom RDNA 2
Ray tracing
Always in boost mode
Something about Geometry Engine and some other fancy engine code name (kind of like PS2 EE)


PS5 DOA. All those insiders were basically BS.
Click to expand...
Let's see how this ages after launch day.

They waited all this time and allowed hype to build only to show this instead of something tangible.

He just fucking said "the matirix" FFS. I feel like I've traveled back to the time of the PS3 reveal.
Click to expand...
We have no way of evaluating whether his statement was true or not. We'll never know. It's just a nonsensical gut reaction. Which is fine and all, but I don't get what dropping his Tweet was meant to accomplish, as if he has some air of legitimacy.
Reactions: Lawrence ‘Chunk’ Cohen

EXTREMELY skeptical by what he said about variable frequency in addition to power consumption. The idea is fine in theory, but you leave it open to interpretation what the base clocks are. Also, I have no doubt, all this overclocking was to get closer to Series X spec. This machine was not designed from the ground up to be this powerful.

I need to see the retail unit and how hot/noisy it runs, not convinced by the pitch so far. Plenty to do from here on Sony.
Reactions: Isa, Godzilla Emu and Filippos

3D audio on PSVR is one of the best features. Those who have not experienced it will be surprised what a difference it makes.
Reactions: Caffeine and DunDunDunpachi
J

Okay this is getting unbearable. Motherfucker the “Ear Canal”?
Reactions: Isa and Gideon_128

I am still waiting for the "best hardware innovation since 20 years" by the way
Reactions: bad guy, Isa, Godzilla Emu and 3 others

Click to expand...
The missing die size on PS5 is telling. If PS5 can sustain high clocks it will be a beast.
A

Entroyp said:
Yea, not too thrilled about the specs except for the SSD.

Maybe it will be $399
Click to expand...
The problem with the SSD I have is, that the xbox ssd is 2.4 GB/s always, while this seems more to be max speed (varible like the other specs).

Yo imma bust out the gary coleman wtf gif in a minute i swear !

ROPs, TMUs, etc all run at high clock rate.
That is great.

But the number of CUs are too little... so the overall TFs are really bad.

Well that machine can't cost more than $399.
Click to expand...
rop and tmu are coupled with cu.

Sony not only lack computational power but also texturing and fillrates.

It will run at 9tflops speed unless you are playing minecraft.

I cant believe how hard Sony failed this round. But console wars are always flipping between leaders.

Click to expand...
Oh shit. Thanks. I didnt think IGN would have a spec sheet already. I was writing them down as I go!

Looks like the only advantage of PS5 is SSD bandwidth at about double the speed of SeX's SSD.

Everything else is worse.

Well, will all come down to price.

If X box matches this you will have a significant performance difference at the same price. They got Quentin Tarantino to sit in their special sound chamber?
Reactions: Godzilla Emu, Radical Dreamer and DunDunDunpachi

"That's a LOT of multiplies!"

Apollo Helios said:
36 RDNA2 CUs
Click to expand...
All that while running at 2.2GHz to keep cost down by making the die as small as possible.
Those clocks are way too high, it's worrisome.

They got Quentin Tarantino to sit in their special sound chamber?
Click to expand...
Sid Shuman
Last edited: Mar 18, 2020

Mista said:
I am still waiting for the "best hardware innovation since 20 years" by the way
Click to expand...
It was the I/O throughput and loading times. You're not going to see games designed with that in mind on PC for a long while.

I feel so old right now. None of this stuff makes sense to me.
Reactions: Xan-Stylo and jonnyp

Click to expand...
and its not at 2.23 GHZ all the time... and its 10.28 MAX. there are times where it goes lower than that.
Reactions: Isa, Godzilla Emu and Caffeine

MightySquirrel said:
PS% will be so much weaker than series x it's really sad.

No way gpu runs at 2,2 ghz for more than a few seconds, more like 1,8 at best, so you're looking at an average of 9 TF to be very very generous.
Click to expand...
It works different that boost on PC cards. It's at max boost until the game gets very demanding at which point it downclocks by 10% or so. Cerny's words.

AV said:
They made it abundantly clear way in advance that this is a techy deep dive and NOT a sales pitch.

Still, even for a techy deep dive it's dull as dishwater.
Click to expand...
yeah this dude is laying on the real hard science, 50% of this is flying over my head.

it is funny to watch that youtube comments feed tho lol
Reactions: Isa and Caffeine
I

Give this dude some water..Goddamn.
Click to expand...
Trying? That guy trying is a system architect. This dude is here for the nerdy talk. Give it a few hours, the Influencers will come in and break it down for the general public.
Last edited: Mar 18, 2020
Reactions: Zefah, Shizumapower and Apollo Helios
You must log in or register to reply here.
Share:
Facebook Twitter Reddit Email Link
Top Bottom