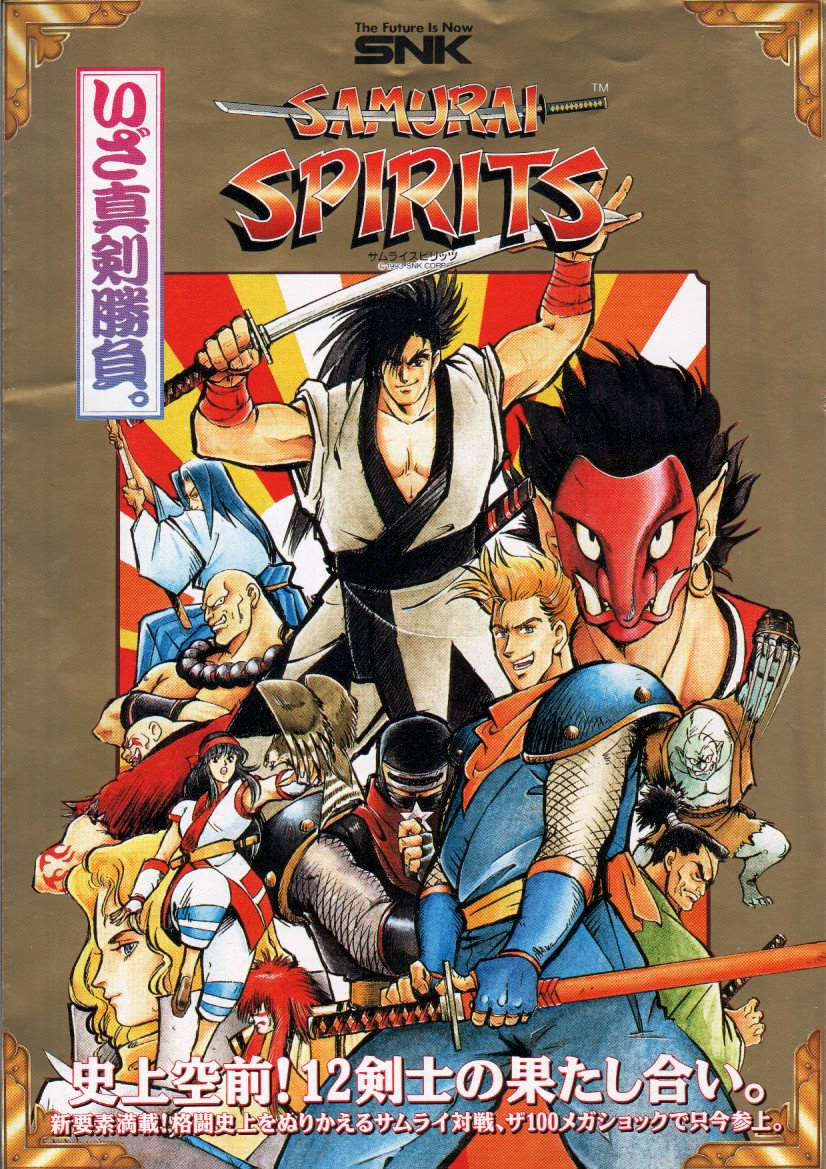 I'm not much of a SamSho fan TBH, and haven't been able to get into any of the games. SNK are currently hiring for a new SamSho and KoF game FYI.

The SamSho games are among SNK's longest running franchises, with a huge cast of wacky and zany characters. Note that the Japanese release of most SamSho games had a subtitle, which may not necessarily have been properly translated into English
...and of course the game would be infamous for it's blood and gore, such that it had various censorships with some releases.
An interesting aspect of the game is how the sequels don't necessarily take place after their predecessors, from Wikipedia, the chronology goes as thus:
SamSho 5/Zero -> SamSho 1-> SamSho 3 -> SamSho 4 -> SamSho 2-> SamSho 64 -> SamSho 64-2 -> SamSho Sen -> PSX SamSho game

SamSho 6 is, IIRC, a dream match game, but from what I heard is jampacked with lots of content gameplay wise. I personally wish that game would get a release on PSN, XBL, etc. =/

Even if I'm not a fan, I am well aware of it's popularity. Happy 20th anniversary Haohmaru and co =)

Oh and here's a list of the SamSho games released, in case anyone's wondering
SamSho 1 was released in 1993
SamSho 2 in 1994
SamSho 3 in 1995 (SNK made tribute to the creator of Rurouni Kenshin by having Shizumaru Hisame resemble Kenshin)
SamSho 4 in 1996
SamSho RPG in 1997
SamSho 64 in 1997 (IIRC the game wasn't well received, it's sequel improved greatly on it)
SamSho 64-2 in 1998 (English release was given subtitle 'Warrior's Rage', in Japan it's Asura Zanmaden)
Samurai Shodown! for NGP in 1998
Samurai Shodown! 2 for NGP in 1999
SamSho Warrior's Rage for PSX in 1999
SamSho V/Samurai Spirits Zero in 2003 (Got an update that vastly improved on this)
SamSho V Special/ SS Zero Special in 2004 (Sadly never got any release outside the Neo Geo, being one of the last games for that formt IIRC)
SamSho 6 in 2005 on the AtomisWave, and then later got a PS2 release in Japan
SamSho Sen in 2008 (I don't care how bad it may be, it has decapitations, that's enough for me to want to play it!)

Nakoruru also got an OVA and an ADV released focusing on her, but I don't think they were very popular or good?

Note that the PSX SamSho game is available on JPN PSN if anyone's interested.
Most of the SamSho games should also be available on the Wii IIRC.
There are 2 animated features for the series, but good luck finding the first anime OVA in Japanese+Eng. subtitles. The 2nd animated series was a 2 ep. OVA based on SamSho 64-2...could've gone with some more action scenes TBH...

BTW anyone able to find an image of SamSho 1's map that apparently does not acknowledge the existence of the American continents? Its a good series but I always preferred Last Blade.


Tizoc said:
I'm not much of a SamSho fan TBH, and haven't been able to get into any of the games. Word is SNK is working on a new SamSho game, which may get a Next Gen release.
Click to expand...

Actually, the word is that SNK is hiring 25 staff with 3D experience on the PS360 for the next King of Fighters and Samurai Shodown.

I love the Samurai Showdown series. For years Samurai Showdown 2 was my favorite SNK fighter and I still consider it part of the holy SNK trinity along with Last Blade 2 and Mark of the Wolves.
J

Still waiting on Samurai Spirits RPG to be translated into English.

It is, but sadly that was also kind of the last time this franchise was relevant.
S

It's now on iOS and Android. It's compatible with iCade. Brutally tough game, but I love it.
A

ArjanN said:
It is, but sadly that was also kind of the last time this franchise was relevant.
Click to expand...

20 years and the first two games are still the best by far. What once was a favorite franchise of mine is now a bottom of the barrel turd. I can't celebrate this franchise, it doesn't deserve it.

Pretty sure there's a SamSho RPG fantranslation....at least for the NGCD ver.


BadWolf said:
Its a good series but I always preferred Last Blade.

Actually, the word is that SNK is hiring 25 staff with 3D experience on the PS360 for the next King of Fighters and Samurai Shodown.

Fixed, thanks for the info =)
S

Pretty sure every budding gamer who ever stepped in to an arcade during the 90s was impressed by what they saw at a Samurai Shodown cabinet.
A

The series went to shit once they started with the 3d games.

Atolm said:
The series went to shit once they started with the 3d games.
Click to expand...

samurai showdown 64 2 was actually pretty good. It was the big competitive at the arcade in my community college. I remember the arcade operator left the it unlocked so I turned it on free play and we had like two days of free games before they caught on. Nakoruru was a little op but most of the cast was still pretty damn competitive and fun to play. My personal favorite is still IV though.

Hmm you sure non of you guys tried SamSho Zero Special? I keep hearing how it's good; there are various 'subsystems' and each character has 1 super now for simplicity's sake.
S

Which is the best version of Anthology, PS2 or Wii?
T

Tizoc said:
Hmm you sure non of you guys tried SamSho Zero Special? I keep hearing how it's good; there are various 'subsystems' and each character has 1 super now for simplicity's sake.
Click to expand...

0 Special is probably the best 2D SS that isn't 2. It helps that 0 was a great starting point to make a better iteration. And should be played just to understand why the changes in Special were made and Poppy!

0 did a great job of trimming the fat so to speak with the "elimination" of Slash & Bust. But either the character in question became a combination of both, a whole new character emerged from it or in some cases a character lost a bit of both for balance sake.

When it comes to subsystems in 0/0 Special they have a cool ebb & flow to them.

The thing is that Rage & Mediation play off of each other. You can only meditate if you have Rage Energy but not a full bar or during a Rage Burst. Meditation allows you to use Concentration 1 earlier than normal (more important in 0 than in Special because when you can activate Concentration 1 is a lot sooner). Factor in that characters either can gain Rage Meter quicker or Mediate for an easier way to activate Concentration 1 adds another wrinkle in character choice and battle plans.

Explanation blurb aside is that 0 Special is an awesome fighter that more should try. I do wonder what was the deal with Final Edition and why a port of 0 Special never happened but promised multiple times.


sixteen-bit said:
Which is the best version of Anthology, PS2 or Wii?
Click to expand...

As far as I can tell there isn't a difference in emulation quality.

The Wii Version adds some Mini Games but the PS2 version doesn't have that "Press The + Button" replacing Press Start Button in games.

So play it on whatever system is comfortable to you.
U

For competitive play nothing beats Samurai Shodown 3. The game has it's balance and hitbox issues but nothing touches the pure joy of high level play as SS3 does. High speed play, a decent size cast which is made even larger with the use of Bust and Slash variants, and some of the best backgrounds and music in the series put it a cut above the rest. There is a "fixed" version of the game that corrects the major hitbox issues with most of the main characters that is widely considered the best version to play. Having played SS3 for over 4 hours this weekend with another high level player, I can say that there are still some hitbox issues with the title. I see a lot of complaints about air blocking in SS3 but those people have no idea what they are talking about. Air blocking only works at a certain height off the ground so if you know where that cutoff is you can uppercut jumpers all day.

A lot of people prefer SS4 but the dial a combo system, worse backgrounds, and double healthbar make the game a pass for me.

Samurai Showdown 5 Special is a great game that would be made fantastic if it played at the speed of 3. As of now the game is incredibly slow and high level play suffers because of it. If both players know what they are doing, matches can go on for quite a while due to how slow SS5SP is. Best analogy I can make is the difference of play from Street Fighter Alpha 2 to Alpha 3. Alpha 3 is still a good game but the fact that the gameplay speed feels like you are moving through syrup diminish the fun factor.
M

This year we also celebrate of 20th anniversary of fake button mashing minigame.
U

Only the single player version did not matter; the number of presses in the MP did matter.
G

This lil' bastard right here was my man. The liquor store near my high school had a samsho2 machine and I probably missed the bus a few times putting quarters into it. Played 3 for a while and didn't pick up the series again as Street Fighter III had by then taken over the fighting world.
S

Samurai Shodown 2 was one of the greatest Fighters ever made. Haohmaru & Sieger all day, errday.

Samsho 4 was pretty good and fun for a year, Sogetsu & Tam Tam, all day, errday.

3 and the 3D ones were excreble hot mess, though. Not a series that had a dignified end.
A

Fantastic series, I wish there were arcades where I leave and with the energy from those good old days and defeat some fools.

Love Samurai Shodown. Played the hell out of it when I was younger. Probably still my favorite fighting franchise. Shame about Edge of Destiny, that one was horseshit.
Come on SNK, give SamSho some love.

Mained Nakoruru btw
You must log in or register to reply here.