Those bomb things in Mario Kart 64 are SO fucking annoying

Like seriously, what the hell is up with these little shits? 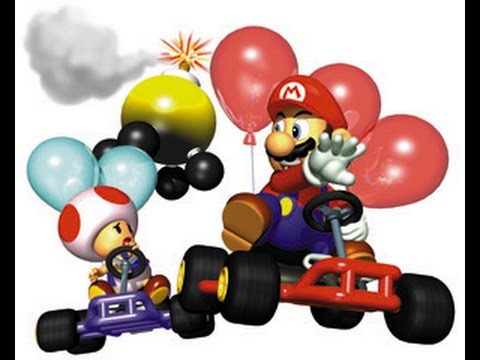 The thing behind Mario and Toad. Fuck that thing.

For whatever reason, Nintendo decided to scatter these things all around the maps in MK64's multiplayer. Whenever I play the game with a friend of mine, I always crash into them and they always screw me up. To be fair, they're not that hard to avoid. You can even jump over them. But they're always in the fucking way and sometimes it's just hard to not crash into them.

Why are they in this game? They're nothing but a hinderance. To my knowledge, they're not in any of the other Mario Kart games and there's nothing like this in other N64 racers like Diddy Kong Racing. There's not even an option to turn them off! Why Nintendo? Why?!

Seriously. I can't be the only one who hates these things, right? Bleh.

I can almost forgive them for the ability to get revenge from beyond the grave in battle mode as one.
N

I love them
Reactions: Heimdall_Xtreme and Lawrence ‘Chunk’ Cohen

Maybe they're just, like, going about their fuckin' day man. Jeez.
J

Yeah i don't like them either. Only appeared in 3/4 player races right?
N

They're super fun to drive.
D

Jonneh3003 said:
Yeah i don't like them either. Only appeared in 3/4 player races right?
Click to expand...
Nope. They're also in 2 player.

64's Battle mode was the best thanks to players being able to control those bombs after losing all balloons. You best show respect.
N

FUNKNOWN iXi said:
64's Battle mode was the best thanks to players being able to control those bombs after losing all balloons. You best show respect.
Click to expand...
Yep, as a younger more inept brother these things gave me an infinite amount of joy I otherwise wouldn't have had.
J

daTRUballin said:
Nope. They're also in 2 player.
Click to expand...
Huh I can't remember them showing up with just two players. Either way they just interrupt the racing.

I think a few people are mistaking this for the driveable bomb karts in battle mode, this isn't that.
P

I really don't remember these things that well. I always thought they were just things you could control if people were still playing battle mode and you lost, but I only ever had two controllers so I don't remember doing that even.

FUNKNOWN iXi said:
64's Battle mode was the best thanks to players being able to control those bombs after losing all balloons. You best show respect.
Click to expand...
N64's was the best because the green shells would bounce around forever unless you just despawned them with too many green shells at once. Block Fort will never be the same in any remake as long as they keep on having the green shells break right away.

Thinking about it, did any of the other Battle Modes let you take away a person's balloon if you weighed more than them and crashed into them? That was another thing you could trip people up with at the start of Block Fort.
D

Jonneh3003 said:
Huh I can't remember them showing up with just two players. Either way they just interrupt the racing.

I'll admit that the bombs were pretty good in battle mode lol. But that's the only thing they're good for in that game.
H

For battle they were great. I think it's a missed opportunity to not include a survival-style balloon battle (in what, the last 4 Mario Kart's?). Having defeated players turn into bombs was a noble solution.
Y

You Pay This Much

I think the only dumb part is that there's not an option to turn them off.

I actually completely forgot these things were in versus, just zig-zagging around. We mostly played 2-player GP or 4-player battle mode.

Now I vaguely recall getting hit by a shell and landing right on the path of one those things. One of the first times I got Mario Kart'd I guess, lol
T

Note: Removes the yellow bombs from the racetrack during multiplayer races
T

Note: Removes the yellow bombs from the racetrack during multiplayer races
Click to expand...
opps..

Made a mistake where they were just invisible.. Here is good code.

Note: Removes the yellow bombs from the racetrack during multiplayer races

Are the other racers removed from 2P races?

I was thinking these were added into 3 and 4P races as a way to keep things interesting without the other four/five racers present....I dunno, been a minute.