Total War: Rome 2 is the latest installment in the Total War franchise following 2011's Shogun 2, and a direct sequel to the original Rome: Total War released in 2004. Total War games consist of two distinct parts: a turn based campaign map similar to 4X games, and real time (with pause) battles where you control large units. A typical campaign will have you managing the growth of your empire, engaging in real time battles to conquer settlements, negotiating with other nations to leverage trade and military alliances, and using agents to covertly manipulate other nations when necessary. The campaign begins in 272BC and goes for 300 years, although the game will not necessarily end at that point.

Rome 2 is said to be the biggest Total War game in terms of budget, with apparently double the amount of staff working on it relative to past entries in the franchise.

If you haven't played a Total War game before, there's a robust tutorial as well as a 2-3 hour introductory campaign to ease the learning curve. Creative Assembly also has a guide on their official wiki. Zevrow on Youtube also put together all of the released tutorial videos from CA into one video. 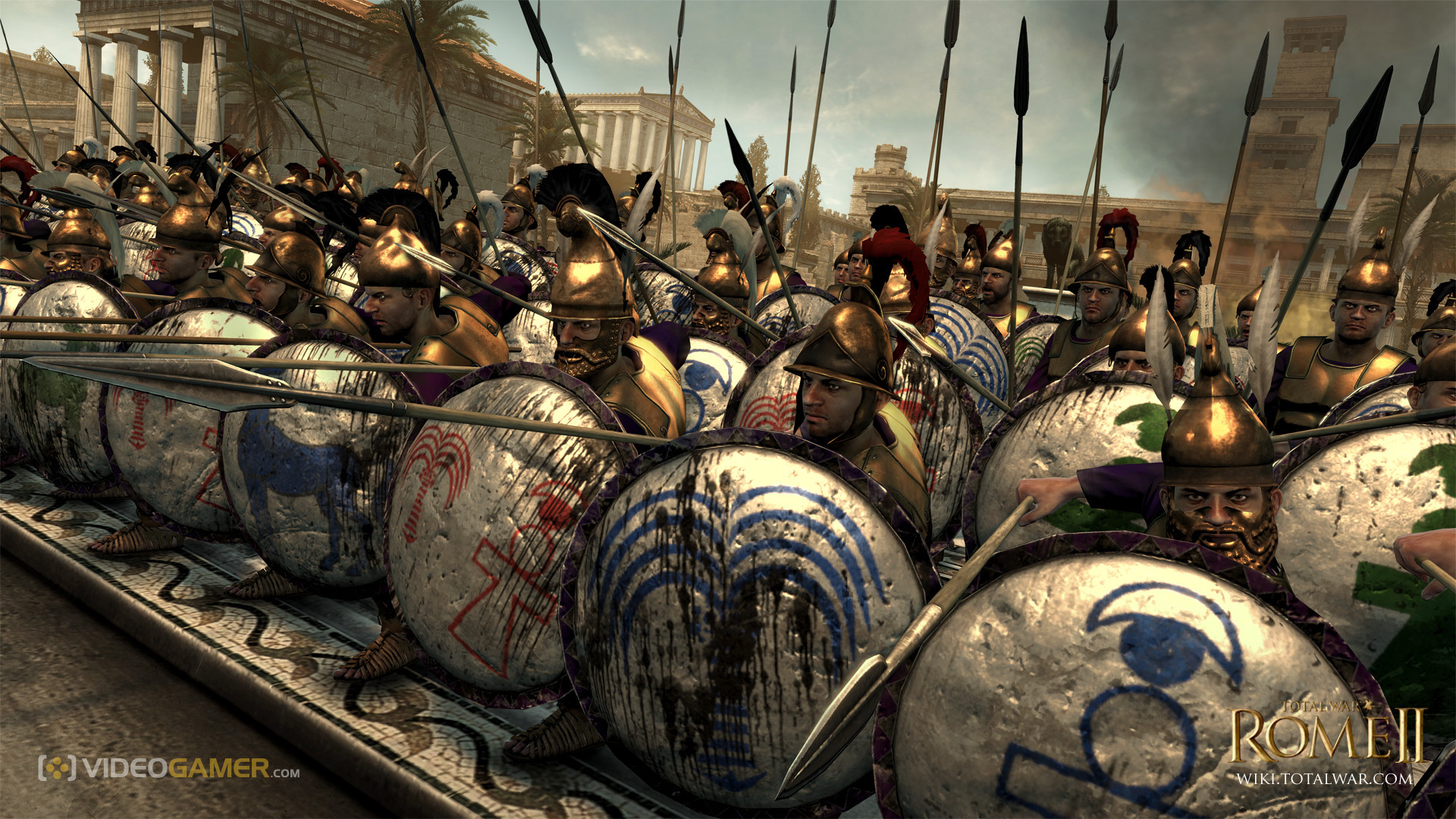 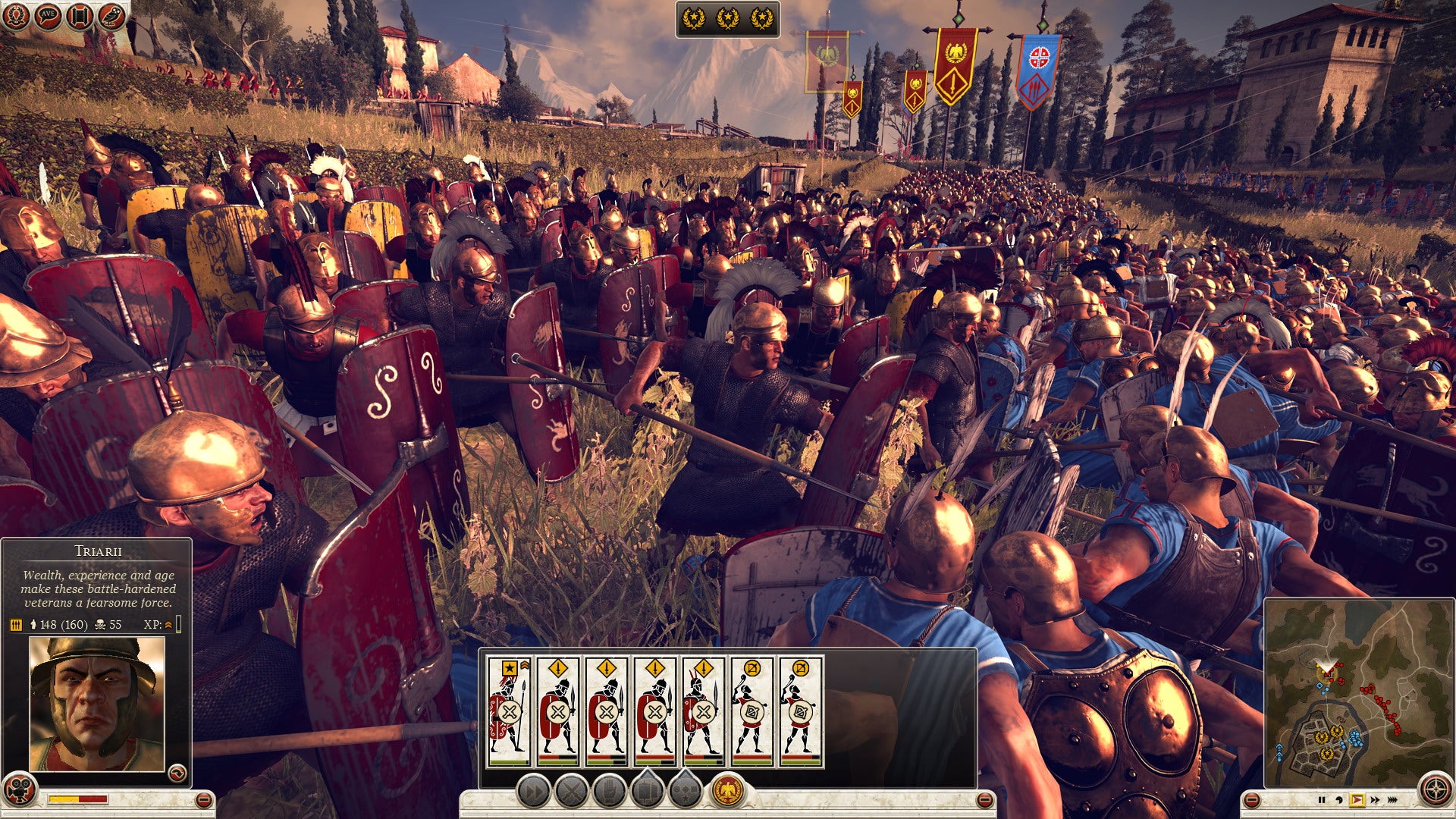 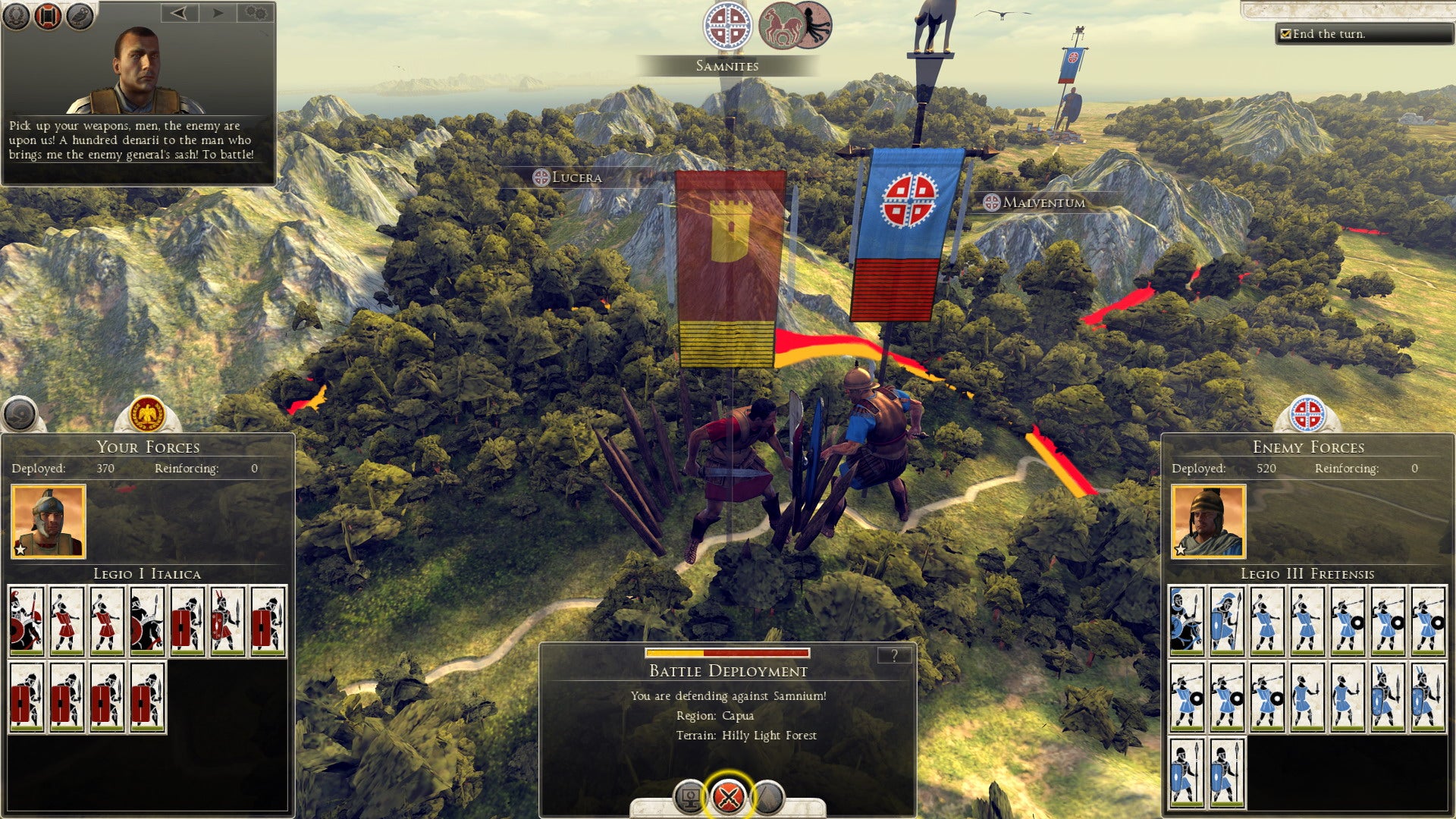 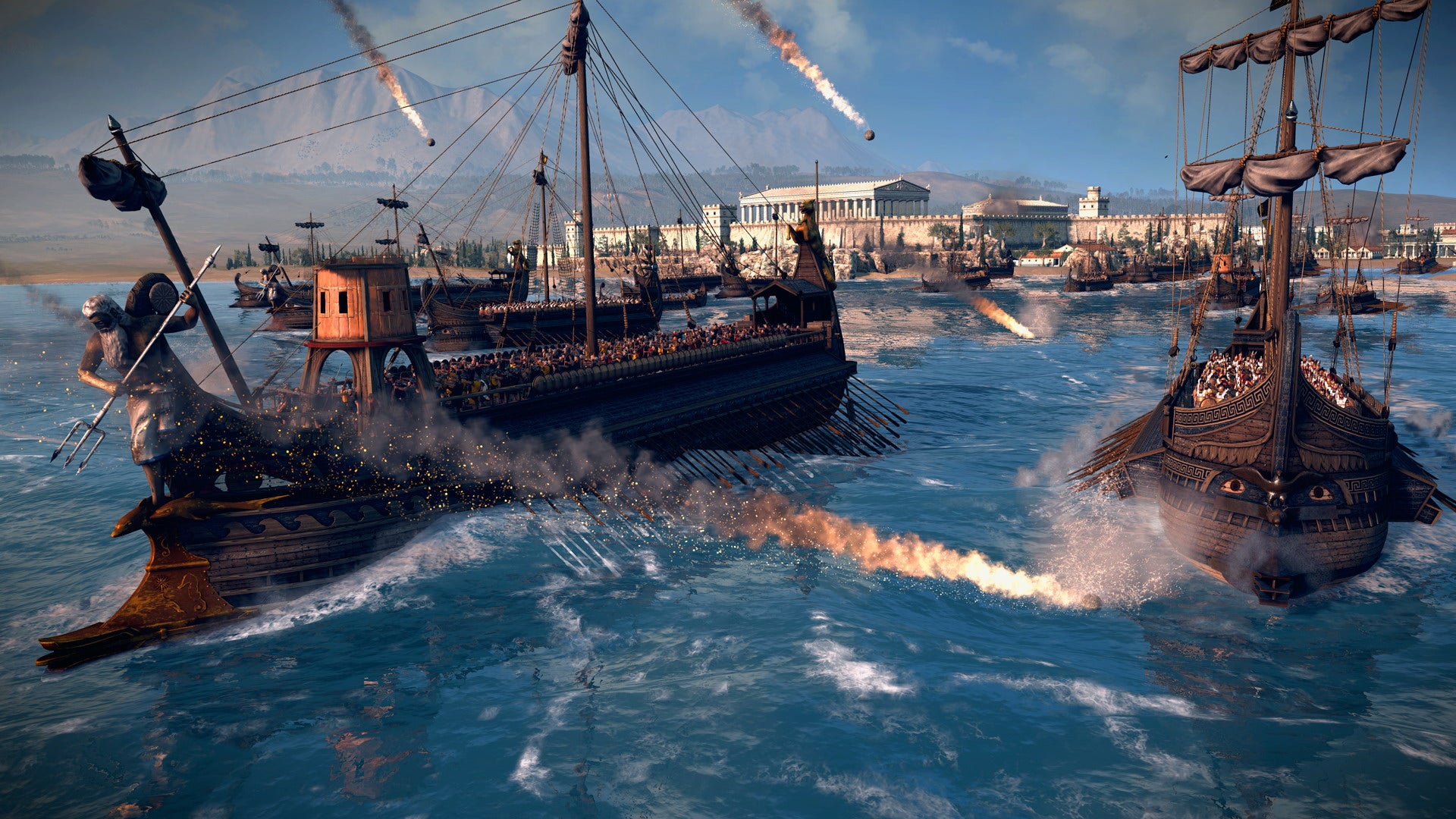 If Rome II were a gladiator, it would enter the arena as pyrotechnics flared and trumpets blared. Clad in the most beautiful armour in creation, it is the promised one, destined for greatness. Later in the day, having overcome many opponents, it would finally fall, its final opponent holding a sword to its throat. Watching on, only a very cruel emperor would point his thumb murder-wards. It deserves its victories but it&#8217;s hard not to think that if the armour it wore were less ornate, lighter and more flexible, then it may never have fallen at all.
Click to expand...

There's something here for everyone, whether you dream of commanding armies, or using espionage and politics, to crush your enemies. It could be more welcoming to new players - and you'll need to invest a significant amount of time to understand all of its intricacies - but get past that and you'll find a deep, rewarding game that brings history to life in an incredible way.
Click to expand...

Right now, Rome 2 has its flaws, but is still a sumptuous, slow-burn strategy game with some of the best land battles in the series. Aesthetically, it&#8217;s a triumph. Empire management, alliances, the UI and battlefields have all improved, which makes it doubly frustrating to encounter the floppy AI that will be extremely familiar to Total War fans by now. Still, nothing out there does what Total War does with this degree of scope and detail. I&#8217;d still recommend it to armchair generals anywhere.
Click to expand...

First OT so go easy on me.
Big thanks to Quick for doing the graphics! Thanks to Guerillas In The Mist for the OT title as well.
B

Can't wait for this.

So ready for this.

My PC is not ready.
B

That title is straight jokes
J

I have fallen seriously out of love with the Total War series over recent years, but this looks to have implemented some really interesting new concepts. Love the limitations on the armies you can field and the introduction of regional capitals.

Given the original is one of my favorite games of all time, will have to grab this one methinks.
A

Can't wait for this game, have it preloaded and everything.

With that said i haven't been keeping to close an eye on it so most of the stuff in the what's new section is news to me. I like what i am hearing as it sounds like they are adding some much needed depth to it.

The AI stuff still cracks me up. Every Total War game is said to have improved AI and every time the people who complain about the AI yell "you lied." when the game is released. I doubt Rome 2 will be any exception.
H

Can't wait to unleash my wraith on them barbarian Gaul

Its been too long.
S

Great OT. Love the tagline. Just reminded me I still need to pre-order this.

edit: this is why I built my new PC, lol
D

Thanks for making an OT! I was worried no-one would bother for a while there

This reminded me... Preloading time!!!

Thank you GMG for providing a discount, otherwise I never buy a Creative Assembly product at launch. Too buggy.
H

Sooo excited! CE just arrived, kind of surprised to see 3 install disks, must have been awhile since I bought retail PC...
I'm guessing since it's on Steam we're locked out till release?
S

Thank you GMG for providing a discount, otherwise I never buy a Creative Assembly product at launch. Too buggy.
Click to expand...

Preload is up? GMG actually got keys before launch?
L

Preload is up at 9.9 gigs. Nuuvem and GMG have apparently been distributing keys already.
T

Haven't put any serious time in any TW game since Medieval 2, then again, I can count the games that I put as much time in as ME 2 in one hand.
A

I got my keys from Green Man Gaming 2 days ago apparently, but didn't notice until today.
H

Great OT
really hyped for this been playing a lot of Rome total war in preparation for this
Some leaked gameplay footage - Rome VS Macedon siege
http://www.youtube.com/watch?v=I9K2_6I4-L4
J

Will you be able to grab the Greek Factions DLC later, or is that exclusively for pre-orders?
L

JoV said:
Will you be able to grab the Greek Factions DLC later, or is that exclusively for pre-orders?
Click to expand...

It's on the Steam store here, but no price yet.
A

Good job with the OT! I'm glad someone finally did it. Just a heads up, though. Your faction emblem for Macedon is showing the emblem for the Arverni.

Have they said if all the factions will be available from the get-go? If so, what factions are everyone planning on starting with? I'm torn between Rome and the Suebi.
J

Lingitiz said:
It's on the Steam store here, but no price yet.
Click to expand...

Excellent, many thanks.
E

Number one reason I want to upgrade my pc.
D

Hamlet said:
Great OT
really hyped for this been playing a lot of Rome total war in preparation for this
Some leaked gameplay footage - Rome VS Macedon siege
http://www.youtube.com/watch?v=I9K2_6I4-L4
Click to expand...

Man, I thought that was Rome 1 for a second. Must be the lowest settings possible.
T

Super excited for this! Nice OT!

I am slightly worried that it'll suffer from ridiculously long load times like Shogun 2 did until very recently. (Not sure when but they eventually sped up the load times when using DX11). That said, I suppose now would be a good time for me to pick up a SSD.

Guys that want to play some multiplayer add me on Steam: TakenBr
N

Here is the GOTY.
V

Yes, and yes. GMG sent the keys 2 days ago. Not sure when preload started as I only used them today when I saw this OT.
Z

How big is the preload? The requirements say 30GB HDD space required. Assume this is once its installed, not the actual download size. Stupid bandwidth cap :|

my only problem with the game is that they didn't put the Aitolian League and the Achaean League. Also the focus on Suebi and Iceni that only have any major shit on the Imperial time too.

Taking this out, this is my GOTY right here.

Zushin said:
How big is the preload? The requirements say 30GB HDD space required. Assume this is once its installed, not the actual download size. Stupid bandwidth cap :|
Click to expand...

The die is cast.
P

So excited for this game. Already got it preloaded. My body is ready. My enemies are not.

Does anyone know if there is a review embargo and if so, when will it lift?
D

GMG is the cheapest legit place to get this now, right? Don't suppose there are any codes around that make it cheaper? It's already 19% off.
M

does the game have an Illyrian faction?
T

Zefah said:
GMG is the cheapest legit place to get this now, right? Don't suppose there are any codes around that make it cheaper? It's already 19% off.
Click to expand...

Ten minutes ago it was $35 on Nuuvem. Now? Yeah, I think GMG is the cheapest.
S

Probably going to jump in first with Rome or Carthage. It's a really hard call to make, I'm a huge history fan of both :x
C

Do people here use the pause function during battle? I always feel bad using it so I try not to. Hope they release a blood dlc down the line and for free, added a lot to the Shogun 2 battles in terms of impact.
L

Fellow RTW purists, we have waited a many turns for this day.

It is upon us!

ricochetguro said:
Do people here use the pause function during battle?
Click to expand...

I always do. The AI can perform over 10 actions a second. By pausing and issuing commands I even the field.
M

I'm really curious to try this game. But knowing Creative Assembly I'll probably just wait a month or two for them to patch it first.
S

Give me Titus Pullo and lucius vorenus DLC

http://www.youtube.com/watch?v=pj8yq_urL5c
You must log in or register to reply here.

Vasto replied
Feb 18, 2022
Brigandine: The Legend of Runersia coming to PC on May 11