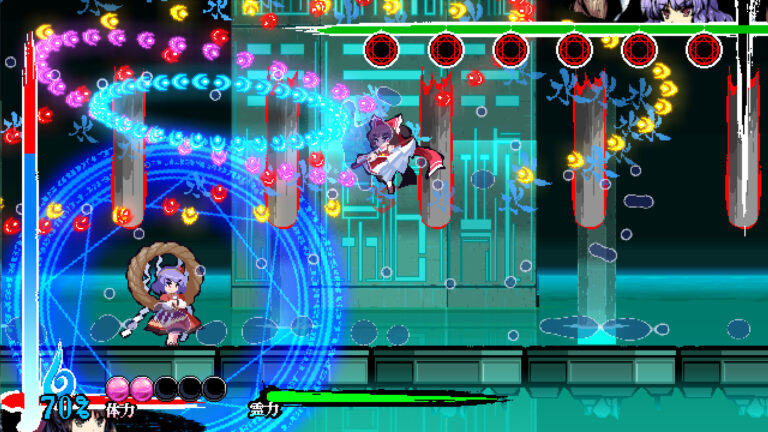 The player controls the heroes as they pursue the mystery of the strange phenomenon that has occurred, overcome the enemies that stand in their way, and head for the abyss.

Turn the thick, difficult-to-evade barrage of bullets unleashed by the enemy into water and slip through their attacks, and use the water to unleash powerful attack “Spell Cards” to win the fight!

If you get a Game Over, you can start over from the beginning of the stage.

Black water gushed out from the ground. It gave off a stench that was not easy to shed once it touched the body. It was by no means water meant for daily use.

Some saw the black water that gushed forth as misfortune, while others saw it as a good fortune; some as holy, some as evil, some as a calamity, and some as a means of financial prosperity. With various theories in the air, there were even some festivities among them.
However, an incident occurred that sent a chill down the spines of those in high spirits. From springs for drinking water to beautiful clear-water streams and hot springs meant for relaxation, black water began to gush forth…

Watch a trailer for the Switch version below.

That title is quite a mouthful, lol.
G

NeoIkaruGAF said:
That title is quite a mouthful, lol.
Click to expand...

That's every Japanese title ever.

So it's a 2D action 1v1 with bullet hell attacks and parry mechanics? Looks cool, might be great on the Switch.

Looks like a Smash-like but with Touhou characters.
You must log in or register to reply here.