This game is pretty good, but if only it had stealth takedowns and quick-time events, then it would be perfect.
D

Jazzkokehead said:
Seeing as he just announced Poweslave EX, I wouldn't hold your breath. He seems incapable of finishing one thing before he moves onto another.
Click to expand...
It's not a matter of him having a short attention span or whatever, it's to do with the fact that he's being paid to remake/remaster games by other people. He worked on the official Strife re-release for Night Dive and he's doing the same for Powerslave/Exhumed.
S

He's also implied there's a good reason why he's stopped working on TurokEX right now. Given the context - a comments section on one of his PowerSlaveEX updates - it's fair to say PowerSlaveEX isn't the reason why (I mean, if it was, he'd just say "I'm not doing it because I'm busy with PowerSlaveEX", surely).
C

Wow, these are memories I hardly knew I had. Coming straight from the Super NES into playing Turok was like playing the game children of the '90s dreamed about before going to sleep.

You fight a cyborg T-Rex, and ya'll are complaining about fog.
C

Jazzkokehead said:
This game is pretty good, but if only it had stealth takedowns and quick-time events, then it would be perfect.
Click to expand...
Hahahhahahaah, oh good one!
J

If anyone ever asks you to explain why Turok is a good game, just show them this picture. I mean, look at it - it's a goddamn bionic dinosaur with a gun for an arm. Says all you need to know, really.

N64 was so blurry and drab it never occurred to me until years later that it was in fact more powerful than PS1.
D

Lettuce said:
Here ya go, not quite sure what you were after but hope there ok....
Click to expand...
Thx for those screens. Perfect for the comparison.
I recorded some 60fps footage. Which oddly enough... due to the youtube upload is somehow 59 fps?
Z

Shadow Hog said:
It's pretty terrible, but it's also masking the fact that the level geometry loops around on itself in inherently unrealistic ways. Like, there's probably another canyon directly above Turok's head at any given moment, which is obscured by the fog but would look hilarious without it.
Click to expand...
Any video, pic or way to see this? it sounds amazing, pretty cool way of making huge levels in the older hardware.
A

trying to get banned with edgy takes, to earn anti-GAF cred. Keep posting Kylo, it warms our hearts.

This just reminded me that I'd love to see a remastered Seeds of Evil. Game had such great atmosphere and music(and the cerebral bore).
C

I paid $130 AUD for Turok on N64 when it came out. That was almost how much I used to earn in a whole week back then, no regrets. I got my money's worth out of it.
D

I am on level 6. I am being destroyed and my stomach is in a knot from being nervous. It is fantastic.
G

The N64 original of this game had the most badass control scheme.
N

I don't know if if was this of Turok 2 but I remember the weapon reload animations being mind blowing for the time. Not sure if PC FPs' were as good or better but since I didn't have exposure to any PC gaming at the time the nearest comp was Doom 64 and this felt like a complete generation ahead from that standpoint. Unfortunately I remember not liking the gameplay too much, specifically in Turok 1.
D

Ninja Scooter said:
I don't know if if was this of Turok 2 but I remember the weapon reload animations being mind blowing for the time. Not sure if PC FPs' were as good or better but since I didn't have exposure to any PC gaming at the time the nearest comp was Doom 64 and this felt like a complete generation ahead from that standpoint. Unfortunately I remember not liking the gameplay too much, specifically in Turok 1.
Click to expand...
THe deploy and "reload" animations are generally really great yeah.

Just beat the game and had a hilarious last level animation glitch on Turok. Those 2 end bosses were awesome.

Any chance that Turok 1 and 2 make an appearance on the N64 Virtual Console on Wii U? Who owns the licence to the games now?
D

OrochiJR said:
Any chance that Turok 1 and 2 make an appearance on the N64 Virtual Console on Wii U? Who owns the licence to the games now?
Click to expand...
I think no one does. Aren't both games and the IP abandonware at this point? Maybe I am mistaken though.
C

OrochiJR said:
Any chance that Turok 1 and 2 make an appearance on the N64 Virtual Console on Wii U? Who owns the licence to the games now?
Click to expand...
http://www.neogaf.com/forum/showthread.php?t=866309

Classic Media expressed interest in releasing the games on virtual console last august if there was enough demand for it.
T

cyberheater said:
How does Turok 2 run?
Click to expand...
Artex said:
I would love to play Turok 2 again. I don't have the cartridge anymore, don't know what happened to it.
Click to expand...
Leafhopper said:
Turok 2 Seeds of Evil is one of the best shooters ever made.

That said playing any of the N64 games at 60 FPS sounds amazing, considering 2 could barely keep it's framerate steady went action was happening.
Click to expand...
So guys. The FPS tweak also works with Turok 2 on PC. 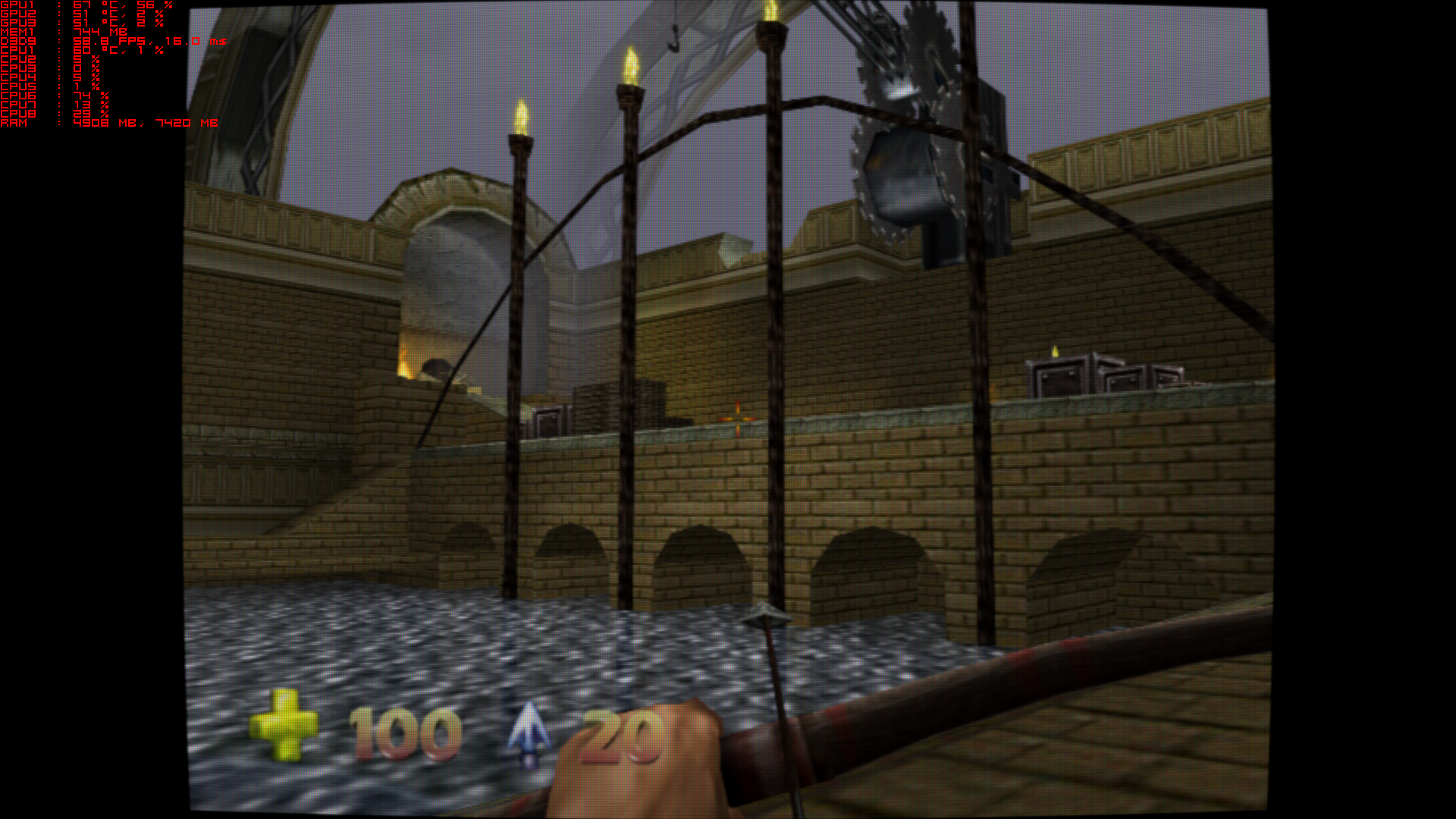 I thought that basically every N64 game went berserk if you tried to emulate it at 60FPS?
D

border said:
I thought that basically every N64 game went berserk if you tried to emulate it at 60FPS?
Click to expand...
I am running the PC version and just emulating the look of the N64 version. The problem was in the past that the PC version ran rather poorly no matter what you did. Now you can run it at 60 fps --- and it is not sped up.
J

"Child rescued" my ass. That's no child - that's the face of the Antichrist.

Zuhzuhzombie!! said:
Now that's a term I haven't heard in a long time. Long time.
Click to expand...
Glide's lighting and effects are too powerful for us weak non-planeswalking-mortals: 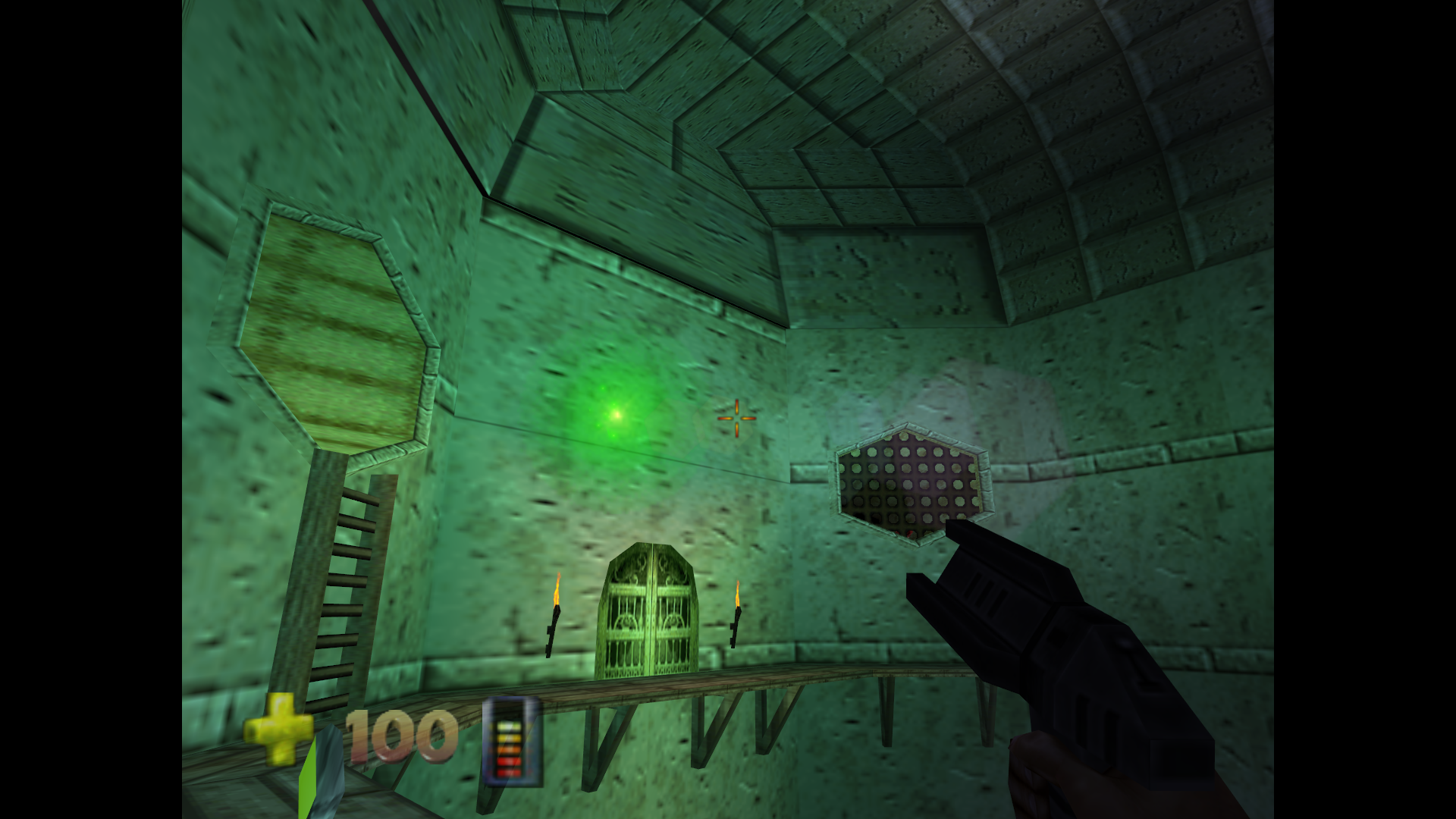 Did Turok 3 ever come out on PC?

there´s no fps with lives like Turok 1 and 2 anymore...
L

Dictator93 said:
So guys. The FPS tweak also works with Turok 2 on PC.

Lettuce said:
Did Turok 3 ever come out on PC?
Click to expand...
It did not. Which is a bit strange - watching videos of Turok 3 now, the game is obviously heavily inspired by Half-Life... so you'd think it would fit in perfectly among other PC shooters.

I replayed the first Turok game over the past week (for the first time in many, many years), and I had a blast. Sure, there's a lot you can criticize it for - the heavy fog obscures anything not in your immediate vicinity, there are far, far too many instant-death platforming sections over bottomless pits, checkpoints are few and far between, and the size and complexity of the levels tends to be incredibly confusing, proving that bigger does not always equal better.

And yet.. for all these complaints, I ended up playing the game to completion. Even taking these aforementioned problems into account, there's still so much to like about it. The game is just a ton of fun to play. You're given a huge arsenal of weapons, which all look and sound great, feel powerful, and are fun to use. There's a huge range of enemies to fight against, ranging from regular humans, aliens, to goddamn bionic dinosaurs. Their animations are all fluid, particularly the gory and exaggerated death animations. The controls - though they take a bit of time to adjust to - are quick and responsive. And the action is incredibly fast and frantic, pitting you against huge hordes of tough foes, comparable to any contemporary PC FPS - strange to think that this is a game that was developed primarily for, and debuted on a console!

Maybe my love of old-school, arcade-style shooters like Doom, Quake, and Duke Nukem biased me towards the game, but all the same, I had an incredible amount of fun with Turok.

Anyway, with the first Turok done, I suppose it's time to move onto the sequel...

Barkley's Justice said:
N64 was so blurry and drab it never occurred to me until years later that it was in fact more powerful than PS1.
Click to expand...
Something something wobbly textures. This ain't the thread
D

Lettuce said:
Videos of Turok 2 please.
Click to expand...
expect some this afternoon! With or without the CRT filter?
I

Dynamite Ringo Matsuri said:
Daaaannggg good ol' Iguana. Didn't a lot of these guys go on to become the Retro Studios we all love?
Click to expand...
many key people from iguana DID leave to go work at retro studios.
don't know how many of them are still there anymore. that would be interesting to research.

however, Andy Schwalenberg who was part of the core Turok team, worked as a designer on Turok 2, and was one of the lead designers for Turok 3. he still works at retro studios.

Oh man I absolutely loved the N64 Turok games. 1 and 2 always get all the love but I really enjoyed Turok 3 as well, and Rage Wars was kinda fun.
N

The most I've ever spent on a game. Launch day as well. Didn't this come out a few days after the N64 in the UK?

The N64 came out on the Saturday and I'm sure this came out the week after?
D