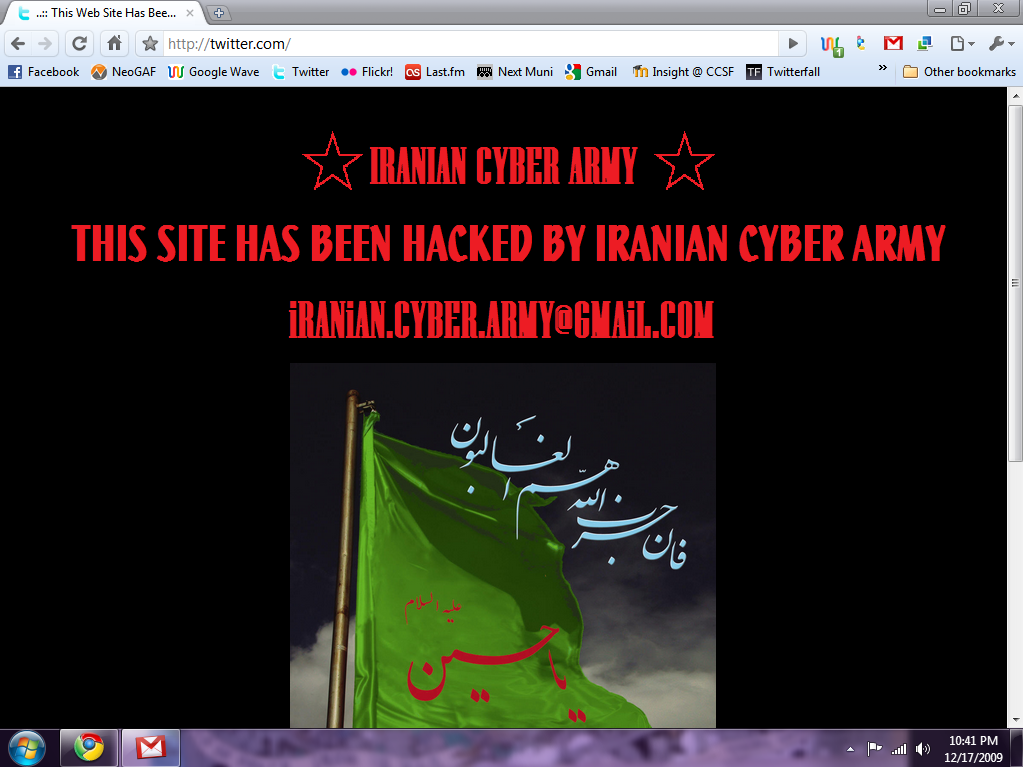 This is what i'm seeing when I go to twitter.com. What's goin on?
D

The server at twitter.com is taking too long to respond.
Click to expand...

try sending an email to the Iranian cyber army. I bet they know whats up.

That red swoop on that flag looks like a dribbling penis with a ballsack.

Twitter's been down for a hwhile.
S

I wonder which cyber army did this? Weird.
M

i still can't get it to come up.
S

So is this 'Iranian Cyber Army' a bunch of Iranian dissidents or Iranian government? Or neither?

Weve received multiple tips right around 10 pm that Twitter was hacked and defaced with the message below. The site is currently offline. Were looking into this and waiting on a response from Twitter.

Update:  We have just found out that the same defacement is appearing at at least one other site, mawjcamp.org. We are not able to see what was at this domain before, but it is now displaying the same defacement that Twitter was only a few minutes ago.

Twitter does not have the best record with security issues. We have previously covered a number of incidents, and as recently as two months ago their web servers were misconfigured to reveal detailed internal network information. We also previously wrote about their admin interface having a password of password on one account, and the well-known Twitter doc incident. It was hoped that with the hiring of a new COO, Dick Costolo, as well as a number of other high-level engineers, including security experts, that Twitter had grown out of the phase of being vulnerable to security incidents on such a large scale.

We do not know a lot about the group claiming responsibility for the attack as we havent heard their name before and they do not show up in any defacement mirrors or security sites. Similar Iranian groups were active during the election campaign in that country. We have emailed the group (they were kind enough to leave an address on the defacement) for a comment (also added them on Gchat  worth a shot).

Update II: Twitter.com is down, status.twitter.com is down (not useful, perhaps they should host it at blogger). Some tweets are getting through at the moment because parts of the API are up. Search also seems to be working. The Firehose is up  Tweets are coming in from FriendFeed (all those tweets about is twitter down are from third-party sites)

Update III: It is suggested that if you use the same password on your Twitter account with other accounts, now would be a good time to change your password on those other accounts. Because of the scale of this hack, it can only be assumed right now that Twitter has been completely compromised.
Click to expand...

Schrade said:
That red swoop on that flag looks like a dribbling penis with a ballsack.

(I almost colored in the red/blue/green/yellow dudes but I don't want to get banned)
Click to expand...

THERE IS A GOD!
B

Iranian hackers take over a service built with RoR, a framework somewhat known for being insecure.


Congrats mr. black hats, but maybe next time you could try something a little more, I don't know... challenging?
G

Alternately you can visit www.twat.me.uk
P

This rambling broken english fails to give me any indication what their purpose is. Way to go, hackers.

This picture? uhh I can explain really!

speculawyer said:
So is this 'Iranian Cyber Army' a bunch of Iranian dissidents or Iranian government? Or neither?

I sincerely doubt that this has anything to do with the Iranian government or dissidents. This would be counter-productive for the dissidents and the government wouldn't need to do this. They can just restrict access to it.
Z

Finally, I was wondering when the Iron Fist that is USA would be lifted. I'm so glad Iranian Cyber Army is finally stepping up and telling what I can and can't see!
P

...aaaand it appears to be back up?
A

Just so you know, I have the best avatars ever.

edit: Twitter hate is weird. Did you lot get molested by a micro blogger when you were younger or something?
M

yes, let's hope it does.

The Iranian Cyber Army is following you.
O

keep it down
I

Well the good thing about this news is now the Iranian government finally has a Twitter account.
C

You have failed me Iranian Cyber Army.
I

So how long do we have until Fortress GAF falls to the might of the Iranian Cyber Army?
E

oh god no twitter's homepage was overtaken for one minute, what's going on? the world as we know it is ending
J

that freaked me out man, cant live without twitter now. I'm of Iranian descent, so I couldn't help but feel a bit of amused pride when I saw this. I mean, hacking twitter and the broken english message are pretty pathetic, but I gotta give them credit.
X

Damn, that certainly sounds like the bad (Ahmadenejad/Ayatollah/nukes) Iranians and not the good (green revolution) Iranians.
B

Yeah, just to be clear here, I don't support Ahmadinejad and all those idiots, and I'm all for the green revolution. I just found this kind of pathetic and funny. And the name is hilarious.

I wouldn't be surprised if it was just some dumb kid.
B

Hating on Twitter is the new hating Nickelback.
O

It works because they both suck.

News Hackermanz does it again. Biggest US pipeline hacked by the DarkSide.

Oct 7, 2021 started MrMephistoX
Oct 7, 2021
BadBurger
Bob Odenkirk collapses on the set and is rushed to the hospital