Ubisoft mentioned that the fact that Cybepunk 2077 isn't coming before March 2020 is good news, but still expects strong competition for Watch Dogs: Legion.

Today Ubisoft hosted its financial conference call for investors and analysts related to the first quarter of the fiscal year 2019-20, and executives from the company briefly talked about the last quarter of the year.

The executives were asked whether they feel more confident now that Cyberpunk 2077‘s release date has been announced for April 16, 2020, which places CD Projekt RED’s potential blockbuster game outside of the Q4 window, which would have put it in direct competition with Ubisoft’s big releases like Watch Dogs: Legion and Gods and Monsters.

Chief Financial Officer Frédérick Duguet admitted that it’s “good news that Cyberpunk is not in the quarter,” yet the company will remain cautious and stick to its assumption that there might be strong potential competition in Q4.
Reactions: Mista and Punished Miku

CDPR is entering into the Rockstar type territory where you don't want to release in the same week as them let alone the same month.
Reactions: TurboSpeed, darkangel-212559, TheCockatrice and 2 others

most honest thing Ubisoft has ever said
Reactions: darkangel-212559

Spring 2020 is going to be a bloodbath, all these devs trying to get games out before next gen starts are going to hurt sales all around.

I originally thought this holiday would be when we saw this final onslaught, but it seems it was delayed a few months.

Some of these games either need to move into the holiday slot, or push further into summer and try to ignore the summer gaming drought.

There’s just no way they all get by in that final spring season.
S

good news because many games in same time is not good for anyone.why they do those things at all i dont get it . just spread games to all year .

One FPP set in America, the other a TPP set in London.

I am hoping for a 3rd person PC mod in oder for me to play Cyberpunk 2077, because I love everything about the lore of Mike Pondsmiths Cyberpunk, but FPP games make me nauseous after a short while, even after messing with the fov etc.

Same as Skating games where the camera spins upside down & 360 fast, & sometimes flight/space games too

So I guess Watchdogs Legion is going to be what I buy based on the fact it’s 3rd person & as soon as the community works out a Mod for Cyberpunk I’ll buy that.

Also want the miniature figures that are being made for Cyberpunk Red Pen n Paper game, also Gonna buy the 2077 lore book from Dark Horse too.

But the more Cyberpunk we get in games the better.

Which other big games company is going to use that aesthetic next? Rockstar for GTA (already has some Cyberpunkish stuff in Online mode)

How about a Batman Beyond game tgst would be nice.

RiccochetJ said:
CDPR is entering into the Rockstar type territory where you don't want to release in the same week as them let alone the same month.
Click to expand...
Agreed, if they haven't already.
Reactions: RiccochetJ

With all the hype around it, yes, it's better to stay away from Cyberpunk 2077. 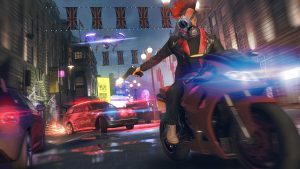