Publisher Ubisoft and The Division series developer Massive Entertainment have entered into a partnership with Lucasfilm Games to develop an open-world Star Wars game, the companies announced.

Development on the new title is still very early, and Massive Entertainment is still recruiting staff for the project. The Division 2 and The Crew director Julian Gerighty will serve as the game’s creative director, and it will use the Snowdrop Engine.

According to Sean Shopaw, senior vice president of Global Games and Interactive Experiences at Disney, “Electronic Arts has been and will continue to be a very strategic and important partner for us now and going forward. But we did feel like there’s room for others.” 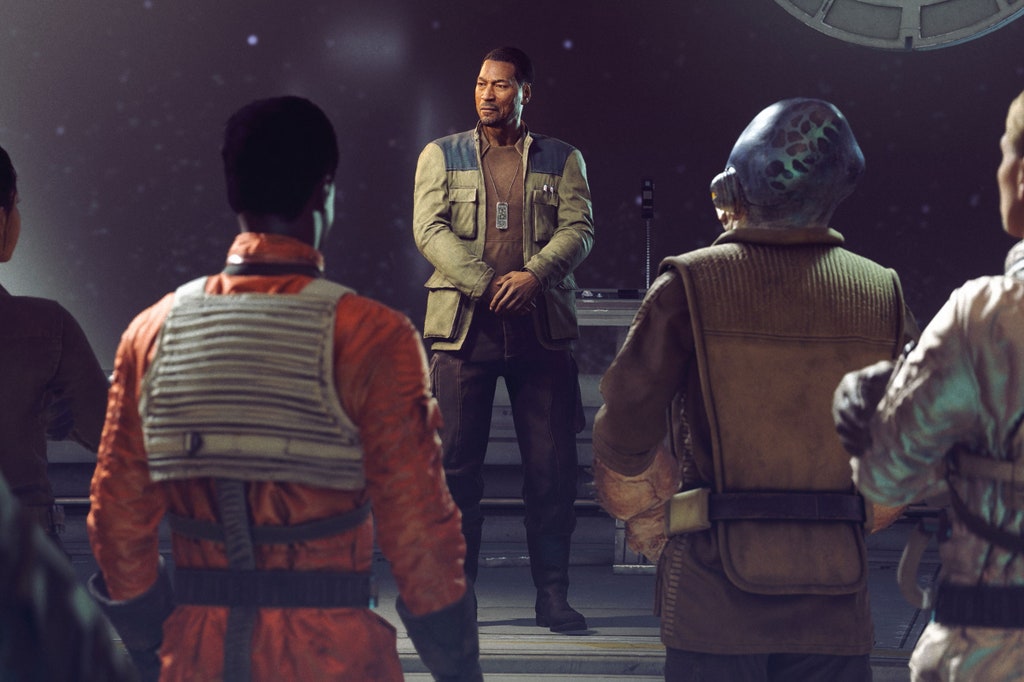 "TODAY, LUCASFILM GAMES announced that it’s entering a partnership with Ubisoft to create an open-world Star Wars game. The title will be developed by Ubisoft’s Massive Entertainment, marking the first time that a company outside of EA has produced a Star Wars game since Disney acquired Lucasfilm in 2012, ending nearly eight years of exclusivity. Also in the works is a new Indiana Jones game, to be developed by Bethesda Game Studios, a newcomer to Lucasfilm’s and Disney’s properties.

Let’s start with Star Wars. Development on this new title is still very early—Massive is still recruiting for the project even—so details are sparse. Julian Gerighty, director of The Division 2 and The Crew, will serve as the game’s creative director, and the title will use Massive’s Snowdrop engine. Beyond that, Lucasfilm Games hasn’t revealed anything about the characters or settings within the Star Wars universe that the game will feature."
Click to expand...

with the snowdrop engine, this thing is gonna look incredible. I feel Massive Entertainment is a perfect fit to make this.

Hoping it has the looting elements from the division games.
Last edited: Jan 13, 2021
Reactions: xet72, Devilich, King_Mandu and 12 others

PLEASE be a reboot of 1313, that game had soooo much potential and Massive are great at creating that kinda world, both Divisions settings were really good
Reactions: Madevil, Devilich, Hobbygaming and 2 others 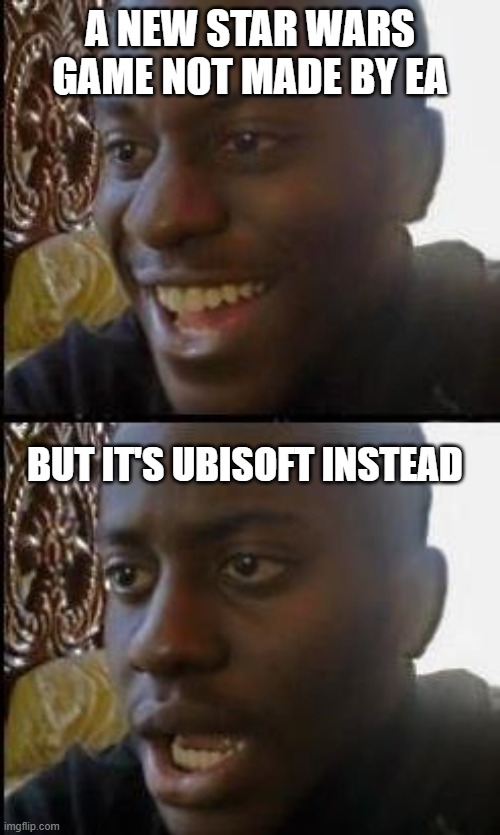 Reactions: Biff, UnNamed, Larxia and 130 others

Breath of The Force.
Reactions: Shivvy24, brian0057, King Harkinian and 3 others

PS I Love You

Oh my lawd...with all these games, this could be the best gaming generation in a while. What other games will we see?!
Last edited: Jan 13, 2021

Really surprised that neither Sony nor Microsoft have a deal with Disney for a Star Wars exclusive. Seems like EA lost the license so that should be a good opportunity for them both.
Reactions: Somnium, Hobbygaming, Romulus and 1 other person

I'm confused with all this new Lucasfilm malarkey. Does this mean EA is no longer the exclusive developer for Star Wars?
Reactions: Sub Boss and 00_Zer0

T-Cake said:
I'm confused with all this new Lucasfilm malarkey. Does this mean EA is no longer the exclusive developer for Star Wars?
Click to expand...

Pretty much
Reactions: Hobbygaming, DonF, Kuranghi and 5 others

Division 2 must be my most played game last gen, and honestly this could either turn out great or just another meh Star Wars title.

Gameplay wise Division 2 is amazingly fun, and I can see this play out more like a 1313 gameplay (more focus on gun gameplay). But right off the bat I don't think Massive can pull off lightsaber fighting on this one.
Last edited: Jan 13, 2021
Reactions: NewYork214 and mhirano

Finally. Confirmation that Disney/Lucasfilm are going outside of EA to develop Star War titles.

Not sure of Massive doing a game. Never played The Division, but these guys made Assassin's Creed Revelations which was pretty good. Hopefully they can do something fans like me will enjoy.

Wonder how much they silently paid EA to change contract
Reactions: Shivvy24

I'm very excited for the first sale after release when they have fixed all the bugs.
Reactions: ANIMAL1975

Hoping it's not another Assasins creed with star wars flavour.
Reactions: jaysius, EN250, Bo_Hazem and 1 other person

fuck yea. i really enjoyed the division games. probably one of the best ubisoft games. at least it's not the assassin's creed studio.


T-Cake said:
I'm confused with all this new Lucasfilm malarkey. Does this mean EA is no longer the exclusive developer for Star Wars?
Click to expand...

well this is ubisoft not EA so seems Disney had told EA to fuck off or that they won't get every game.
Last edited: Jan 13, 2021
Reactions: EN250 and TintoConCasera

A coop star wars game open world? yeah why the hell not.

I mean I ain't a fan of The Division games but can't really be any worse than EA's output.

Hopefully Sony get some sort of deal to make an exclusive single player game like they did with Marvel.
Reactions: EN250

I have always wanted an open-world Star Wars game so I'm very excited about this. I hope we don't have to play as a Jedi in this. Would be great if we could make our own character.
Last edited: Jan 13, 2021
Reactions: dan76 and LucidFlux

See you in 4 years when the SW hype is in the grave, I guess.
Reactions: Perrott, Shivvy24, EN250 and 2 others

Finally the SW license gets to a publisher that gets shit done and we see more Star Wars games than the occasional Bettlefront.

Trading one garbage developer for another

Very excited! Hope it's not some kind of looter "RPG" with bulletsponge enemies like The Division tho, that game wasn't for me.
Reactions: vaibhavpisal

Wonder if this is actuallly a good news or bad news

If Ubisoft turned Star Wars this into another one of their generic open world formula like AC, WD and Far Cry cant say im excited for that
Last edited: Jan 13, 2021
Reactions: Madevil
T

Reckheim said:
with the snowdrop engine, this thing is gonna look incredible. I feel Massive Entertainment is a perfect fit to make this.

Hoping it has the looting elements from the division games.
Click to expand...

I agree. Somehow Division 1 looked so much better with the snow etc.

Also please make it something like Star Wars Galaxies where I can be simply a merchant.
Reactions: Madevil, j0hnnix and Cravis

TintoConCasera said:
Very excited! Hope it's not some kind of looter "RPG" with bulletsponge enemies like The Division tho, that game wasn't for me.
Click to expand...

There are way too many pitfalls a game can fall into these days.

I will keep my hype in check.
Reactions: Madevil and TintoConCasera
R

Alright, the one-entity license era is finally over.

How does Snowdrop compare to let's say, UE5?
T

I thought EA has the exclusive rights?

Woohoo. EA no longer has the license hostage!

GreyHorace said:
Finally. Confirmation that Disney/Lucasfilm are going outside of EA to develop Star War titles.
Click to expand...

Curious how this works - didn't we get confirmation that EA holds the license till 2023? Glad to have other companies making Star Wars games, now we just need an RPG.
Reactions: Madevil and GreyHorace

Something tells me it's gonna be a GaaS, loot grind style game like The Divison.
Reactions: Bitmap Frogs

Wow. I hoped for this moment for the past 8 years, but didn't actually think it would come to this: the EA deal seems to be off prematurely. What fantastic news! Maybe, future Star Wars games will also grace Nintendo consoles now. And release more frequently.

Oh God, not Massive. And not Ubisoft either. You just know this will have some viewpoint system, lots of collectibles, janky animations and probably not a good story.
Reactions: Troozi and RyuCookingSomeRice

The possibilities now that EA isn't holding the right hostage... Platinum made jedi game when?
Reactions: EN250, HeadsUp7Up and Kokoloko85

Fuck me... From EA to Ubisoft. Why does Disney or whoever do this?
Fallen Order was good But glad the license isnt stuck with EA.

Good news. I expect it to be released in a timely fashion. Ubisoft gets a bad rap. They are capable of producing gems like Immortals, Mario + Rabbids, Rayman, etc.
Reactions: mhirano
X

LisaMariaMartin said:
Really surprised that neither Sony nor Microsoft have a deal with Disney for a Star Wars exclusive. Seems like EA lost the license so that should be a good opportunity for them both.
Click to expand...

T-Cake said:
I'm confused with all this new Lucasfilm malarkey. Does this mean EA is no longer the exclusive developer for Star Wars?
Click to expand...

Not clear what happened here. Lucasfilm not telling :

While EA had previously suggested that the company would have exclusivity on Star Wars games for 10 years, it seems like either that was misstated or the clock has run out early. (Lucasfilm would not confirm for WIRED either way.) Regardless, EA will keep making games in the future, but Lucasfilm Games is free to seek other partners.

“EA has been and will continue to be a very strategic and important partner for us now and going forward,” Sean Shoptaw, senior vice president of Global Games and Interactive Experiences at Disney, told WIRED. “But we did feel like there's room for others.” [Wired]
Click to expand...

As someone who really enjoys the Division 2, this makes me happy...with caution. This very well could be a game as a service title/division 2/destiny kind of game.

Or something different. Who knows except the people making it for now?

Do something different... let us play Empire, its like people ignore the huge faction imbalance of the Old Republic MMO, everyone wants to be empire, it also means that's taking the morally grey or "evil" choice feels natural while the "paladin of virtue" good guy route is made more interesting by the fact your supposed to be evil... but arnt.

Hell Han Solo was in the Empire for years apparently, sure he hated it but he was there, and that was the most interesting part of that movie.

What a boring choice.
Reactions: jaysius, EN250, phaedrus and 1 other person

Excellent news, and I think it's a win-win for gamers.

Yes, we may get some bad games, but because of the sheer number of games, we might also get some pretty good Star Wars games.

My question is that isn't Massive also working on an Avatar game? Or is this another team?
Reactions: Bolivar687

Literally no better studio around who could've done this project. Massive are an amazing studio & The Division 1 & 2 were incredible. Fucking HYPED!

Ubisoft is the worrying aspect here
Reactions: jaysius, poodaddy, EN250 and 3 others
You must log in or register to reply here.