And if youre dying to get your own hands on it, dont worry, were having a multiplayer beta! It starts on June 3rd and you can get access to it through vouchers in inFamous, which goes on sale May 26th.
Click to expand...

OHHHH YEAH
Just want to ask ND for one favor..PARTY SYSTEM.
Thanks you
SPARDA 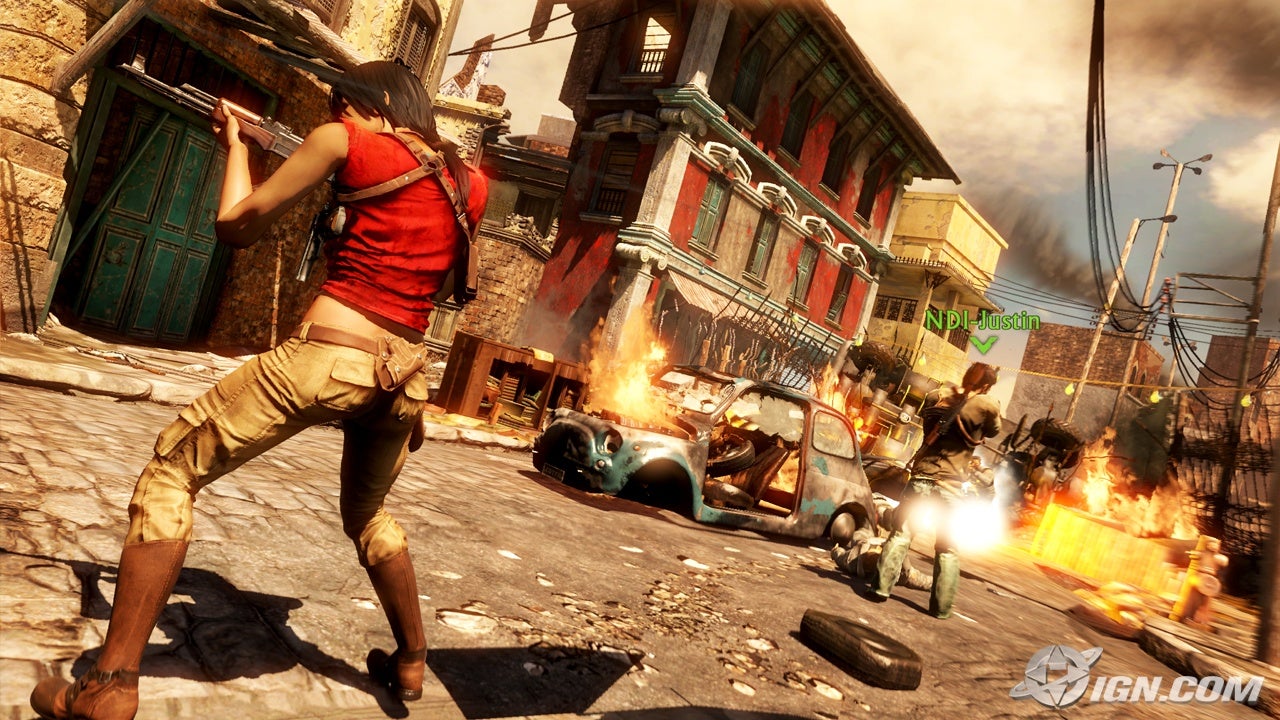 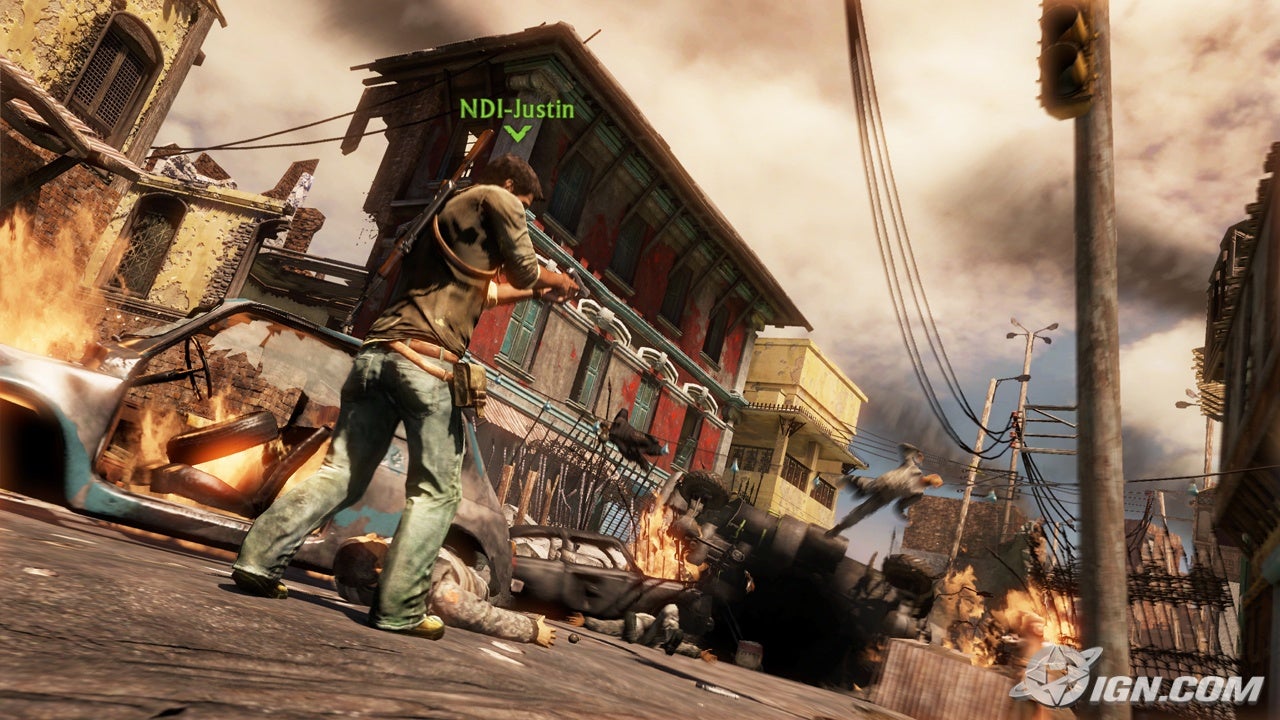 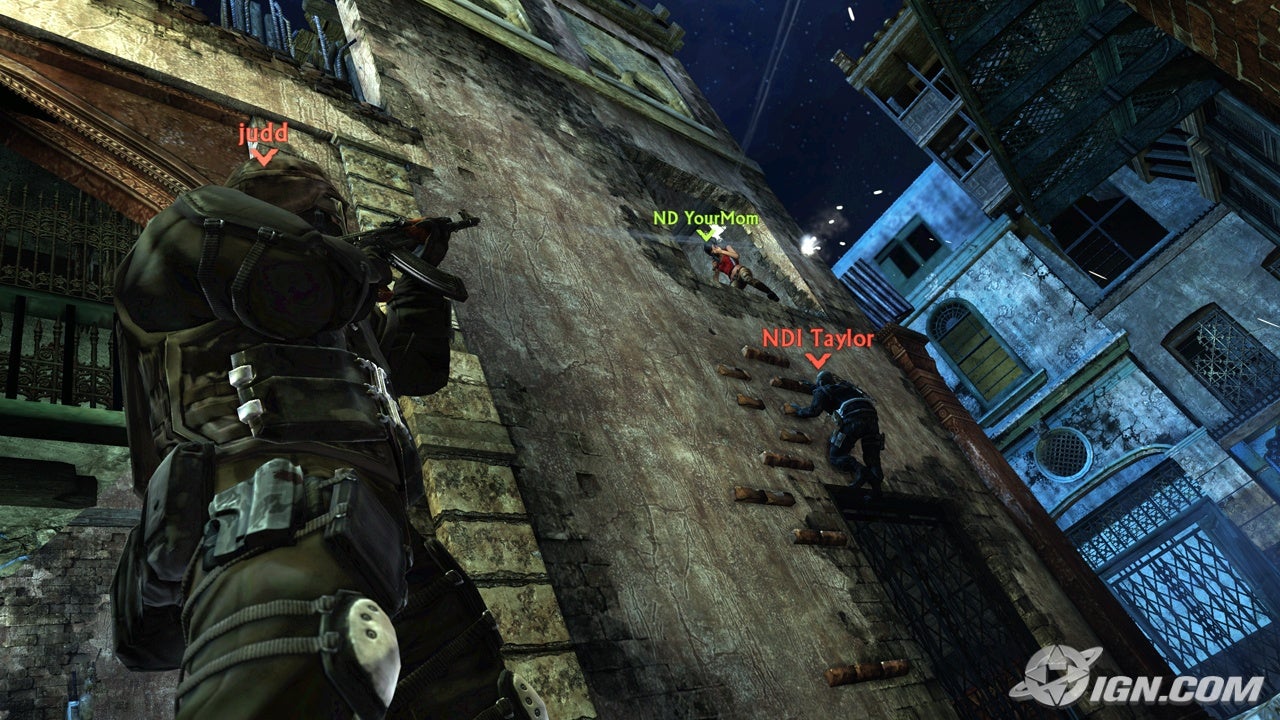 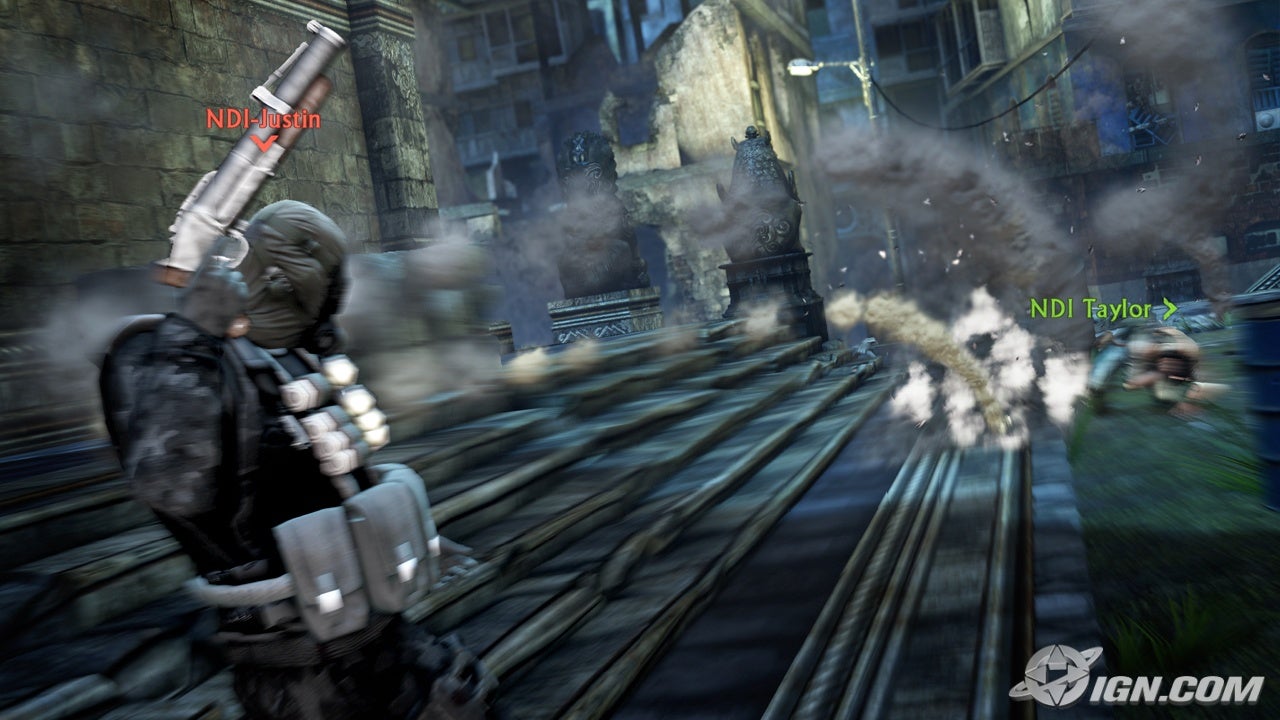 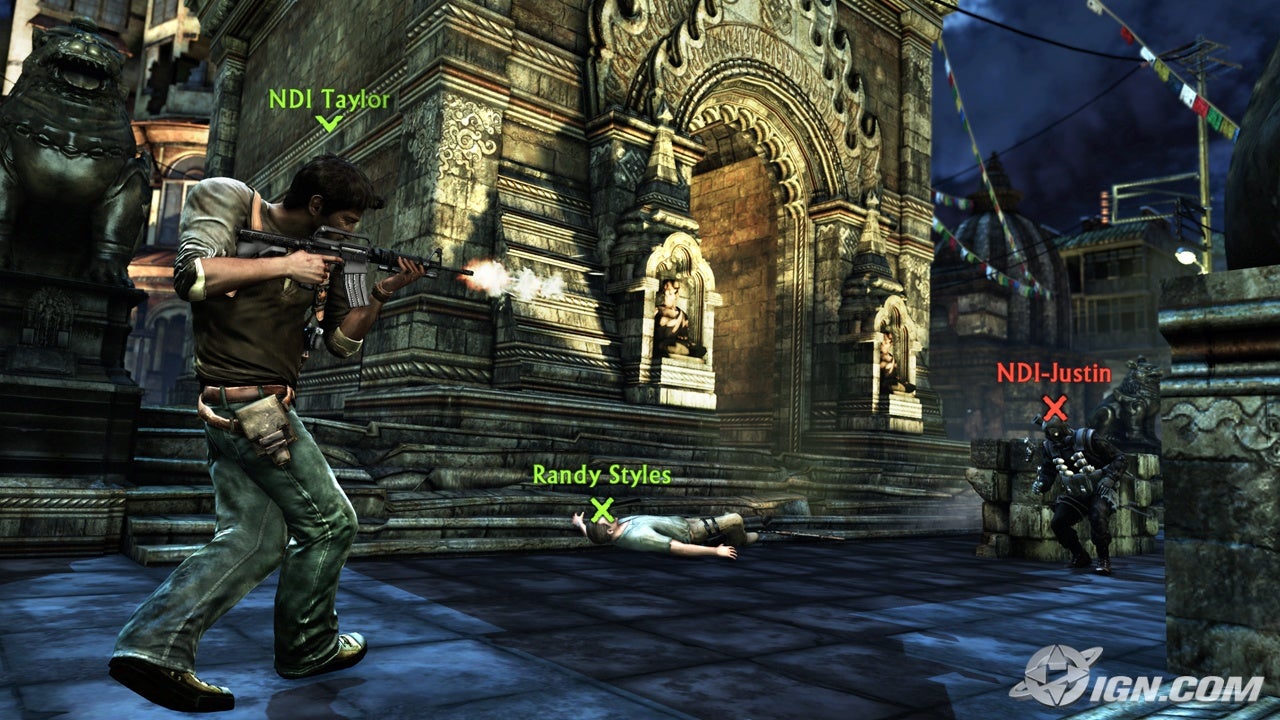 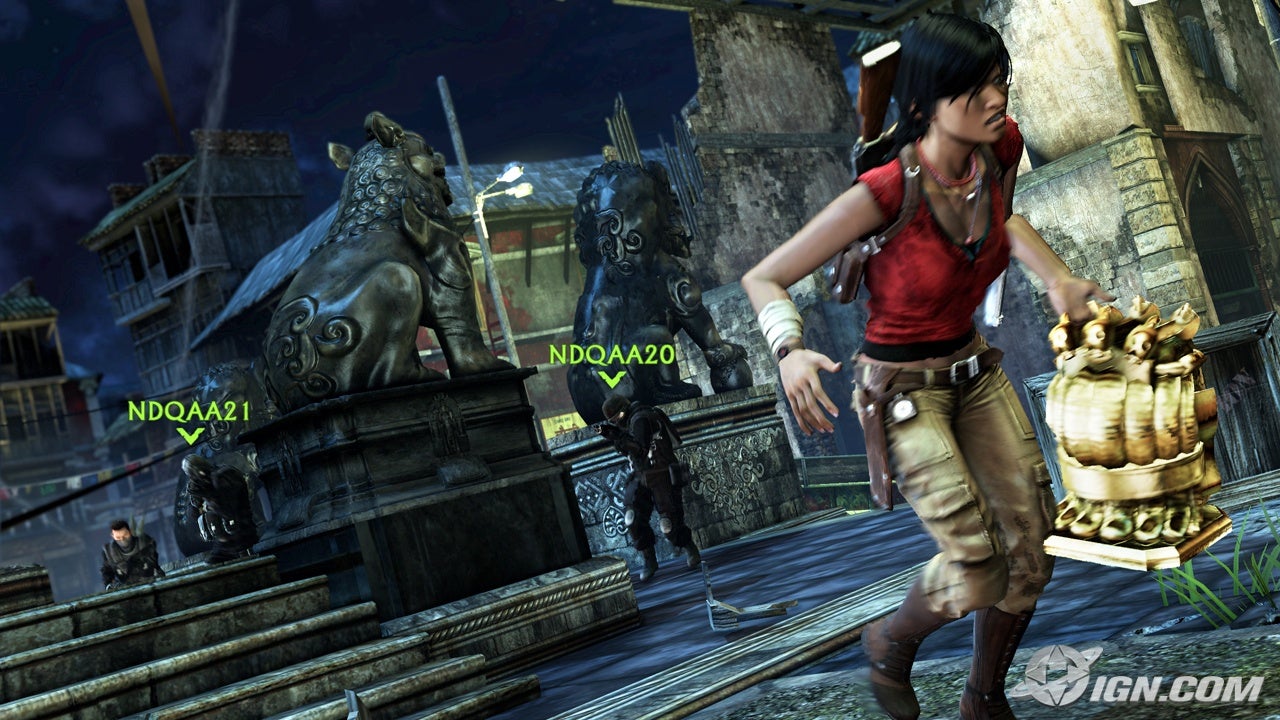 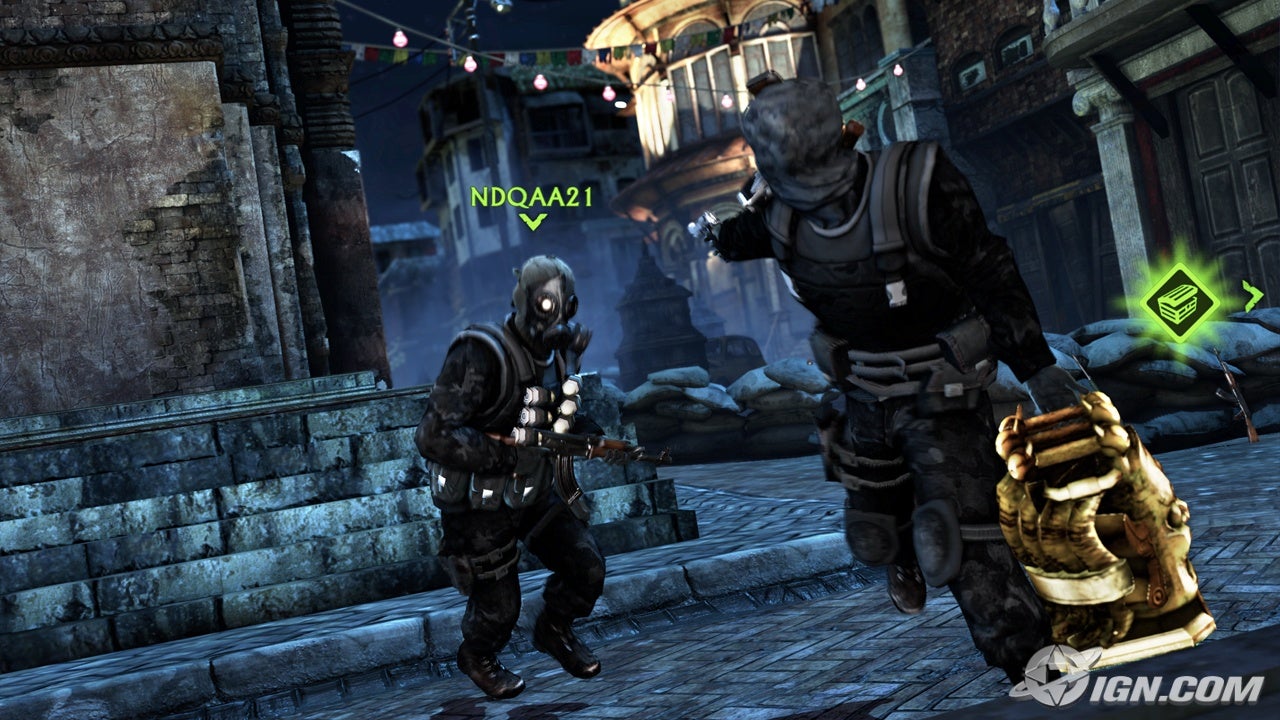 
N30RYU said:
-Multiplayer co-op for 3 players. Different story than single player. Zones/actions in the map requiered for 2/3 players. Mini bosses in each section. Players will revive after a few seconds (lees if the other players helkp to revive)

-Deathmatch. 4vs4 you can choose two skills. And you need to explore like in Uncharted 1 to find the strongest weapons.

-Capture the treasure, is like CTF. 4vs4 trying to steal treasures from the enemy base.
Click to expand...

After Naughty Dog made its announcement in the form of a video trailer, it immediately set the press loose onto a bevy of demo stations to get hands-on time with the game. We started by jumping onto one of the stations with co-op mode on it. In a nutshell, Uncharted 2 co-op is designed for two to three players to take part in a number of environments from the game's single-player campaign. You won't be able to play the entirety of the game's single-player portion, but rather a select number of levels that Naughty Dog co-president Evan Wells says work best with the increased number of players. Basically, the levels are handpicked and slightly reworked to provide a good balance between the cover-based gun combat and slick platforming that make up the yin and yang of Uncharted 2's gameplay.

But that's over the duration of all the co-op levels, because the one we had the chance to try focused very much on combat. It was set in the same Nepalese warzone Naughty Dog previously showed off in our last look at the game, but this time Drake was joined by his old pal Sully and the new female protagonist, Chloe Frazier (we played as Drake, while our co-op partners played as the other two). The action plays very much like Uncharted: you take cover, pop up to shoot your enemies, and proceed forward until a new swarm of bad guys comes your way. What differs, though, are your ability to revive fallen teammates and the new co-op goals that require the full group to convene at a single point to, say, lift a heavy bookshelf blocking the path or give one another boosts to get to a higher location.
Click to expand...

Multiplayer is quite a bit more straightforward than co-op. The stations running at the event alternated between cut-and-dried deathmatch games and another mode called Plunder, which is a variation on capture the flag. Multiplayer maps are inspired by locales from the single-player game, though they've been significantly reworked to account for balance between competing sides. They're arranged in such a way that climbing around plays to your advantage just as much as hiding behind cover. With a bit of leaping and shimmying, you can make it up to a rooftop perch to pick off enemies from afar, or just leap from building to building to avoid the deadly foot traffic down below.
Click to expand...

Now, the Dogs said that there are going to be a bunch of different game types and options for you to check out, but for my hands-on time, they kept it limited to co-op, team deathmatch, and a few rounds of Plunder (capture the flag in the Uncharted universe). Cooperative matches were for three people at a time (folks played as Nate, Chloe, and Sully) while the competitive matches were for teams of five -- a villain team of SWAT-looking guys and a hero team featuring Nathan, Chloe, Sullivan, some dude in a hat, and Elena. Don't freak out fans; Naughty Dog said that the inclusion of Elena and Sullivan in multiplayer didn't technically confirm them for the single-player campaign because the two characters were using their skins from the original Uncharted (there'll be a few options like this), but it's close enough for me.
Click to expand...

Of course, when someone on my team got cocky, he or she would get dropped. Like most co-op titles these days, you have the chance to revive fallen teammates. When hurt, the player will drop to one knee and clutch the ground while an icon mimicking the position pops up above the hurtin' hero. Around the icon is a red meter that's slowly bleeding out. The team has that long to get over to the downed comrade and hold Triangle to refill the meter and get the soldier back on his or her feet. If no one comes to the player's aid, they wait 20 seconds, restart at the last checkpoint, and run back to the battleground. If everyone dies, the mission restarts from the last checkpoint.

Sticking together is going to be key to besting the challenges in co-op Uncharted (duh), even though you will be competing to see who got the most points in a round -- something made more interesting by the point multiplier that's building in the upper right corner of the screen while you're shooting and brawling. Although most PlayStation 3 owners feel right at home when they're hiding behind cover and watching dozens of enemies setup camp in front, Naughty Dog has dropped a number of mission points and enemies that you just can't get past by yourself.
Click to expand...

What's crazy cool on top of all that competitive goodness -- well, besides the slew of weapons from the game such as sniper rifles, the Desert-5, the SAS-12 shotgun, and the Colt Defender? You're going to be able to save entire multiplayer matches to your hard drive and then edit them and view them in Cinema Mode. Rotating the camera at will and zooming in on specific fights will be just some of the commands you have for the ten cinema save slots at your fingertips. Naughty Dog didn't show the mode, but it definitely sounds interesting.

Believe it or not, that's just the tip of the Uncharted 2: Among Thieves multiplayer madness. Naughty Dog was sure to stress that there are going to be other modes and a number of co-op missions, but the examples you just read about were all the team was prepared to show. Honestly, I had always been a bit mixed on the idea of multiplayer in Uncharted; I liked the idea of the franchise being a solid single-player experience and nothing else. Still, co-op is a blast and I'm thankful it is its own entity so that the single-player portion can thrive and not be tied to having to have a friend playing to get the full story. Meanwhile, competitive multiplayer is fun, too, but I'm going to need to play more before I get crazy excited about it. Everything looked great visually, but the mode never really had the Uncharted feel to it for me.
Click to expand...

i'm expecting even more disappointment from the SP-only fans.
S

these don't look doctored at all
B

Name me one reason I would want to play this instead of COD4 or Killzone 2.
T

Verticality = win
I think the MP will be like the original Splintercell MP.
R

Like I said in the other thread, it looks reminiscent of Spies vs. Mercs from Splinter Cell, with one team having to climb and capture treasures. Could be cool if that's the case.
L

The follow up to my 2007 GOTY just got even more awesomer, but can it take the crowd away from my current front runner RGG3 for 2009 GOTY???

Who knows, but I'll have a lot of fun when it comes out. =D
T

Love the motion blur they've added to the game.

yeah the vertical climbing shit could be cool.
H

Looks like single player screens to me with the tags put on after, or is it just me?
O

I just hope there's compelling Co-op in this game. Is there a shooter with multiplayer mode out there that doesn't have deathmatch?
S

I'm hoping for good things, although kind of wish the attention spent here was put towards an even more awesome SP experience.
S

Looking at these pics seem to suggest Naughty Dog has implemented per object based motion blur somewhat akin to Killzone 2 with how the characters look relative to the background.

Naughty Dog is a beast!
G

I hope this doesn't mean that the singleplayer is under 8 hours again.
K

Looking good. Not sure why people are even suggesting that "graphics took a hit" when it didn't, MP looks better than SP of most of the top games.

Stryder said:
I'm hoping for good things, although kind of wish the attention spent here was put towards an even more awesome SP experience.
Click to expand...

Gully State said:
I hope this doesn't mean that the singleplayer is under 8 hours again.
Click to expand...

Enough with this bullshit, SP will be great, but now we're getting a Co op experience AND competitive MP. I hope there's offline co op and mp too. Day 1 for me.
K

Holy crap, they actually read my post in the Uncharted thread.

Thanks guys! I feel obliged to buy the sequel now!
G

one screen has a treasure chest on the hud
W

Edited the OP since that site lists which screens are co-op and which are from the multiplayer mode.
1

_dementia said:
these don't look doctored at all
Click to expand...

Hello oblivious people who are letting themselves be so easily fooled^^^

Looking good, I'll definitively give it a try.
X

The last pic has Sully in it

I really don't like the look of Chloe, but that may be because I've been playing RE5 a lot as of late.
F

wow you could really stand to lose some weight man. btw why did you post a pic of yourself in this thread anyway?
J

Can someone translate the article and tell me what they say about multiplayer/co-op?
J

Coop should be interesting, but meh at DM.
U

WOW
Looks as good as SP!

I can't be the only one who thinks that buddy Nathan looks goofy as hell in this shot? So the effect that Evan Wells mentioned Insomniac and Guerilla having helped them on seems to be per-pixel motion blur. Which is fucking awesome because it improves the look of any game alot as far as I'm concerned.

Now can we extrapolate that the new Ratchet game might be using it aswell? Would be mighty impressive if they can pull it off! My mom got to play this before me?! What the hell!
M

HOW THE HELL CAN ANYBODY HATE ON THIS!?!?!

They added motion blur too D:
They probably got the motion blur from Guerilla Games.
This looks AWESOME
H

JoeFenix said:
So the effect that Evan Wells mentioned Insomniac and Guerilla having helped them on seems to be per-pixel motion blur. Which is fucking awesome because it improves the look of any game alot as far as I'm concerned.

Now can we extrapolate that the new Ratchet game might be using it aswell? Would be mighty impressive if they can pull it off!
Click to expand...

Yeah. The initial teaser/trailers and gameplay videos didn't seem to show off that kind of motion blur effect, it looked along the lines of the original in regards to motion.

Damn, I can't wait to see what the complete package all looks in motion.
O

Vertical traversal looks to be an important part of this game. I remember Wollan's post
You must log in or register to reply here.