The PlayStation 4 demo for Valkyria Chronicles 4 is now available via the Japanese PlayStation Store. It weighs in at 5.3 gigabytes.
The demo will let you play from the beginning of the game up until the second chapter of the main scenario, and its save data can be imported into the full release when it launches. If play the demo until the end, you will be able to take on an extra mission based around the new “Grenadier” class.

As much as I'm crazy excited for this game, I wont be downloading the demo because I want go in to the game completely blind but I would still love to hear some impression.
P

It's the first 2 chapters of the game as a demo and the save data carries over to the retail version. But if you're not buying the JP version then stay away from this.

I'm not sure if I should be linking to this but since it seems that my posts are being vetted by moderators before they're published anyway: My play report of the demo is up on Frontline Gaming Japan.

I'm fluent in Japanese and did clear 2. I got halfway through and quit 3 several times as it didn't really click with me gameplay-wise (I did find it to be better than 2 though), and cleared Azure Revolution.

4 is nothing like them. Like I wrote in that article: From what's in the demo, it feels like this is a straight up extension of 1's gameplay. There's a bunch of balance changes that make it so that the old scout tactics don't work as well too (not that they don't work at all, just not as well). The new grenadier class is great fun too.
Last edited: Mar 14, 2018

I can't wait for this game, I'm a huge fan of the series and personally find this to be the "go too" series for Sega even though it hasn't been handled the way it should be. Still hoping for a VC3 remaster/ localization one day although I know it can be done on the PSP through a fan localization but heres to hoping for a North American release date soon for VC4. 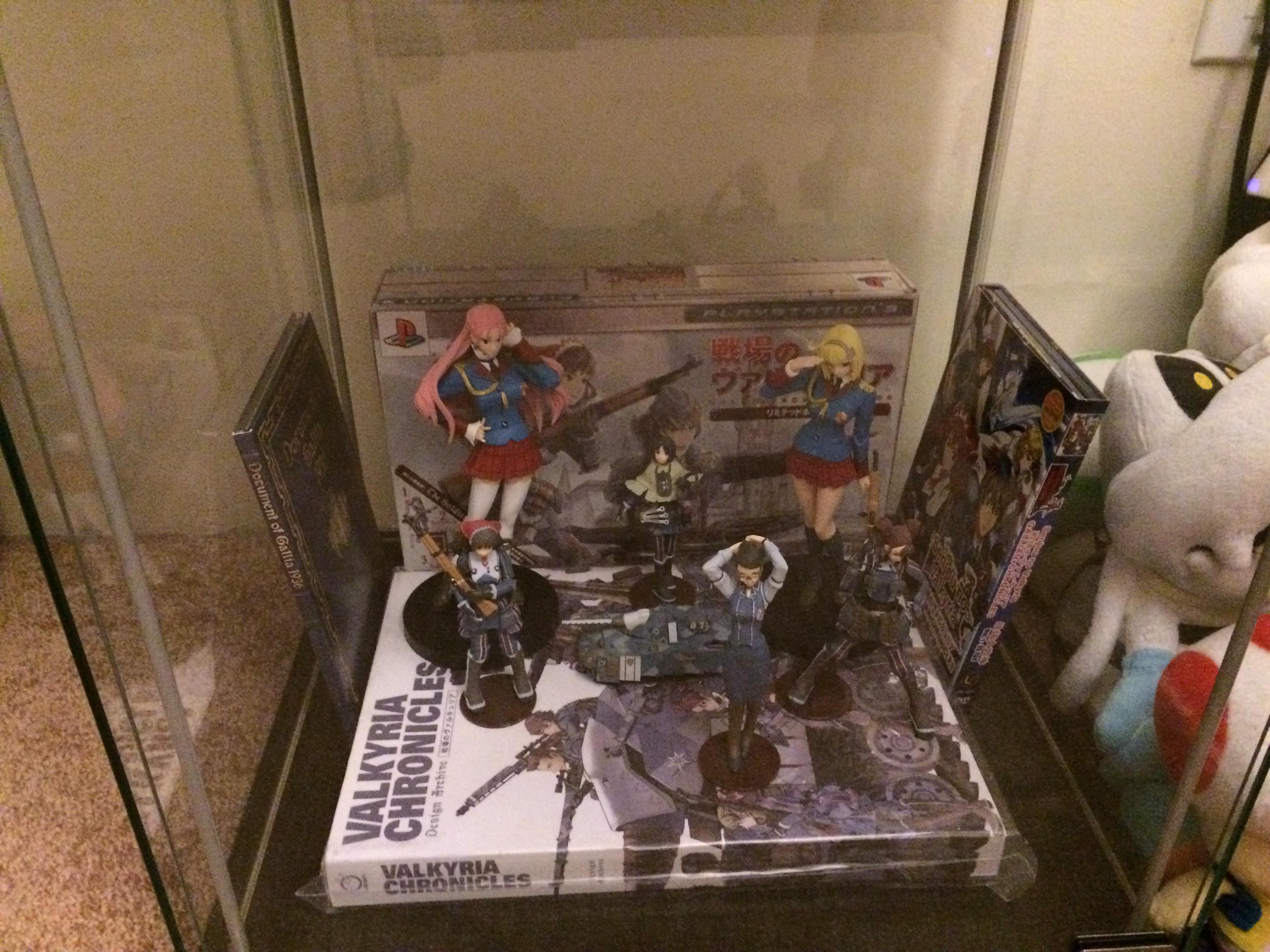 Is there an OT yet? I'll post impressions there if we have one.

Is there an OT yet? I'll post impressions there if we have one.
Click to expand...
I dont think theres an import ot yet - please make one though - id love to read your detailed impressions and see screenshots if possible

Is there an OT yet? I'll post impressions there if we have one.
Click to expand...
I'm soooooo jealous, I want to undrestan story when I'm playing the game so I have to wait Untill gets released here.
D

If no one has dibs on the OT, I will make one tomorrow. No guarantees that it will be up to the standard of previous NeoGAF OT extravaganzas, but I'll give it a try!
V

I pre-ordered ages ago but Amazon isn't even shipping my copy till later today. Typical.
D

Started constructing an OT; should have it ready over the weekend!

(What degree of spoilers is acceptable in an OT? Anything seen in trailers? Up to what is seen in a demo?)

Gameplay so far has brought the VC1 vibes right back in almost every way -- the art; the UI, the soldiers's personalities. There's a lot of anime cliche-ness (the "friends from early childhood" trope has already reared its head) but somehow it's not annoying, and

And the Empire doesn't fool around in the battles! I don't remember them being this vicious in VC1, but this time, I had a soldier injured on the battlefield and calling for help, and the enemy's turn came up. One of their scouts came from off the visible area of the map, ran all the way to where that soldier was, and "touched" her, (by which the game, without showing it, implies: bayoneted her and killed her) despite having no action to take, and then jogged back a few meters. Stone cold vicious. (I wish there were a way to walk near downed enemies and not do this. I used to intentionally avoig getting close to them for this reason.)

This death was the result of me misunderstanding the "rules" this time around: in VC1, tanks could knock down small barricades to open a path for foot soldiers, so in an area guarded by turrets, I was planning to have the tank come in and block the turrets while my soldiers ran alongside. But a tiny, knee-high fence blocked my tank's movement. There was no "No Tank" icon like there usually is, so I feel cheated a bit.
Last edited: Mar 23, 2018

Dunan how are the maps when compared to the first game? Are they about the same size? Any key differences in the way you use them to your advantage? Can you enter buildings this time (besides going up at the rooftops)? Are there weather variations that affect combat?

Can't believe I'm hearing it's really a return to VC1. I gave up hope of that years ago. Thanks so much for the impressions, looking forward to the import OT.

Dunan said:
And the Empire doesn't fool around in the battles! I don't remember them being this vicious in VC1,
Click to expand...
Playing on normal. I've had enemy assaults run up and shoot at my people point blank a few times, but otherwise the AI seems like it actually be dumber than usual; On one stage I threw a single character into the APC and drove him to the mission objective but missed being able to capture it by a tiny bit and was so left with one APC and one guy deep into enemy territory, and for some reason the enemy spent its entire turn moving tanks around trying to shoot at the guy from miles away and missing even though he was literally standing right next to a bunch of troops.

Bolivar687 said:
Can't believe I'm hearing it's really a return to VC1. I gave up hope of that years ago. Thanks so much for the impressions, looking forward to the import OT.
Click to expand...
Might be a bit TOO similar to 1. Siegwall is a battle they hype up super hard- The empire is gathering all of its forces there, there are pillboxes all over, there are new mechanics intended to make the game harder, the map is gigantic and filled with enemies- and I cleared Siegwall 1 in one turn with the usual APC shenanigans.
Last edited: Mar 24, 2018

My Valkyria 4 review is up on Frontline Gaming Japan, FYI.

The time limit to edit my post expired so...

JohannCK said:
and I cleared Siegwall 1 in one turn with the usual APC shenanigans.
Click to expand...
I'm 12 hours in and it turns out that EVERY skirmish battle so far can be cleared in one turn with scouts and the APC, and a lot of story missions are trivialised too (I've gotten stages where the story goes "oh no the enemy has this new scary weapon" which had me just run past and clear the stage with no problem twice at this point).

I think some people might be dissatisfied with how this isn't "fixed" but I personally feel that silly APC/scout shenanigans are part of the series' identity by this point.

JohannCK said:
My Valkyria 4 review is up on Frontline Gaming Japan, FYI.
Click to expand...
Thanks for posting a link to your review; it sounds fantastic. I can't wait to pick this one up .
Last edited: Mar 26, 2018
D

OT Progress: I've got a big logo for the game, and about six or eight screenshots (no scans; are scans still banned?) of gameplay in the first two or three chapters. Is this enough these days? I know that in the past people went wildly overboard with OTs and were told to scale back. Mine will be pretty pedestrian by those standards.

JohannCK said:
I'm 12 hours in and it turns out that EVERY skirmish battle so far can be cleared in one turn with scouts and the APC
Click to expand...
I just did my first skirmish and that's basically how it was; I was surprised at how easy it was. The first turn of the first mission of the game, in which you sneak up on an enemy soldier from behind and shoot him, is also a little too easy; maybe people playing the first game were turned off by having bullets fly at them from the very start in VC1's intro mission?

But I'm loving everything else about the game -- they even got to finally use a tower with signal numbers, developed a decade ago for the first game; it appears in a mission and the mission works pretty well. I'm enjoying the weather effects like mist and day/night differences. Looking forward to the snow! Sublimit, the maps are big to begin with and eventually get huge: remember how the maps are divided with vertical and horizontal lines, with the points labeled 11, 12, 13..., 21, 22, 23... as you go to the right and downward? Now, we get more than ten gridlines in both directions, and we have map points labelled 910 and 108 and even 1211. (The grid lines bisect the numbers, so they aren't confusing on the actual maps.) I actually watched the trailer loop twice when picking the game up at Yodobashi Camera to confirm this. Huge.

Also, Johann, very minor nitpick in your excellent review: "Edinburgh" is not England; it is the United Kingdom. "Dokkum" appears to be England/Scotland/Wales and "Delfzijl" is Ireland, and Delfzijn seems not to have gained independence as it has for us. VC1's map of Europa never gave us a name for this "United Kingdom".

I'm really digging the updated map: we finally get to see the equivalent of Scandinavia, and there are two other small countries in a position similar to Gallia (Nemur and Emmen) which I hope we get to interact with.
Last edited: Mar 27, 2018

Dunan said:
Also, Johann, very minor nitpick in your excellent review: "Edinburgh" is not England; it is the United Kingdom. "Dokkum" appears to be England/Scotland/Wales and "Delfzijl" is Ireland, and Delfzijn seems not to have gained independence as it has for us. VC1's map of Europa never gave us a name for this "United Kingdom".
Click to expand...
Whoops, thanks for pointing that out, fixed it.

JohannCK said:
My Valkyria 4 review is up on Frontline Gaming Japan, FYI.
Click to expand...
I've cleared the game and updated that review accordingly.

I'm of the opinion that this is straight up the best game in the series.

Some of the later stages (and one midway through) do have some bullshit that feels straight up unfair, but aside from that one midway one (defending the ship from bombs) none of them are actually all that bad once you figure out the gimmick.