The first release of the specification, DisplayHDR version 1.0, establishes three distinct levels of HDR system performance to facilitate adoption of HDR throughout the PC market. HDR provides better contrast and color accuracy as well as more vibrant colors compared to Standard Dynamic Range (SDR) displays, and is gaining interest for a wide range of applications, including movie viewing, gaming, and creation of photo and video content.

VESA developed the DisplayHDR specification with the input of more than two dozen active member companies. These members include major OEMs that make displays, graphic cards, CPUs, panels, display drivers and other components, as well as color calibration providers. A list of participating companies is available here.

Brand Confusion Necessitates Clearly Defined HDR Standard
HDR logos and brands abound, but until now, there has been no open standard with a fully transparent testing methodology. Since HDR performance details are typically not provided, consumers are unable to obtain meaningful performance information. With DisplayHDR, VESA aims to alleviate this problem by:


"We selected 400 nits as the DisplayHDR specification's entry point for three key reasons," said Roland Wooster, chairman of the VESA task group responsible for DisplayHDR, and the association's representative from Intel Corp. for HDR display technology. "First, 400 nits is 50 percent brighter than typical SDR laptop displays. Second, the bit depth requirement is true 8-bit, whereas the vast majority of SDR panels are only 6-bit with dithering to simulate 8-bit video. Finally, the DisplayHDR 400 spec requires HDR-10 support and global dimming at a minimum. With this tiered specification, ranging from baseline to high-end HDR performance levels, PC makers will finally have consistent, measurable HDR performance parameters. Also, when buying a new PC, consumers will be able to view an HDR rating number that is meaningful and will reflect actual performance."

"Developing this specification is a natural expansion of our range of video standards," said Bill Lempesis, VESA executive director. "Moreover, we are the first standards body to develop a publicly available test tool for HDR qualification, utilizing a methodology for the above-mentioned tests that end users can apply without having to invest in costly lab hardware. Most of the tests require only a colorimeter, which many users already own. Ease of testing was a must-have requirement in order to make DisplayHDR a truly viable, consumer-friendly spec." 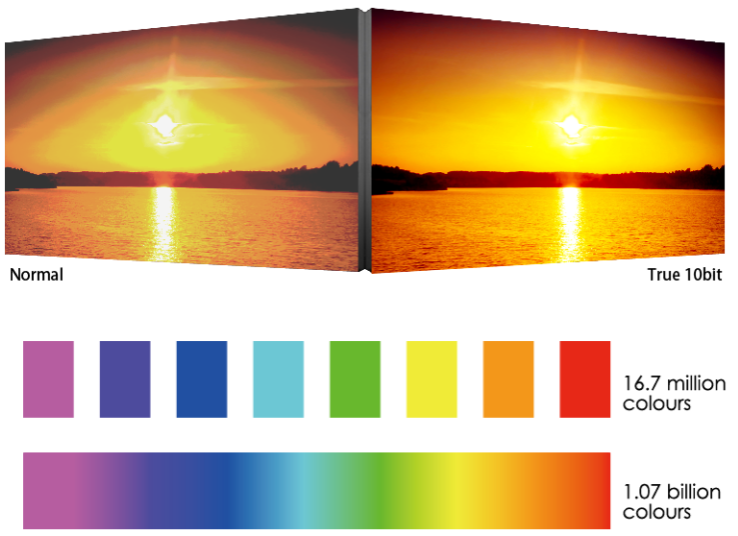 I don't know why they even bothered with the tiers. Will HDR at such low max brightness work even decently? Will the much shorter viewing distance allow that as you typically watch a TV from much further away? So it's not like a bright screen is blasting into your eyes from close up.

Not requiring 10-bit display is also a bummer, would have helped push 10-bit forward.

If getting an HDR screen wasnt fucking confusing enough allready.

TVs have problem of having only single "premium" level, and there is nothing to differentiate below that.

Where as at the moment "HDR" on a monitor tells you next to nothing about its capabilities.

Its good to see this finally happening, it's something that has really been needed. I just hope they've made the right choices here.

Thanks &#65533;&#65533;
Click to expand...
How could this possibly make it more confusing? We've gone from every single HDR panel being sold with a HDR badge, which meant very little, to them all now fitting into one of three clearly defined quantitate groups?

HDR is only a standard in the absolute vaguest of terms which means that if you buy two panels which have been labelled as HDR, it really tells you nothing about those panels.

UHD Premium is already a thing but it's something that only really illustrates that you're buying a panel which is pretty good "at the moment". A current UHD Premium panel in five years will anything but premium as there are technologies which will be common then which aren't even available now.

Due to this having three benchmarks that are quantifiable simplifies matters greatly. Maybe five years down the line they'll add a 2000 category but doing that doesn't change the quality of previously rated panels as this based on specific requirements rather than a vague concept such as UHD Premium or an ever vaguer concept such as "HDR".
C

Hopefully this means they can start rolling out g-sync HDR monitors.
T

I would have preferred if they made 10-bit and DCI-P3 as minspec but otherwise this is a step in the right direction IMO. Looking forward to the new monitor announcements at E3 2018.

I can't believe something like this isn't standard in PC monitors yet.

Since 8 bit is mandated, does that just mean it's the minimum? And that 10 bit would be available too?

Lol wow. 1000nits 12-24" from your face. No thanks. HDR400 rating is more suitable. When calibrated, target is way lower usually, so youll just get peaks.

But at least we're getting somewhere.

I just recently got a Samsung 27" QLED 144hz QHD monitor, and its VA. And its really good compared to most monitors. But they still need to improve these further, and at reasonable prices. Still waiting for a $1000 OLED monitor from LG. 27-32"pls.

drotahorror said:
I'm eagerly awaiting 1440p, 144hz, 10bit, 1000nit, HDR.
Click to expand...
1000nit is more than most people think it is, even watching my TV from 5 meters I feel uncomfortable, sitting next to it can be outright painful experience.

HDR400 is disappointing since it's essentially legalizes the "not-really-HDR" displays as HDR. 600 and 1000 are fine although I would probably prefer to have a requirement of supporting 12 bits for the highest tier.

Is there any monitor on the market at the moment, that can hit even 400 nits?

I might be unlucky at clicking on the right one:
http://www.tftcentral.co.uk/reviews.htm

I need a new monitor.
F

dr_rus said:
HDR400 is disappointing since it's essentially legalizes the "not-really-HDR" displays as HDR. 600 and 1000 are fine although I would probably prefer to have a requirement of supporting 12 bits for the highest tier.
Click to expand...
I disagree.

There is more than just the brightness that will keep displays from becoming something they are not overnight. The VESA chairman, Roland Wooster, addresses this directly. On the topic of brightness, I think viewing distance has to be taken into account. At about 4 ft my Samsung KS8000 gets bright enough to bother my eyes. (It's also a common complaint from my roommates and boyfriend.) There is no way I could use KS8000 at any close distance regularly compared to a tablet, or a computer monitor. I could see the need for the HDR 600 and HDR 400 specs for a range of devices based on the amount of time the screen will be turned on and viewed by the user and distance from the user.

I am disappointed on the bit specification though. I would have wanted 8 + 2FRC as the minimum entry level spec.
J

llien said:
Is there any monitor on the market at the moment, that can hit even 400 nits?

I might be unlucky at clicking on the right one:
http://www.tftcentral.co.uk/reviews.htm

http://www.tftcentral.co.uk/reviews/dell_up2718q.htm
Click to expand...
This is what I just got.
https://www.rtings.com/monitor/reviews/samsung/chg70-curved-gaming-monitor

Is it OLED or Z9D level of HDR? No. But it's surprisingly good, at a really fair price. Will hold me over until OLED monitors hopefully.