Warhammer 40,000 |OT| In the Grim Darkness of the Community Forum There Is Only War

luffie said:
Sorry if this is the wrong place, but as a rememberancer I would like to show you some glorious images of the Wolf King that I've made. manfestival said:
can anyone get me up to speed on the lore? I kinda disappeared about 7 months ago into another continent and didnt keep up with the lore. The last thing I was seeing was the return of guilliman. Even have the book which i stopped half way through. I need a recap on events since then!
Click to expand...

Well, a lot of things happened... Guilliman ordered Cawl, the Mars Archimagos, to make operative an ancient project, prepared 10k years before... The Primaris Marine! A new kind of Space Marine, enginered to perfection in every aspect: more strenght, more speed, less corrupution ratio than old marines.
The Primaris were quickly actived, literally a legion of new soldiers, and they formed the Unnumbered Sons, countless armies used from Guilliman to reclaim all the worlds devasted from the Chaos armies after the 13th Black Crusade: the beginning of the Indomitus Crusade, with the final objective of reaching Terra.
Lots happened after this, first the battle for Ultramar worlds, then the rescue of Baal (literally devasted from both Chaos and Tyranids, poor Dante) and then the discovery of a "passage" inside the Great Rift (formed after the fall of Cadia), used to reach Terra and send reinforcements.

The Indomitus Crusade ended with lots of worlds reclaimed for the Imperium and the remained Primaries armies were redistribuited into a lot of new Chapters or they were distribuited to old Chapters that suffered from great losses in the war. While Guilliman was restoring Terra, reducing the power of High Lords (finally) and rewriting the Codex, Mortation decided to attack Ultramar and the Primarch was forced to return to his realm to fight again...

Haven't played wh40k in years - is there any explanation why they use all those stupid new names for armies instead of good old Eldar, Space Marines etc ?

Uh? Do you mean "Primaris"? I wrote the reason above in the previous post
Or do you mean some different things?
As far as I know, Space Marines are still Space Marines, despite their different genetic creation method.

In fact, I belive they changed the name for the different units.. But only for Primaris, yeah.

But I'm more a fan of the lore (books, games, etc), not the board game so I can't really help you in this one, sorry :/

Is there any Novel that describes Guilliman´s resurrection?
Or at least the Events shortly after ?
M 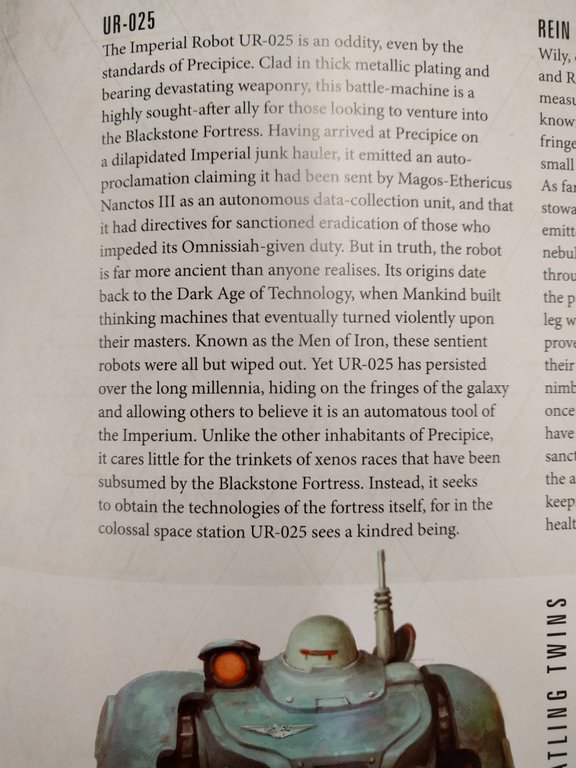 Ixiah said:
Is there any Novel that describes Guilliman´s resurrection?
Or at least the Events shortly after ?
Click to expand...

Sure! Dark Imperium, Plague Wars and the duology "Dante/Devastation of Baal" is all about Guilliman's return and drop Primaris in every direction

If you want to read specifically about his resurrection, I belive the story is written in "Gathering Storm" but it was a book made for the latest Codex (maybe?) so it needs a proper book. It was a limited edition for few people.

WOAH, THE MEN OF IRON!

If you are referring to Drukhari and various whatnots for Eldar and Dark Eldar and such it is multi faceted. Eldar never called themselves Eldar, that was what others called them. The new names are their actual racial monikers. It does not hurt marketing due to Eldar being a Tolkien term.
You must log in or register to reply here.