I have an issue with Ubi games in general, that I pick them up and I have to really try to play through the first 4/5 hours before I get 'into them'. It happened with Origins, WD and Odyssey and I ended up putting them down to return to later. Anyway, I'd heard great things about WD2 in contrast to WD1 so made some time to drive through the complete story, side missions and quests etc.

I think the internet is not the best place to draw collective opinions. I mean I'm not one way or the other really but when you hear that Aiden was too edgy and try hard as a character and the game was roundly blasted for it, you expect something a bit more elevated or subtle. Honestly, I think WD2 has the same problem as Odyssey in that respect 0 where character traits are being confused with actual character. I think Bayek and Aya were much better characters than Alexios and Kassandra for instance - but the win goes to Odyssey because you could play as Kassandra.....rather than comparing the complexity of Bayek to Alexios. Similarly I find it hard to believe that replacing Aiden becasue he was too edgy


With characters like Marcus, Wrench and Sitara didn't really address the problem. And got a pass because there was more of a theme or pop culture appeal. I mean these characters are not try hard/edgy? Reallllly? 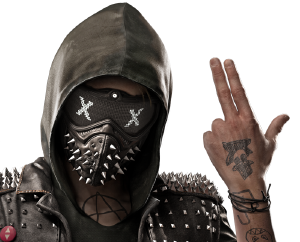 Anyway, I just wanted to point that out because character wise, I don't think it was improved at all. Not necessarily made worse but it's just a model swap in terms of characters for me. I thought Aiden's story was much more focused and coherent whereas Marcus was a ittle more stretched and flimsy. However, given this game was more of a sandbox in my opinion with strands (TM Hideo Kojima) of main storylines it didn't affect the overall perception or my enjoyment of the game, I just didn't really engage with the ensemble cast.

In terms of the game itself, it was much lighter in tone - there were a lot more options in this game. I didn't even buy a deadly weapon in this game which I thought was critical in WD1 at some points. Probably best to list thoughts at this point:

Cars: Felt like they lost a bit of overall 'weight' compared to one but felt there was more variety as well (e.g. the small electric Merengue compared to a jeep). Bikes are awful.
3D printing: Felt like a gimmick to be honest, would just have preferred to have gunshops like GTA
Quadcopter: Was essential in my opinion to get full enjoyment, there was no need to lock it behind stealing moneybags (research points etc. were unobtainable without it). For the sake of twenty minutes farming cash bags it felt kind of a pointless exercise just to draw out a bit of extra playtime.
NPC: There were some good interactions (below in GiFS), but after playing RDR2, I was missing that next level of NPC interaction. I coudln't do anything with them. I could use the emotes and get a canned response, if I was lucky I could catch some funny/cool NPC:NPC interactions but I honestly stood round wanting more. I wanted to be able to grab people and put them in car boots, wanted to be able to have more idle interactions like sit next to people, lie down as they played guitars. It's a bit unfair to judge too heavily on this but I think Ubi have this great open world now and these are the tjhings that can elevate it. I'd drop the emotes until they are actually useful.
Hacking: Much of the same in terms of traffic. I did miss the random hacking of people's houses/webcams though. I thought the profiler was better in WD1 as well. I liked the fact that drawing attention was almost a certain death in the restricted areas so you had to really commit to hacking. Rewarded careful planning. Stealth takedowns took way too long though - a theme that continued into Odyssey which I really don't like. Opportunism loses out to animation completion. I think the additional skills like IED/Electro shock on the drone were well thought out as well as the physical hacks the RC jumper could perform were good additions
Quests: I think Dusan was wasted as a villain, the spider tank and data centres were done creatively enough but overall I don't think the story was really impactful. I really disliked the 'planning missions'. Might have been the $911 side mission. Thought they were cheap and just padding. I actually thought the Intel side missions were more interesting and varied and I remember them more fondly (e.g. catching the swatter, the intelligence recruitment hack etc.)
Weather: The Chicago weather was just much better. The rain and thunder. The rain felt too ethereal - not sure if this was a technical choice. I gues it fitted the overall light and wacky vibe of the game.
Online: Modes, imput and options were all improved from what I tried but I'm not reall a WD multi fan in general.
Stores: If you're going to put stores like coffee shops in your game, make them worth visiting except for an animation. Coffee = caffeine, maybe a focus boost or something for 3 secs (like the Witcher 3 grindstones/armor tables for example). I vsited them for the roel playing aspect but maybe make them a bit more meaningful.
Levelling: I really like what they did with the levelling ssytems and skill points. You could invest in basic skills to a point with normal currency (research points), but then you could actively seek out specific skills via pickup puzzles. I liked you could accumulate them all if you wanted as well.

Overall I enjoyed my time with it, think I have around 55 hours clocked in and a few little side trophies I might pursue for the challenge or not. If I had to score them against each other, I still prefer WD1 over 2 by maybe a .5 of a mark. I like the look of WD3 but I'm a bit worried this series still doesn't know what it is or what the players want from it.

Couple lost and arguing about directions

Woman going apeshit on her ex boyfriend for cheating

Marcus being a misogynist

The aftermath of swatting a streamer who swatted other streamers.

Where do they get their info from?


In the game you can scan each person walking around. I like looking at their job and income

No retail pharmacist in San Francisco makes that little

cormack12 said:
I think the internet is not the best place to draw collective opinions.
Click to expand...

I remember playing the free trial of WD2 when it came out and it didn't really intrigue me.

Hopefully the new WD will revamp the franchise.

I tried so hard to like WD2, but the characters and even story felt such a step back. Loved the city, but everything else was just kind of eh.

Started it today. Turned out you can play it as a non-lethal stealth game.
You're given all the tools to make it a challenging little sneak-game with the required tools and some fun ideas.

....actually kinda good?
You must log in or register to reply here.

What actually is Watch Dogs and how can it be fixed?