We ever get an explanation for why Link's hair was pink in LttP?

Probably something to do with the bunny?
E

shadyspace said:
Probably something to do with the bunny?
Click to expand...

That's my guess. Why couldn't the bunny just be yellow, though?
B

cause he was gay in that version
P

...I don't know. All the artwork of Link for ALttP showed him with golden blonde hair as usual. Maybe it was an art direction thing to make his sprite "pop" more?

I think it was a palette issue or something, but even Mario World had some off colors for Bowser and such. Hylian deoxyribonucleic acid contained an oddity: Until the completion of puberty, all male Hylians hair glows a pinkish colour when exposed to air. Its why they all wear hats.

When the Sacred Realm / Dark World collapsed, the radiation released seeped into Hyrule and mutated the Hylians so that they no longer had this characteristic. The same radiation also slowly transforms A Link to the Past Hyrule (overflowing with abundant life) into The Legend of Zelda Hyrule (an irradiated wasteland, in which people live in caves as natural "radiation bunkers" to protect them from the radiation).
B

Because he's from japan
E

Boney said:
Because he's from japan
Click to expand...

but hes from hyrule
D

he wanted to be a unique snowflake.
G

Billychu said:
but hes from hyrule
Click to expand...

I always thought the liner of his hat was the pink part. Explains why the rest of his hair was okay.
T

Dunno, but its the single biggest thing that bugs me about LttP. Well, okay, Link's sprite in general.
S

Official art portrays his hair as brown.
Click to expand...

But he has brown hair in Zelda 1?
P

I don't know, but just know for every blade of grass he cuts he's thinking about your dick.
W

They really need to include an alternate color scheme in the next Smash with Pink Hair.
S

Billychu said:
but hes from hyrule
Click to expand...

every hero in a japanese game is secretly from japan
F

I always thought it was just a big lipped end border of his hat?
B

He was young and didn't know any better.
E

Smision said:
every hero in a japanese game is secretly from japan
Click to expand...

Bugged the crap out of me the first time I played Link to the Past.
E

Because it's the best zelda game of all time.
E

They had 256 colors to use and the closest one was pink.
R

The NES and SNES would have some strange color pallettes.
I

Shed_a_Ninja said:
The NES and SNES would have some strange color pallettes.
Click to expand...

I don't think this is quite it - SNES had a nice golden color available, but the palette for Link's sprite doesn't use it for whatever reason.

EDIT: I always figured it had something to do with making it easier to tell what was what within the sprite. Similar to the way Mario got his moustache.
C

Deadbeat said:
I always thought the liner of his hat was the pink part. Explains why the rest of his hair was okay.
Click to expand...

Flying_Phoenix said:
I always thought it was just a big lipped end border of his hat?
Click to expand... 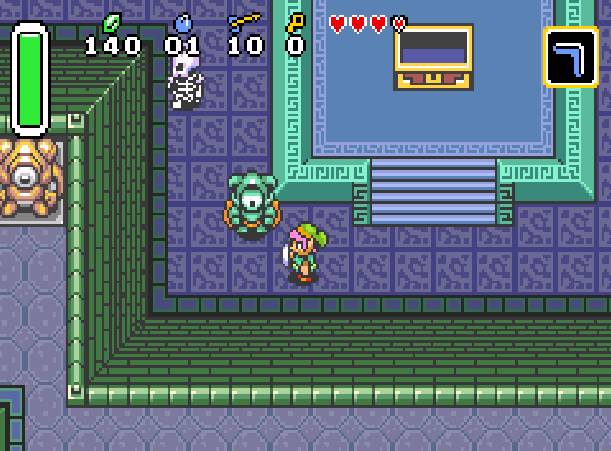 ?
He already has a border around his hat. His hair is clearly pink


Eusis said:
They had 256 colors to use and the closest one was pink.
Click to expand...

His boots were brown though.
I

Link said fuck the artwork, and decided to try something new. So he dyed his hair Pink.
F

Never noticed or thought about this.
L

Hmm, looking closely at this image you can see that Link already has a lot of golden brown shadow around his face. I guess pink was chosen so that his hair would stand out more against his skin.
S

?
He already has a border around his hat. His hair is clearly pink
Click to expand...

Idk man, i always refused to believe that was his hair as well


He has the Pokemon "white hat that looks like hair" syndrome

I love LTTP Link's sprite though, wouldnt touch it
E

Chet Rippo said:
http://i.imgur.com/WYHYD.jpg ?
He already has a border around his hat. His hair is clearly pink

Well clearly it was pink hair and brown boots, or brown hair and pink boots. And pink boots are even harder to take seriously.
W

LttP Link can pull it off, that's why.

EDIT: I always figured it had something to do with making it easier to tell what was what within the sprite. Similar to the way Mario got his moustache.
Click to expand...

Yeah I think so. His face is also similar to the color his hair should be.

Maybe that it explains it, maybe not
G

everything was like bright colors in the early 90's
F 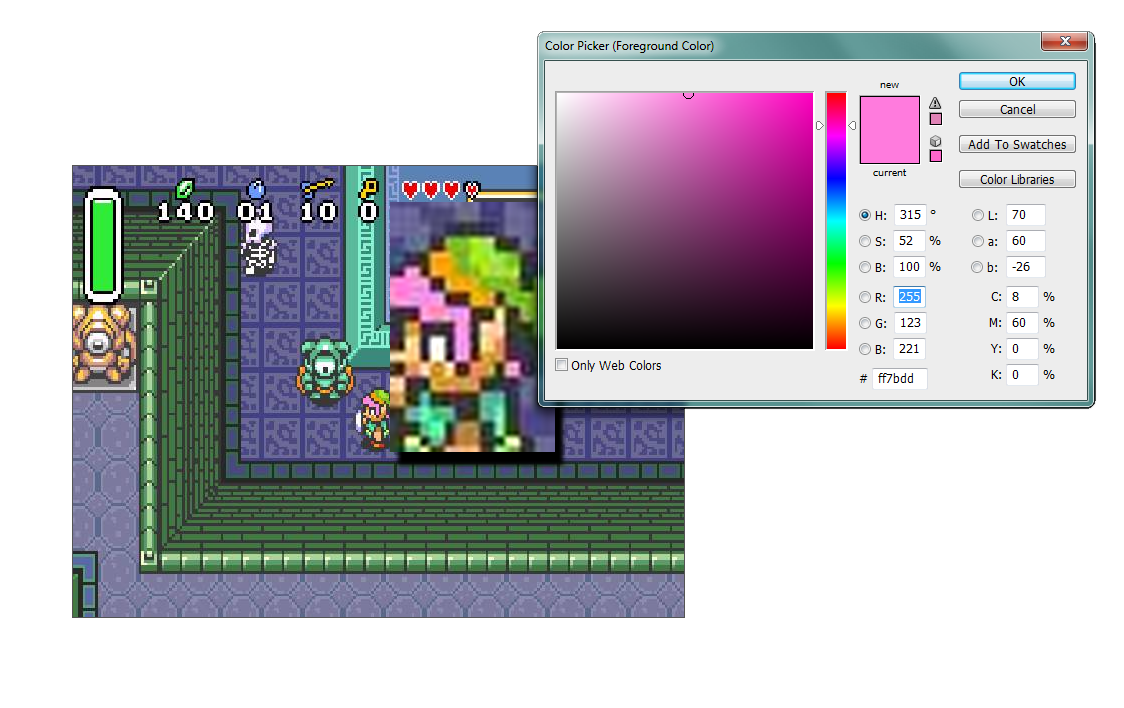 He was clearly going through that rebellious stage of his teen years.
S

Actually, for a more serious answer I do imagine it's a combination of system limitations and habits formed from NES development where colors were limited to, what, 64 on screen? And 8 per character? Undoubtedly most designers were used to going "screw the official art" and just making up whatever for the games themselves, that only seemed to actually go away for the most part with the 32-bit generation. Just look at each of the mainline Final Fantasy games, Cecil's hair is less pretty and more Doc Brown outside of the menus, Butz/Bartz has brown hair and dresses like a normal person, and Terra has green hair rather than being blonde while the Magitek Armor is more generic looking rather than resembling a robot dinosaur you pilot.
N

I thought every Link was a different person altogether. So why is it so hard to accept this particular Link had pink hair?

Didn't know Link was into Glam Rock and Jem.

Are you insinuating anything because Link can't get a girl, wears short shorts, has Pink hair, and has a Fairy he's different?
You must log in or register to reply here.

Why is there no scientific explanation for the drop in Covid deaths?