After a few years of playing CS obsessively back in 2000-2002, I've been exclusively on console for about 20 years now. Here are the things that really got me interested again:

Here are the areas I think PC still needs to improve:

I am however saddened by what's happening with Epic and platform exclusives, however I'm not going to bother expanding on this in this thread.

Anyway, I'm curious whether anyone else has recently gotten into PC gaming and what was it that convinced you?
Last edited: Jul 11, 2020

For me it was the ability to play at more than 30fps and have faster load times with SSD. One thing I love more though is the sheer amount of free/cheap games you get. The consoles simply cannot match this.

I was thinking about moving back to both next-gen consoles as I feel like I’d be missing out on the buzz but it makes no logical sense to get Xbox now. So I’ll be half joining the party with PS5 and using my PC for the Xbox titles.
Last edited: Jul 11, 2020

A sense of smugness is enough 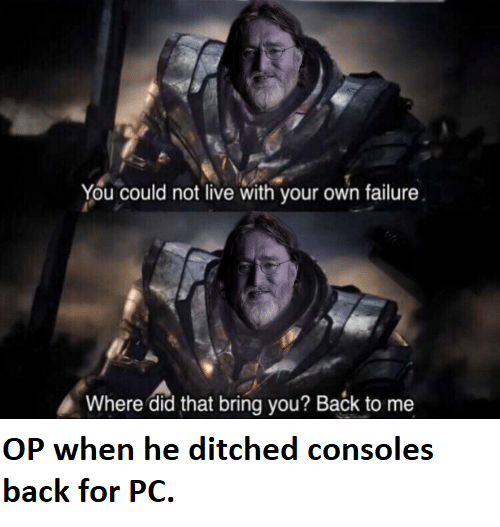 All I'm reading from this thread.
Reactions: DoctaThompson and God Enel

All I'm reading from this thread.
Click to expand...

haha! Na I'm not ditching consoles. I still can't get Nintendo games anywhere else and I still prefer to play Halo with a controller.

And I'm positive there will be PS5 exclusives I will like, even though there were literally none this gen that caught my interest. I bought so many yet couldn't stand to play them for more than a few hours.

The only reason it was worth gaming on PC for me was the ability to Mod. Skyrim is for that reason one of my favorite games ever, the replaybility for that game with mods was insane and there were so many of good mods, There were YT channels that did weekly highlights of cools mods. The 2nd and 3rd reasons were Diablo and Starcraft.

PC gaming is pretty great right now with more and more console games making their way to PC. And as T-Cake stated, so many free games. I have not spent a dime on Epic and have about 2 dozen free games so far. And they are not half bad games either.
Reactions: DoctaThompson

and I loving it
You must log in or register to reply here.

Anybody thinking of switching from PC to console?

Apr 7, 2021 started KyoZz
Jul 6, 2021
Knightime_X
I find it baffling that in 2021 "next gen" consoles and new motherboards still mostly ship with a 1Gb/s Ethernet port