Never understood frame rate limiters. Completely pointless in my view specially with sync/free sync that basically every screen has at this point.

Kenpachii said:
Never understood frame rate limiters. Completely pointless in my view specially with sync/free sync that basically every screen has at this point.
Click to expand...

Thats because you never tested and never watched the video. How can up to 70 % more responsive game because of Afterburner's frame limiter be pointless ? VRR doesnt eliminate fps variation. You want consistent framepacing - you need frame cap. Of course an unoptimised game will stil have framedrops even below 60. Still in that case frame limiter will make it feel smoother as varation will be lower.
Last edited: Dec 23, 2021

ParaSeoul said:
PC has too many issues iirc
Click to expand...

It's a highly demanding game when set to all ultra. Are you going to spout this shit in every single topic? We get it the PC isn't your thing.

Kenpachii said:
A lot of settings on PC games are there for future hardware. the same goes for witcher 3 and witcher 2 and cyberpunk.

If your game doesn't die out on top end hardware at ultra settings then u are not pushing the settings far enough in the options.
Click to expand...

This. Not being able to run a game completely on max settings does not equal problems or bad port. Unless max settings looks like a console game, then it's a problem.

MightySquirrel said:
Thats because you never tested and never watched the video. How can up to 70 % more responsive game because of Afterburner's frame limiter be pointless ? VRR doesnt eliminate fps variation. You want consistent framepacing - you need frame cap. Of course an unoptimised game will stil have framedrops even below 60. Still in that case frame limiter will make it feel smoother as varation will be lower.
Click to expand...

- Dam so i should just cap my framerate to 60 fps, and i get 100 fps uncapped smoothness.

See how fucking dumb that statement is

- VRR sole purpose is to deal with FPS variations, so your screen doesn't shit the brick with graphical glitches like stuttering / juddering and tearing.

I have to cap my framerate to 90 fps because that's the lowest it goes because otherwise no point.

My responsiveness is now 100% worse in combat and 80% of the game with my gpu barely being used. yay. Totally worth the upgrade.

That's exactly why his example in that video was so fucking dumb. capping outside of the map at 10 fps loss for perfectly smooth framerate ( 10 fps my ass ). Yea more like a 40 fps reduction because the moment he gets into combat its gg. Who the fuck does that. Be real.

Hell i don't even cap my framerate in my VRR refresh rate. as VRR starts to become useless at high as shit framerates anyway, i won't notice it for shit. It's more useful in the 20-120 bracket then 144-240.

Also his ms fluctuation at 100 fps is perfectly normal u won't notice it for shit on a vrr screen. his 55 or whatever shit show he had going on was not, because he runs into hardware limitations.

The moment i throw a texture grenade in your face when the v-ram is already shitting the brick, caps aren't going to solve your problems, reducing settings are exactly what he already did.
Last edited: Dec 23, 2021

Oh the joys of the magnificence fps limiter when a locked 60 fps can feel as smooth or smoother than 90 fps game that is maxing your gpu.

amigastar said:
I used this chart for my optimization 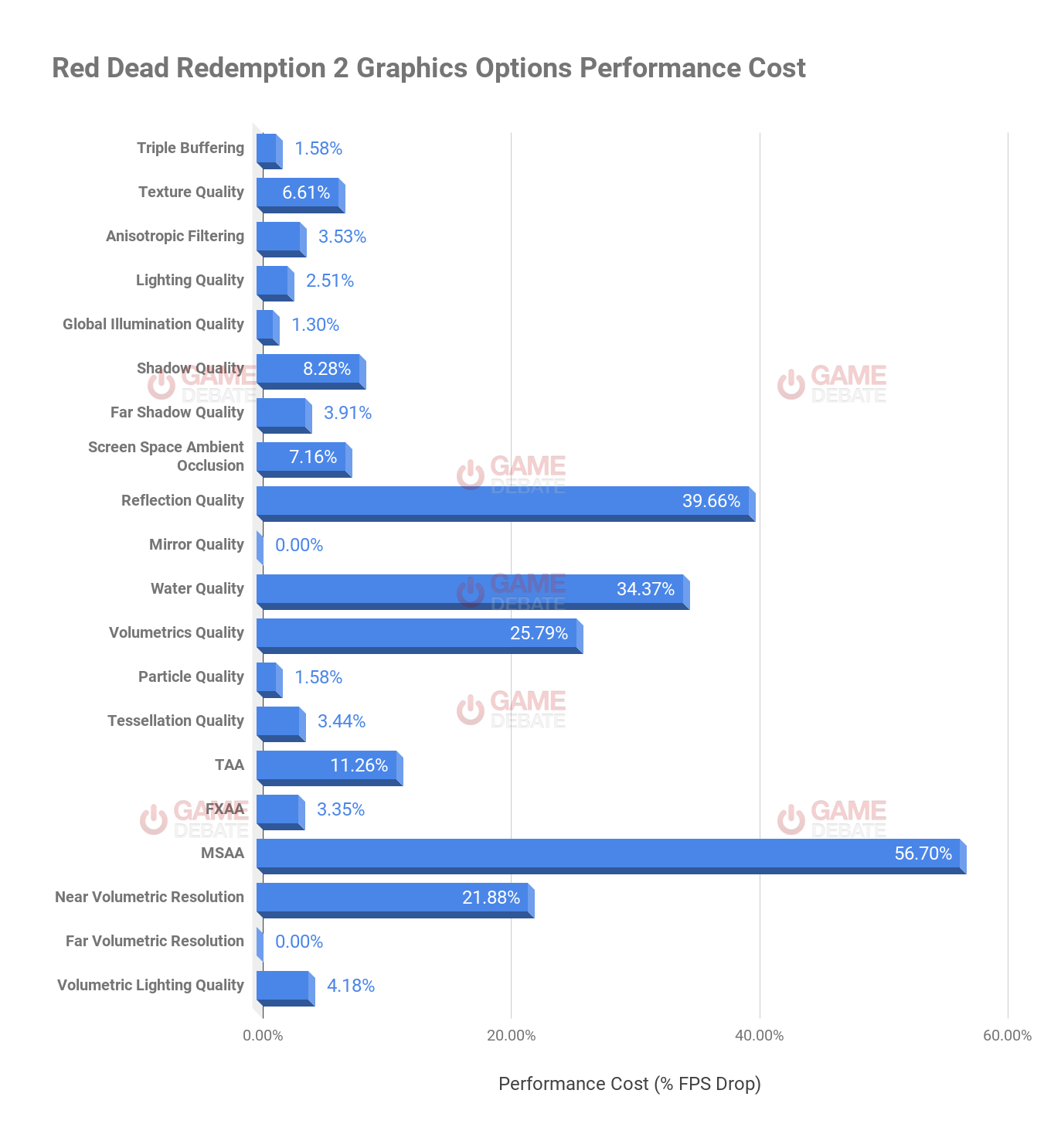 Gonna use this later and see if I get better performance. I’ve always used the Nvidia optimization tool and it sucks. Have to make additional adjustments in-game to get respectable performance on my 2070.

Hardware unboxed had a great video on rdr2 optimized settings, but since op has 3080 ti it's not very relevant.

Performance in Saint Denis is something else.

I've downloaded MSI afterburner and I'm not into playing out with setting regarding GPU performance, specially that I got the 3080 ti and I see no fucking issues with it just like that. the fans the noise are not an issue for me its quiet out there.

yes the app is useful but not for me at the moment i faced no issues and regarding RDR2 now its smooth and the framerates are stable most of the time with ultra, and no .. RDR2 is not well optimized, other games are running smooth but this one took me time to figure the best performance and still its not 100% optimized
C

Captain Hero said:
I've never used DLSS form what I saw its not as good as native 4k and I could be wrong
Click to expand...

Its good but still get ghosting on vegetation. The level of detail with all the grass on this game is mental.
P

Krappadizzle said:
Don't play on ultra. The insanely miniscule gains are not worth the massive loss in framerate. It's been this way for 20 years or so now. Or use some of the upscaling tech that's been added since release. Or both.
Click to expand...

Disagreed. They make a big difference in motion. But they are truly "ultra" settings, they come at a cost for a reason. Reflection and Near Volumetric Fog has the biggest impact imo. Achieving native 4K (or via DLSS) remains the biggest increase in IQ however. Push for that first, then worry about ultra settings.
Last edited: Dec 23, 2021 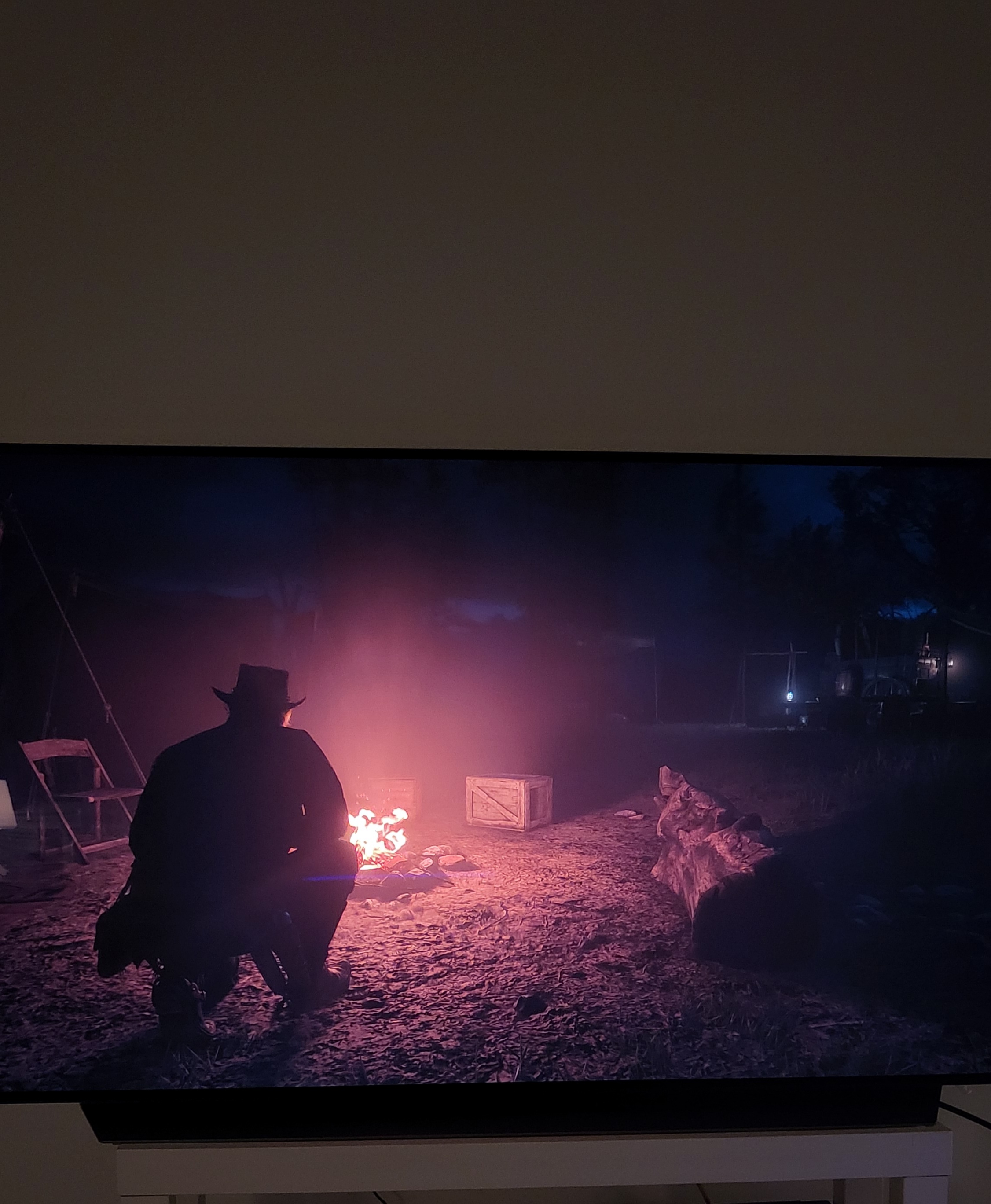 amigastar said:
I used this chart for my optimization

MightySquirrel said:
The most important factor in perceiving game as smooth is consistent frame pacing = same consistent input delay at all times. Only way to do it is by capping your framerate. Uncapped frames = inconsistent input not a smooth experience. VRR doesn't fix variable input delay on it's own.

Oh the joys of the magnificence fps limiter when a locked 60 fps can feel as smooth or smoother than 90 fps game that is maxing your gpu.

clearly they haven't even watched the video at all

thankfully nvidia developed reflex for such situations that removes extra gpu-render queue EVEN in max load situations but i still find the %70-80 gpu utilization+ fps limit snappier. its not even about multiplayer games, i just like my games snappy, that's all. and sadly reflex is not present in the games i'd like it to be (like rdr 2, cyberpunk etc.). it is in god of war though, so im happy. im sure there are a huge amount of ignorant people who is like "what the hell is reflex for in single player game". snappiness adds sooo much to a game's gameplay quality. it can even define / redefine certain games. but yeah... preach to the choir here.

its possible to add reflex to games with Special K but its a bit hassle and compability issues may be present. i also like to use DSR in RDR 2 and found special k extra incompatabile with my usual DSR+DLSS combo. i ended up limiting framerate to a place i can feel reliably hit at all times. finding that place can be hard though. so i'd still like to have reflex. for cyberpunk, that framelimit had to be 45 so it was not so good. i'd really like to have native reflex on Cyberpunk. i tried special k's reflex on this one and it worked okay enough. at least removes the heavy lag effect that max out gpu load presents
Last edited: Dec 24, 2021
You must log in or register to reply here.

Kenpachii replied
Aug 30, 2021
Which RTX AIB is best? What setup has the least bottlenecks?
Hardware