WanderingWind said:
Ahahahaha...man. Those were some dark times. When people are like "Avengers sucked" I'm like, compared to what? I feel this is like when old people are just grateful when they piss when they have to, or a ex-convict just enjoys the sunshine or some shit.

I mean, Elektra was garbage, right, but was it worse than Dean Cain's entire existence? I dunno. I leave those types of questions to the bigwigs in Washington. I'll just get stoked for Wonder Woman and Captain Marvel making it to the big screen.
Click to expand...

DaveH said:
In a decidedly campy take, sure, but I can't cross that bridge into reality. Short of prosopagnosia ("face blindness disorder"), they're the same guy and look like the same guy to me. It's nice acting for a melodramatic cartoon, but it's not believable in the real world.
Click to expand...

Combine that with the differences in posture, voice, mannerisms, and the fact that most people (in-universe) don't really know that Superman has a secret identity, and I have no trouble believing it.
X

Combine that with the differences in posture, voice, mannerisms, and the fact that most people (in-universe) don't really know that Superman has a secret identity, and I have no trouble believing it.
Click to expand...

I get what they were doing but reeves portrayal was bordering on slapstick. Just very cheesy that wouldn't go over well nowadays. Not to mention it makes you wonder how the hell this guy got a job at such a prestigious news organization.
P

Yeah, he took it a step too far, but making the body language different enough is something most adaptations ignore.
T

That's how the Superman comics were - kinda slapstick. We're all into this new Frank Miller gritty shit these days.
X

I was never denying that's how the character was at the time just saying I'm not a fan of that version of the character. Just like im a fan of green lantern but I don't want any modern versions to have a side kick mechanic Inuit named pie face. Or the Hal Jordan that punches yellow pterodactyls on Venus. As hilarious as those things are. Or a batman movie with the goofy zany version from the 50s or 60s.
D

I have no trouble believing it.
Click to expand...

I know the traditional handwaves and they're enough to get you by if you accept the trope, but they're not realistic. In a campy universe, fine, everyone on the planet makes the same assumption and suffers from low grade aphasia... but I don't think the films were ever trying to make you believe this would work in the real world.

Even at his campiest in the comics, note two things:
Honestly, I kind of wonder if Jerry Siegel suffered from some sort of aphasia because in the Golden Age (with masked vigilantes before, during, and after his run), he would write Superman impersonating maskless individuals without any explanation whatsoever. For example, in one story, Superman helps a down and out Heavyweight Boxing Champion Contender by impersonating him and getting him a title shot again... a contender is an individual famous in his own right... Superman would just don a pair of shorts and boxing gloves and everyone would think he was the same guy (even punching out multiple opponents with one blow for the cameras in one part, so his face is on record).

So it seems more a part of the tradition of Superman than something meant to be taken seriously as an explanation.

No one is going to have difficulty telling these people apart: 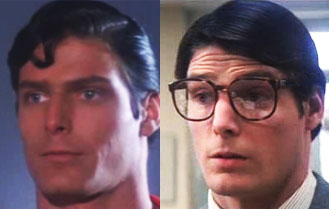 No one is going to say, "Is that Henry Cavill or Tom Welling? I can't tell, I'm not certain!"

You might be able to pull off uncertainty in a stranger as in your McDonald's example, but that's not going to hold up with co-workers and friends... or modern times with cameras everywhere. We might all have a laugh on Reddit at look-a-likes... but that's because those cases are typically where a dual identity is essentially impossible... in a case like this, someone puts a picture of Clark Kent on Reddit saying, "Haha, I found Superman in civies!"... someone is going to take that seriously, run it through biometrics, or start putting scrutiny on Clark.
F

For Superman/Clark Kent, I'll go with Christopher Reeves. For me, it's because he really did make you think that Supes and Clark were two different people. He sold it with physicality. Every other live action Superman/Clark felt like they were the same person. Welling's Clark and Supes were the same in everything, from voice to behavior, ditto for Cain and Cavil.

If you didn't know better, Reeves would've had you thinking that they were two different characters, played by the same actor.

Lois is easy too: Margot Kidder, although I thought Erica Durance did a fantastic job with her, despite me not caring for her earlier appearances as Lois. She really grew on me in later seasons.

Lex is a lot harder, because I've yet to be disappointed with any incarnation of Lex I've seen. Clancy Brown IS Lex Luthor, and I don't get why they don't have him playing him in any live action version. I always liked the idea of Lex being older than Clark, hammering home the mortality of Lex, and how that is rarely an impediment to him being a threat to Superman.

Hackman, Spacey, Shea, and Rosenbaum all did great jobs with the Luthors they portrayed too. Even James Marsters in DCUniverse did a great job as Lex. This one is really tough, because they all brought a nice layer to Lex. Hackman is up there, because he's clearly having fun with the role, but I think Clancy Brown's Lex is truer to the character.

Hell, the Animated DC Universe is the best portrayal of the DC Universe in television/film, period, in my opinion.
P

I can pretty much give or take most Supermens or Lex Luthors but I wanted to give a shoutout to Durance for nailing Lois Lane. Like, the fact that Kate Bosworth and Amy Adams came after her is mind-blowing to me - they are so bland in comparison.

She perfectly nails that Lois Lane aspect of being totally forthright and almost up herself without crossing the line into being infuriating.

She's kinda my watermark for the comic book TV series 'love interest who will eventually end up with the hero but for now has to stand around investigating him' i.e. Laurel Lane and Iris West. Comparing Erica Durance and Katie Cassidy somehow feels offensive.

Slayven said:
Dean Cain had that hint of smugness that Superman needs
Click to expand...

Heck yeah he did 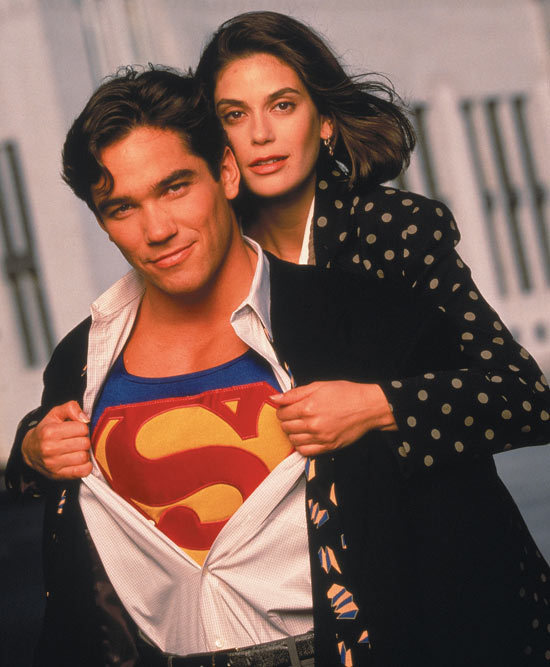 I need to buy this series
B Clark Kent- Brandon routh. He gets too much hate for SR
Lois- Terri Hatcher
Lex- rosenbaum. Goat. Even though he was bad, your rooted for him and kinda wouldn't mind if he won every now and then. I like that version than just a villain.
Superman- either reeves or routh

Never watched the Reeve Superman movies so for Clark/Superman, I will choose to not answer. As for Lois, I liked the actress who portrayed her in Smallville and Rosenbaum was a super awesome Lex.
B also I love how terrance stamp eventually voices Jor-el in smallville
Smallville was a shit storm but all the old Superman & Lois actors they put in were really sweet touches
Clark Kent/Superman=Reeves
Lois Lane=Durance
Lex = Spacey. Rosembaum gets an honourable mention for indirectly voicing lex luthor in the animated series.
S

There is only one Lois Lane.

Clark Kent - Dean Cain. No contest.
Lois Lane - Dana Delany. Arguable
Superman - Nobody. They are all flawed. None of them match some of the best comic portrayals.
Lex Luthor - Clancy Brown. Definitely the best but I can respect anyone's opinion who likes Michael Rosenbaum's portrayal of the younger Luthor.
S

DedValve said:
Smallville had a great supporting cast. Hell even Welling would have made for a good Clark if they ever bothered to grow his character past the second season.

Ma and Pa Kent, Louis, Lex, Chloe is canon dammit, anyone that wasn't the goddamn justice league or past S4 where they started bringing in Superman villains was pretty great. Made me wish Lionel was canon.
Click to expand...

Im pretty sure Chloe is canon in some dc universe. We had to draw her for Scribblenauts Unmasked, while we couldnt add other characters or versions coming from animation, tv and movies.
J

Chloe was so good

Allison Mack needs to be in more things
L

Dean Cain is my favourite live action Superman. He just seems to nail it perfectly and in my opinion he even looks the part way better than any of the others, including Reeve.
A

Damn, those pics of Welling in a suit. I might be gay?
J

Clark Kent: Dean Cain. There is literally no contest, he is the only one that actually portrayed Clark Kent. It is directly linked to his charisma with the other actors.
Lois Lane: Teri Hatcher. Teri Hatcher portrays Lois Lane as a competent writer that can hold her own against Clark. Lois Lane is often an afterthought, she is the Pulitzer winner that can't spell in the Reeve movies...
Pa and Ma Kent: Eddie Jones and K Callan. Can you find two fictional parents that you want more than these two? They're the typical sweet nuclear family, they're like having two Aunt Mays (from the first Sony Spider-Man trilogy) as parents.
Perry White: Lane Smith. As I'm listing my favorite Lois and Clark characters, I can't forget Lane Smith. He was another great choice that show made.
Jimmy Olsen: The one from the upcoming Supergirl. That is how much I like the current portrayals.

Superman: Henry Cavill. As an unstoppable force without becoming ridicolous, Cavill. Cain and Reeve Superman had a bit of a stupid power problem.
Lex Luthor: Nobody. Gene Hackman was an idiot. John Shea was underused. Kevin Spacey was bad. Rosenbaum didn't live up to Shea and was again underused.
T

Tagged as I see fit


dtrush said:
based purely on physical stature, i'd say Welling. Cavill is too short, can't take him seriously.
Click to expand...

That is a poorly tailored suit.
T

I always wanted to be sandwiched between him and Durance.

Throw Mack and Hartley in there and we have an evening of exhausting fun.

Michael B. Jordan is developing a black Superman project about Val-Zod for HBO Max
Rumor

008 replied
Feb 14, 2021
What if Rocksteady or another developer announced a new Superman game?