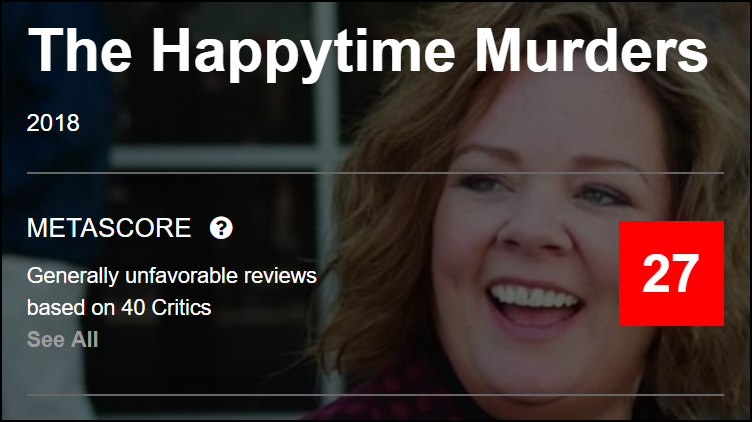 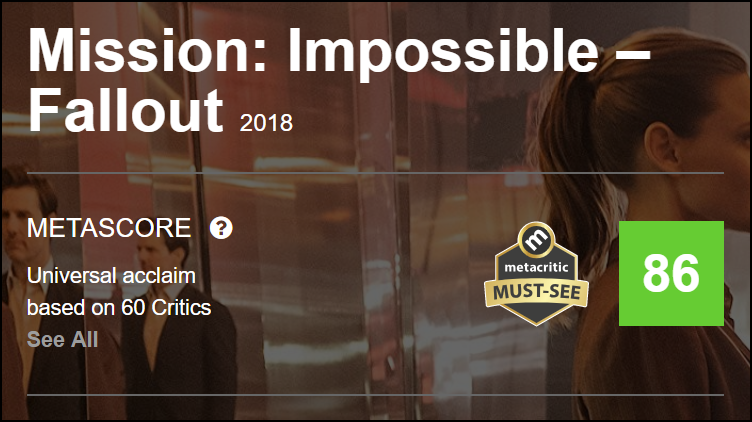 “Crazy Rich Asians” had a crazy good second weekend at the box office.

Warner Bros. acclaimed romantic comedy generated another $25 million in 3,526 locations, meaning it made almost as much during its second outing as it did its first weekend. Jon M. Chu’s movie, which has been lauded as the first studio film in over 25 years with a predominately Asian-American cast, dropped just 6% — marking one of the best holds in recent history for a wide release in any genre. Saturday’s numbers dropped an unprecedented 0%. In two weeks, its domestic total sits at $76.8 million.

“Every now and then, all the stars align, and this is what happened here,” Jeff Goldstein, Warner Bros.’ head of domestic distribution, said. “The word of mouth has just spread.”

It doesn’t get much brighter for this weekend’s new wide releases. Global Road Entertainment’s “A.X.L.” launched with a dismal $2.9 million in 1,710 venues — disastrous news for the beleaguered company. Earlier this week, Global Road’s lenders took control of the film division after the company failed to raise enough money to pay for future productions.

Warner Bros.’ “The Meg” hit a major milestone this weekend as it crossed $100 million at the domestic box office. The shark thriller stayed at No. 2, picking up $13 million in 4,031 locations in its third outing. Globally, it has amassed over $400 million.

Meanwhile, Tom Cruise’s latest mission continues to be a profitable one. “Mission: Impossible – Fallout” landed in fourth place with $8.1 million on 3,052 screens for a domestic tally of $194 million. It generated $13 million overseas, bringing its worldwide cume to $538 million.

Rounding out the top five is Disney’s “Christopher Robin,” which picked up $6.4 million in its fourth frame. That brings its North American total to $77.7 million and worldwide cume to $112 million.

In limited release, Bleecker Street’s “Papillon” launched with just $1.1 million in 544 locations. Charlie Hunnam and Rami Malek star in the remake of the 1973 film with Steven McQueen and Dustin Hoffman.

Sony’s “Searching” opened in nine theaters with $360,000 for a per-screen average of $40,000. The Sundance title features John Cho and Michelle La.

A surprisingly strong August brings popcorn season up 13.6%, while the year-to-date box office is up a healthy 9.4%, according to comScore.
Click to expand... 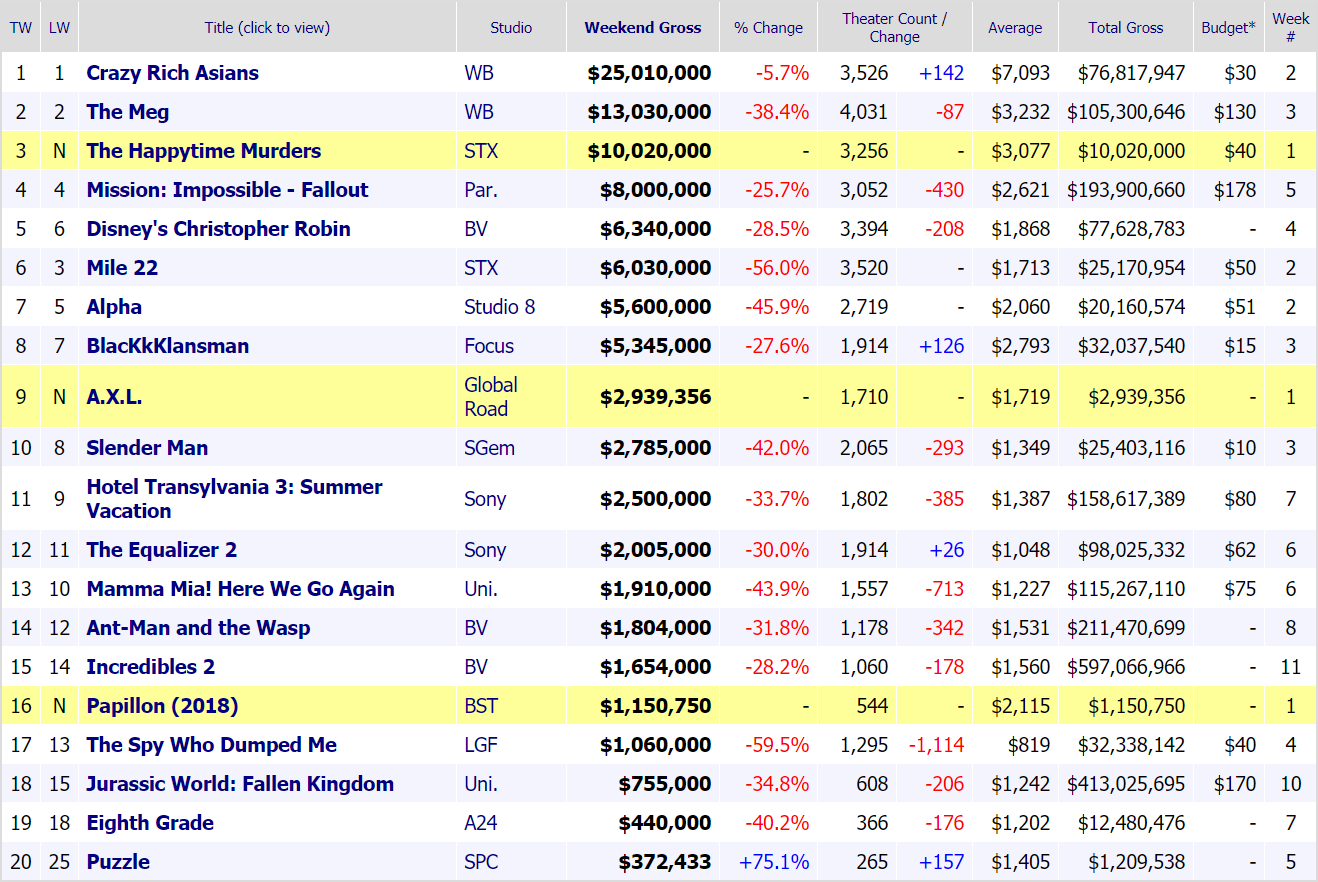 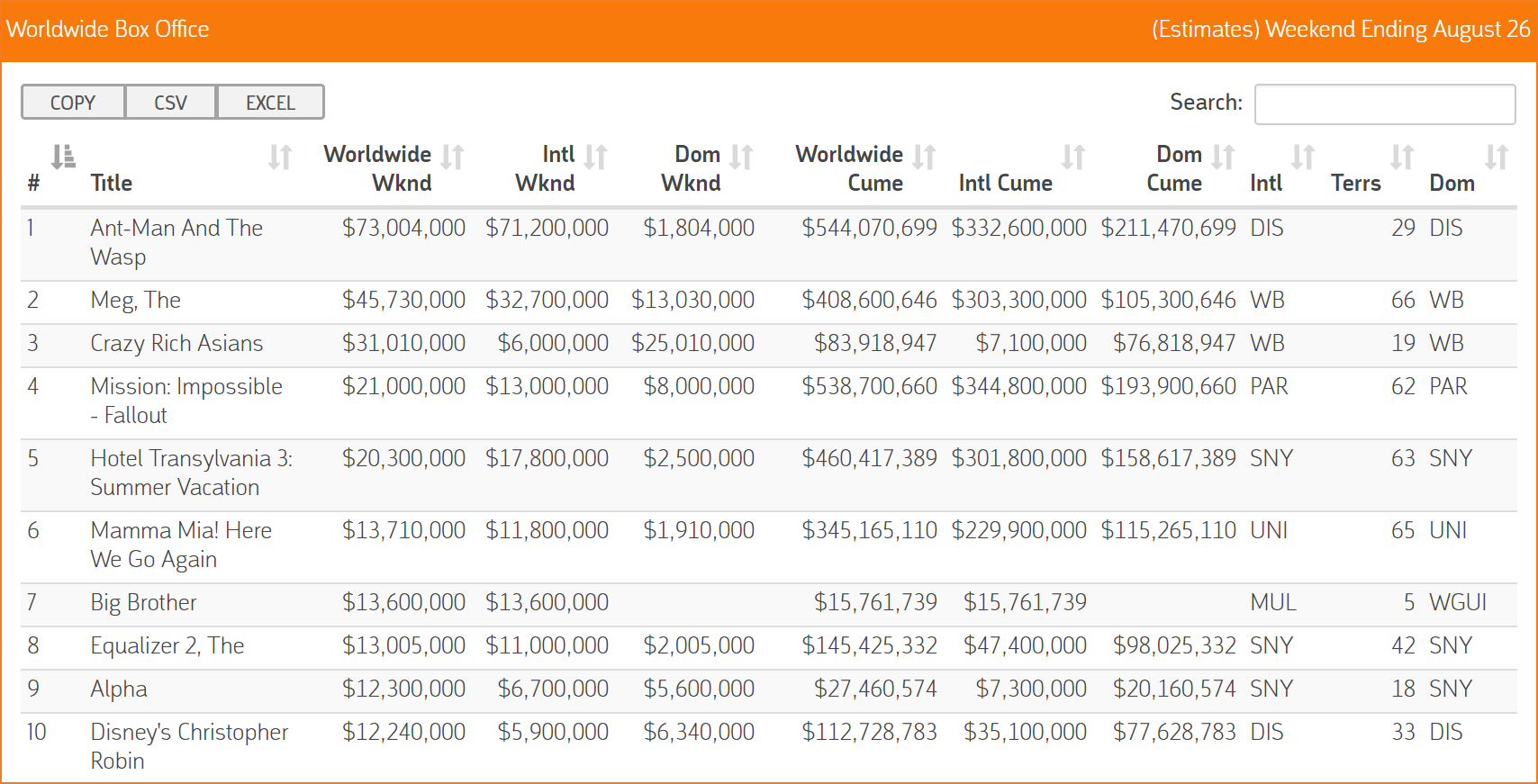 Is this pretty much the Asian Black Panther? Seems like it is building up the reputation of the Asian community.

I wonder how much Christopher Robin has made off of prequel fans alone.
You must log in or register to reply here.