68% The House With A Clock In Its Walls 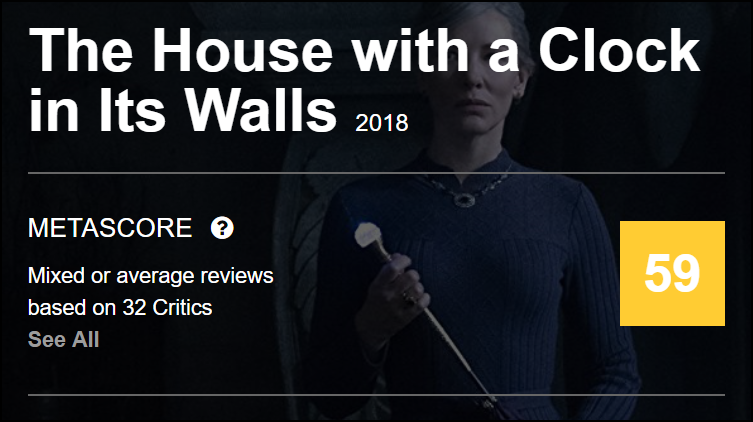 “The House With a Clock in Its Walls” easily topped the domestic box office in an otherwise quiet weekend at multiplexes.

Eli Roth’s adaptation of the popular children’s book picked up a better-than-expected $26.8 million when it opened in 3,592 locations. The fantasy film, starring Jack Black and Cate Blanchett, didn’t face much competition. A number of holdovers filled out the top five as a trio of new releases came in way under expectations.

“The House With a Clock in Its Walls” topped “Hostel” as Roth’s biggest opening to date. The family-friendly film bowed with $3.1 million overseas for a global start of $29.9 million. Imax screens accounted for $2.5 million of its box office total.

Universal’s head of domestic distribution Jim Orr said the release date in a wide open market, along with the team of Roth, Black, and Blanchett, helped bolster the film above earlier projections.

“Obviously, we couldn’t be more pleased,” Orr said. “It’s always great to kick off your fall slate at No. 1.”

Michael Moore’s “Fahrenheit 11/9,” a satirical look at President Donald Trump, fared the best among newcomers. The Briarcliff Entertainment political documentary landed in eighth place, coming in way under estimates with $3.1 million from 1,719 venues. Launching the film in over a thousand theaters might have hurt its box office potential. Most specialized films start small in a select amount of theaters before slowly expanding nationwide as word of mouth builds.

It was a good summer for docs — “RBG,” “Won’t You Be My Neighbor,” and “Three Identical Strangers” all hit double digits, but they all had modest expansions. Dinesh D’Souza took a similar route to Moore just a few months ago, opening “Death of a Nation” on over 1,000 screens. The pro-Trump doc was the worst showing for the right-wing conservative filmmaker, bowing with $2.3 million and picking up just $5.8 million. It’s a tough time to be serving up even more Trump. Moore’s 2004 film “Fahrenheit 9/11” is still the highest grossing documentary ever. It debuted with $23 million in North America and went on to earn $22 million globally.

“Life Itself,” a tear-jerker from “This Is Us” creator Dan Fogelman, didn’t even crack the top 10, pocketing just $2.1 million from 2,609 screens. That’s cause for concern, especially considering Amazon Studios paid $10 million for the star-studded drama with Oscar Isaac, Olivia Wilde, Antonio Banderas, and Annette Bening. It didn’t help that the movie was savaged by bad reviews ahead of its release. It currently holds a 13% average on review aggregation site Rotten Tomatoes, as well as a B+ CinemaScore.

Lionsgate’s “A Simple Favor,” the neo-noir mystery drama starring Anna Kendrick, Blake Lively, and Henry Golding, landed in second place with $10.4 million in 3,102 locations in its second frame. To date, it has earned $32 million. In third is Warner Bros.’ “The Nun” with $10.2 million, taking its domestic tally to $100 million.

Fox’s “The Predator” dropped to No. 4 after leading the domestic box office last weekend. The sci-fi thriller earned $8.6 million for a domestic total of $40.3 million. Rounding out the top five is Warner Bros.’ “Crazy Rich Asians.” The acclaimed romantic comedy earned another $6.5 million, bringing its North American earnings to $159 million.

In limited release, Bleecker Street’s “Colette” earned $156,788 when it showed in four theaters. That translates to a solid $39,197 per theater. Keira Knightley and Dominic West star in the biographical drama about the life of the French novelist who was forced to publish her novels under her husband’s name.

Even with the sleepy weekend, the domestic box office remains up 8.5%, according to comScore. However, the frame is down 21.8% compared to the same weekend last year when “Kingsman: The Golden Circle” launched with $39 million.
Click to expand... 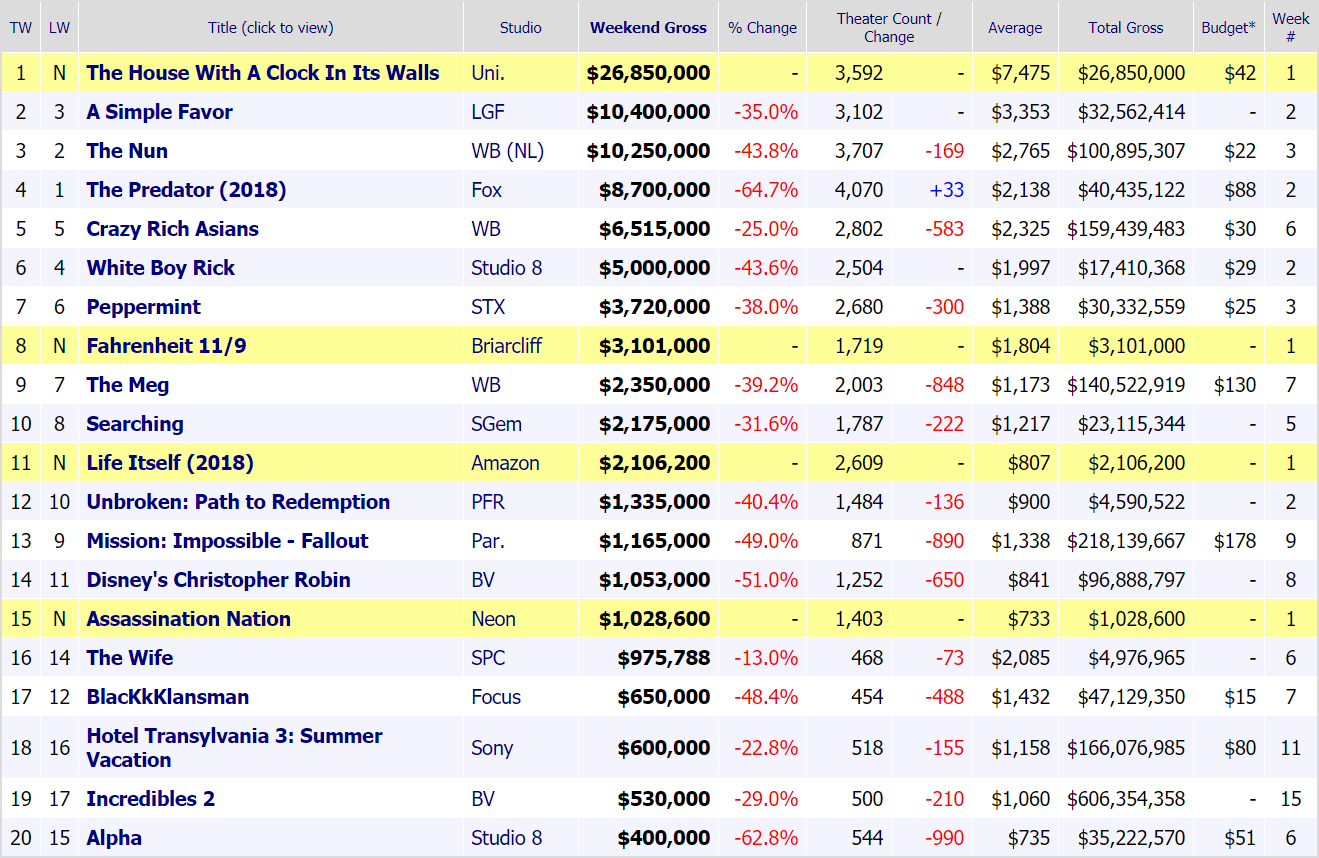 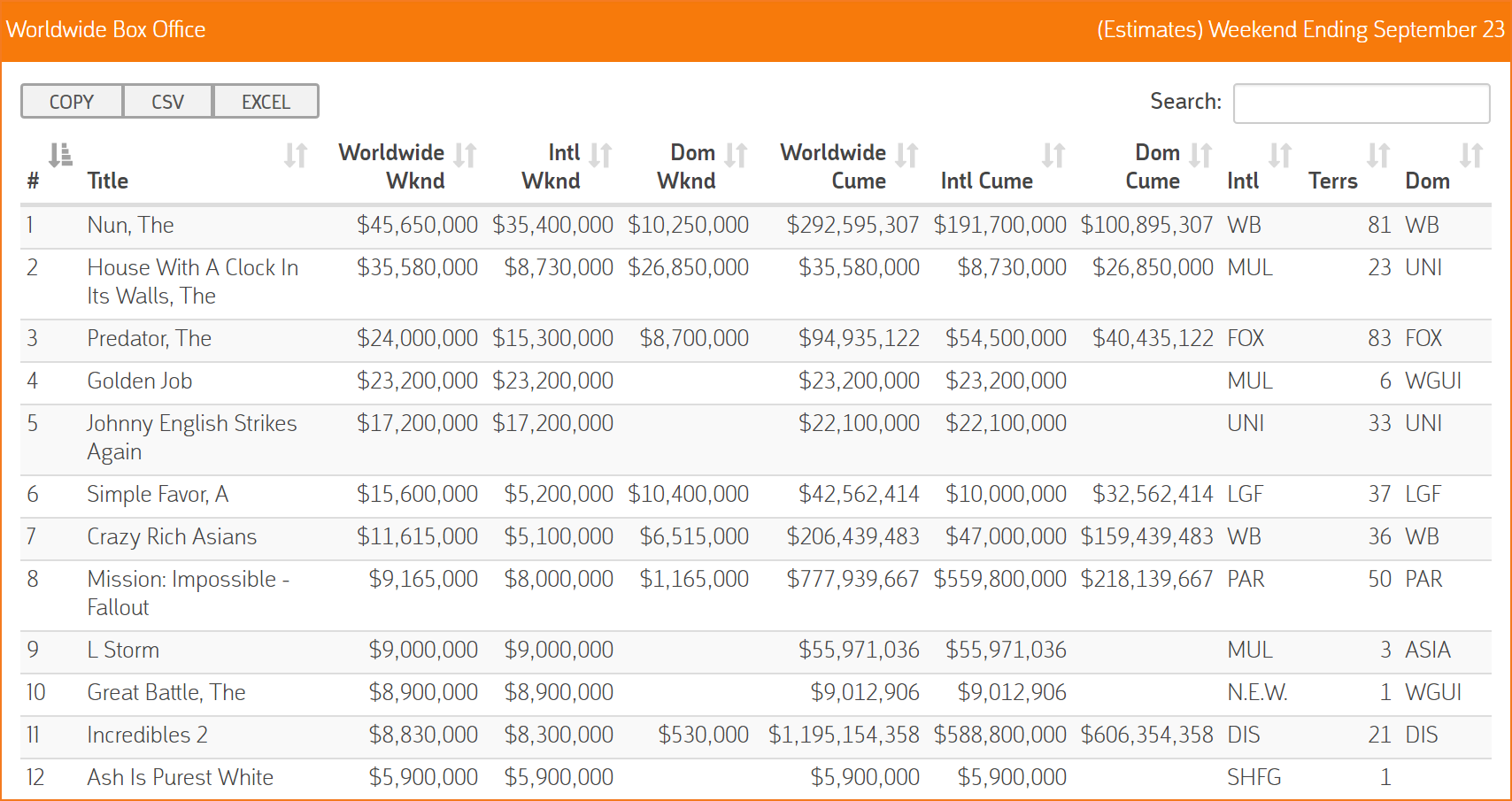 I'd take the opportunity to whine about House making so much but I did buy a ticket to see Thriller before bailing to catch the Meg.

Thats what horrible marketing gets you. All the trailers made it look lower quality than all the "north of the wall" scenes in Game of Thrones.
Last edited: Sep 23, 2018

September--February (nada)
March (captain marvel)
May (Avengers 4)
You must log in or register to reply here.