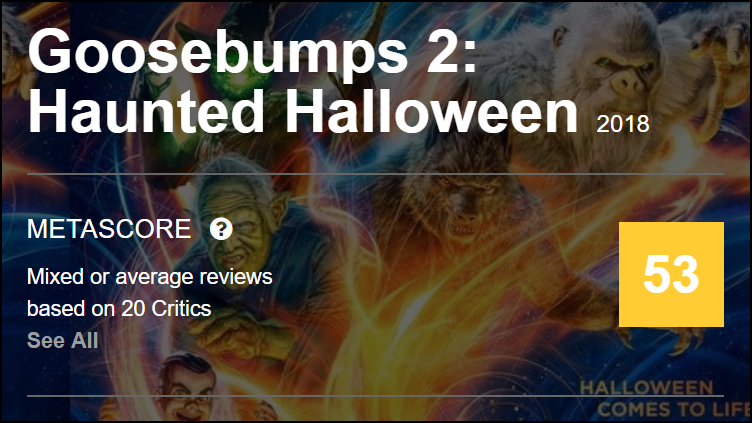 “Halloween” easily stayed No. 1 at the domestic box office in its second weekend as the spooky holiday nears.

Holdovers “A Star Is Born” and “Venom” also remained in the top five. Warner Bros.’ “A Star Is Born” landed in second place with $14 million, dropping just 26% in its fourth outing. Lady Gaga and Bradley’s musical drama has earned $148 million. The acclaimed movie hit $100 million at the international box office for a global total of $253.2 million. Meanwhile, “Venom,” Sony’s dark superhero film with Tom Hardy, came in third with $10.8 million. That brings its domestic tally to $187 million for a worldwide cume of $508.4 million.

“Hunter Killer” was, at least, able to round out the top five with $6.65 million when it opened in 2,720 locations. The audience, which was predominately male and over the age of 25, gave the film an A- CinemaScore. Critics were far less generous with a Rotten Tomatoes average of 36%.

Elsewhere, Universal’s “Johnny English Strikes Again” pocketed a meager $1.5 million from 533 screens. An underwhelming performance in the States might not matter considering the movie is virtually engineered for international audiences. The third installment in the Rowan Atkinson-led British spy series launched earlier this month overseas, where it has already earned $97.6 million.

In limited release, Amazon Studios nabbed the highest screen average of the year as Luca Guadagnino’s horror remake “Suspiria” with Dakota Johnson and Tilda Swinton generated $179,806 from just two locations, or $89,903 per venue.

Does the strong pre-holiday showing mean studios should reconsider sitting out the Halloween weekend? A lot depends on the product, and the “Halloween” sequel hit all the right elements for success — a timely theme, a beloved property and solid execution.

“It is quite appropriate that a movie called ‘Halloween’ would deliver a sweet box office treat to the industry that typically suffers a slowdown on this particular weekend,” said Paul Dergarabedian, a senior media analyst with comScore. “Universal picked a perfect release date, inspiring nostalgia and excitement among moviegoers looking for the perfect film to complement their Halloween weekend plans.”

This weekend was up 37.6% over the same frame last year when “Jigsaw” led the domestic box office, according to comScore. As the month winds to a close, October officially hit a new record in North America. The month was up over 50% from the same frame in 2017. This year’s period brought in $789 million, which was enough to top the benchmark previously set by 2014 with $757 million.
Click to expand... 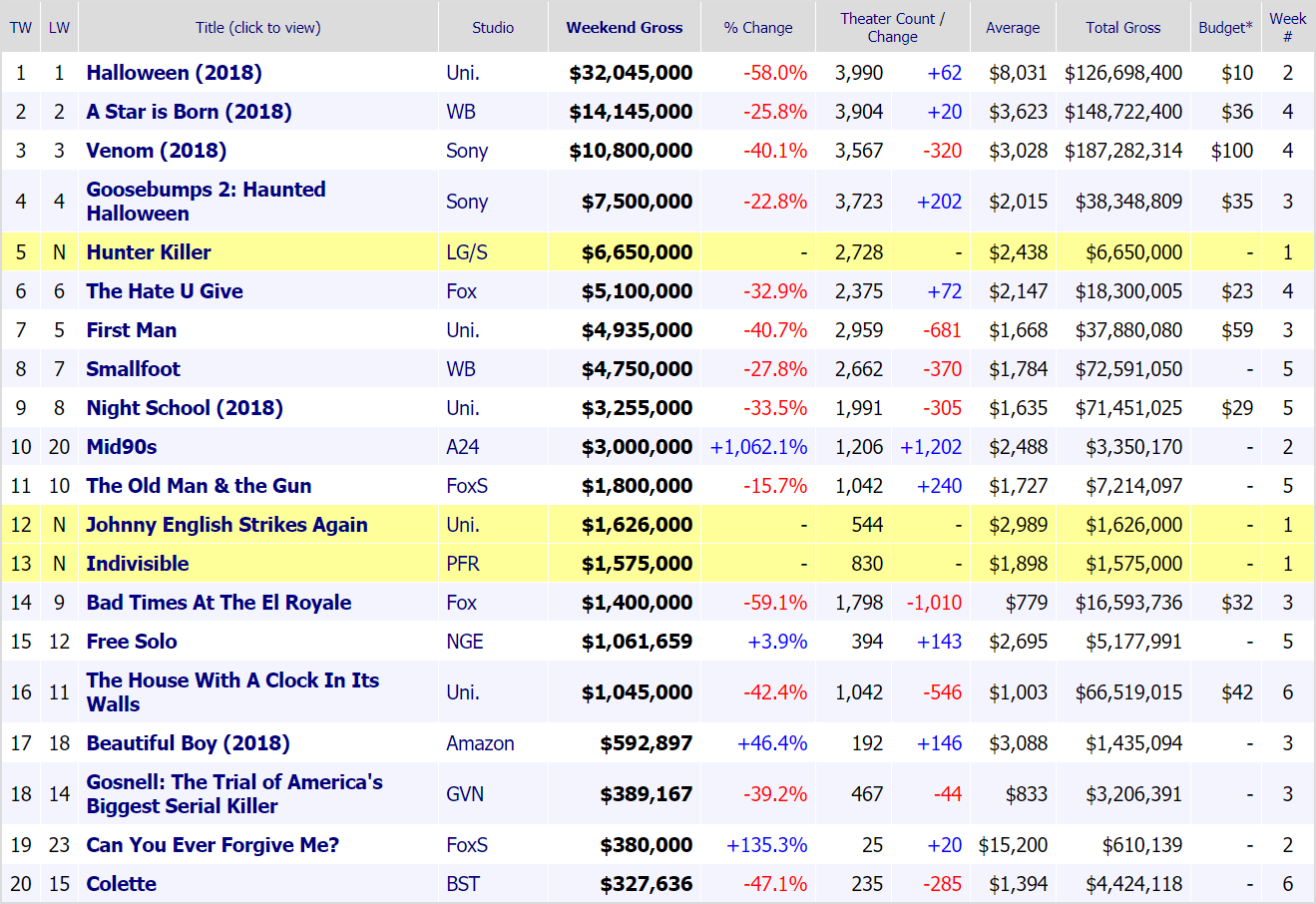 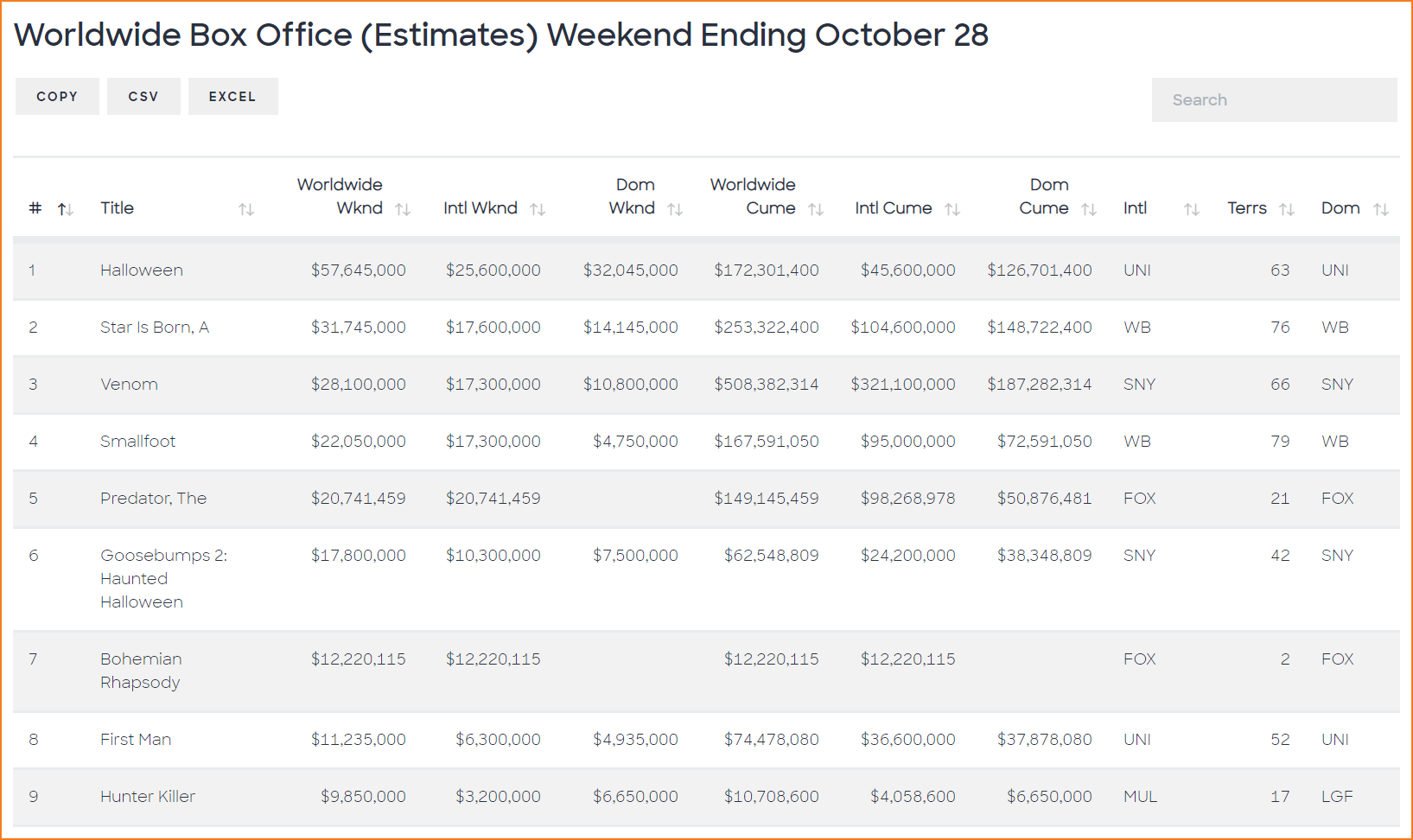 Well. Look at that. closing in on 150 mil domestic. Here's to hoping we see 200mil or more total and get a good sequel that closes the franchise, forever, on a high note.
Last edited: Oct 28, 2018

How in the world did Holloween only cost $10 million?
You must log in or register to reply here.