34% The Nutcracker and the Four Realms 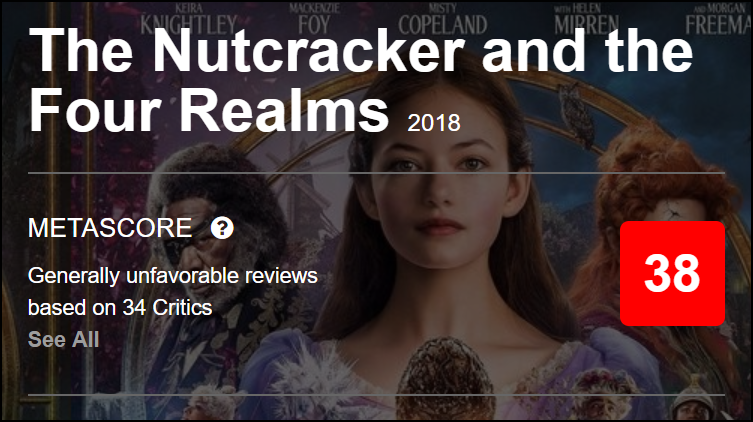 Fox’s Freddie Mercury biopic “Bohemian Rhapsody” overperformed with a rocking $50 million when it debuted in 4,000 theaters. That was enough to dominate in North America over fellow newcomers “The Nutcracker and the Four Realms” and “Nobody’s Fool.”

“Bohemian Rhapsody” ranks as the second-best start for a music biopic, following 2015’s “Straight Outta Compton” ($60.2 million). For measure, it also topped the domestic debut of Warner Bros.’ “A Star Is Born,” which launched with a solid $42 last month.

Rami Malek stars as iconic Queen frontman Freddie Mercury in the film, which cost around $50 million to produce. It’s a bittersweet symphony for Fox as the studio prepares to merge with Disney. “Bohemian Rhapsody” has generated a mixed critical response, though audiences have embraced it with a 96% on Rotten Tomatoes and an A CinemaScore.

“I’m not surprised there’s a disconnect, but audiences didn’t miss it,” said Chris Aronson, Fox’s head of domestic distribution. “That’s the power of word of mouth — and Queen and their music.”

Overseas, “Bohemian Rhapsody” bowed this weekend with $72 million for a global start of $122.5 million. Imax screens accounted for $10 million of its box office total. The biographical musical, co-produced by New Regency, opened in the United Kingdom last weekend with a huge $12.2 million, ranking as one of the best debuts in that territory. Its worldwide tally currently sits at a strong $141.7 million.

Overall, it doesn’t look like the messy turmoil behind the camera tainted anticipation for the film. Director Bryan Singer’s repeated absence from set caused Fox to temporarily halt production. Dexter Fletcher replaced Singer after he was fired toward the end of the shoot, though Singer retained sole directing credit.

Disney’s “The Nutcracker and the Four Realms” launched at No. 2 on the lower end of expectations with a disappointing $20 million from 3,766 venues, a rare miss for the Magic Kingdom given the movie’s $125 million price tag. The disastrous opening is the lowest in over a year for the studio. Though Disney has struggled recently with movies that don’t feature a Spandexed superhero, the studio can at least afford to take a hit. Aside from the disappointment of “Solo: A Star Wars Story” this summer, the studio has fielded some of the biggest releases this year including “Black Panther,” “Avengers: Infinity War,” and “Incredibles 2.”

The family-friendly “Nutcracker” amassed $38.5 internationally, bringing its worldwide total to $58 million. Keira Knightley, Misty Copeland, and Mackenzie Foy star in the film, which was panned by critics, who gave it a 34% on Rotten Tomatoes.

Disney is hoping the classic Christmas tale is able to pick up steam as it heads into the holidays.

“Obviously, it’s not the start we were looking for, but it’s a great family friendly option,” said Cathleen Taff, Disney’s president of domestic distribution. “Sometimes it doesn’t connect as broadly as we want it to.”

In third, Paramount’s “Nobody’s Fool,” the first R-rated comedy from Tyler Perry, generated $13.7 million from 2,468 screens. That’s one of the lowest bows for a Perry movie.

It’s the first solo starring vehicle for breakout Tiffany Haddish, who continues to solidify her box office chops. The boisterous funnywoman also starred in this year’s “Night School” with Kevin Hart, along with Ike Barinholtz’s “The Oath.”

Rounding out the top five are holdovers “A Star Is Born” and “Halloween.” Bradley Cooper and Lady Gaga’s “A Star Is Born” pocketed another $11.1 million in its fifth outing, marking an impressive drop of just 21%. That brings its domestic tally to a huge $165 million. Universal and Blumhouse’s R-rated slasher “Halloween” earned $11 million for a North American total of $150 million.

At the specialty box office, Focus Features’ “Boy Erased” opened in five theaters in New York, Los Angeles, and San Francisco with the best screen average of the weekend. It generated $220,000 for an average of $44,000 per location. Lucas Hedges and Nicole Kidman star in the gay conversion drama, which will expand into 75 theaters next weekend.

“It’s a very emotional time in America, and audiences seem to be seeing and hearing the urgency in this story. It’s a film we always hoped would bring families together and get people talking, and that seems to be happening,” said Focus’ president of distribution Lisa Bunnell. 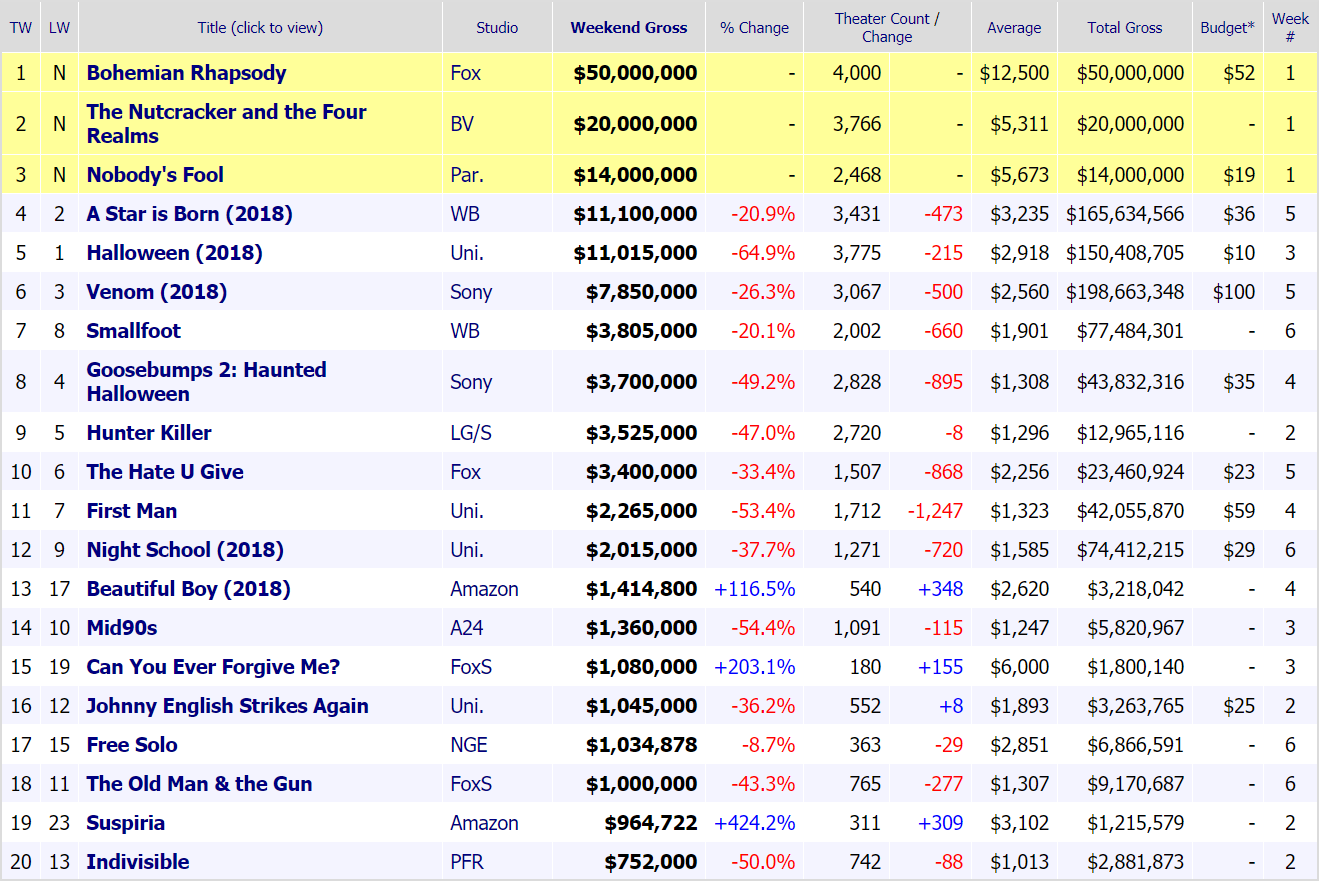 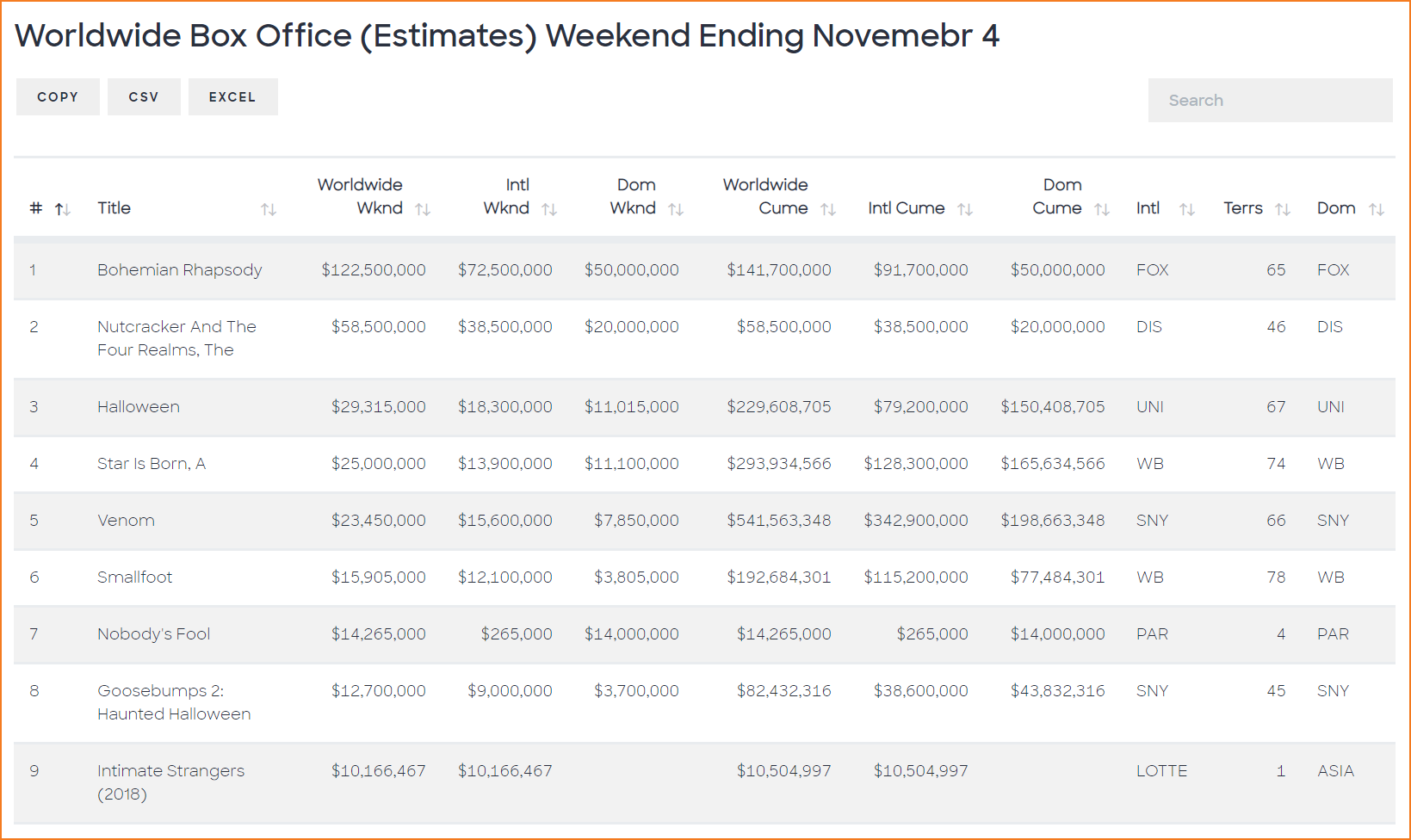 Huh, I thought the critics would enjoy the movie, guess I was wrong. 60 is a pretty low average.
B

Insane Metal said:
Huh, I thought the critics would enjoy the movie, guess I was wrong. 60 is a pretty low average.
Click to expand...

I haven't seen it yet but I read that it's not a totally accurate portrayal of Freddy and doesn't really talk about his personal upbringing too much. Think that's why Sacha barren Coen dropped out.

Heard its still entertaining tho and I'm watching it either way this week. Hopefully the success leads to a more true to real life movie with Cohen starring.
You must log in or register to reply here.