94% War for the Planet of the Apes

54% Valerian and the City of a Thousand Planets

”Dunkirk" and ”Girls Trip" are opening above expectations at the domestic box office, while ”Valerian and the City of a Thousand Planets" looks like a huge flop.

But let's start with the good. Christopher Nolan's World War II film from Warner Bros. is flying past earlier projections to a $50.5 million opening weekend from 3,720 locations. $11.7 million of that total came from Imax screens alone &#8212; that's 23% of the total market share from 402 locations. That $50.5 million number is a good one considering it is expected to have a large multiple, and continue to play well through August. The movie's production budget was reportedly just under $100 million, although earlier reports speculated that it was much higher.


”We're absolutely thrilled with this incredible result on this brilliant film," said Warner Bros. distribution chief Jeff Goldstein. ”In a summer that has had a lot of disappointments, this movie way over-achieved."

Critics have fallen in love with Nolan's depiction of the real-life Battle of Dunkirk. Their reviews have earned the movie a 92%, and chatter has already started about its award season potential. But audiences have responded as well, perhaps surprisingly, to what many have described as an atypical war movie. It holds an impressive A- CinemaScore.

”Dunkirk" includes a cast with awards season pedigree in Kenneth Branagh, Mark Rylance, and Tom Hardy. But the ensemble is mostly made up of a band of newcomers including Fionn Whitehead, Tom Glynn-Carney, Jack Lowden, and, as you probably know by now, Harry Styles.

”We looked at this as a big summer event film. We wanted to give it the patina of a tentpole release," Goldstein said of the studio's decision to date the film for the end of July. ”We know from past history when you open up at this point in the summertime, you can run for weeks and weeks," he added, referencing last year's ”Suicide Squad."

Nolan ruffled some feathers for his bullish comments about the vitality of the theatrical experience. But, perhaps, his prizing of that is part of what ended up encouraging audiences to buy tickets as opposed to waiting for the movie to hit a streaming service. The movie is getting the widest 70MM release in more than two decades, and much of it was shot with Imax's extremely high-resolution 2D film cameras.

Even during a crowded weekend, Universal's ”Girls Trip" is breaking the curse of underperforming R-rated comedies this summer as it looks to post $30.4 million from 2,591 locations. That's the largest opening of any live-action comedy so far this year.

”Girls Trip" follows a foursome &#8212; Regina Hall, Queen Latifah, Tiffany Haddish, and Jada Pinkett Smith &#8212; who go out for a long overdue women's weekend to New Orleans for the Essence Music Festival. Director Malcolm D. Lee is also known for his first feature, ”The Best Man," and its follow-up, ”The Best Man Holiday."

Meanwhile ”Valerian," Luc Besson's big-budget adaptation of the French comic series from his own EuropaCorp, and distributed in the U.S. by STXfilms, looks like a real clunker. The sci-fi epic should land in fifth this weekend with about $17 million from 3,553 locations.

There is some risk mitigation at play here for what is believed to be the most expensive independent movie of all time &#8212; the bulk of the production budget was covered with foreign pre-sales, equity financing, and tax subsidies. STX took on marketing and distribution for the film after EuropaCorp's partner, Relativity, went under. Europa financed the P&A. But, regardless, someone will pay for the movie's poor returns so far, and sights are set overseas to see if the international box office has a more positive response.

It's a tough break for Besson, who has treated the movie like a passion project. Dane DeHaan and Cara Delevingne form the central pairing in the sci-fi epic about a team of space-and-time-traveling agents. Clive Owen, Rihanna, and Ethan Hawke round out the cast.

In its second week, ”War for the Planet of the Apes" should earn $20.4 million this weekend, landing it in third after a 64% drop. ”Spider-Man: Homecoming" looks to land in fourth with $22 million domestically, a 50% decline from its second to third weekends in theaters.

To end on a positive note, ”Wonder Woman" is officially the highest-grossed movie of the summer, as of this weekend, with over $389 million. That puts Patty Jenkins and Gal Gadot's acclaimed film ahead of ”Guardians of the Galaxy Vol. 2." There was speculation that Warner Bros. would announce more details about a ”Wonder Woman" sequel during Saturday's Comic-Con panel, but the studio deferred. Still, the stat is exciting news for those who have hope for more female-led projects in the future.

”Dunkirk" and ”Wonder Woman" this week pushed Warner Bros. past the $1 billion mark at the domestic box office for 2017 &#8212; the seventeenth consecutive year that the studio has done so.
Click to expand... 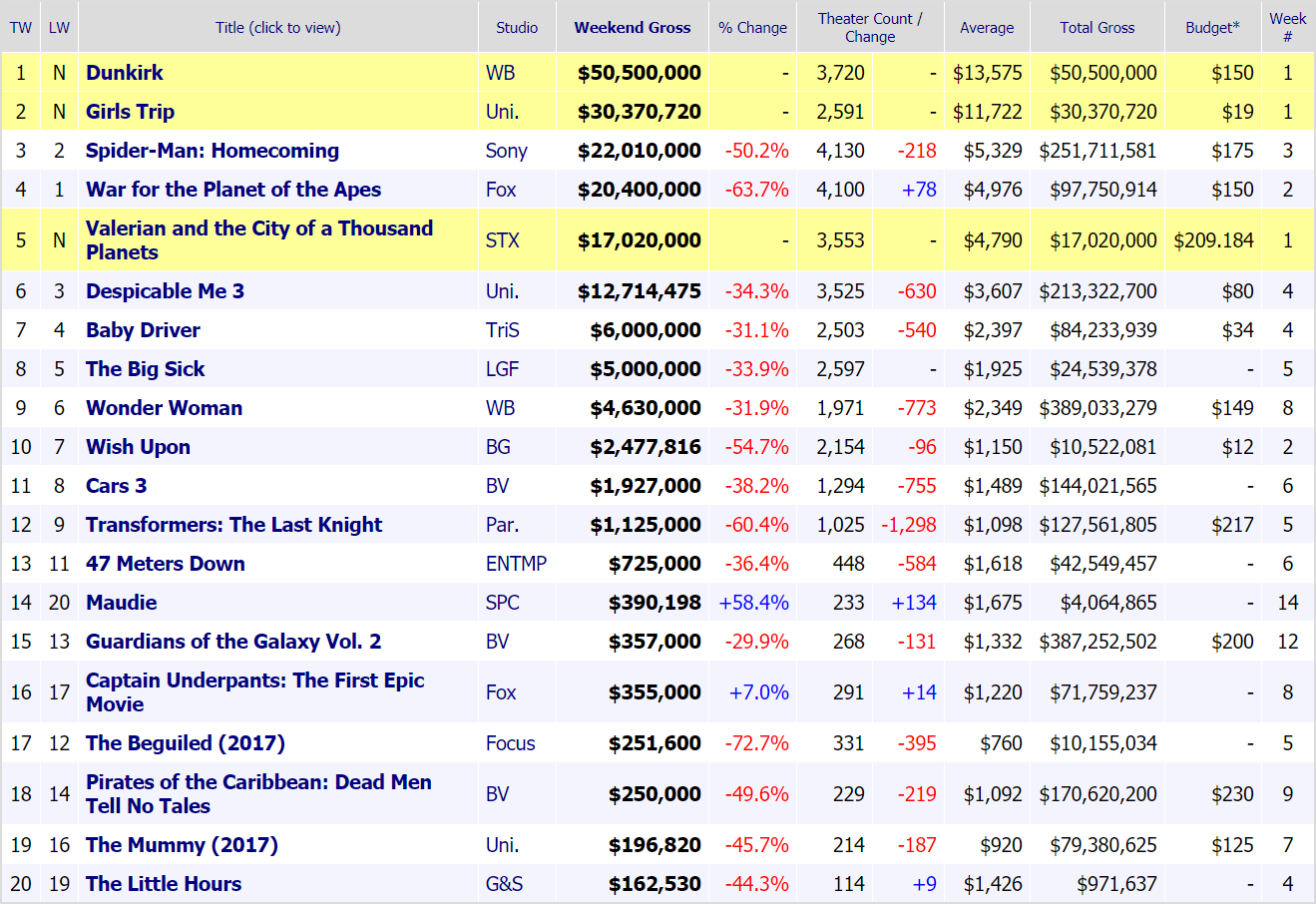 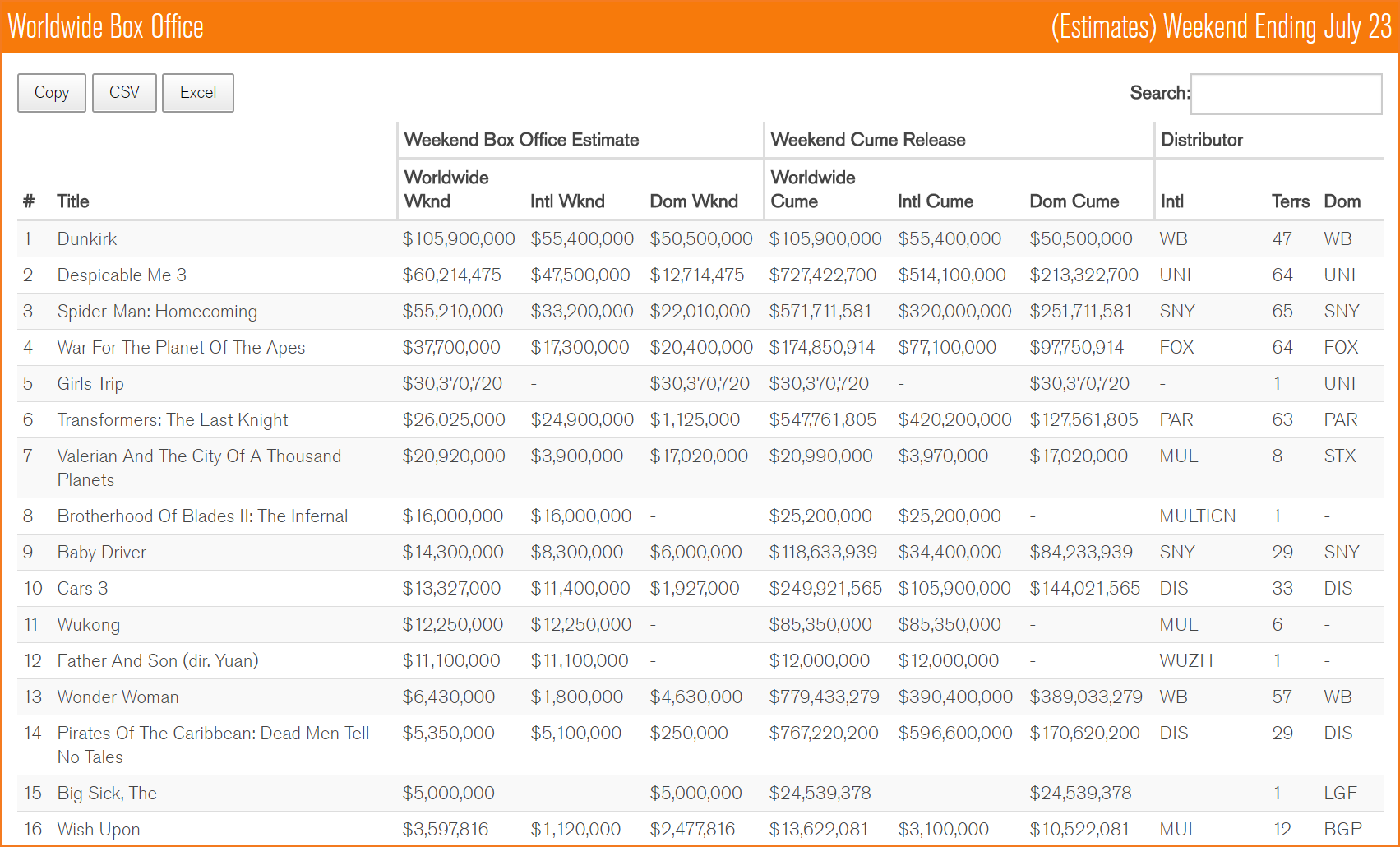 Also, that Apes drop is even worse than Spidey's 2nd weekend drop. 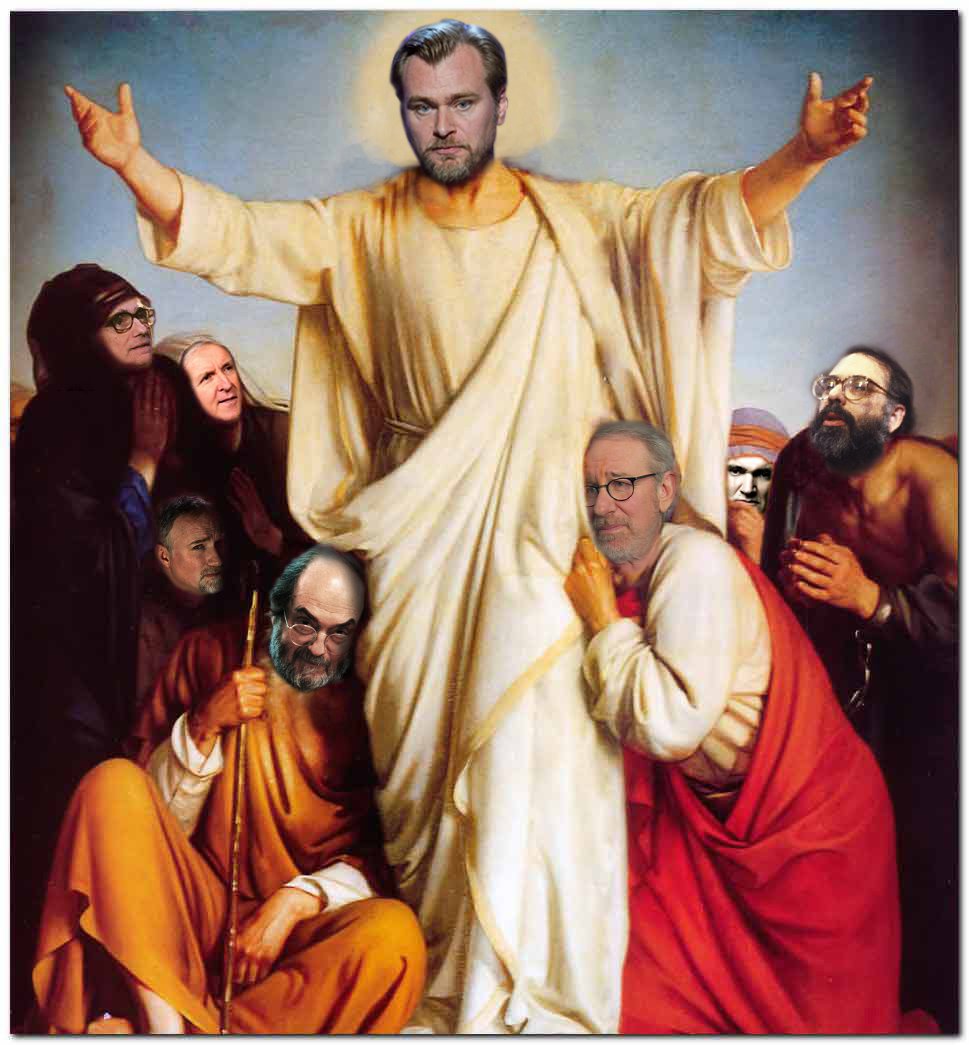 In really glad Girls Trip did well. It was such a funny movie and it didn't really feel like a rehash of other T-Rex comedies to me.
D

When will Nolan deliver his first bomb?

DarkLordMalik said:
When will Nolan deliver his first bomb?

...Are Apes and Valerian's scores switched?

I see what you did with the RT scores.
V

That WW continues to be a success story! I still need to see PotA but I'm sad at the drop as I'm sure it'll be as good as the first two.
R

Valerian's budget is almost $40 million more than what was reported when it was first being touted as the biggest bomb of the year. Oof
J

that budget for valerian is oddly specific.

Yeah I was very surprised for a second.
G

at the Valerian budget

City of a Thousand Bombs
D

If Dunkirk makes $500M worldwide, it would be Nolan's 5th straight film to do so.
D

Nope. It had a pretty decent weekend multiplier +3x so it didn't fizzle out of the gate. The movie also made more than Gravity in the International market with a Worldwide gross of just under 700 million.
M

So what is the actual production budget for Dunkirk? Or is it one of those things we will never know?
S

It's pretty astounding something like Valerian was even able to get that kind of budget.
B

Look at the holds in the bottom 5.

I guess my lowball Spidey prediction is gonna be lowball. Ah well.
G

If Dunkirk makes $500M worldwide, it would be Nolan's 5th straight film to do so.
Click to expand...

According to my insiders, Nolan had a massive $20 million against 20% of the gross, which netted him around $90 million.
Click to expand...

Lol that 54% War of the Planet of the Apes had me so confused for a moment.
N

Sulik2 said:
So what is the actual production budget for Dunkirk? Or is it one of those things we will never know?
Click to expand...

Dunkirk's budget can be found in Nolan's 2017 tax returns
3

Fight the good fight.
B

How does Valerian get that budget though?
M

Bobby Roberts said:
Look at the holds in the bottom 5.

I guess my lowball Spidey prediction is gonna be lowball. Ah well.
Click to expand...

I keed. I know that's as much money as Sony is gonna see in awhile.
H

Here's how the US Top 10 Summer movies should end up. This covers movies released from May through August.

You didn't see the trailers? It's filled to the brim with expensive CGI. Visuals are amazing.
G

That War for the Planet of the Apes and Valerian and the City of a Thousand Planets Rotten Tomatoes/Metacritic discrepancy -- wow.

I wonder how will Dunkirk do internationally, outside of France and the UK.

Oh and Luc Besson is a crazy person. But not as crazy as the ones that decided to invest in this thing.
M

I'm happy to see Dunkirk and Girls Trip do well tho I wished War for the Planet of the Apes held better.
G

Spider-Man should be able to clear $650 million without China. I am curious to see how it fares there.
B

kruis said:
You didn't see the trailers? It's filled to the brim with expensive CGI. Visuals are amazing.
Click to expand...

No I get THAT. But who green lights this?
J

Girl's Trip needed ScarJo and her star power.
You must log in or register to reply here.