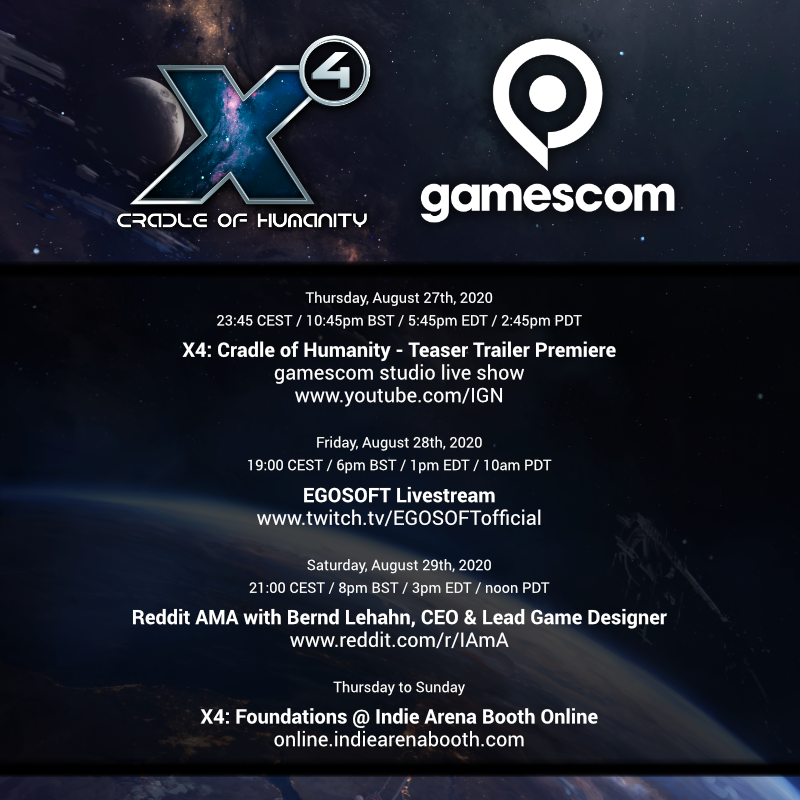 EGOSOFT unveils the next chapter in its long-standing space simulation franchise. X4: Cradle of Humanity is the second expansion for the latest game in the series, X4: Foundations, which was released for PC in November 2018.

Later this year, X4: Cradle of Humanity will bring the X series back to Earth, significantly increasing the size of the game's universe with new sectors, and welcoming two Terran factions to X4: Foundations, along with their economy, ships, weapons and stations. New game-starts will introduce the identity and political stance of the Terran factions, as well as giving an alternative perspective on existing story developments in X4: Foundations.

X4: Cradle of Humanity will also shed light on what has happened to Earth in the decades since the jump-gate shutdown. Furthermore, a certain pirate faction that is well known to fans of the series will be making a dramatic comeback!

X4: Cradle of Humanity will be accompanied by the biggest free update to X4: Foundations yet. Update 4.0 will be made available to all owners of the base game and is set to further enhance X4: Foundations in a number of ways, including major new gameplay features (e.g. a new terraforming feature) and wide-ranging visual improvements (e.g. volumetric fog). Details of these, and on other new elements of the 4.0 update, will be disclosed at a later stage.

Join us for a livestream on Friday, August 28th, 2020 at 7pm CEST / 6pm BST / 1pm EDT / 10am PDT at www.twitch.tv/egosoftofficial to find out more about our plans for the future of X4: Foundations and X4: Cradle of Humanity.

X4: Cradle of Humanity is now listed on Steam and can be added to players' wish-lists. Alternatively, by purchasing the X4: Foundations Collector's Edition bundle, space adventurers can secure access to the expansion when it is released as well as benefitting from a discount over buying it separately.
Reactions: chilichote and Africa's Toto

That's the only one I managed to "complete". Certainly sucked hundreds of hours from me back in the day. Great atmosphere!
Reactions: chilichote

I keep wanting to get X4, but all the reviews keep saying that it's not that good. Is it really that mediocre compared to X3?
You must log in or register to reply here.