Amazon France has revealed a new bundle for the Xbox 360 system. The &#8220;10th Xbox Anniversary&#8221; bundle includes the 250 GB system, 3-Month Xbox Live Gold Membership Card, two wireless controllers, a disc copy of Halo: Combat Evolved Anniversary in addition to digital copies for Fable III, Gears of War 2 and Halo: Reach. You can check out the package for the &#8220;10th Xbox Anniversary&#8221; system bundle, in addition to a few images of the contents that will be in it (as well as some screenshots of the aforementioned games), in the slideshow to the left of this article. 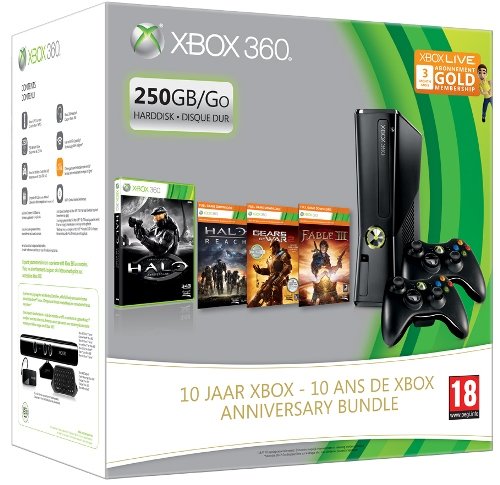 That'd be weird for that to come out in America, since the Xbox release in 2001 here.
P

Edit: Unless they go by the European release date for the OG Xbox
U

Combichristoffersen said:
10th anniversary of what? The OG Xbox and Halo: CE were both released in 2001, and the 360 is obviously not 10 years old. So.. i dun geddit

Edit: Unless they go by the European release date for the OG Xbox
Click to expand...

I was just trying to work that out myself.
K

Take out Fable and replace with Forza 3/4 and that would be a killer bundle.
S

European and Japanese Xbox launch
B

in addition to digital copies for Fable III, Gears of War 2 and Halo: Reach.
Click to expand...

10 years from the release of the original Xbox in PAL territories, for those who don't know. JP as well it seems.
K

Did they give up on Kinect? =p
G

SmokyDave said:
Take out Fable and replace with Forza 3/4 and that would be a killer bundle.
Click to expand...

Even MS got tired of bundling Forza 3 with Xbox HW lol.
D

Combichristoffersen said:
Edit: Unless they go by the European release date for the OG Xbox
Click to expand...

It's a European bundle.
L

That's an excellent bundle considering it's 280. I payed around that for 250GB Slim with 3 months of Gold, Crysis 2 and Forza 3 and that was with only 1 controller.
L

And was succeeded in europe in December 2005! Heck even japan got the Xbox before Europe. Is this bundle MS trolling europe? Let's celebrate one heck of a short-lived console!
R

Awesome bundle for anyone looking to see what the Xbox is all about. Both Halo games are great picks, Fable 2 might have been better but oh well, and it would have been nice to see Gears 3 but that is too new I guess.
S

Should be Fable 2 and Gears 3.

Are the game preinstalled or just download codes? Imagine the delight of uninformed buyers when they get home to play some games and have to wait 8 hours to get them all downloaded.

This is a very nice bundle.
H

Gears of War 2? Huh, odd. Guess Microsoft EU don't find the Gears story as important to the experience as Epic do.
D

Some Weaklin said:
Should be Fable 2 and Gears 3.
Click to expand...

Fable 2 is a broken game.
T

Wow, when this gets the inevitable discount in the future, there will be some happy first time buyers. Would be an amazing deal for $300

Edit: NVM, Halo 4 will have totally killed Reach's population by then
M

Lindsay said:
And was succeeded in europe in December 2005! Heck even japan got the Xbox before Europe. Is this bundle MS trolling europe? Let's celebrate one heck of a short-lived console!
Click to expand...

Pretty sure they're celebrating 10 years of the Xbox brand in Europe, nothing to do with the specific console.
S

They're probably thinking "once they finish Gears 2, they'll go straight to the shop and buy 3".
B

who has time to play all that shit at once?
S

That's a good bundle but doesn't it seem kinda late in the generation to be pushing a bundle like this? Most expensive model 360, extra controller, online subscription, four games. It seems more aimed at the "hardcore" crowd that would've bought a 360 years ago.

I would think they'd wanna start pushing the low-priced Arcade 360 along with a casual game or something.
H

Dragon said:
Fable 2 is a broken game.
Click to expand...

But a hell of a lot better than 3
C

Will I get an extra controller and 2 games of my choosing a month later?
I

Xbox?
You must log in or register to reply here.

rofif replied
Dec 13, 2021
Halo Infinite and Trolli candy team up to give out rewards, and chance to win a custom controller, Series S, PC, and other prizes.