That is absolutely disgusting beard.
Reactions: Brigandier, PharaoTutAnchAmun and SoloKingRobert

I wish Microsoft would hurry up with that long overdue slice of "Humble pie" I've been dying to eat.

I'm very excited that THEY are excited.
Reactions: phil_t98

Was Persona 5 already announced for Xbox ?

It better not be Crackdown 4.

I’m definitely in the camp that says if there are unannounced games that are 100% going to be released in 2021 (not target dated), then they are all indies, remasters, or ports.

That goes for Microsoft and Sony really.

Any unannounced AAA game with a 2021 target date is an automatic candidate for delay into early 2022 in my book.

Nintendo might surprise me but that’s about it.
S

StreetsofBeige said:
It better not be Crackdown 4.
Click to expand...

why not?
Reactions: PharaoTutAnchAmun and SoloKingRobert

Xbox games are always completely devoid of charm, wit or character, they are the Excel Spreadsheet of videogames, perfectly functional but just not much to it. 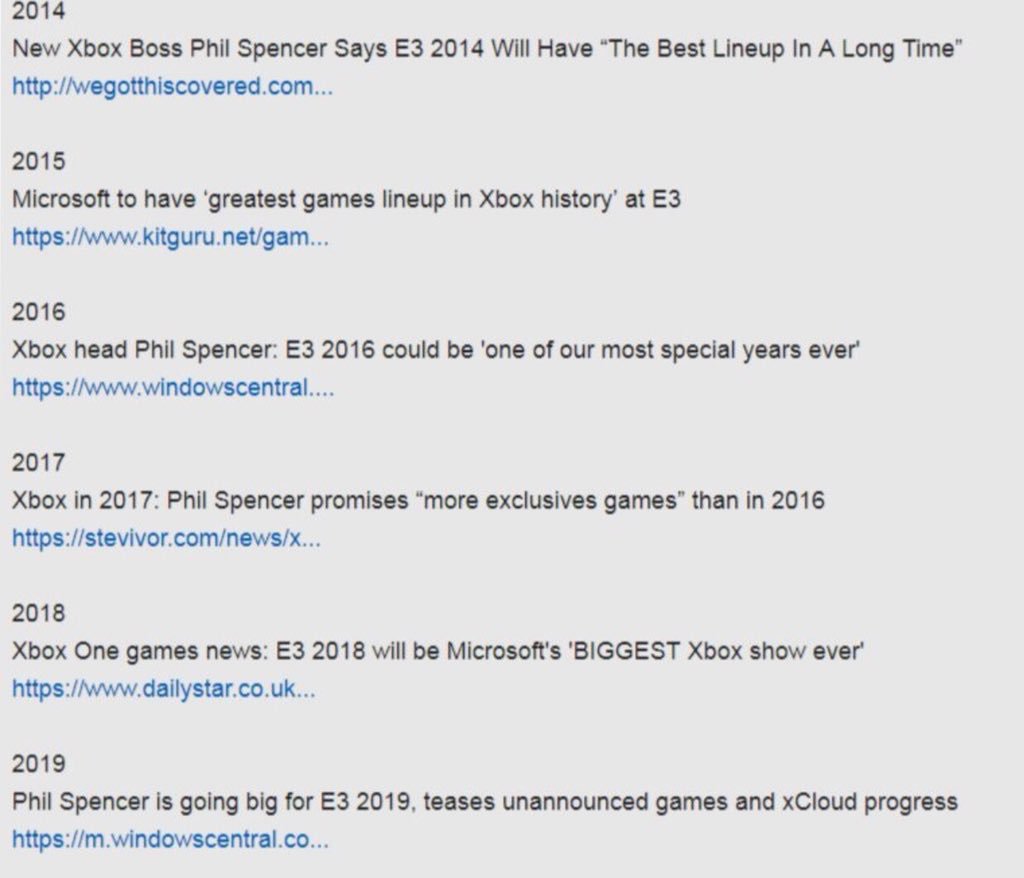 Death Stranding: To the Moon Edition

gooner4life_uk said:
Xbox games are always completely devoid of charm, wit or character, they are the Excel Spreadsheet of videogames, perfectly functional but just not much to it.
Click to expand...

This is the 1 that Xbox needs to announce.
Reactions: MicrosoftMediaPro and Deputy Moonman

Well, I assume that for E3 they'll show Halo, Ghostwire: Tokyo, some console exclusive indies for Game Pass, some multis with marketing deal like Elder Ring and maybe an update on a few late 2022 games.

I'd like to see a new Killer Instinct but I'm not sure if they have someone to work on it.
Last edited: Mar 9, 2021

Wednesday when they anniunce the SEGA purchase..

I like my Series X. Really love gamepass on my pc.

But man they gotta show some shxt. Some gameplay, some gameplay we'll be playing soon, some real good content. They got so much good talent but..they seem to be afraid of letting their hands go and throwing a punch for once.

I'm no expert on the matter but when I think of Playstation 2 from my perspective as a fan of the system I always felt like Sony just let/encouraged people go to town making games for the thing. I could be wrong, but thats how I felt

Microsoft could learn a lot from that because they need to give gamers the same impression, and aside from a Bethesda purchase we still don't know much about they seem a little too chill.

Land of the OKC Thunder

"Best Line-Up In A Long Time" - In 2014 he was right. The Master Chief Collection was a huge announcement and probably my all-time favorite of any E3 ever. Then there was Sunset Overdrive, Forza Horizon 2, Fantasia, Ori and the Blind Forest, Crackdown 3, Dance Dance Central Spotlight for Kinect, and a remake of Phantom Dust. Project Spark, Fable Legends and Scalebound were also announced. Even though they didn't pan out I'd say that's one heck of an E3 line-up.

"Greatest Games Line-Up in Xbox History" - In 2015 they announced Rare Replay, Sea of Thieves, Ashen, Forza 6, Gears of War 4, Recore, and finally a first look at Halo 5. While on paper the line-up is solid, it's probably not the greatest line-up ever in xbox history.

"Could Be Most Special Year Ever" - In 2016, the announcement of the Xbox One S and Project Scorpio were big announcements and one could argue they did make that year's E3 special. This because the OG Xbox One hardware was a flop and this is the E3 where MS was turning things around from a hardware PR standpoint. Games: Cuphead, Below, Dead Rising 4, Forza Horizon 3, Gears of War 4, Scalebound?

"More Exclusive Games Than In 2016" - In 2017 I'm not sure what he was referring to unless he was including ID@XBOX games, for which they announced a bunch. But they also talked about Forza 7, Ori and the Will of the Wisps, State of Decay 2, Sea of Thieves, Crackdown 3 and Super Lucky's Tale.

"Biggest Xbox Show Ever" - In 2018 MS showed a lot of games. Most were not exclusives but it was a pretty big show. They also announced the acquisition of 5 new studios that would be making exclusives for the xbox console. Halo Infinite was teased. Forza Horizon 4 was shown. Gears 5 and Gears Tactics were announced. Tunic, which is my most anticipated game for 2021 after Halo Infinite, was also announced. Nier Automata officially coming to xbox. Phil revealed that Playground Games is making an unannounced game - which turned out to be Fable being restarted from scratch. But if you look at the number of games mentioned or shown I don't think you can fault Phil's words: Battlefield V, Crackdown 3, Cyberpunk 2077, Devil May Cry 5, The Division 2, Dying Light 2, Fallout 76, Jump Force. Just Cause 4, Kingdom Hearts III, Metro Exodus, Ori and the Will of the Wisps, Session, Shadow of the Tomb Raider, Sekiro: Shadows Die Twice, Tales of Vesperia: Definitive Edition, The Awesome Adventures of Captain Spirit, We Happy Few, and some more ID@XBOX games. So can it be argued that it was Microsoft's biggest xbox show ever? I think so. I also don't fault press conferences where they show games. I want to see exclusives, yes, but I want to see everything that is coming out.

It's Phil's job to hype up the xbox brand. He uses hyperbole and a lot of colorful adjectives, but I'd say the only year that he was completely off base was 2015 (and maybe 2017?). Phil makes himself available for interviews and he's going to have a lot of quotes where he is saying positive things. The media outlets are also going to add their own spin to each article as well. I think it's obvious that MS is turning things around in the games department. If someone says they're excited for some unannounced games in 2021 then I think it's safe to assume there will be some unannounced games revealed this year.
Reactions: Brigandier
F

I, too, am excited by unannounced games.

Seriously? They say that EVERY SINGLE YEAR around this time

Create a thread when they release something interesting, not when xbox santa promises that he wasn't naughty .
S

Concern said:
Not a Forza fan but hopefully Starfield is one of those unannounced 2021 games.
Click to expand...

I'm the opposite. I'm waiting to see what Starfield is all about before getting hyped.

But I need a Forza like yesterday. Especially of the motorsports variety. Turn 10 is currently in their "woke" phase, and I've already had 2 bans. The next one gonna end me.

As opposed to Xbox Exec saying "meh" for some unannounced 2021 games ?

And sony executives haven't said anything, that means Sony has no confidence in their lineup at all.

Shelookdlvl18 said:
I'm the opposite. I'm waiting to see what Starfield is all about before getting hyped.

But I need a Forza like yesterday. Especially of the motorsports variety. Turn 10 is currently in their "woke" phase, and I've already had 2 bans. The next one gonna end me.
Click to expand...

Shubh_C63 said:
As opposed to Xbox Exec saying "meh" for some unannounced 2021 games ?

And sony executives haven't said anything, that means Sony has no confidence in their lineup at all.

Reactions: thismeinteil and PharaoTutAnchAmun
You must log in or register to reply here.