Only finished 5% Game I Played . Not sure , maybe lower .

I don't like playing a female protagonist. When given the choice, I always pick dudes.

Only one, WoW set back my professional development by a decade

I cheated on Bejeweled PC using a slow down mod, then took my save file over my friends house and deposited it into their high score folder when they weren't looking so I could brag about beating their high score.

Mister Wolf said:
I cheated on Bejeweled PC using a slow down mod, then took my save file over my friends house and deposited it into their high score folder when they weren't looking so I could brag about beating their high score.
Click to expand...

I bought a Game.com when it first released. I got a couple of games for it but ended up bored with it and sold it. Around six months later they announced a bunch of new games coming to it, including WCW Whiplash, NBA Hangtime, Madden Football, Turok: Dinosaur Hunter, Castlevania: Symphony of the Night, Metal Gear Solid, etc. and I thought maybe they had someone new in charge at Tiger that knew what gamers really wanted to play, and so I bought another one. Not a single one of those games actually released.

I don't know if this is embarrassing, but I really liked the Virtual Boy. It has been a long time since I've played it, but I was especially a big fan of Wario Land. I used to bring the VB to school, other kids would beg to play it during lunch, so I'd let them. I even let my bus driver play it, he'd play it when we were stopped at red lights and I'd tell him when the light turned green.

I leveled a sword and board warrior through WoW classic and Burning crusade and didn't realize "Shield Block" was an actual useable ability... i thought it just passively meant I had X% chance to block attacks.

I cheated my playthrough in Pathologic 2 with console commands.
I loved the game though so it didnt take away from my experience, but perhaps it did, i didnt allow myself to be crushed.
L

Mobile Suit Gooch said:
My first JRPG was Final Fantasy X-2. I used to beat off to Yuna, Rikku, and Paine in lez situations.
Click to expand...

Jerkin it to your video game bae isn't embarrassing it's a goddamn right of passage. Stand tall.

Despite putting thousands of hours into Resident Evil 4 I never unlocked the hand cannon.
Last edited: May 29, 2021

My dick has.
A

I really enjoy playing Minecraft and I’m an old person.

Also when I was a kid I spent my birthday money on xmen for nes and it was one of the worst games I had ever played.
I was determined to beat it and get my money’s worth out of it and I did.

I always when I play tekken I put any girl in face down with the butt in the air.

Bioshock got me fired. I called in sick for 2 days to play it. Played through the first 2 nights so there was no going to work in that shape on the 3rd day. I did not call the 3rd day. 4th day I go back to work and flabbergasted they fired me.. Some people, amirite?

Yerd said:
Bioshock got me fired. I called in sick for 2 days to play it. Played through the first 2 nights so there was no going to work in that shape on the 3rd day. I did not call the 3rd day. 4th day I go back to work and flabbergasted they fired me.. Some people, amirite?
Click to expand...

For Bioshock it was not worth it, and less if it is Bioshock 1.
Only woth it if was Gravity Rush, there it is more than justified.
Last edited: May 29, 2021
O

When I was a kid, my favorite publisher of C64 software on the playground was Eaglesoft Incorporated.
How times have changed.

Getting beat by my 8 year niece (at the time) in Super Smash Bros. Ya, she's practiced, but she's still not great at gaming. I can pick up a game for the first time and beat her in stuff since I have experience with general gaming for decades. I destroyed her in Dragon Ball Fighterz playing for the first time.

But when I played her (I've never played Smash ever), I was getting torn to shreds and blasted out of the level KO style every minute. No idea what the fuck I was doing and my past experience playing SF and Tekken kinds of fighting game controls were useless in that game.
Last edited: May 29, 2021

I cant beat dark souls games. I've purchased 1, 2, 3, sekiro and bloodborne and they just sit on my shelf, mocking me with their smug aura.

Demons souls tho, my two time GOTY hands down

I went from loving them to getting tired of the formula in a blink.

-I love the ending of mass effect 3 and I have the highest respect for BioWare, being able to produce such a great game despite the short development time given them by EA

- I have an unnatural hate for everyone using the term roguelike for action games like Isaac, enter the gungeon or similar

- I find most of jrpgs vomit inducing

- fallout 3 is an amazing game, better than the first 2 and New Vegas

I purchased a Sega CD. I played Night Trap.

I bought Demon's Souls on PS5 thinking it wouldn't be that hard. Completed the first level and started the second (Stonefang Tunnel). Got my ass kicked by those fat blokes shooting fire and now I don't want to start it again. I feel like a filthy casual that needs to git gud.

I spent money on star citizen.

I think the Halo series has more cheap deaths than any Souls game.

1. Joining neogaf. (thinking people here enjoyed video games)
2. Reading some of the comments here, you guys need help.
3. I went through zone of the enders without realising there was a block button till a certain point where its impossible to progress without blocking a certain attack. :')

This is gonna be oddly specific and most people won't understand, but I have played Dota 2 since 2012 (with a 2018-2021 break), I have over 3500 hours in it. My highest MMR was a little over 3000. Since I came back, I dropped to 1500 already and I really don't believe I play that bad, it pisses me off. Playing alone sucks, enemy team almost always seems to be better coordinated. So yeah, it's embarassing for me to have such low MMR and I believe I will drop below 1000 by the end of the year, sadly.

I really enjoyed Bujingai The Forsaken City on PS2.

Did not like No More Heroes. Played till the second boss (?), guy in a baseball stadium, then quit. Game was telling jokes, I wasn't laughing.

You guys must have looked for a naked Lara Croft cheat back in the days.

Me and some friends fell for the damn EGM Sheng Long trick in 1992. I'll go to the grave thinking there's an actual Sheng Long sprite embedded somewhere in the code. 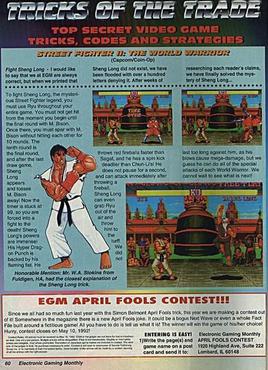 anthony2690 said:
1. Joining neogaf. (thinking people here enjoyed video games)
2. Reading some of the comments here, you guys need help.
3. I went through zone of the enders without realising there was a block button till a certain point where its impossible to progress without blocking a certain attack. :')
Click to expand...

Hey if it's more fun to complain about games than play them then maybe the industry can stop making garbage shit games.

I can understand that, the player is not meant to kill all of the zombies they encounter. I always struggle with that myself, because I like cleaning out locations of all enemies in video games.

What's funny is that it's not such a big problem in some of the later RE games, at least not on normal difficulty. I've done that in RE2 and 3 remakes to be able to search the rooms without being bothered by the monsters.

I went out of my way to buy an Atari jaguar.

I worked on a horrible kart racing game called " Pulse Racer " where if you went too fast your driver would have a heart attack.

a fucking racing game where you get penalized for going too fast. ugh...

Even though I love NieR Automata, I didnt bother to do all of the achievements...
I unlocked them in game in the "secret"/new shop.
Additionaly I didnt deleted my Savefile to help the other gamers...

don't think there's anything im embarrassed about. i just buy consoles that have games i want to play. i don't feel the need to buy certain games just because a lot of people like them. even if people shit on a game it's not gonna stop me buying it if i want it. i don't 100% every game, get all achievements, etc. i'm not ashamed to admit i sometimes use easy mode or follow a guide. i'm here to have fun and i'll do that whatever it means without caring what others think.
You must log in or register to reply here.

FeralEcho replied
Oct 31, 2022
How to NOT share your Steam Games
Social Drama Cringe

Brofist replied
Jun 28, 2022
GAF, what are your favorite PC multiplayer games? (recommend me something!)