The headline news from games retail in 2016 is much the same as the year before &#8211; less money was made from video games software and hardware sales, but peripherals and accessories remain an area of growth.

According to GfK Entertainment, £1.78bn was made from boxed games, hardware sales (not TV consoles such as NES Classic), and peripherals and accessories &#8211; a dip of 15.8 per cent year-on-year.

Meanwhile, hardware revenue dropped by 27.1 per cent to £502.9m. While this sounds like rather bleak news, this is in part driven by price drops of PlayStation 4 and Xbox One consoles during the year. This was especially true in the second half of 2016, when both Sony and Microsoft released new, slimmer SKUs of their consoles, alongside price cuts of the original models.

PS4 was once again the dominant platform, claiming 48.2 per cent of software revenue and 45 per cent of units sold.

It's brighter news on the accessories and peripherals side of things. Revenue from this sector &#8211; which includes digital cards, toys-to-life figures and accessories, including PlayStation VR &#8211; rose by 1.1 per cent for the year to £500.8m.

EA was once again the highest-performing publisher of the year with a 22.1 per cent share of software sales and a 26.1 per cent slice of revenue. This is a slight increase on both fronts from 2015, likely due to strong sales of Battlefield 1 and, of course, FIFA 17.

Ubisoft came in at No.3. Looking at the Top 50, this appears to have been driven by strong sales of The Division, as well as Watch Dogs 2 which charted at No.8.

There's some good news in the 3DS sales data &#8211; the handheld saw a 2.3 per cent rise in unit market share, while revenue share rose to 6.0 per cent. This is particularly impressive for a console in the final days of its cycle. This positive shift will no doubt have been driven by the massive popularity of smartphone title Pokémon Go, and the subsequent launch of Pokémon Sun and Moon in November. This helped Nintendo's software market share increase, too.
Click to expand...

Games outside of the Top 50: 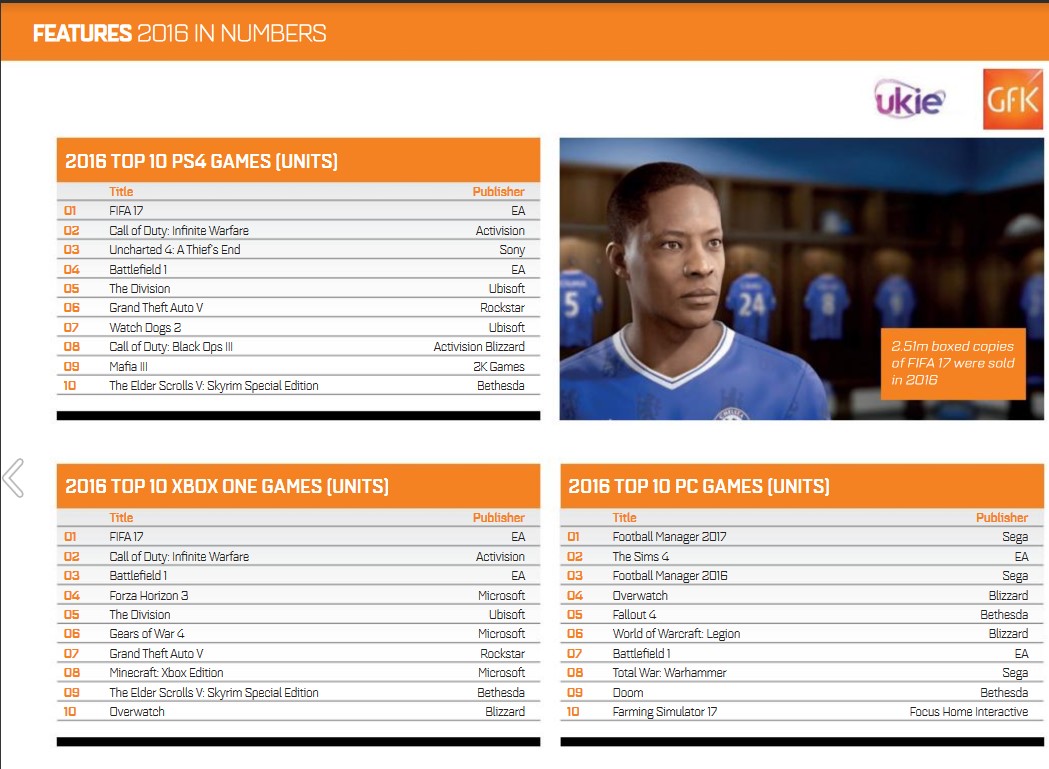 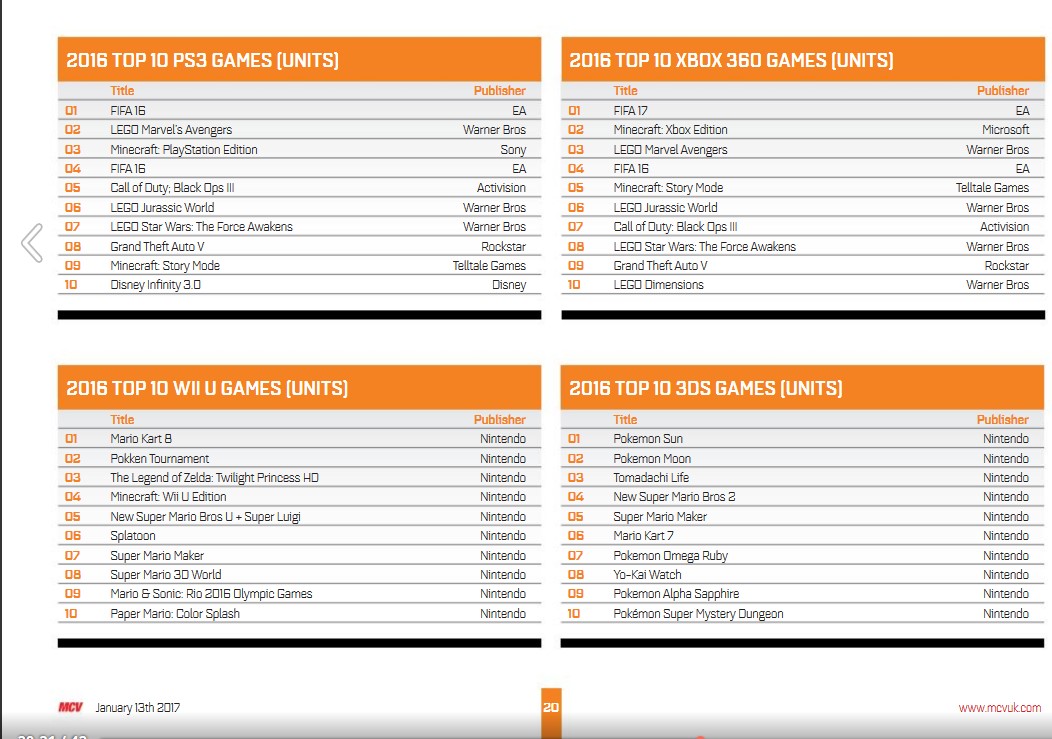 Fascinating how in the UK Xbox somehow remained relevant, while in the rest of Europe they lost almost all they might have gained last gen.
J

Well i guess EA is happy.
And Forza Horizon is beast. Single console. 3 months on sale and top 10.
S

Ratchet did better than Dark Souls? That's strange no?
B

Less than 600, 000 Wii U software sales in the whole year? Not surprising since Nintendo did their usual strategy of letting their consoles die.
S

One of those things in the top accessories and peripherals is not like the others
the 3DS AC adapter
But that sector including toys to life sure was propped up with PS VR and digital content (which are not included in the chart) because toys to life certainly isn't doing it anymore with how the new Skylanders game lost out to Disney Infinity firesales.

Also seeing PS Vita fighting off the Nintendo Wii.
A

Dead rising at 62.... The last guardian at 68.....
I'm impressed with wd2 being 8th overall given its limited time and much smaller launch, deus ex being at 50 is pretty heart breaking.
There actually seems to be a good bit of games from 2015 on the list, nice legs
L

Code:
Street Fighter IV sold more units in 6 weeks than all Capcom games in 2016. It is true though that Dead Rising 4 counts as a Microsoft game.
R

That's quite a dip in software revenue.
K

Those QB numbers must have been horrid considering where TLG is. How about SFV?
G

U4 sold a ton of physical copies, for some reason digitally it didn't do so well but physical is more than made up for it.
I

Today I learned Rocket League was available at retail. And it looks like it sold pretty well! Good stuff.
D

I thought FFXV was low but then I saw Pokemon Sun and Moon.

It did well enough for 1 month of sale.
A

Xater said:
Fascinating how in the UK Xbox somehow remained relevant, while in the rest of Europe they lost almost all they might have gained last gen.
Click to expand...

UK is more like a smaller US.
Both lost big, but their starting point from last gen was much higher than in other countries.
B

Gurish said:
U4 sold a ton of physical copies, for some reason digitally it didn't do so well but physical is more than made up for it.
Click to expand...

bombshell said:
Uncharted 4 was #7 for the year on EU PSN.
Click to expand...

Oh, alright, in the US PSN it pretty much bombed.
U

The Division is so high, damn shame given the poor effort it made on release.

Also a remaster like Skyrim selling so damn much, again. Fucking amazing. ES6 will sell truckloads.

Forza Horizon 3 is the best seller on Xbox, that's huge, extremely pleased for Playground Games, MS have struck gold with them.
K

Ushay said:
The Division is so high, damn shame given the poor effort it made on release.

Also a remaster like Skyrim selling so damn much, again. Fucking amazing. ES6 will sell truckloads.
Click to expand...

Best selling new IP this gen. The hype post Destiny was real. Unfortunately the endgame was not compelling enough to keep people playing like Destiny.
H

Some interesting takeaways from the chart.

Forza horizon not only ahead of gears like i said, but way ahead
Beside a poor launch, watch dogs has overall good sales, even tho they include bundles
No man's sky without any legs at all
Halo is the only 2015 exclusive that still charted
Xbox has still stronger accessories sales with lover hardware units
F

Kill3r7 said:
Best selling new IP this gen. The hype post Destiny was real. Unfortunately the endgame was not compelling enough to keep people playing like Destiny.
Click to expand...

You mean at launch right? Because LTD I'm sure Destiny is higher
K

Fdkn said:
You mean at launch right? Because LTD I'm sure Destiny is higher
Click to expand...

At launch for sure. Destiny and Overwatch in all likelihood have sold more than it as far as new IPs are concerned.
R

Man, looks like FH3 was really successful. So good to see, it really deserves it.
K

Bruno, is FH3 the first racing game to make top 10 this gen or did one of the need for speed games pull it off?
A

Kill3r7 said:
Best selling new IP this gen. The hype post Destiny was real. Unfortunately the endgame was not compelling enough to keep people playing like Destiny.
Click to expand...

Best selling new IP is Destiny... The Division did less than it at launch.


Fdkn said:
You mean at launch right? Because LTD I'm sure Destiny is higher
Click to expand...

Destiny sold more at launch than The Division.

I did not check Overwatch.


Kill3r7 said:
Bruno, is FH3 the first racing game to make top 10 this gen or did one of the need for speed games pull it off?
Click to expand...

Delighted for Playground Games. I cant imagine many racers have made the top 10 for the year before?

Cannot wait to see what there new IP is going to be!!
K

do you have any more > < numbers for different chart positions?


ethomaz said:
Best selling new IP is Destiny... The Division did less than it at launch.


Destiny sold more at launch than The Division.
Click to expand...

Can someone run the sums on where combined Pokémon would have placed?

hanspampel said:
do you have any more > < numbers for different chart positions?
Click to expand...

No. I hope though that MCV at least publishes the December chart and tells us the monthly percentage changes for Battlefield 1, Watch Dogs 2 and Pokémon Sun / Moon so we can have their cumulative 2016 sales figures.

It is the biggest new IP from Ubisoft.
D

The power of Forza is scary.

Daybreaker said:
The power of Forza is scary.
Click to expand...

It is weird seeing that people bought into the Horizon way over racing simulator of main Forza.

I'm more a GT/Forza lover than Horizon but I see the appeal for this type of game and it is a good thing for the industry.

PS4 still won comfortably in both software and hardware in the UK. one of two markets Xbox is actually putting a fight. add the remaining of EU and the rest of the world to the mix and you realize why MS stopped releasing numbers.
K

Quite the drop from 2015, both in software and hardware revenues.
K

I bet the Division 2 will bomb as hard as Watch Dogs 2. Ubi are the masters of false hype but you need to actually make good games if you want to create a lasting franchise.
P

FH3 is one of MS's biggest successes this generation SW wise (relative to expecations). An absolute monster in the UK especially.
T

That says more about Forza then Gears really. The game is doing crazy good in UK. Probably UK dev helps also, had great retail promotions also. And its offcourse a good game with good word of mouth.
V

Most likely Digital is growing, Ps4 SW numbers are eclipsing Ps3 WW, there are already over 400 million SW sold across Physical and Digital on Ps4 which is miles ahead of Ps3 in the same time frame.

"For software sales, 369 million PS4 games have been sold so far, counting both retail and digital sales on the PS4. That's over 6 games per PS4 console on average."

As of December 3, add another 50 million after that:

"PlayStation 4 software sales during the 2016 holiday period reached more than 50.4 million copies globally through digital downloads of games or those sold in retail stores."

I realized I forgot to use a dot as the decimal separator, I only did it right with PlayStation 4.

In Spain we use commas so it is easy to get confused. Since NeoGAF is an English-speaking forum I try to use the English rules in Pal Charts and NPD threads but sometimes I forget.
K

Has GTA5 been in the top 5 for four of these annual charts in a row now?
You must log in or register to reply here.