Pretty much a given (though I could have expected January at the latest), but it's nice to get a confirmation that it is coming.

UK, September 1, 2008 - The first screenshot of the cloak suit from Killzone 2 has just plopped from Sony's loins and it's starting to get us excited about the forthcoming multiplayer beta. The pic shows a group of Helghast troops running along a darkened corridor  no surprise there  but the solider nearest the camera appears to be dissolving. It's the first time we've seen the game's active camo suit in action and players who choose the Scout class in the beta (and indeed the final game) have this cloak suit at their disposal, meaning they're incredibly difficult to spot in the middle of a firefight.

Here's how it works: with the camo suit equipped, players who remain motionless are practically impossible to see, appearing only as a visual glitch much like the Predator suit in the classic '80s movie. When you move the effect lessens somewhat depending on your speed, although you'll still be partially concealed if you walk slowly through the shadows, as displayed in the screen below. 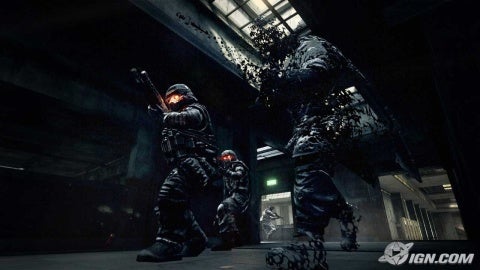 The Scout also has a secondary ability that enables them to tag all on-screen enemies with a hidden marker, broadcasting their coordinates to team-mates.

Sony has also lifted the lid on the other classes that will appear in the Beta, which is currently in internal testing and is scheduled to go live over the PSN later this year. First up is the Rifleman, who's the default troop type in the game. They start with a variety of primary and secondary weapons, including grenades, and bigger and better guns can be unlocked as you progress through the ranks. Then there's the Engineer, whose primary skill is the ability to set up an automated turret that targets the enemy, plus they can repair ammunition dumps, mounted guns and turrets that have been damaged in battle.

Although not a natural first choice to Beta players, the Medic can revive downed team-mates if they get to their bloodied bodies quickly enough, plus they can throw health packs which can be collected by other players. The Assault trooper is the heavy weapons guy and it kitted out with thick armour that can take twice as much punishment as a regular Kevlar vest. His secondary ability is a temporary speed boost that enables him to get stuck into a firefight in double-quick time, or run in the opposite direction if you're low on health.

The Tactician is the captain of the group and can drop coloured smoke grenades throughout a level, which serve as spawn points for the rest of the team. This skill proves essential on the bigger maps in the Beta as it allows for a steady flow of friendly troops on the front line. Tacticians can request air support too, calling in a sentry bot that fly low and tear through the enemy.

Finally there's the Saboteur, who can infiltrate the opposition by assuming the guise of a random enemy player and is also equipped with sticky proximity-activated C4 charges  perfect for lobbing near the enemy spawn point once you've crept through their ranks!

Here's the really interesting bit though - the classes in Killzone 2 aren't as rigid as those in other games, so if you choose to play as a Scout you're not necessarily limited to just those skills. Instead you're free to mix and match to some extent, taking a class's primary ability and mixing it with another's secondary. So, for example, if you choose to be a Scout but take the engineer's secondary skill it's possible to slowly sneak over to the enemy base without being seen, thanks to the cloak suit, and then place a sentry gun that makes mincemeat of the bad guys as soon as they appear.

Since both ISA and Heghast factions will have the same class types and abilities available to them, albeit with slight variations in the specific weapons and gear set-ups, it's pretty much an even playing field. However, with so much scope for playing around with the skills there really is every incentive to be as creative as you can, to get that much-needed advantage over the enemy.

We'll be bringing you an in-depth preview of the Killzone 2 multiplayer beta in the coming weeks so be sure to keep your field radio tuned to IGN.
Click to expand...
And a little rundown on the badges, for those who aren't familiar with the lineup yet.
M

I'm getting an "RTCW classes" feel to this.

Can't wait to get my hands on this, hopefully it's a fairly large beta and not only open to a few Sony l33t testers.
C

Tell me what I must do to get in, and I shall do it.
V

The classes sound pretty awesome.
Like they took the best from TF and Battlefield... can't wait to try it out.
W

Will be the multiplayer FPS shooter game of the forever when it releases.

NutJobJim said:
Can't wait to get my hands on this, hopefully it's a fairly large beta and not only open to a few Sony l33t testers.
Click to expand...
Welcome back nutjobjim I know how you feel man :lol

McLovin said:
Welcome back nutjobjim I know how you feel man :lol
Click to expand...
Why thank you McLovin, and may I compliment you on your rediculously awesome avatar :lol
F

This game is sounding more and more interesting. Now I just need to get my hands on it.

Is it going to be an open beta ala Halo 3 or Call of Duty 4? Well open, as in I have to sign up somewhere, or something like that.
S

Hyped for a beta entry. Seeing as I didn't get one for R2 or Home.

The more I see on this game the more hyped I get and I hope this beta isn't Qore exclusive because I am not paying for that crap.
D

I better get in this beta
D

They should just do an open beta. These closed betas are bullshit.

Open beta's what got me to pick up COD4.
J

this game seems like its going to be so awesome, but im still not sure... ill still buy it, but i would be really disappointed if none of this works out well.
T

Pai Pai Master said:
Pretty much a given (though I could have expected January at the latest), but it's nice to get a confirmation that it is coming.

EDIT: Scratch that, I see the OP was edited after you posted. My apologies.
F

So that leaves us with R2, SOCOM and K2 betas this fall .
J

I need to be in this one.
M

For how much i dislike Killzone i must get into this to see if it can change my mind, DO WANT.
S

They should make something in the ending cutscene of Killzone 1 the clue to getting into the KZ2 beta.
M

Yet another one I won't get into.
O

That sounds cool and all, but, wtf does a scout need to be able to build a turret? What is the point of classes when they all can get some ridiculous attribute/tech skill from another one? I could see the sniper having the cloak, but, the scout too? Heavy weapons dudes that can run fast, with the heavy weapons equipped? o.0

I really need to see how they balanced this.
B

Metalmurphy said:
Yet another one I won't get into.
Click to expand...
you and me both brethren!

I've pimped the first one for like three years. If I'm not in this then Sony sux.

I would hope that unpaid viral marketing gets rewarded with a beta OCCASIONALLY. Since I was not in Home. NOT THAT I WANT TO BE ANYMORE THANKS SONY.
M

Y2Kev said:
I've pimped the first one for like three years. If I'm not in this then Sony sux.

I would hope that unpaid viral marketing gets rewarded with a beta OCCASIONALLY. Since I was not in Home. NOT THAT I WANT TO BE ANYMORE THANKS SONY.
Click to expand...
Obviously, you joined the wrong team. Besides, ps3 MVP just doesn't have the same ring to it as xbox MVP.
C

Hopefully this can come in a Qore episode(along with pre-order/random pick), that way ppls can choose to be in it or not. I'd rather pay 3 bucks then not get a chance since I'm a big fan and really hyped for the damn thing.
S

Any idea if this is going to have keyboard & mouse support?
P

speedpop said:
Any idea if this is going to have keyboard & mouse support?
Click to expand...
No reason it would, even if a few would like the feature.
T

maybe this time next year. Sony sucks with dates.
G

Damn this sounds good. Wish I had a Ps3
T

Oldschoolgamer said:
That sounds cool and all, but, wtf does a scout need to be able to build a turret? What is the point of classes when they all can get some ridiculous attribute/tech skill from another one? I could see the sniper having the cloak, but, the scout too? Heavy weapons dudes that can run fast, with the heavy weapons equipped? o.0

I really need to see how they balanced this.
Click to expand...
Scout = sniper, and they can't build turrets - only the secondary skills can be mixed, so a scout will always have cloaking, although they can repair stuff (so you can play as the Robert de Niro character from Brazil presumably...).
S

They should release it nice and early. From the videos it already looks polished quite a bit, if they can get it out early then we can test it and help them to tweak it to perfection.
M

The game comes out in Feb. Considering how long its been in development, and how great its looking with a good number of months left, I doubt it will get delayed.
R

Rikyfree said:
Leaked multiplayer beta vid, thanks to ShinMegamiTenhead from GT. http://www.gametrailers.com/player/usermovies/262294.html
Click to expand...
someone youtube this asap please.

How the hell is there a leaked beta video already? I thought there was only an internal beta going on.
K

The sound effects are awesome... Great graphics. Has this been one of the biggest turnarounds for a franchise? Of course you can say liberation, but from the main entries in the series, this is huge.
D

Rip on Killzone for being technically deficient all you want, that game had a ton of style. Fantastic soundtrack, and the most varied level design and environments I've possibly ever seen in a shooter.

This one's on the right tracks from my point of view.
T