Intel's 10th generation Core "Comet Lake-S" desktop processor series inches chose to its probable April 2020 launch. Along the way we get this fascinating leak of the company's Core i7-10700K desktop processor, which could become a go-to chip for gamers if its specifications and pricing hold up. Thai PC enthusiast TUM_APISAK revealed what could be a Futuremark SystemInfo screenshot of the i7-10700K which confirms its clock speeds - 3.80 GHz nominal, with an impressive 5.30 GHz Turbo Boost. Intel is probably tapping into the series' increased maximum TDP of 125 W to clock these chips high across the board.

The Core i7-10700K features 8 cores, and HyperThreading enables 16 threads. It also features 16 MB of shared L3 cache. In essence, this chip has the same muscle as the company's current mainstream desktop flagship, the i9-9900K, but demoted to the Core i7 brand extension. This could give it a sub-$400 price, letting it compete with the likes of AMD's Ryzen 7 3800X and possibly even triggering a price-cut on the 3900X. The i7-10700K in APISAK's screenshot is shown running on an ECS Z490H6-A2 motherboard, marking the company's return to premium Intel chipsets. ECS lacks Z390 or Z370 based motherboards in its lineup, and caps out at B360.

With a TDP of 0w this will pay for itself. Intel just knocked it out the park.

Reactions: Joe T., The ninja farmer, Iamborghini and 4 others

Wait a moment, the simple boost without need for overclock is fucking 5,3 ghz?

The wattage of cpus is out of control now.
Reactions: Celcius, Elektro_Demon, Rentahamster and 1 other person

Reactions: llien, Iamborghini, _Justinian_ and 2 others

stranno said:
Prepare your delid tool.
Click to expand...
They’re already soldered and so was the 9700K/9900K.

Fuck the 14nm ++-+/* node and go straight to 7nm Intel if you want me to be excited about your CPUs.

i have a 9900K and honestly temperatures are fine unless you're pushing heavy AVX workloads. i had mine hit 100C in stress tests but normal usage + gaming + video editing/rendering the temps are reasonable. my CPU is currently sitting at 26C just browsing and listening to music. in games it sits at about 40-60C depending on the game but usually 40-50C. never goes above ~70C if i'm doing 4K video work. this is with it running at 5.1Ghz

If anything, I'd undervolt and underclock such CPU to have still outstanding performance but dead silent cooling. Because how much (if any) performance gains are there above ~4,5GHz? Just slap a 280/360 AIO on it and you're set a for another decade (or whatever the next-gen consoles will last).
Reactions: Epic Sax CEO

KungFucius said:
Fuck the 14nm ++-+/* node and go straight to 7nm Intel if you want me to be excited about your CPUs.
Click to expand...
that's what they are doing, i think. 10nm seems to be just for mobile/low powered chips so they are staying on 14nm for desktop.

when the Lake-series is replaced by the Rapids-series i think that'll be when we get 7nm desktop CPUs (plus DDR5/PCIE5.0). Sapphire Rapids is probably going to be next year.

Reminds me of Pentium 4 netburst shit, until Conroe comes along and wipe the shit out of the old design. I have hard time to cool down R9 3900X on full load OC'd to 4.4Ghz, not really sure what this CPU TDP is.

stranno said:
They can be delidded too. Rockit 89 works perfectly fine (9900K here).
Click to expand...
blly155 said:
you can still delid it though.
Click to expand...
I think he's referring to the fact that you don't really need to delid them anymore.

They used to use a shitty thermal paste between the chip and IHS, these days they use a high quality soldered metal for better head dissipation.

I vaguely recall reading somewhere that delidding is kind of pointless on these nowadays.

I like the jump from 14nm ++ to 0nm. It really shows how crucial that jump was in terms of power consumption.
Reactions: llien and Insane Metal

blly155 said:
yeah well if you're OC'ing it then it will go higher. 5.3 on how many cores? What is the all core boost?

Even if someone were to not completely boost it to 5.3, this CPU will still be great for emulation.
Reactions: nkarafo

Kinda pointless, is probably going to be one or two cores, lets see first how that chip holds up with a overclock on all cores and even then 200mhz more over 9900k isn't going to be that much interesting.
We need 7ghz cpu's.

Here is CPU ONLY power draw. You guys can see that Intel is a power hog. I imagine this CPU would be 300 watts or more. 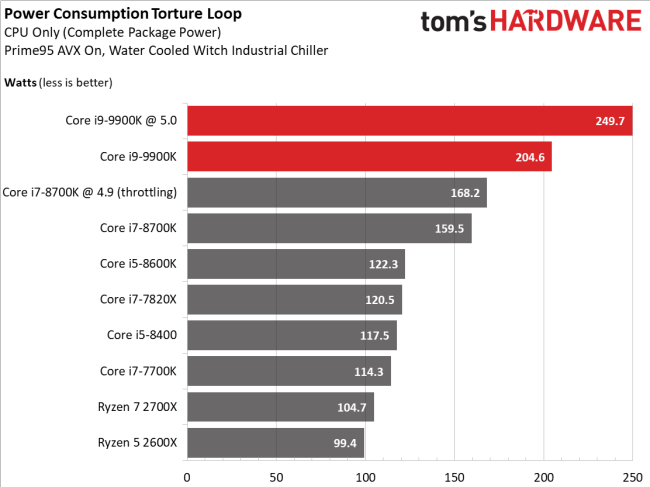 Here is another comparing against recent AMD 3000 series CPU.

If they price it higher than 3700x then why bother

GymWolf said:
still impressive isn't?
Click to expand...
It is... but a 9900k all core 5Ghz oc is quite east to get. What would be more impressive if its 9900k performance or better for $400 but that remains to be seen.

But wth.. can't wait forever
Click to expand...
Nothing wrong with that chip.