From Nintendo's list of games in development for the platform, has Konami confirmed this?

Has anyone else confirmed this?

It feels like Nintendo thinks its next console is actually handheld, titled the 3DS, geez!:lol

I'm excited since MGS3 is my favorite Metal Gear, but I have to wonder...does Kojima have a huge man-crush on Big Boss right now?

How much Big Boss do we really need?
R

Please not a rehash, I want as many new Metal Gear games as possible. Not that I wouldn't get it day one anyway.
G

Here's a short, poor quality video of it:
http://kotaku.com/5564183/checking-out-metal-gear-solid-on-the-nintendo-3ds
A 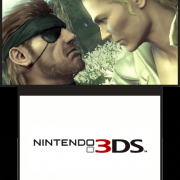 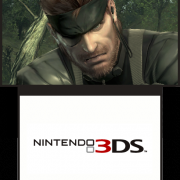 Kojima said he's "experimenting" with the 3DS. Naked Sample is just him messing around with it the hardware.
C

Wait... Is this a port or something like FFVIIS3 Demo?
P

If it is a rehash of Snake Eater I hope they include crouch walking.
Z If so, bleh, was hoping for something new using the 3DS
G

My premonitions of Kojima using the 3DS screen to obscure one eye's view with an eyepatch are becoming reality :lol
B

Gribbix said:
Here's a short, poor quality video of it:
http://kotaku.com/5564183/checking-out-metal-gear-solid-on-the-nintendo-3ds
Click to expand...
booooooooooooooooooooobs
B So it's basically just a port of MGS3 from the PS2? (with added 3d obviously)

josephdebono said:
http://www.konami.jp/kojima_pro/e3_2010/mgs3d/en/
Click to expand...
So it's pretty much a given that the 3ds will be on par with what the psp/ps2 is capable of? (graphics wise).
E

Just wow if it can output graphics of this quality!
R

So a modified Snake Eater port?

best metal gear for sure

Gribbix said:
Here's a short, poor quality video of it:
http://kotaku.com/5564183/checking-out-metal-gear-solid-on-the-nintendo-3ds
Click to expand...
Bet he's not even looking at the screen..
B

shaft said:
PS2 graphics = win.
Click to expand...
I think those are PS2 graphics, but looks cool none the less.
U

Wow are those graphics real?
T Goddamn. Nintendo wins.
THE BEST GAME EVER ON A HANDHELD SYSTEM.
V

According to the other thread it's a remake of Snake Eater (MGS 3)?. Screenshots above seems to confirm that.
C

Man, I am pretty much speechless. Not just at this, but at the 3DS in general and the list of announced games. Today is a good day.
K

Wow even the 3DS gets a snake game. I don't think konami will ever put snake in a game on the 360.
M

Thank you for answering all of my prayers at one time. Maybe they weren't verbatim what I asked for at the time, but I'll take the bounty you are giving me today.
S

How did Nintendo know that MGS3 was my favorite MGS game

How did they tap that particular vein
A

gimmmick said:
So it's pretty much a given that the 3ds will be on par with what the psp/ps2 is capable of? (graphics wise).
Click to expand...
looks better than peace walker LINK
O

Pai Pai Master said:
I'll take it.
Click to expand...
Me too
S

This is the best MGS game. I'm hyped.