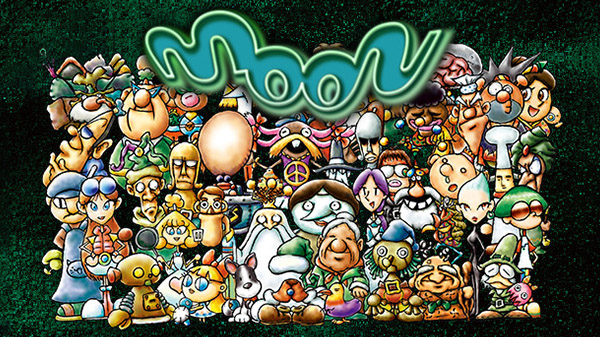 Onion Games will release Moon for PC via Steam, the developer announced. A release date was not announced.

Moon first launched for PlayStation in October 1997 in Japan, followed by Switch in October 2019 in Japan and August 2020 in the west.

In 1997, the now legendary anti-RPG moon launched in Japan. Now, under the watchful eye of its original creators, it’s finally in English!
Have you ever felt it odd that the heroes of RPGs go around opening villagers’ closets and stealing from them? Or that they travel the world indiscriminately killing all monsters they meet? This game looks at the RPGs we all know and love from a new perspective.

Story
One moon-lit night, a young boy is sucked into the depths of his television set. He falls into a place called ‘Moon World’, and thus begins a search for love in order to recover the lost moonlight.

Here, the mighty hero of Moon World murders innocent animals for experience, but the boy’s growth comes from saving the souls of the animals and gathering the love in the world.

Yes, in this game, you level up by loving, not fighting.

The inhabitants of this world are all unique. Observe their daily lives and learn where they hide their secret love.
“Now, please, open the door!”

An RPG without Battles: Save the Monster’s Souls
All the monsters killed by the ‘hero’ are actually just innocent animals. As you explore the game, you will encounter the bodies of these pitiful creatures. But, if the boy can catch their souls, they can be saved.

A Living, Breathing World! Peek into the Secret Lives of the NPCs
Moon World’s residents go about their routine lives, depending on the time and day. The florist goes to work in the morning, and the castle guards arrive at their posts. Some folks have secret midnight hobbies, and others just spend their days fishing.

MD System: Choose Your Own Soundtrack
In moon, you can choose your own music. By using the special music playing Moon Disc (MD) function which appears in the game, you can walk around the map listening to the tracks you like in the order you set them.

Sorry I can't speak to the game but I love this so much, memories of university days being pissed/high and listening to this at 5am with mental pillhead downstairs neighbours.

I should pick that back up, played a couple of hours on the Switch but it's a weird and confusing game. Also not really a fan of the artstyle.

That weird "catch" pop-up gives me Petscop vibes, I wonder if they were inspired by this game somewhat.

Kuranghi said:
You ever listened to the Radio Show?:
Click to expand...

I've watched the show a lot but haven't listened to the radio show. I'll check it out. Thanks.

Bullet Club said:
I've watched the show a lot but haven't listened to the radio show. I'll check it out. Thanks.
Click to expand...

I don't want to overhype it but I think its funnier than the TV show a lot, because they have a near infinite budget due to you having to use your imagination lol

On to the wishlist it goes, thanks.

Kuranghi said:
Sorry I can't speak to the game but I love this so much, memories of university days being pissed/high and listening to this at 5am with mental pillhead downstairs neighbours.

Didn’t even know this was a thing - thanks!
You must log in or register to reply here.