Bloodborne is the cover story of this week's Famitsu, and there's an interview with Miyazaki in it as well. Here are some details reported by a Japanese blog who got the magazine early.

- Spring 2015 release window
- They started work on this right after finishing Artorias of the Abyss, planning it for Sony's new hardware
- The world and story is completely new, and the setting takes full advantage of the PS4's capabilities
- The expected spec for the game is 30fps at 1080p
- The keywords for the game is "blood" and "beast"
- There will be melee and long range weapons (guns) this time
- Character customization is confirmed
- There will be no map display in the game
- He wants combat to not just focus on action but also the strategic element
- The combat in the game is designed to feel like a life or death struggle
- There will be online elements of some sort, and it will involve players "discovering" together


Edit: In case anyone missed it earlier, here's the official game blurb from Sony: http://www.playstation.com/en-us/games/bloodborne-ps4

Introducing Bloodborne, the latest Action RPG from renowned Japanese developer FromSoftware, exclusively for the PlayStation®4 system. Face your fears as you search for answers in the ancient city of Yharnam, now cursed with a strange endemic illness spreading through the streets like wildfire. Danger, death and madness lurk around every corner of this dark and horrific world, and you must discover its darkest secrets in order to survive. 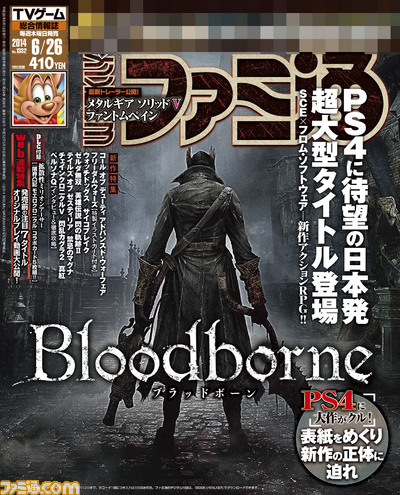 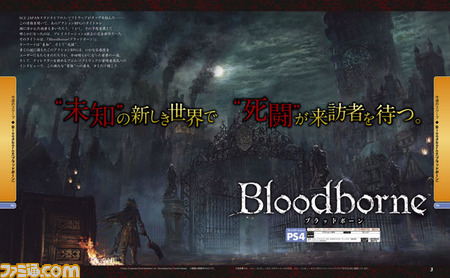 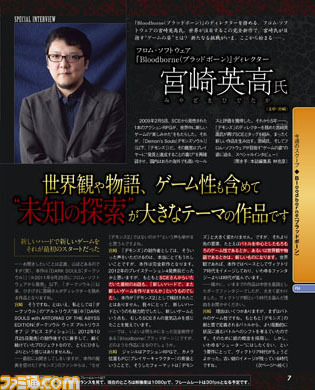 I will buy a PS4 for this

Hopefully we get some in game footage this week
B

I'm really interested in the last point you mentioned. They revolutionized online interactions with the co-op/invasion process. Really excited to see what else they can come up with.
A

duckroll said:
- There will be online elements of some sort, and it will involve players "discovering" together
Click to expand...

Large but hole ahead

Sounds like soulish gamedesign. sounds good to me.
E

game sounds way further along that i thought. woah.
S

The online thing is interesting, I wonder if it refers to the online community aspect of the Souls games, people trading tips and things, or something more literal, like in DS2 where you have to kill certain enemies so their souls open gates. Maybe players globally working together on specific tasks to unlock things in game, that would be pretty cool. Like that stretching boy game.
S

Yep, this is sounding/looking fantastic.
D

It doesn't have to be exactly like a Souls game, but I would like the combat to be somewhat similar and I want very high difficulty. As long as those 2 boxes are checked, then I'll be happy.
Y

Is this Project Beast?
T

This is one of my most wanted game on the PS4 so far. Really interested in this.

I will buy ANOTHER fucking PS4 for this.

I started off by being sceptical. The name... and the worry that you couldn't customize your gear.

Now I'm hyped like a motherfucker and this will be THE Demon's Souls of this gen!

Did you really expect they'd make it to 60 FPS?


Vashetti said:
Is this Project Beast?
Click to expand...

inject this into my veins!!!!
H

So hyped for this...

I'm really excited that they went for a new world/universe. This whole Victorian werewolf era thing just looks so cool and dark. Just awesome design all around from what we could see in the trailer.

This coupled with the souls gameplay ( which this suggests it's going to be maintained ) makes this my most hyped game for 2015 easily..
B

Everything sounds good so far. I really want to see some high quality gameplay of this
G

can't wait to see it in action..
J

Fantastic. The character custumization was the thing I wanted to know! An even more intense battle system sounds great. Wonder if this will be even harder than Souls.
J

The small fence I had been perched on has been destroyed. I'm in.
S

Vashetti said:
Is this Project Beast?
Click to expand...

All Souls games are 30fps on console and perfectly playable. I wasn't really expecting this to be any different. 60 would be nicer, sure, but it would have been a big surprise.
C

Day One. I'd follow Miyazaki into the bowels of the darkest hell.
A

Any news on who's the composer for the game?
D

ttocs said:
I'm really interested in the last point you mentioned. They revolutionized online interactions with the co-op/invasion process. Really excited to see what else they can come up with.
Click to expand...

Yeah I hope Miyazaki comes up with a new sort of online interaction. Demon's Souls introduced bloodstains, messaging, and summons/invasions. Dark Souls had all that and added on the Covenant system. Hopefully there's something refreshing here too. The marketing says the game is about "discovery of the unknown", so it'll be interesting to see how that plays into the actual game.

This was the best new title I saw.
K

Spring 2015 is much sooner than I expected!

Why didn't they show any gameplay footage if the game is that far along?
G

Bummed about 30 FPS. Other than that though, it sounds like a dream.

- Character customization is confirmed
- There will be no map display in the game
- He wants combat to not just focus on action but also the strategic element
- The combat in the game is designed to feel like a life or death struggle
- There will be online elements of some sort, and it will involve players "discovering" together
Click to expand...

Hoping this game will finally pull me into the Souls fandom.
H

This is seriously a dream come true...


I can't believe that a game this great has actually been worked on for a long time and ISN'T vaporware concept CG thrown around at E3.This won't be TLG or VersusXIII.

all over my face
S

Dio said:
All Souls games are 30fps on console and perfectly playable. I wasn't really expecting this to be any different. 60 would be nicer, sure, but it would have been a big surprise.
Click to expand...

So why did Project Beast look quite fantastical and medieval-y? (Demon Souls, Skyrim-esque visuals, but super clean).

Only targeting 30FPS at 1080p? I know that FromSoft isn't the best devs with technical expertise but that still quite a bummer. Anyway, who am I kidding? When will get another demon/beast hunter action RPG from the very director that have crafted the beautiful world of Demon's and Dark Souls?
D

I hate to be that guy, but: Why do From always insist on 30fps console versions? It's an action game ffs. From PLS!

Still getting it, and a PS4 to go along with it, but damn, I really expected them to go for 60fps on the new hardware
S

Honestly, if one of the bullet points was "* Gives you AIDS" I would still e hyped for this.
R

Dark Souls 2 left me with a bad taste in my mouth. I need Bloodborne to wash it down with! GIVE IT TO ME NOWWWWWW
V

Oh man... 30FPS is a bummer. I seriously don't understand why they're targeting 30FPS. Just use the power of the console for maximum responsiveness and gameplay. I've never cared about graphics in Dark Soul games. Just give me something that looks reasonably good and I'll be happy. Ugh.

Will buy and play furiously regardless.
S

eXe said:
ALL OVER MY FACE!
Click to expand...

Monday at 3:15 PM started DonJorginho
Tuesday at 5:32 AM
Sinthor
2
Trailer Yakuza: Like a Dragon for PS5 launch trailer, a free upgrade from the PS4 version