Parts of description text are from Mafia 2 listings.
D

Mafia is one of my favorite franchises ever. I need another one!
G

Never played Mafia. From the replies in this thread, sounds like I should be excited for this.
D

Note: Read from bottom to top: 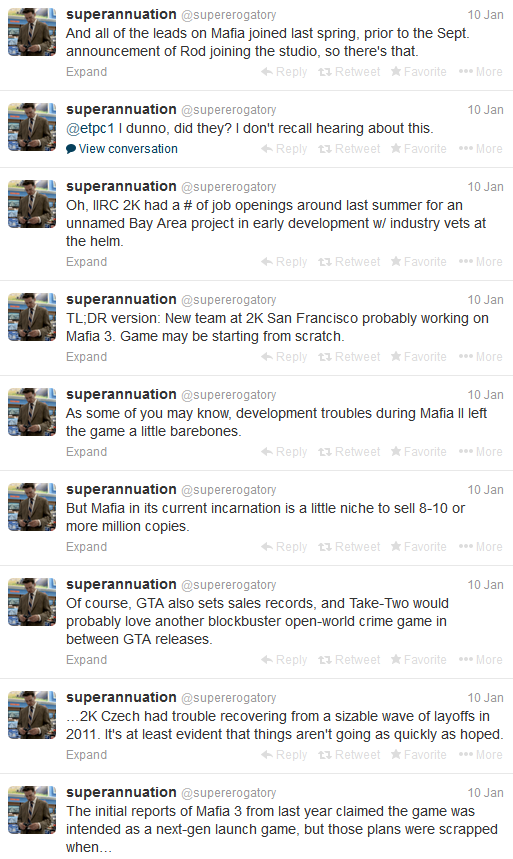 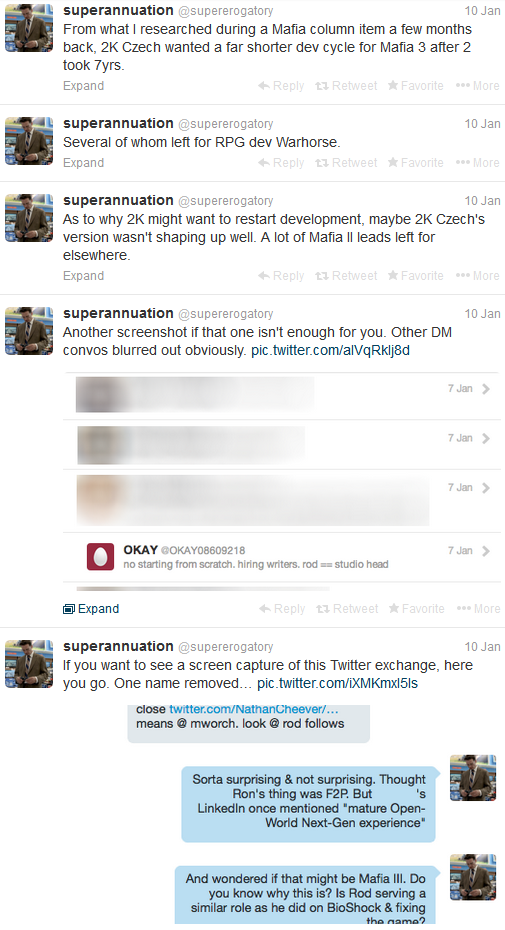 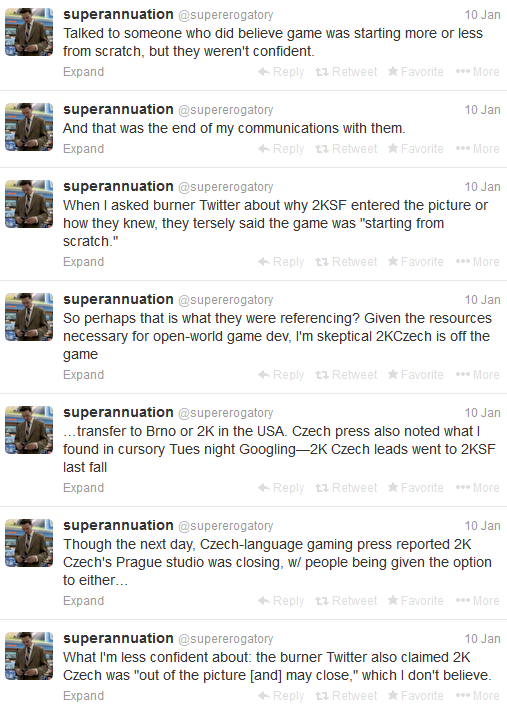 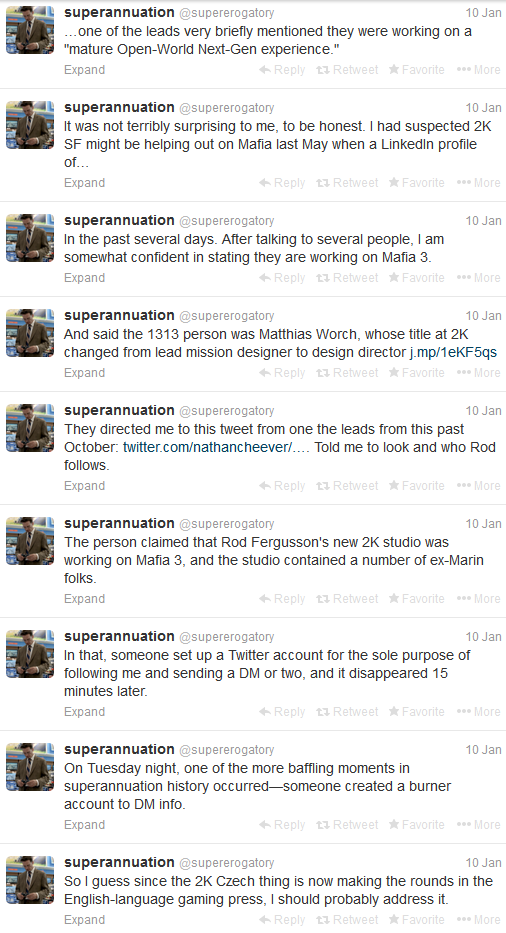 Mafia 2 was so damn good. I've been waiting years for another.
K

Sweet I wonder if that means its 2015 most likely?

So I guess I'm the only one who thought Mafia 2 was total ass then? I can't get excited for this.
W

Fixed that one for you. Maybe my favorite game.

When it comes to Mafia 2... ehh, it was okay. The ending was more abrupt than in Sopranos, and definitely felt worse. Not that the rest of the story was anything memorable either. It looked good at times and played okay. And they did the setting justice, but if the next mafia is like in the 70s or something count me out.

It needs to go back to the 30's or even 20's, and have more of the charm of the original. Most importantly, if they're going to make another open world then now's the time to actually make a reason for it. Back in 2001 it was novel to just have an open city you could roam in without much to do but it's just not enough anymore.

And there has to be a countryside! Man it felt like playing Journey or something when you drove around that countryside. And now they could make it so pretty and amazing.

i loved mafia 2 a great deal, super excited. populate your world and throw in some side stuff and we're golden
D

Note: Read from bottom to top:
Click to expand...

Whoa. See I thought that a lot of the devs left to help Vávra and Blaho to do Kingdom Come. I had not seen the 2K Marin news...

Mafia is superior but they're both great games.
R

i've been begging for over 5 years.

Well they won't have to scratch out too much because Mafia 2 was as bare bones as an open world game can get.
M

Oh fuck yes! I loved Mafia II, played it again last year when it was a PS+ game and would love a current gen Mafia.
P

As far as i know this happened before on other Web Store.
S

The break into the police station mission is one of the most subtly brilliant missions Ive ever played. You actually have to listen to your companion on the way there to figure out what room you need to get there and how to get there. If you dont listen, you have to find out where the office is on a map...thing is you dont have a map...so you have to find one.
So I sat there thinking....where the hell is a map...then it dawned on me, hey dont most buildings have a map by the entrance? But I took some weird back entrance so I had to duck and dodge my way past guards to get to the entrance where hey look a visitor map. But the game doesnt notify you that you found the map...you have to realize it yourself and figure out where you are in relation to the office.
Rest of the game doesnt feature anything like that, but it was a really neat way of thinking I hadnt experienced in a game before.

Also it can not be stated enough that Mafia 2 was one of the best cover based shooters ever. Enemies go down quick, but so do you, its a real cat and mouse and you need to be really fucking cautious, but so do your enemies. Really really under rated game.

EDIT: My only slight against the game is that the overarching story seemed really unfinished, what was there and the missions themselves were fantastic though. Basically looked like they had to cut a lot, but what they had was fantastic. Loosely tied great scenes.
R

Mafia 2 was brilliant
pls happen
A

Shit yeah, you know what you have to do Rockstar. Make this a true open-world game ala GTA and Read Dead, and we will line your pockets with copious amount of dough. So bought either way though if real, Mafia II was sooo good.

Edit: Why would play-asia have the scoop on a western game, nevermind a Rockstar release? Either way, seems like it could be legit.
O

3 is being made but this listing doesn't mean much.

Just please guys making this...keep the game smart. Mafia 2 was subtly clever in a lot of ways and had some really good story beats and missions. Just hope they dont take too much influence from handholding in other open world games that are all to eager to show you the map to every little thing.

EDIT: Really hope they keep some of the ballsier gameplay/story
Taking away all of your money and cars because your house burns down in the story and putting you in a small apartment
L

Great if true. Mafia 2 was great. Mafia 1 was a masterpiece.

Listening to the main menu theme from 2.

eravulgaris said:
Mafia is superior but they're both great games.
Click to expand...

Amen to this.
B

Let's get it
P


ALLseeingEYE said:
Shit yeah, you know what you have to do Rockstar. Make this a true open-world game ala GTA and Read Dead, and we will line your pockets with copious amount of dough. So bought either way though if real, Mafia II was sooo good.

Edit: Why would play-asia have the scoop on a western game, nevermind a Rockstar release? Either way, seems like it could be legit.
Click to expand...

Except is not a Rockstar release.
D

Valar Morghulis said:
Listening to the main menu theme from 2.

Also one of the best scenes in any video game

I absolutely loved Mafia II! Day one of this actually exists.
B

never got to play mafia 2, looked good tho
N

dex3108 said:
Also one of the best scenes in any video game

lovelovelove re-playing that section right around now, during the Holidays! Such good Winter vibes!
You must log in or register to reply here.