Penguin said:
Do we have sticks?

For comparison, the E3 model: 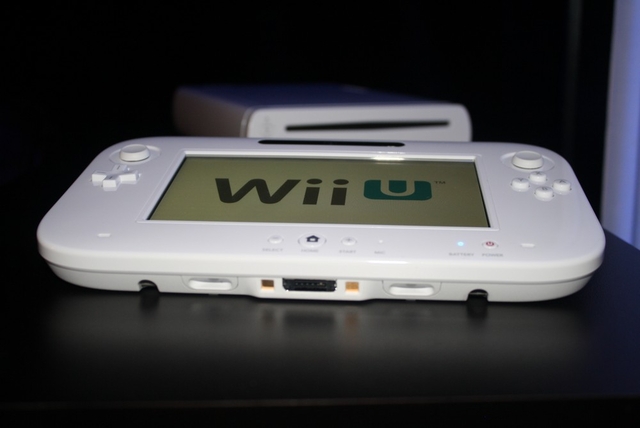 Infos from our resident French Leaker:

IdeaMan said:
1 - The first, according to my sources, the screen size is slightly bigger. Less than an inch. The resolution hasn't changed though. So there would be a slight decrease in the PPI.

-> Nintendo warned developers of this several weeks ago, it is not obvious on the picture leaked, which would reinforce either the smallness of this increase, or the event that it wasn't implemented. Anyway, it should be taken into account in the comparisons, gif, etc, made between the E3 2011 DRC and this one, as the screen is not the same, therefore the proportions are not identical. People should not resize the new padlet in regard to the previous one, by assuming the screens could be fully juxtaposed.
-> This size alteration could hint toward a screen type change, we should see at E3 and compare its characteristics, brightness, contrast, overall quality, etc..

2 - This "new" screen is still not multi-touch apparently.


3 - The mysterious small square under the D-PAD, is not a vitality sensor, not even in a light version, not a touchpad, not a mini pulse sensor as on sports equipment, not a decorative thing, or whatever. This is the NFC sensor.

-> The demonstration of this feature in the Rayman leaked video isn't representative of how it will work, such a use could obviously have bad consequences for the screen if people would put figurines briskly on it.
-> This technology has an optimal range very limited (a few centimeters), placing the NFC chip in the middle of the controller, behind the screen, wouldn't have been good for several reasons (related to the display), and wouldn't be the most practical and efficient choice to recognize, to establish communication without any problems, with NFC tagged objects, and people would have put those very close to the screen with the risk to damage it.
-> Putting the sensor on one of the controller side, is a way to extend and clearly define the NFC range in this zone. When we lay it down on a table, our knees, etc, we can put more practically and safely in this virtual perimeter near the left DRC border NFC objects, some of which being heavy or with edges that could deteriorate the padlet.
-> It's possible, in order to properly recognize the location of the NFC, and to inform people of this feature, that there will be a sign, a sticker, on this square.

4 - The small button near the power remains mysterious for third-parties. It isn't a touchpad, an additional game input, or other exotic feature apparently. It may be related to the asymmetrical setting of the system. Basically, it could allow an instant switch between the TV and the DRC. Grain of salt for this.

5 - As I said, these changes are documented and third-parties are informed of those for months. It appears they just received the updated padlet. This could be due to logistics, manufacturing, delivery, etc., but it's certainly indicating Nintendo spent some time, until rather recently, to tweak and polish the DRC we'll see at E3.
.
Click to expand...

We have sticks.
B

ROFL! You wasted no time.
I

Thought we already knew this.

I need to stop knowing secret info for no reason...

EDIT: Start and Select buttons moved? Not sure I knew that. YAY!
S

They better be!
T

As long as its comfortable, I don't care - just looks odd is all.

EDIT: Movement of the start and select buttons is stupid.

I imagine this has been discussed to death in the megathread.
K

Well, it looks a LOT better than the first one.
U

Hope so.
Is that convex or concave? I can't tell.
K

I want to hold it! Also, I hope them sticks click.
S

that controller looks so awesome!!!

I'm guessing that guy is getting fired for this.
M

I kinda like the older one tbh, purely aesthetically.

This one looks even more like some device from a cheesy sci-fi flick.
V

It looks bigger then from E3, and new Start / Select placement.

Fuck those slide pads. Hated them ever since PSP.


The M.O.B said:
I'm guessing that guy is getting fired for this.
Click to expand...


Yenrot said:
I imagine this has been discussed to death in the megathread.
Click to expand...

That controller is gunna be sweet.
E

They've moved the Start and Select buttons, too.

Lovely stuff. Let me see the back, now.

EDIT: The buttons and D-Pad are closer to the screen, too. Looks a lot like the prototype sketches that were thrown about a while ago.
D

Getting real analog sticks is the right move. I don't think anyone likes those half-assed or "fake" kinds.
N

It looks like the sticks were moved outward a bit as well.
S

Unbelievable, I love the GameCube analog-stick feel! THANK THE HEAVENS.

Holding it in general doesn't seem very comfortable
A

bgassassin said:
ROFL! You wasted no time.
Click to expand...

Yeah, that was confirmed a bit ago.
J

It's sooo beautiful!!! The one thing I fucking hated about the controller, though I still wish they would swap the face buttons with the right analog stick/nub but oh well.

EDIT: Oh wait, they also moved the right stick slightly to the side, much more comfortable than having it directly on top of face buttons
W

Wow and some minor button layout changes. But do those sticks click?

The new version of the pad looks really classy. I'm so excited for E3.
F

What is that square underneath the dpad?

White Sticks = It's gonna turn yellowish/brownish after a group of people have their way with it.

Sticks have been moved outward. That's the first thing I noticed.
S

Really happy that they've gone back to real analog sticks. The slide pad made sense for the 3DS because of the clam shell design, but there was no reason for them to be in the Wii U controller.
A

I guess this means Wii U is still the name of the console then.

The M.O.B said:
White Sticks = It's gonna turn yellowish/brownish after a group of people have their way with it.

My launch Gamecube controller is still white. Take better care of it.


Ammish said:
I guess this means Wii U is still the name of the console then.
Click to expand...

Analog Sticks, Sticks moved outward and the new location of the start and pause buttons are the changes, right?

Yeah, that was confirmed a bit ago.
Click to expand...

Source? Link?! This is sooooo going to make my day!
G

The success of others absolutely infuriates me.

upJTboogie said:
Hope so.
Is that convex or concave? I can't tell.
Click to expand...

I'm not ecstatic about how the sticks look but at least they fixed the start/select placement.
P

Y2Kev said:
Sticks have been moved outward. That's the first thing I noticed.
Click to expand...

Great news, circle pad is fine for a handheld but I want sticks for a console any day.

Now all I wish it had was a capacitive touchscreen which isn't gonna happen.

What makes this better than before? Were they like the sticks the PSP has?
You must log in or register to reply here.