Hey y'all, thought it might be useful we have a thread to discuss TVs and general developments around them for this year. After all, it's not only consoles but also PC gamers more and more who are choosing to use on as their display, and frankly they offer vastly superior picture quality for the money compared to the monitors. So why not?

F.A.Q.
What's the difference between OLED & LCD?
- The most important difference is in the backlight. OLEDs are self-emissive displays where every pixel lights up independently, while for LCD it requires a coarser backlight which isn't capable of such precise control (for normal consumer displays). What that means is with an OLED you will have much better contrast, while with an LCD you can have more brightness but will not have such precise control, which will result in blooming (light halo around an image, so for example when showing a star in space the star will light up but so will the area around it so instead of the area being black as it should, it can be greyer; see this photo).

What's a FALD?
- Full Array Local Dimming is a way of exercising more precise control over the backlight in an LCD. Generally the more zones the better, but most importantly for a FALD is the algorithm controlling these zones otherwise they will be ineffective. Generally these are still quite large and cannot get close to the per-pixel control of an OLED, but are cheap & still effective for HDR.

What's miniLED?
- This is a more fine-grained version of FALD where instead of having a few large zones controlling the backlight you have many more zones which are composed of thousands of mini leds (hence the name). This is a way in which LCDs can rival OLEDs for contrast, but retain their traditional advantages of being brighter & (somewhat) cheaper. A good algorithm is CRUCIAL here or you will have worse results than a FALD and see black crushing (detail no longer being visible in darker areas) or delayed lighting transitions.

What's QLED?
- This is simply a marketing name for LCDs with a Quantum Dot colour filter. It's mostly a Samsung term, but others vendors have used it as well. Similar to it we have Nanocell for LG, or Triluminos for Sony.

What's QNED?
- This can refer to two different things. One, it's a marketing name for LG's upcoming miniLED TVs. Two, it's a display technology that's years away, being developed by Samsung, called Quantum nano-emitting diode, similar in scope to OLEDs and LCDs.

What's microLED?
- Microled is a display technology that tries to marry the strengths of both OLEDs (per-pixel illumination) as well as LCDs (high brightness, no burn-in). It is done on a per-module basis so you can think of them as putting a bunch of tiles together, so you'd get a much larger display. It is mostly a technology for businesses as the costs to manufacture them are extremely high and not meant for regular consumers. It's assumed to be "the future" of display tech. Time will tell.

What's HDMI 2.1?
- In short - it's how you connect your display to your computing machine so that you can display video and reproduce audio. The advantage over the previous HDMI 2.0b is that it has a lot more bandwidth, which enables 4K 120hz & 8K 60hz at 10/12bit. Besides that it can also offer new features such as VRR, eARC, ALLM, etc.

What's VRR, eARC, ALLM, etc.?
- VRR stands for variable refresh rate. What this does is sync the refresh rate of your display to the framerate of the game, thus eliminating screen tearing but with a lower input lag penalty compared to vsync.
- Enhanced Audio Return Channel (eARC) is the next generation of ARC. The main benefit of eARC is a big boost in bandwidth and speed. This allows you to send higher-quality audio from your TV to a soundbar or AV receiver. There’s scope for eARC to deliver up to 32 channels of audio, including eight-channel, 24bit/192kHz uncompressed data streams at speeds of up to 38Mbps. This means all those high bitrate formats currently available on Blu-ray discs, 4K Blu-rays and some streaming services – Dolby TrueHD, DTS-HD Master Audio and object-based formats such as Dolby Atmos and DTS:X – will all be compatible. On paper, HDMI eARC should also make the handshake between compatible devices much smoother and negate the need to activate HDMI CEC (which doesn’t always work properly) - so operating multiple products shouldn’t require any extra steps to get things up and running.
- Auto Low-Latency Mode enables your display to go into "Game mode" automatically when connected to a device it would consider a gaming device (eg a console), thus ensuring you are in the TV mode with the lowest latency, hence the name. This is not a crucial feature and it is something you can simply do manually, by switching your TV manually into game mode (or PC/graphics mode, depending on the TV in question).
Reactions: Rentahamster, skneogaf, kyliethicc and 2 others

Will continue adding more info as it comes in, and also expanding the FAQ. If anyone wants to re-write any section let me know, I'd be happy to drop it in.

I watched the Sony thing earlier, holy shit the poor people being forced to do that were hilarious, ultra-cringe. I would like to see a more indepth comparison of the differences in the new "Pro" versions of the X-Motion Clarity and Triluminous. Also, Contrast Booster Pro for OLED, which Vincent had a video about already, its something to do with boosting the RGB subpixel's brightness as well as the white subpixels so as not to dilute the colours at higher brightness, as seen on the Panasonic GZ/HZ2000.

I can't wait to see how the new Sony image processor, XR, stacks up against the X1U, I saw nice IQ gains from X1E to X1U, so hope this is a similar or bigger jump.

I'm bummed that there won't be a proper 4K flagship LCD anymore, I will never have the space for a 75" in my current setup so that makes the 8K sets meaningless to me right now, even if I could afford them.

I see the ZD9 staying the 4K LCD master in terms of dimming capabilities/HDR contrast for a while longer, unless the new processor is a revolution, which it could very well be.
Reactions: Rikkori

Check out the youtube channel HDTV Test for detailed videos covering all the new 2021 TVs.

Here's ones he did for Samsung and Sony:

In 2021, LG Electronics will launch G1 (successor to GX) with a brighter 4K 'OLED evo' panel. It is described as "next-generation OLED technology" with 20% improved efficiency by manufacturing arm LG Display.

The company will also launch new 77 and 88-inch 8K OLED TVs in the form of Z1 (successor to ZX). There are even hints to a cheaper A1 range of OLED TVs. Although it was not part of LG's press announcement, the company makes reference to it in its footnotes saying that the new 'Gallery' floor stand is "ideally suited for 55/65-inch G1, C1, A1 series models". That is an intriguing clue as it may indicate that the company is planning to bring OLED truly mainstream this year. We are chasing details.

The footnotes also make mention of B1, which is the successor to BX. The B series usually has most of the same features as the C series but a less powerful video processor, presumably Alpha 7 Gen4.

The Gallery stand is optional and sold separately, the company said.
Click to expand... And hints of a cheaper A1 OLED range 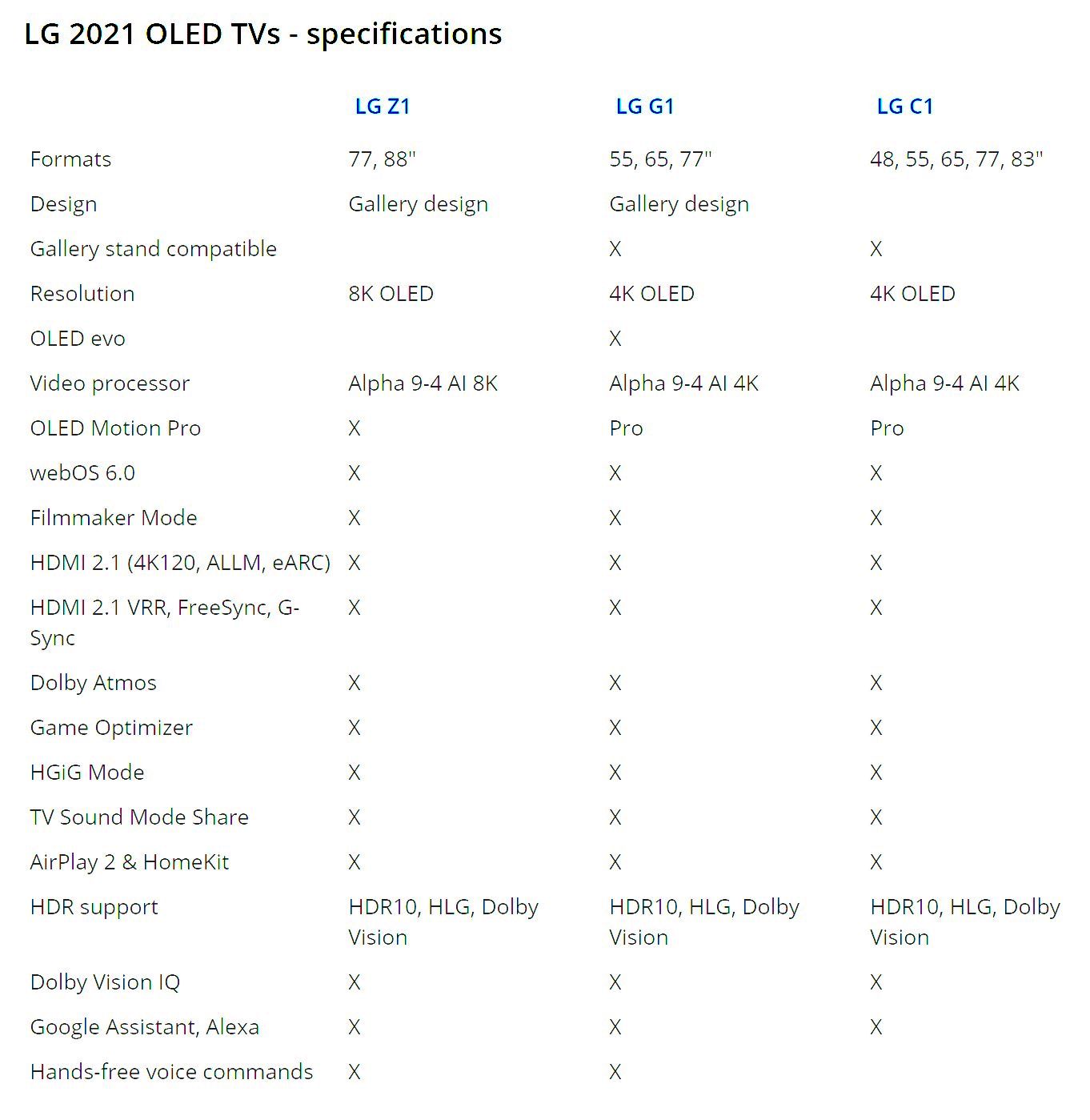 As announced before CES 2021, LG will add new technology to its top LCD TVs. The combination of "a new advanced LCD panel structure that combines Quantum NanoCell color technology with mini LED backlighting" equals "QNED miniLED", according to LG.

"QNED" LCD TVs will compete head-to-head with Samsung's top LCD TVs that in 2021 will be known as "Neo QLED". Neither of the two represent a new display technology. Instead, these are LCD TVs with more a advanced LED backlight for less crude brightness control in up to a few thousand dimming zones. It is still a far cry from the millions of self-emitting pixels in OLED, which still represent LG's best TVs of 2021.
Click to expand... Looking forward to seeing Sony pricing and release dates for their TV's.

I'm seriously considering renovation to allow such big a big tv to purchased.

Either that or move to a house with the room for one.

Big screen is life so the bigger the better life is is.

I still not ready to get a proper Bravia 'PS5 ready' TV. Will be getting a Bravia 4k 43inch instead. Maybe in the future.

First look at Samsung miniled! It's in German but not to worry it has plenty of pictures

And hints of a cheaper A1 OLED range

FOMO is a youtube clickbaiter and clueless, so I wouldn't trust him on anything other than maybe golfing attire. We'll have to see how the new LG LCDs fare but certainly LG has had a bad reputation on the TV LCD side.

Rikkori said:
FOMO is a youtube clickbaiter and clueless, so I wouldn't trust him on anything other than maybe golfing attire. We'll have to see how the new LG LCDs fare but certainly LG has had a bad reputation on the TV LCD side.
Click to expand...

What he essentially says is that it’s mostly a rehash of current technology and different than what Samsung has been working on and intending to call QNED.

Waiting to see what Panasonic have in the works. The EX750 I got is still hanging in there (and is pretty much the last 3D 4K set) so will probably upgrade to something more up to date they showcase this year

TKOFromTokyo said:
What he essentially says is that it’s mostly a rehash of current technology and different than what Samsung has been working on and intending to call QNED.
Click to expand...

Lg's mini led won't be any good. Samsung's should be easily the best lcd on the market.

If I wasn't a Sony processing purist and I didn't want oled i'd definitely choose the samsung Q90A this year.
A

Waiting for reviews on everything. My B7 OLED is due an upgrade, looking for something bigger than the 65” too.

Samsung's high-end 2021 TVs are available for pre-order in the US now and will start shipping in March. 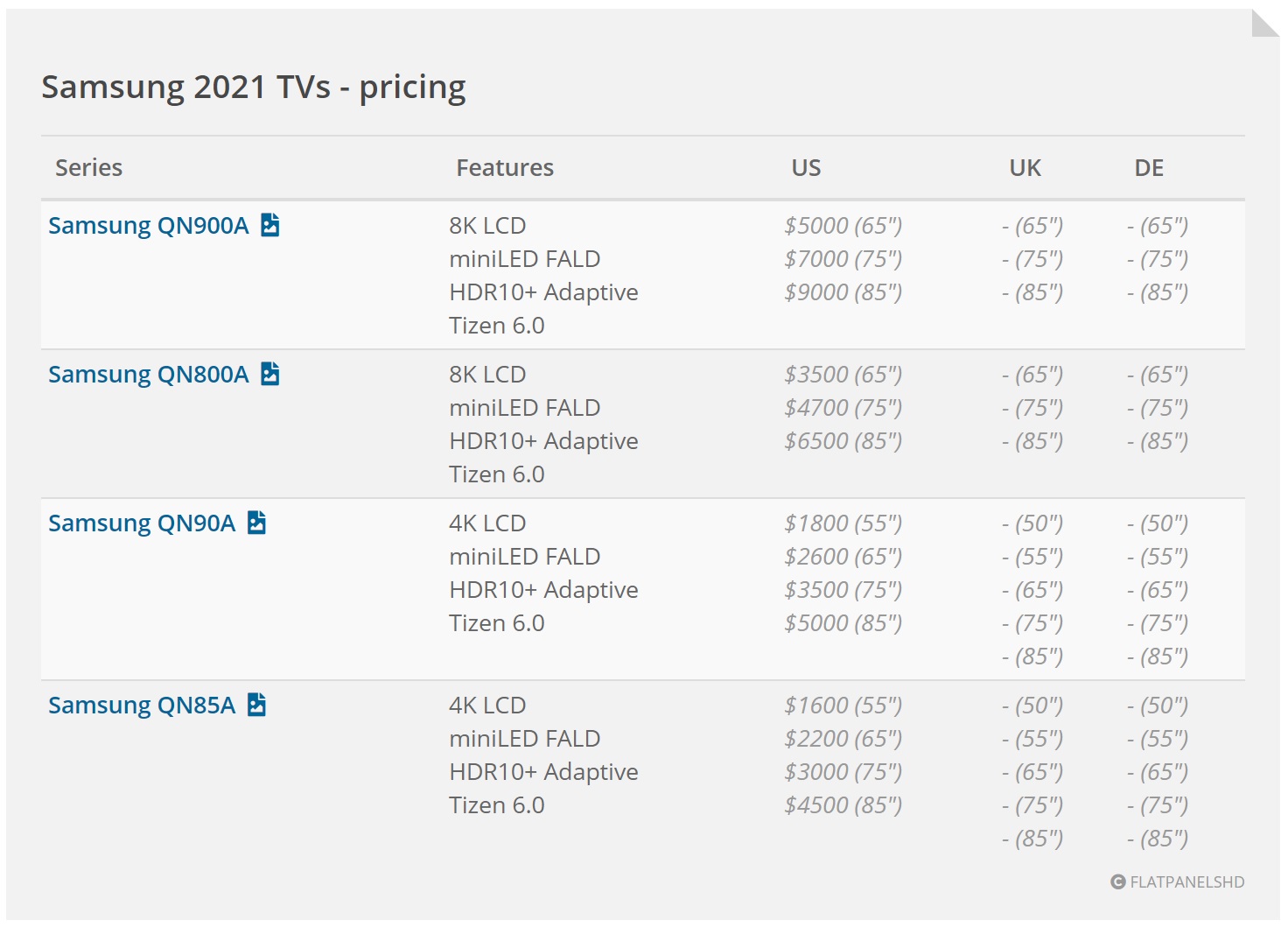 8K will cost a little less, 4K roughly the same or a little more 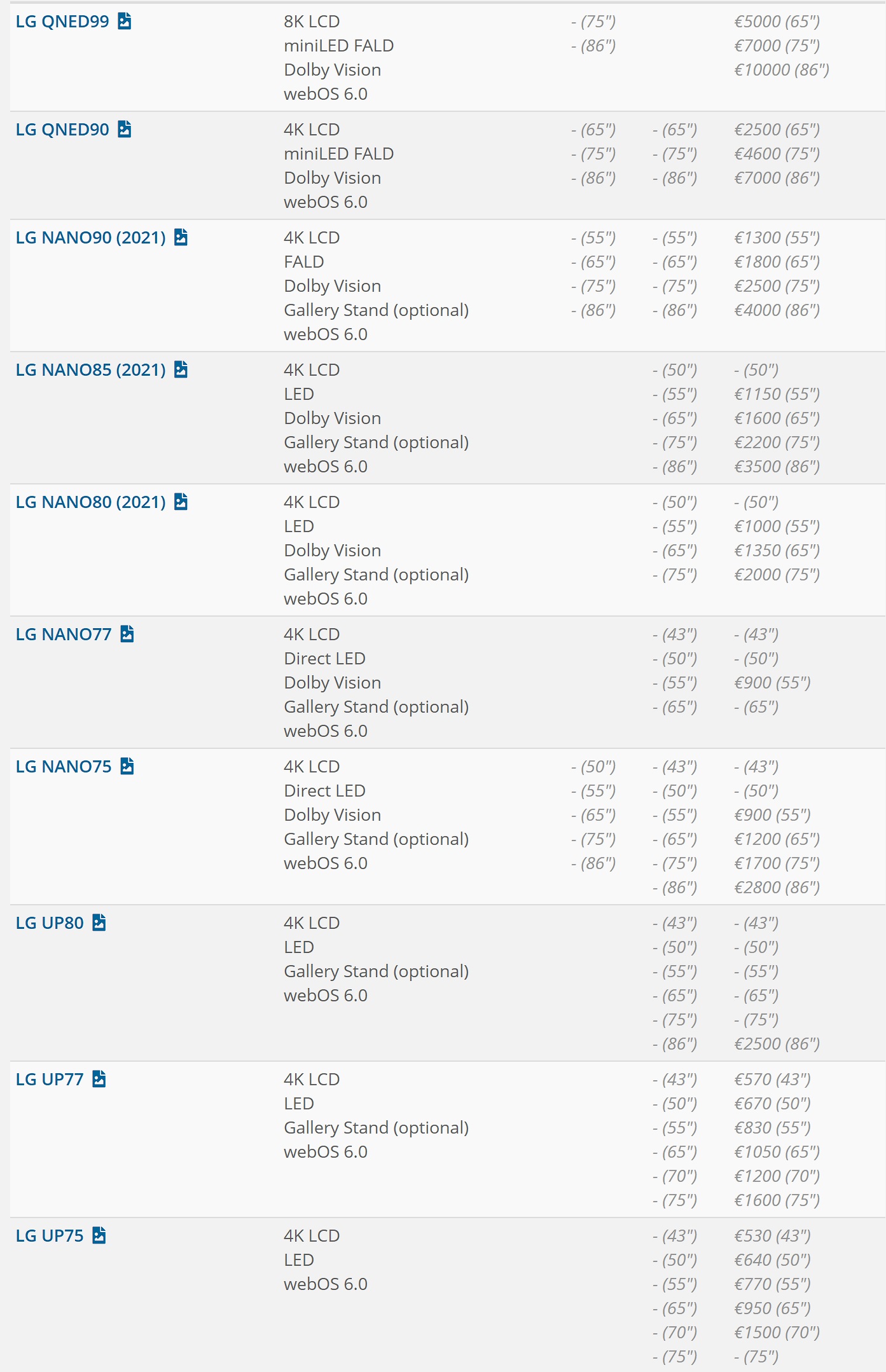 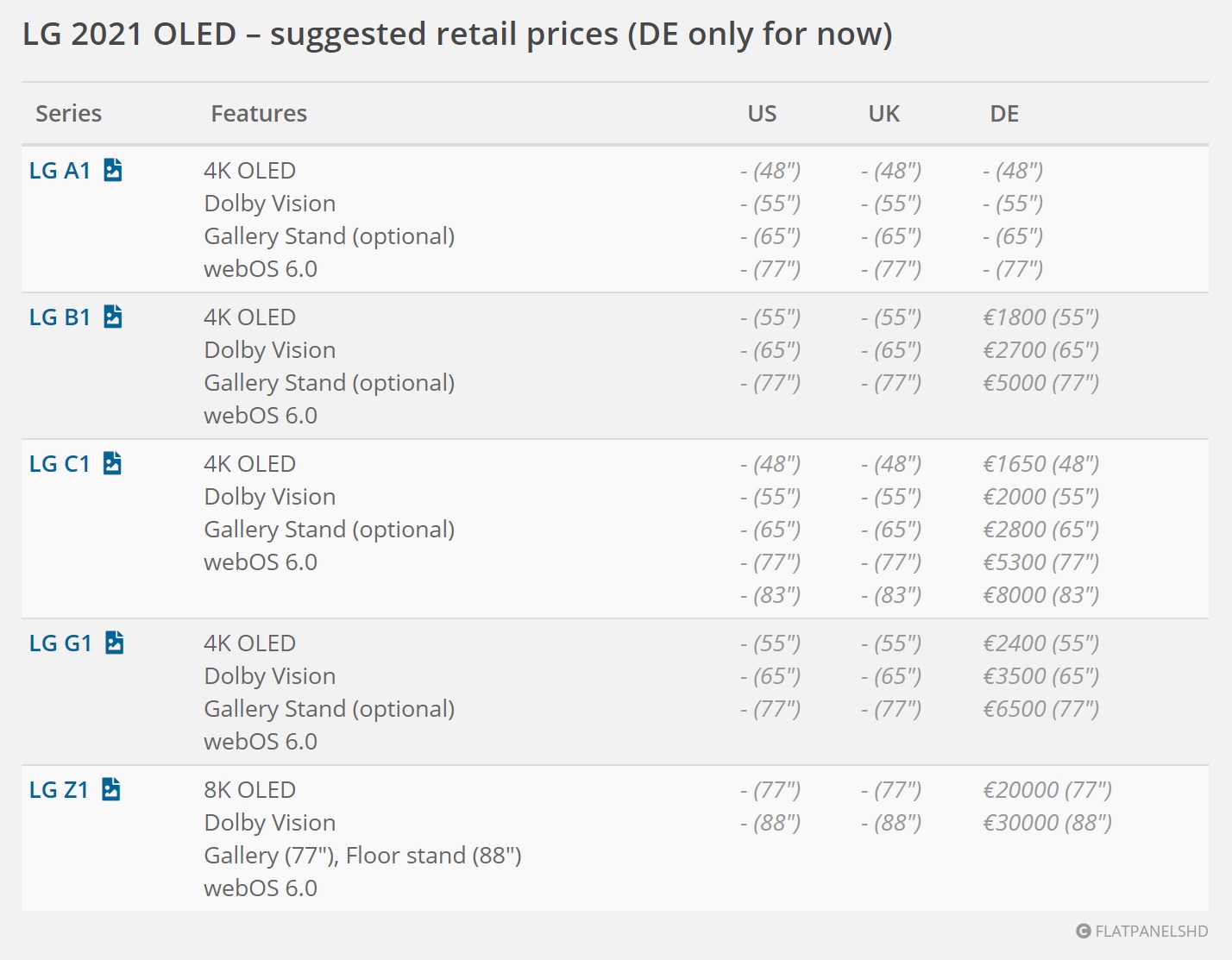 LG G1 with the brighter OLED panel starts at 2400 Euro It comes with Android 10 pre-installed

Look at this! Fucking incredible light control - 800 Dim. Zones ftw. This is going to be the ultimate gamer's TV. 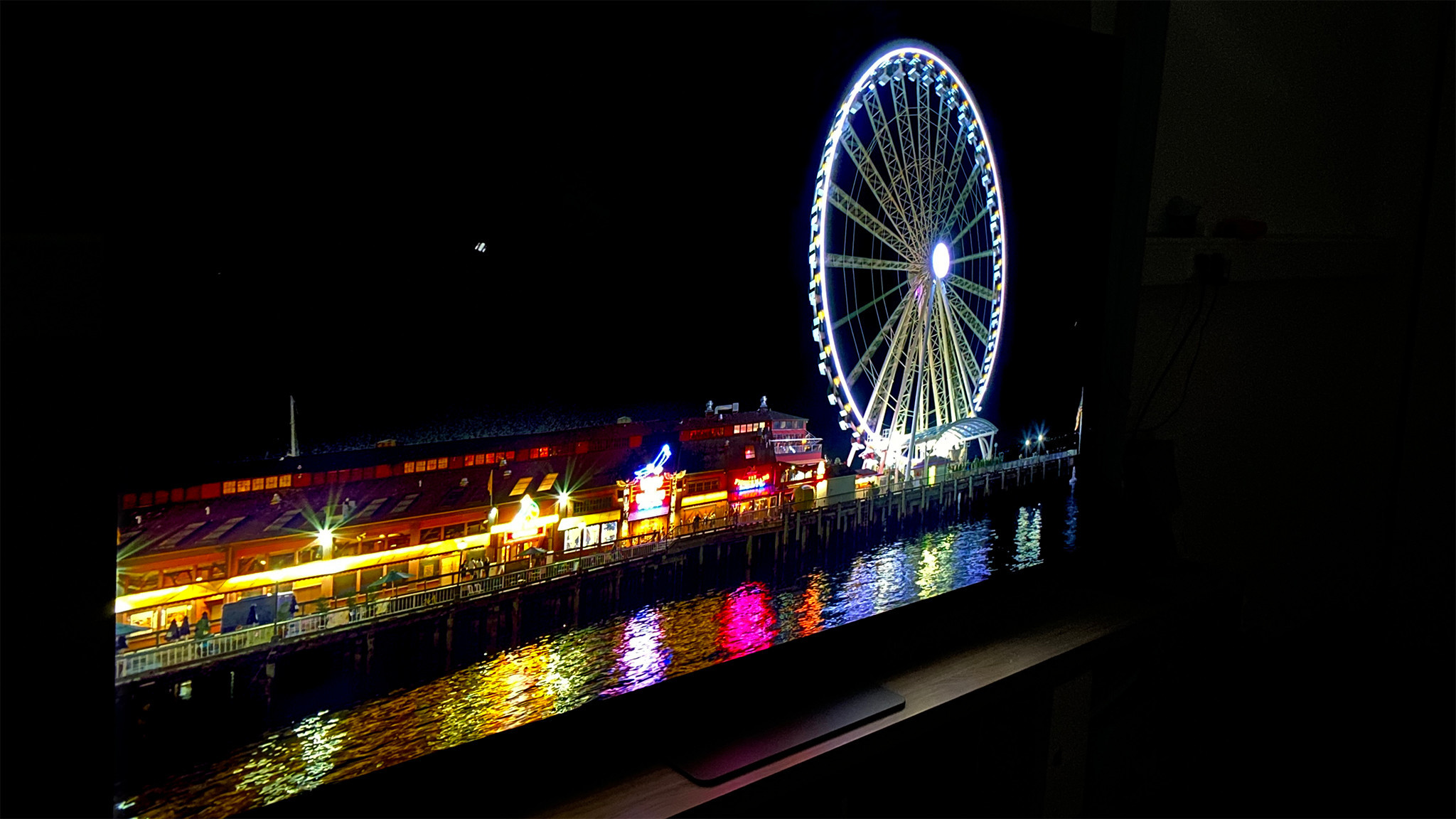 IF everything works the way it should (i.e : no fake 4K@120Hz, no DV problems like the previous Philips model etc) i think that it will be a best bang for your buck thing/set.
Looking forward to the reviews

But yeah, the Q90A will be the best lcd this year. If I read your chart right rikkori, 1800 for the 55inch is not a bad price at all though. On black Friday it'll be a steal. For the price it can't be beat, though if money is no object the A90J is the ultimate gaming AND movie tv. If uniformity is greatly improved on samsung this year I would prefer it over lg g1 evo oled since I think it's cheaper. For the cheapest movie enthusiast option in the US it'll be the A80J oled.
Last edited: Feb 9, 2021

sony just updated the x900h with atc 3.0 last night.
You must log in or register to reply here.