I stumble into this just now. Was a cross platform analogue controller release only in japan in 1989. A few Mega Drive/Genesis games are compatible. Looks like the devil controller.

The XE-1 AP is an unusual analogue controller manufactured by Dempa. It is compatible with the Sega Mega Drive, but also with a number of other Japanese consoles and computers (some require extra adapters). The device was not released outside of Japan, though is revolutionary in many ways due to the fact it was released in 1989 - nearly a decade before analogue features of this nature became mainstream.

The controller has ten face buttons, four shoulder buttons, an analogue stick and an analogue slider (which can be rotated to suit the user). Many of these buttons exist as switches to maintain compatibility with the computers the controller supports. Others are turbo switches, or are simply not used in the majority of circumstances. There is also a switch to turn the controller back to "digital mode", allowing it to remain compatible with all games on each system (aside from computer games that do not support joysticks).
Click to expand... 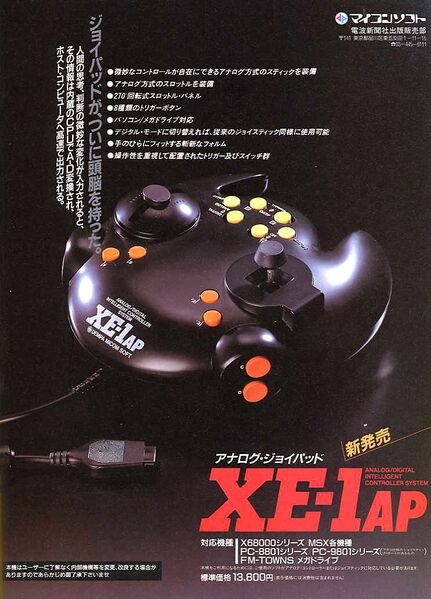 This thing is ugly.
R

This controller makes my head hurt and my hands sweat
Y

It may be a bit ugly, but I would love to try it out.
A

Love these strange forgotten peripherals. Looks pretty interesting. I wonder if it inspired, in some small way, the Nights controller for Saturn...
X

Sega does what Nintendon't?
D

Remember this from the back of the the Japanese Afterburner II manual.
C

I've thought about buying one a few times just to see what it's like.

Apparently some games had support stripped out in their non-JP versions.
N

Reminded me of this: If sega did then yes. But sega didn't so they don't do what Nintendoesn't at the same time.

Yeah, this thing is really, really cool. I definitely want one sometime, it'd be awesome!


In addition though, with the XHE-3 adapter, this gamepad, or the Sharp/Micomsoft Cyber-Stick joystick which it is a gamepad adaptation of, also work with the TurboGrafx-16 (PC Engine). It's a regular PCE port on the end of that adapter, but it'd work on a US TG16 too via a PCE-to-TG16 controller adapter. Unfortunately the XHE-3 is apparently rare and valuable, which is too bad, because the games look awesome in analog...

TG16 and TGCD (PCE 16/CD) games which support analog this way
--
Outrun (HuCard)
After Burner II (HuCard)
Forgotten Worlds (Super CD; did get a US release, unlike the other games)
Operation Wolf (HuCard)
Thunder Blade (HuCard)

http://www.youtube.com/watch?v=y0KC5DeMbZU - video of all five games being played on a Cyber-Stick.

It is also known to NOT work with Space Harrier (HuCard) or Battle Ace (SuperGrafx), among others; those five above seem to be it. These controllers do also work with a bunch of games on some Japanese computers of course, but for console games, the listed Genesis, Sega CD, 32X, and Turbografx games are it.
You must log in or register to reply here.