Strange fact, I've never seen the original blade runner. But I feel in love with 2049 so much that when so that when I bought a copy of the final cut I couldn't bring myself to watch it out of the fear that it may change my perception of a film I hold dear.

It's pretty clear that there is extremely unlikely going to be a third film after the poor commercial success of 2049, despite the good reviews and press. But having seen what Insomniac has done with Spider Man, taking a well known IP and making their own interpretation, I feel there is no better master at the art of story telling and emotional narrative to be up to the task than Naughty Dog.

I know there's more media for me to discover here but I would love to see their vision of this franchise. It just feels too big to die. The question is, do we pick up with K assuming that's he's not dead to help the uprising? Or do we find ourselves in the story of another character somewhere else?
Reactions: Sleepydays, Guynamedbilly, Solarstrike and 17 others
O

No.
Reactions: EL BABE, Zannegan, TheGreatYosh and 46 others
S

Fuck no.
Reactions: EL BABE, Zannegan, TheGreatYosh and 29 others
B

Uhh naw
Not with Druckman overseeing it
Reactions: Zannegan, TheGreatYosh, Camreezie and 22 others

No. Not even if a different developer took it.
Reactions: Griffon, Roman Empire, DaveMorris and 1 other person

I (unpopularly apparently) think this would work very well. Would also love to see the ND artists tackle that cyberpunk style. Would love to do some replicant testing interviews!
Last edited: May 23, 2020
Reactions: Lawrence ‘Chunk’ Cohen, Devilich, blly155 and 3 others

No. They should continue support on TLOU2 and carefully think their next steps because right now they they are unwanted.
Reactions: SuperLupeRap, Griffon, Denjo92 and 5 others

AAA game set in the Blade Runner universe would be pretty sick.

Not sure if Naughty Dog specifically would be an ideal fit for the IP, but I would be open to it for sure, as I'm a huge Blade Runner fan.
Last edited: May 23, 2020
Reactions: Gashtronomy, Lloyd22, King Harkinian and 2 others

No.
The Westwood PC game is good enough.
Also, 2049 is a piece of shit.
Reactions: michaelius, jadefire66, King Harkinian and 6 others

Keep them the fuck away from Blade Runner.
Reactions: Stimpak, Zannegan, Sleepydays and 15 others

FF:Enhanced_Reality said:
But I feel in love with 2049 so much that when so that when I bought a copy of the final cut I couldn't bring myself to watch it out of the fear that it may change my perception of a film I hold dear.
Click to expand...
Just watch it. Blade Runner is a much, much, much, MUCH better film than 2049, which looks the part but it can't hold a candle to the original.
Reactions: wipeout364, ZeroZeroQuatre, Griffon and 12 others

2049 is awful. Wannabe sci-fi dreck with computer graphic effects (!) and totally misses the point of the original. And no Vangelis score.
Reactions: jadefire66, ZeroZeroQuatre, Griffon and 7 others

NOPE lol I mean come on OP, are you baiting us?
Reactions: Stimpak, wyvern_bloodfist, DaveMorris and 1 other person

ND should stay away from movies. their games are essentially mediocre movies, with an occasional button press, as it is
Reactions: Sleepydays, wyvern_bloodfist, spandexmonkey and 5 others

If Neil Druckman were to leave Naughty Dog, it would be picked up by the initiative and we would see a lot of meltdowns.

on topic
I would like them to pick the order franchise. but the timeline would be on the 80’s.
but ultimately I am down with whatever story they want to tell with any kind of chararacters they want to portray. I do not see them going back to platformers or kiddy racing games ever again.
Last edited: May 23, 2020
Reactions: wyvern_bloodfist

Arkam said:
I (unpopularly apparently) think this would work very well. Would also love to see the ND artists tackle that cyberpunk style. Would love to do some replicant testing interviews!
Click to expand...
Me too. Naughty Dog + the cyberpunk theme would mesh very well I bet

Not interested in ND's take on blade runner at all.
Reactions: Sleepydays, wyvern_bloodfist, DaveMorris and 2 others

Matsuchezz said:
If Neil Druckman were to leave Naughty Dog, it would be picked up by the initiative and we would see a lot of meltdowns.
Click to expand...
Meltdowns from Xbox fans? I agree.
Reactions: Matsuchezz
Y

2049 was brilliant, the original is just about better for nailing the neo noir theme properly but damn the visual design and direction of 2049 is just amazing. Also, if you want more from the Blade Runner universe then of course you should check out the original and then check out the in between stories that fill in some of the side events that take place after the original but are mentioned in 2049...

But I'd like to see a futuristic fantasy -even if not cyberpunk- IP from them. I remember when Savage Starlight appeared on their website, they could do something great with that.

But please, give it a unique, personal touch as ND did with the Indiana Jones/Tomb Raider setting and the post-apocalyptic zombies setting.
Reactions: Hobbygaming

If they weren't doing Cyberpunk 2077 I would have suggested CDProjektRed tackle it. Another developer I'd consider (since they're owned by Warner Bros. themselves who released the movie) is Rocksteady. I'd like to see them tackle Blade Runner after Batman.

Keep Neil Druckmann's filthy NPC hands away from this property. A lot of SJWs had complaints about 2049 so I don't want a scenario where a cucked developer gives in to their demands.
Last edited: May 23, 2020
Reactions: Sleepydays, Bonfires Down, CyRuZ and 2 others

Yoko Taro? yes Yoko Taro, I mean the guy made game about replicants before, his perfect for this. 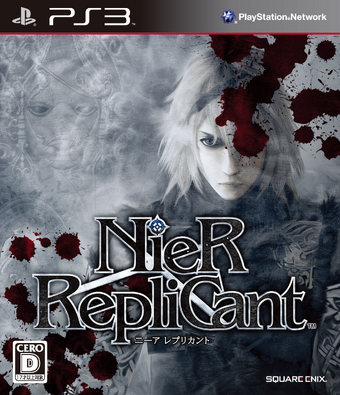 I don't want anything Cuckmann is involved in.
Last edited: May 23, 2020
Reactions: Sleepydays, Hobbygaming and CyRuZ

Lol fuck no . A cyberpunk in Druckmanns “ideal world” would be a terrible thing to see
Reactions: SuperLupeRap, Sleepydays, NahaNago and 2 others

Blade Runner is strictly a film made to take advantage of the film medium, so I don't know why Naughty Dog would try to ape...oh wait, never mind. But I agree with everyone else. Naughty Dog aren't talented enough to make a Blade Runner game that would do justice to the original film. They would be fools for even attempting to do so.

A Naughty Dog Cyberpunk game would be interesting though.
Last edited: May 23, 2020
Reactions: Sleepydays, Rikkori and Hobbygaming

i rather chug a gallon of soy and watch the OG blade runner instead thanks
Reactions: Sleepydays and hariseldon

brian0057 said:
No.
The Westwood PC game is good enough.
Also, 2049 is a piece of shit.
Click to expand...
The Westwood Bladerunner game is the perfect Bladerunner game. I’m not sure you could make that game today and I have my concerns about the remake - I worry that modern commercial subsidies will ruin it.

As for 2049, to me it just seemed to be a nostalgia cash in, it did nothing for me. The original is a work of art and the OP should watch it.
Reactions: jadefire66, Terenty, brian0057 and 1 other person

Watched the original recently, that end part is still so haunting and well shot.

At this point people
Should just stop making threads with anything to do with naughty dog. You don’t get a discussion, just a slew of predictable replies regarding druckmann etc.
Reactions: Hobbygaming, Somnium and Reficul

Why would you even put that nightmarish thought in our heads.
Reactions: Sleepydays, NahaNago and Hobbygaming

Badbreezy said:
Uhh naw
Not with Druckman overseeing it
Click to expand...
I was about to say hell yeah, they are the ones who would be up to the task, but I forgot about that dick who will ruin everything he touches. ND better stays away from already established, renowned franchises, if they want to ruin something it better be their own work.
Reactions: Sleepydays, NahaNago, Hobbygaming and 1 other person

Why and why them?

Well, it's an opinion, I guess.

We can see who made the less feminine npc between them and outer worlds from obsidian...
Last edited: May 23, 2020

I'm up for quarantining this developer to franchises I tried to like but never will. In that way, I don't have to play their games.
Reactions: Closer, Hobbygaming and CyRuZ

V2Tommy said:
2049 is awful. Wannabe sci-fi dreck with computer graphic effects (!) and totally misses the point of the original. And no Vangelis score.
Click to expand...
2049 is a very good film deeply let down by the fact that Ridley Scott made it so tied to the original when Denis Villeneuve wanted something more independent. The writer for the first film again contributed to 2049 so there was consistency at the cost of 2049 being treated as it's own film. 2049 isn't perfect by any means but neither was the original which was mainly elevated by the Vangelis score and Rutgear's amazing monologue at the end. Anyway, what are you talking about when you say it missed the point of the original?

FF:Enhanced_Reality , you miss a lot of context in 2049 by not watching the original film. Watch that film first and then check out 2049 again.

- Naughty Dog don’t deal with non-mainstream, and BR is as niche cult movie as it gets.

- Why would you want them to cheapen the style and narrative of the originals? They aren’t subtle in their narrative.

- What kind of gameplay do you expect out of them that does justice to this franchise?

- Ask yourself: could current ND make a game that would inspire something like Blade Runner? If not, why do you think they could do the opposite? And no, this exercise isn’t stupid because in its current state, ND makes games that are half movies already.
Reactions: Sleepydays

Westwood already did it much better than Druckmann ever will.


You can now get this on GOG btw. Bless them.
Last edited: May 23, 2020
Reactions: jadefire66, Sleepydays, Rikkori and 2 others

The Hamburglar said:
At this point people
Should just stop making threads with anything to do with naughty dog. You don’t get a discussion, just a slew of predictable replies regarding druckmann etc.
Click to expand...
Yeah where is the Naughty Dog hate coming from? Who is Druckman and what did he do? It's almost like posting a THQ thread on Resetera. This forum is weird sometimes.
Reactions: Strategize, Hobbygaming, Somnium and 1 other person

CD Projekt is already making it, it simply has a different name.
Reactions: Gashtronomy and Solarstrike