Ataribox (officially "Project Ataribox") is an upcoming home video game console produced by Atari, SA. The system was first revealed in June 2017. It is expected to be released in Q2 2018.

Connect, Game, Stream Like Never Before
Killer Retro Games. Hot New Indie Titles. Open Linux OS.
Connect & Stream even more
Click to expand...
We were going to wait for launch to show you the Ataribox Joystick, but we like it way too much to wait. What do you think?
Click to expand...
Controller 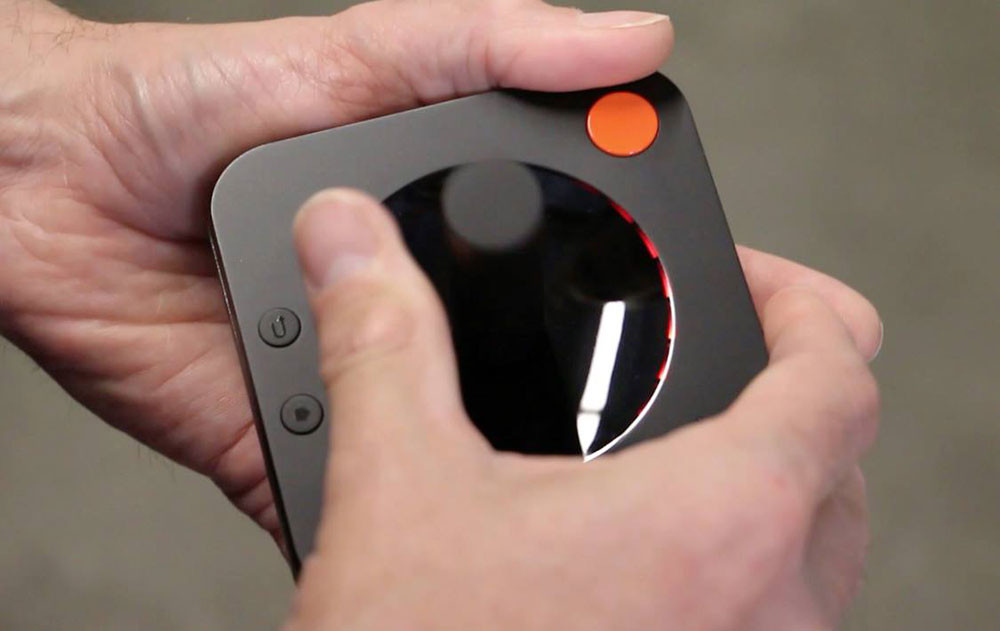 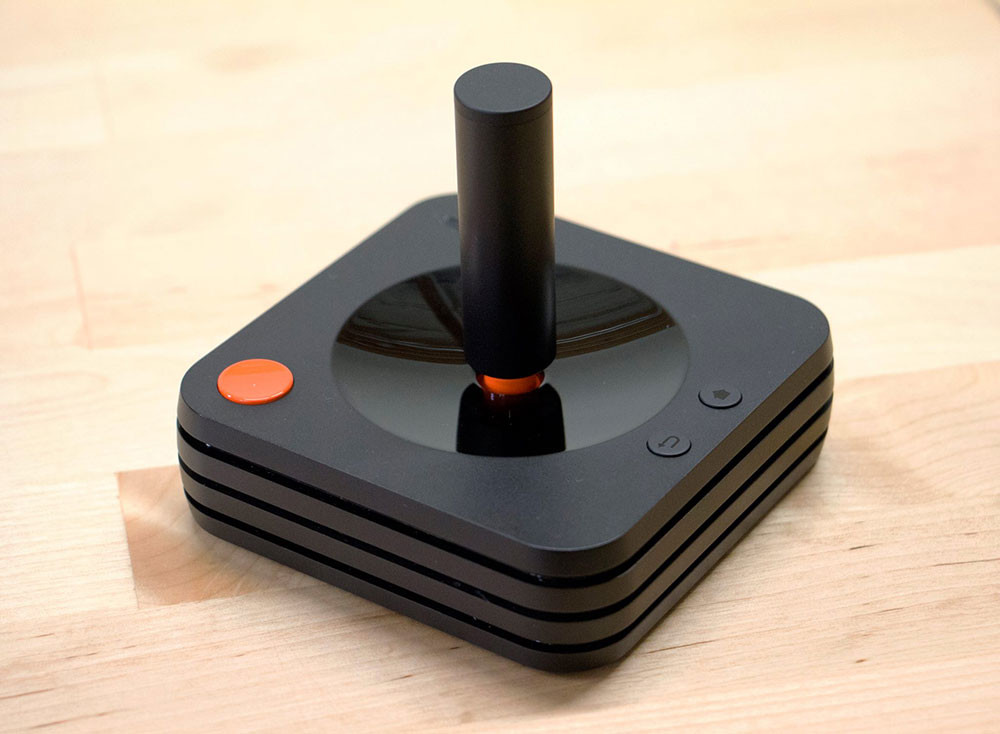 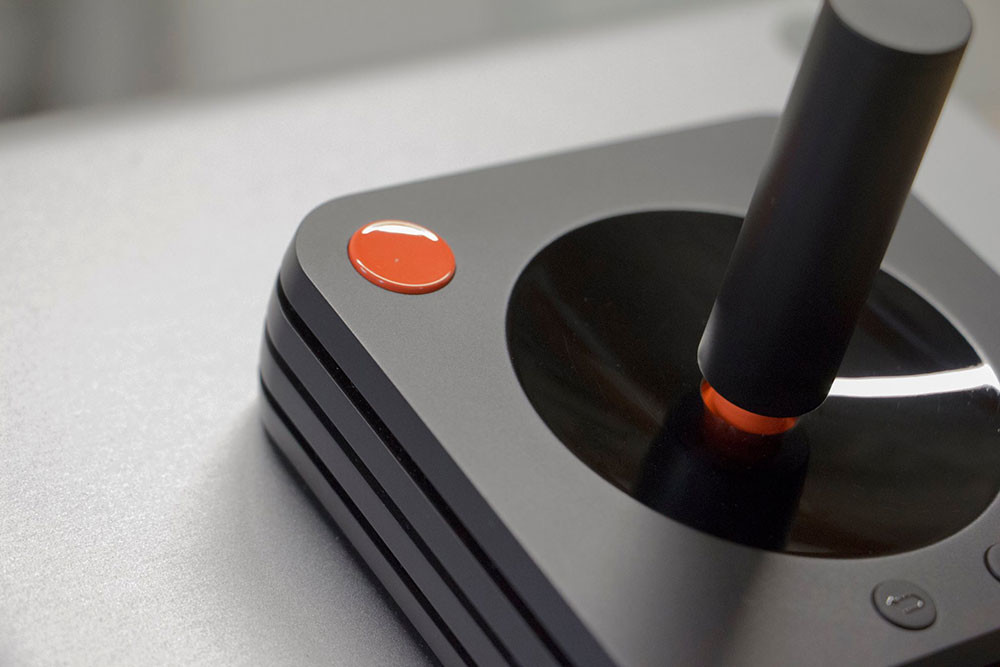 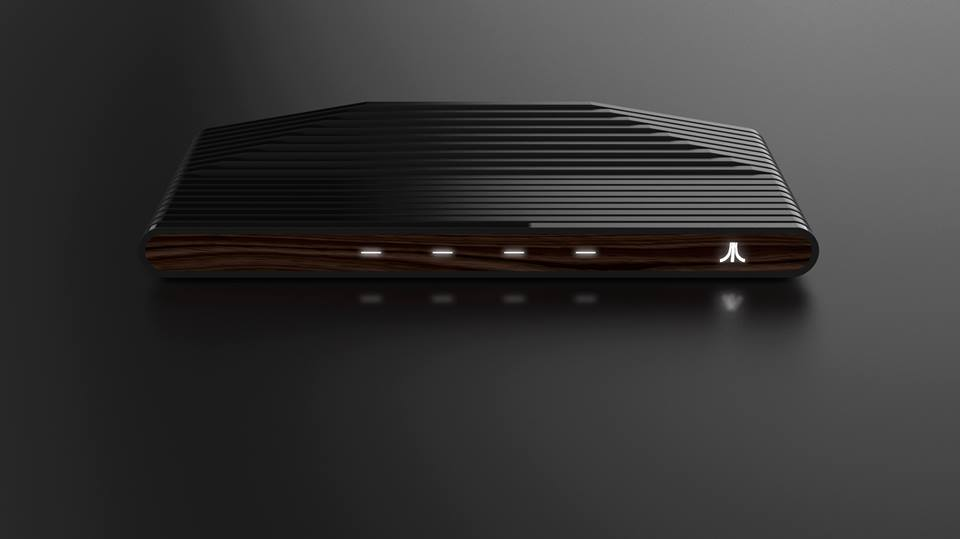 Does it light up based on the direction pressed?

not sure which direction the Ataribox is going to go: never coming out or tanking at retail.

I like how sleek it looks, but I have no idea who the target audience is for this. With a design like that, it's clearly not the modern gamer.

It can't play modern games like that, and Atari games just don't hold up well, so I have no idea what the thinking here is.

It sounds like an Ouya with a bigger brand name.

In the hard drive somewhere

Xaero Gravity said:
I like how sleek it looks, but I have no idea who the target audience is for this.
Click to expand...
it's basically a hail mary. hoping to tap into the nes/snes classic "market" with the feature of "new games"... hodgepodge of ideas that most likely won't work but they have rights to the brand so may as well take a stab at it, is what i guess their motivation is

Is that a rotary joystick? Maybe it could be used to play Ikari Warriors or Midnight Resistance. Where is the second button?

Why try to "modernize" at all? It just comes off as poor design and cheap. Should've just made an exact replica of the original, like Nintendo did. Same for the console.
A

cool sleek design just like the console, but too bad this thing will prob fail hard.
T

Yeah, definitely looks "cool" but like they still haven't come up with a good use case for this. You're not going to play anything other than old Atari games with that kind of controller.

It's a nice-looking joystick. The design resembles a modernized and updated version of Atari's model CX-40, which was the standard pack-in joystick for the Atari 2600 for many years. While that type of controller was adequate for a large number of games from the early 2600 era, it wasn't too long afterward until we saw games on more advanced systems that demanded more buttons. These systems included Intellivision, ColecoVision, Vectrex, and even Atari's later systems like the 5200 and 7800. This design looks like it might have an analog stick (the CX-40 was purely digital), so I that would be a good thing, but it could have still stood to use at least one or two more action buttons.

My hope is that this controller is purely intended for "retro" classics, and that they might have another controller for games that require more sophisticated controls.

Looks like a PS Pro with a hardon.
K

Hopefully, I can just use a Genesis controller.

This entire project looks more like a deviantart 3d project than something serious.

The joystick looks really nice to me except for that button. That button looks like it would be really horrible. The original Atari button sat up more and had a deeper concave design.

The minimalist crowd is going to love the shit out of this.

NoKisum said:
It sounds like an Ouya with a bigger brand name.
Click to expand...
I still use my Ouya.

Somewhat ironically for this thread, mostly to play Atari 2600 games.

So I guess I might be the target audience for this.

theHFIC said:
not sure which direction the Ataribox is going to go: never coming out or tanking at retail.
Click to expand...
Pretty sure this thing never sees the light of day. It's a crowd funded console, and that's a bad start. Another problem is what games do they want it to play? Modern and old? Well, your PC can already do that.

I keep hearing these people say how they want it to play Jaguar games. Digital versions, I guess. People seem to forget that thanks to licensing agreements, the few decent Jaguar games are a no go. Probably the only good one Atari could re-release is Tempest 2000.

It's the same crap with these nuts who want a Dreamcast 2 with downloadable digital versions of Soul Calibur and NFL2K1...but I digress.
U

DiscoJer said:
I still use my Ouya.

Somewhat ironically for this thread, mostly to play Atari 2600 games.

So I guess I might be the target audience for this.
Click to expand...
Well yk what, I think this console is the perfect thing for someone like you.

I can't wait to play Combat and Adventure on this.
U

ReBurn said:
I can't wait to play Combat and Adventure on this.
Click to expand...
Combat's gonna be ill.

ReBurn said:
I can't wait to play Combat and Adventure on this.
Click to expand...
Secret Quest is where it's at!

I feel like a single button is very limiting. It was an issue on the 2600 with games so I dont know why they are going that route.

wipeout364 said:
I feel like a single button is very limiting. It was an issue on the 2600 with games so I dont know why they are going that route.
Click to expand...
They want to top ouya at suck

Besides that pretty neo controller, hopefully this box will support 4K HDR so that it can be used as a perfect kodi box with some pc gaming abilities due to linux (meaning a perfected Nvidia Shield). I wouldn't mind playing latest Civilization and other rts from my living room since i quitted pc gaming.
A

It's going to have an AMD processor / apu, yet, the controller has one button.

They should have added AtariXL combatibility, this way it could compete with NES Classic.

So is this supposed to have modernized versions of 2600 classics?

That is a sexy controller

I'm interested in the controller for novelty purposes. The console itself looks nice, but I have no use for what is essentially Yet Another Raspberry Pi.
T

Anyone who has ever used an original 2600 joystick knows how uncomfortable that damn thing was to hold and they think a modern version is a good idea? I honestly don't understand who is funding this project or why.

Shifty. said:
I'm interested in the controller for novelty purposes. The console itself looks nice, but I have no use for what is essentially Yet Another Raspberry Pi.
Click to expand...
A raspberry pi with retropie makes most of these novelty devices just more clutter, including NES mini and SNES mini. That said, these devices are fun and the novelty of them is attractive.
L

Soapbox Killer said:
One Button? In 2018?
Click to expand...
Mobile tells me people love It.

This stick cleary states that if they make new games for this thing, they will never be too ambitious.

Is the system strictly a way to play the 2600 lineup? Or is some kind of novelty for the hardcore and they will try to sell a more full featured controller down the line?
S

Gross, something something nostalgia. This better be a fucking alternative. Otherwise this console will not survive for too long in this market.
M

NoKisum said:
It sounds like an Ouya with a bigger brand name.
Click to expand...
What I was gonna say.

Oh man I dont now where to even start to think about this console, one one hand it brings me back to my youth but then again I look at the controller and see only one button in this day and Im like what!
Clearly the Atari controller is for replaying the Atari classics but if it does play modern games youll probably be able to plug in other controllers.
Im still not sure what to think about this console and thats not a good thing.
S

The controller looks really sleek to me. Id actually enjoy seeing the simplicity of one button games. I still really dont know what this system is for though.

You know, we dealt with that style controller back then only because choices were limited. That controller will be a hand-cramp monster. Poor ergonomics won't fly today. It's like the Colecovision and Intellivision Flashback systems.....I have those and by today's standards, the controllers are very uncomfortable to use for any length of time.

Besides, they use that controller and that will limit the types of games you could even put on the system. I mean, let's face it, Atari 2600 games haven't aged well at all.
You must log in or register to reply here.
Share:
Facebook Twitter Reddit Email Link
Top Bottom