Exclusive Kinect showcase for Durango with full 20 min demonstration of a guy shouting voice commands and selecting weapons by pointing at the tv.
P

You can't but sympathize with neogaf moderators at this time of the year!
F

mysteriousmage09 said:
Exclusive Kinect showcase for Durango with full 20 min demonstration of a guy shouting voice commands and selecting weapons by pointing at the tv.
Click to expand...
I look forward to seeing the Kinect gesture needed to cut that guys leg off from the reveal demo.
V

iamvin22 said:
insane isnt it lOL. its always the juniors too.
Click to expand...
Yeah, on the one hand it's really entertaining just how ridiculous some of the shit they come up with is. But on the other, it's pretty depressing.
I

Chamber said:
I can't tell who is kidding anymore with these ridiculous posts about exclusivity.
Click to expand...
This

BF4 for PS4 has never been officially announced, nor has the next gen version been shown at all, making his tweets make 100% sense. MS obviously has a deal to show it there, they probably paid good money for that, cannot have EA talk about PS4 version at all

Diablo 3, Destiny, that Capcom game have not been announced for Xbox 720, does not mean they are exclusives, they most certainly are not.

Not trying to ruin the party but it seems like hype has taken over some people here, and you might get really disappointing to see that few if no third party games are flat out exclusive, DLC exclusivity timed at best.


All this is doing is putting insane pressure on this Xbox reveal, to such a high point that it could never live up to it. The same people who are pushing these ideas are the ones that will after the event turn around and say how disappointing and shitty it all was, because there was no earth shattering "betraylaton" or "megatons" and the exclusivity is a month earlier release of the first BF4 DLC: Return to Karkand 2.0. The only exclusive title may be Respawn's game, as that has been heavily rumored, but FIFA? BF4?

I am looking forward to the event, less than 12 hours now, but i am keeping my feet on the ground here
D

We mentioned it in the UFC thread, but having ANY game at your conference doesn't automatically make it an exclusive so people need to just wait until tomorrow before claiming Armageddon for Sony. Otherwise, Watch Dogs, Destiny, and Diablo 3 are definitely PS4 exclusives if we're going by that logic. These publishers will take ANY spotlight they can get and maybe there will be some exclusive DLC or maybe one game, but the whole EA lineup being exclusive is getting a little absurd. Microsoft is giving EA a big spotlight to show off their games because it helps BOTH of them out, and whether certain things are exclusive or not can only be answered tomorrow, but BF4 would be the LAST game I'd think of as a next-gen console exclusive for MS.

They're getting even more spotlight time by being mysterious and they're probably loving it right now. EA might be showing stuff off tomorrow, but that doesn't equal exclusivity in any way.

This is getting crazy even before E3 so I can't imagine the emotions then. If Respawn's game is a timed exclusive, then that's fine as it's a risk they're willing to take and I expect some other moves similar to that possibly, but BF4 won't be if they truly want to pass COD anytime soon.

I'll only buy one console this year and the next one probably next Christmas so it's all about first-party output for me right now. Can't wait to see what both companies show off at E3 but it's a good time to be a gamer regardless. No need to enlist in the console wars and fear the worst all the time because you're only hurting your excitement for a new generation of gaming. 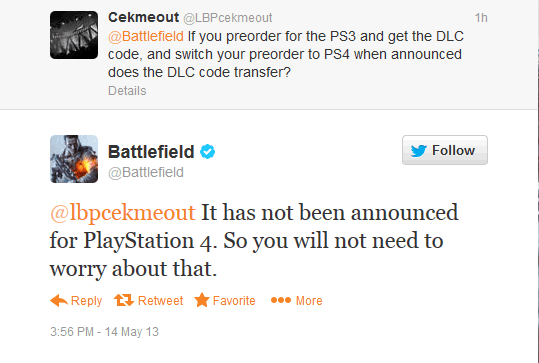 Well at least E3 is not far off.
B

You know I just remembered that the COD reveal is tomorrow. Maybe this is a BF4 footage release post (or maybe even during) the MS conference to counter that. A next gen COD compared to the next gen BF4
N

Click to expand...
Oh dear god those 2 guys. I laughed way to hard when i seeing them talking.
P

captainraincoat said:
Lets look at what has happened so far

Rumours about durangos always on.....sounds allot like a steam/origin service


No ea at ps4 reveal

Wiiu support at zero for now

Ea dropping the online passes. ...wont need them if durango has a origin like service

AND then we have ea announcing they will be showing off their aaa titles at a ms event... better start stockpiling those tissues if your a sony fan I think ms are about to pull off the biggest moneyhat ever.

Would be a pretty crappy way to go about it from a gamer point of view but ms do have the coin....may also be the reason why we saw a ps4 reveal so early as it was some sort of counter....tomorrow is gonna be good
Click to expand...
Get a grip, and stop posting nonsense please. More BS is the last thing we need here.
M 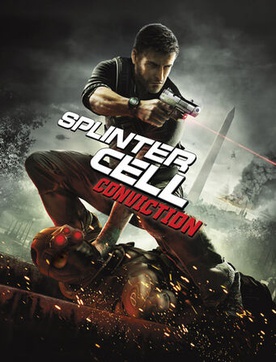 ?
Click to expand...
That's about as huge as Lost Odyssey, which is, not at all huge.
P

B.O.O.M said:
You know I just remembered that the COD reveal is tomorrow. Maybe this is a BF4 footage release post (or maybe even during) the MS conference to counter that. A next gen COD compared to the next gen BF4
Click to expand...
I would be surprised if EA and Acti would want to share the same stage. It becomes a political nightmare for MS.

Who goes first? Who has the most stage time? Who closes the show? Which one does Don Mattrick smile the most during?

In the end we really don't need two big military shooters are a console reveal. MS need to pull back from appeasing to the dudebros. Don't get me wrong I like my shooters, but variety is the spice of life.
S

Into said:
The only exclusive title may be Respawn's game, as that has been heavily rumored, but FIFA? BF4?
Click to expand...
At this stage it's beyond ridiculous really. It's hard to tell if people are being serious since the line between people's expectations and parody of them has grown faint.

EA have repeatedly talked about platforms and systems plural when referring to next gen, and their CFO has already let slip that there's a Battlefield 4 SKU (as if we didn't all know.)

Blake Jorgensen (EA CFO) said:
At the end of the day, we're very excited about Sony's platform. We think there's a huge opportunity. It's a great, as Rajat said, the technical power on the platform is going to allow us to do a substantial amount of things that we've never done before. I've seen the new Battlefield and it is stunning.
Click to expand...
W

Well I planned to buy BF4 for PC anyways but if it is exclusive it kind of sucks for a lot of my friends. Was hoping I could use the same account on PC and PS4. Share unlocks etc. Then I was gonna buy a PS4 version as well.
P

waypoetic said:
DICE still is going with "and next gen consoles". 10 hours from now they will finally have their gag removed from EA and then they can go "PC, PS3, X360, PS4, Xbox ____".
Click to expand...
They'll hardly do that at the Nextbox reveal tho. And I'm not sure it'd make MS very happy if they, right after the event whent out and confirmed PS4, maybe a day or two after?