Cartoon Network. The WarnerMedia-owned cable network has a long history of hosting some of the most iconic and well received animated series on television from the superpowered kindergarteners of The Powerpuff Girls, to suburban adventures of Ed Edd n' Eddy, the creepy atmosphere of Courage The Cowardly Dog, the youthful rebellion of the Kids Next Door, and the wacky fantasy adventures with Finn and Jake in Adventure Time. But over the years, Cartoon Network had struggled to find an identity in the everchanging TV landscape. One such example started in 2009. Cartoon Network's status as an animation network first and foremost is in a lot of ways, a double edged sword. Animation by nature is expensive and time consuming, and that often means the network is forced to rely mostly on reruns (particularly of a popular, cheap-to-produce series like Johnny Test or Teen Titans Go!) And television industry was suffering the effects of the great recession in the US, which resulted in networks relying on cheaper-to-make shows in the meantime. On top of this, Nickelodeon and Disney Channel were experiencing newfound success with star-driven live-action tween sitcoms such as iCarly and Hannah Montana, which were dominating ratings charts among kids.

There's also the stigma TV animation has in the US, where cartoons are seen as either silly adventures for 7 year old boys, or raunchy adult comedies for 23 year old stoners. CN was feeling the pressure from all around it, and the channel need to go through some drastic changes to survive. Those changes came in June of 2009, when Cartoon Network debuted a new block of live-action reality shows dubbed "CN Real". It ran initially on Wednesdays and Saturdays, and eventually just Wednesdays for most of 2009. While CN had experimented with Live-action programing before, such as reruns of the 90s Goosebumps series, and the short-lived live-action/animated sitcom Out of Jimmy's Head, CN Real was Cartoon Network's biggest push into the format yet. Strategically, it was a way for the channel to provide new content to viewers at a quicker pace, while also diversifying its lineup to cater to wider ranges of kids, and even keep viewers for a little while longer after they supposedly outgrow cartoons... IT... FAILED... HARD!!!


CN Real was one of the most universally disliked programing initiatives in all of television, and to this day, remains the darkest mark on CN's reputation. A lot of the backlash stems from two reasons.

1.) The trend of cable networks deviating from their specific purposes had gotten way out of hand by 2008. MTV had long since abandoned anything related to music, G4 was now this weird Spike TV knock-off instead of a gaming network, The Learning Channel (TLC) no longer had anything of educational value, Disney Channel no longer had much of anything to do with Disney beyond its name and parent company, and Animal Planet focused less on actual animals, and more on made up myths and urban legends of mermaids and unicorns. So a lot of animation fans hated to see Cartoon Network fall down the same road, especially when the network had mostly resisted this temptation in the past.

2.) The core problem with CN Real was that all the shows on the block, were just reality shows, which had infested every cable channel ad nauseum by this point. Not just that, nearly all the shows were just aped from whatever popular live-action/reality show is on adult networks.

* The Othersiders is Ghost Hunters for Kids
* Brain Rush is Cash Cab on a Rollercoaster
* Dude, What Would Happen is Mythbusters with obnoxious skater lingo
* Bobbie Says is AFV narrated by a pip-squeak
* Survive This! is just a Canadian Survivor (which itself, had already overstayed its welcome by this point) 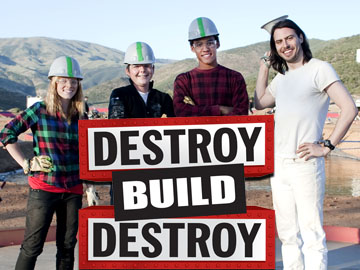 The only show that had any semblance of originality, was the Junkyard Wars-esque Construction Game Show Destroy Build Destroy, hosted by Andrew W.K. The premise is that two teams of teens build the most elaborate contraptions they can from the remains of destroyed set pieces, and the team in the lead has the opportunity to destroy the enemy team's project, forcing them to make up for lost time. Honestly it's a rather unique idea, and for a kids game show, it's actually not half-bad... It just had no business being on Cartoon Network.

CN Real was discontinued by the end of 2009, with only Dude What Would Happen and Destroy Build Destroy surviving for another few seasons until their cancelations in 2011. But that didn't mark the end of Live-Action on Cartoon Network. The network re-oriented its live-action strategy significantly after the debacle. Opting to instead take a less-is-more approach by focusing a limited number of whimsical/fantasy based series such as the hour-long dramas Unnatural History and Tower Prep, the comedic action-adventure series Level Up, and the zany sketch comedy series Incredible Crew, while refocusing the network back on primarily animated series such as Adventure Time and Regular Show. Still, the poor implementation of CN Real had damaged the reputation of Live-Action shows on the network, and all of these future series were cancelled after only a season.

CN backed off from all live-action for a few years afterward, until 2021, when it was announced that the sitcom Family Mash-Up would air on both HBO Max and Cartoon Network, with a few other live-action projects in development. While I disliked the way Cartoon Network handled live-action, I actually think they could've made it work provided that

A. The Shows were good

B. Were whimsical or surreal enough to fit in with the animated shows

C. Were limited to no more than 2 shows running at once. It's CARTOON Newtork, so cartoons should be the majority of the lineup.

Cable channels branching out from their stated purpose doesn't necessarily have to be a bad thing, there's both a right and wrong way to do it. Even when MTV pulled back on music videos, the channel for a while at least, was still generally music-focused first and foremost, and they still put out some pretty entertaining series such as Beavis and Butt-Head. But CN Real will forever remain an infamous example of what not to do when re-vamping a TV network.
Last edited: Apr 10, 2021
K

Never heard of this, maybe it didn't reach LATAM?

They've been on life support for almost the past decade.

This decade? They're on the clock.

Andrew WK looks like that attac GF Meme in that second screen grab.

I remember seeing these shows on and thinking why the hell is this on Cartoon Network?

Channel was free when i was a kid on television here. Then they pulled it and tried to ask money for it. Nobody joined channel died.
You must log in or register to reply here.

Jubenhimer replied
Jul 29, 2021
Trick Moon - Why does everyone like this again?
Opinion

Jubenhimer replied
Apr 3, 2021
Liquid Television was ahead of its time

SF Kosmo replied
May 21, 2021
Movies/TV/Games/Music/Books that defined Middle school culture for you?