Recently, speaking in an interview with Area Jugones, Cyberpunk 2077’s quest director Mateusz Tomaszkiewicz spoke about the same, saying that its freedom of choice and its non-linear nature are things that help it set apart from The Witcher, and offer a new kind of experience.

Tomaszkiewicz said that though Cyberpunk 2077 will still feature elements seen in previous CD Projekt RED games, such as narrative choices and consequences and strong, well-written characters, the game will also put a great deal of focus on offering players a higher degree of freedom during gameplay than previous games made by the studio ever did.

“We still have the elements that have appeared in previous games,” said Tomaszkiewicz. “As I mentioned before, we have decisions, consequences, good characters, etc. I think the new thing in this project and that takes it to the next level is the non-linearity of the gameplay, which we will realize when we play through the missions.”

“Which means there are many ways to complete missions based on how you’ve created your character, tools you use, etc,” he continued. “And I think this is something that makes our game different from The Witcher. Because in The Witcher we had a basic loop in the gameplay, finding non-linearity in the narrative section. This time the gameplay will also have a non-linear character. I think this is where the big difference lies in terms of the complexity of our missions, compared to The Witcher.”

In the same interview, Tomaszkiewicz also spoke about weapon variety, as well as what other games Cyberpunk 2077 takes inspiration from. Read more about both through the links. The RPG is currently without a release date, but it’s scheduled for an appearance at E3 2019, so hopefully we’ll learn more about it come June.
Click to expand... 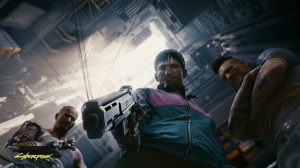 A lot of hype is riding on this game, and I wish nothing but the best to CD Projekt RED.
Reactions: llien, CrustyBritches, Mista and 1 other person

Everything about this sounds like the sequel Deus Ex always deserved.
Reactions: Fake, Saber, Sentenza and 5 others

MiyazakiHatesKojima said:
I'm predicting a Q1 2021 release to achieve their full vision.
Click to expand...
I wouldn’t be surprised if it gets delayed.

Got my full trust in them. Don’t mind them delaying the game better than rushing it out and then everyone will start whining

“Which means there are many ways to complete missions based on how you’ve created your character, tools you use, etc,”
Click to expand...
Hey Rockstar, read this..
Last edited: Apr 29, 2019
Reactions: TeamGhobad

MiyazakiHatesKojima said:
I'm predicting a Q1 2021 release to achieve their full vision.
Click to expand...
I'm reallllllly hoping it comes out no later than 2020.

Almost feel like he is talking about a classic CRPG to me.

If they can unite the complexity of classic CRPGs with the cinematic flair of AAA games, it will blow everyone's minds.
Reactions: blly155

my guess is a 2020 release. i can't see it coming within the next year so probably earliest would be ~May 2020 and they need to get it out before next gen consoles release unless they're making it cross gen. If they are then they could probably get away with another year with ~May 2021 the absolute latest for release.

we have no idea how far along the development is so it's anyone's guess really. everything we seem to hear suggests it's still deep in development and they're still trying to figure out what they want the game to be.

hopefully we get a better idea of where things are at when E3 comes along. i am hopeful that we'll get a release date there.
Last edited: Apr 29, 2019

Don't overpromise CDPR... it will backfire.

this game will change the industry.

I refuse to believe that anything that is still being designed to run on baseline consoles will take anything "to the next level". Tell me that you're focusing exclusively on next gen and I will happily get on your hype train.

To think that this beautiful and ambitious game needs to also play nice with a god damn 2013 xbox one makes me sad.
Last edited: Apr 29, 2019

FranXico said:
Don't overpromise CDPR... it will backfire.
Click to expand...
They’re qualified to do so. After Witcher 3, CDPR proved that they’re worth all the trust and faith. I never doubted them before and never will now.

Well CDPR have a proven record and have become the big dog when it comes to RPG's , in my eyes they cant do no wrong . Every game they have made has been superior to the last by a considerable distance.

Granted Cyberpunk will be a completely different animal to the Witcher Series , if they can keep that high level of story Telling and narrative we are going to be in for an Masterpiece.

I want the game like everyone else but please CDPR take as long as you need .

Inviusx said:
I refuse to believe that anything that is still being designed to run on baseline consoles will take anything "to the next level". Tell me that you're focusing exclusively on next gen and I will happily get on your hype train.

To think that this beautiful and ambitious game needs to also play nice with a god damn 2013 xbox one makes me sad.
Click to expand...
they have never flat out said its coming for current gen systems they have always used "aiming for" or "our goal" which makes me wonder if its Xox or PS4 Pro exclusive.

Oh, it's this interview AGAIN.
While more Cyberpunk talking is always appreciated from me, can't deny I honestly HATE this little trick gaming publications do.
I'm talking about taking a single interview and publishing *several* articles about it, recycling every single answer in it as a new headline.

Imagine this masterpiece 65yrs in the making was built from scratch for next gen, with new tech mind...goddamn the possibilities would've been skys the limit

I hope the game is as free and expansive in exploration as a GTA Game. That you can truly leave the condensed, narrow corridors of skyscrapers for more open and varied locations.

And in games like GTA San Andreas you could leave the city and go explore the mountains, farm lands and terrain. I wonder if Cyberpunk will have that?

To support a 50-100 hour game you need diversity in the environments!

John Lee Packard said:
I'm reallllllly hoping it comes out no later than 2020.
Click to expand...
I feel they've gotta hit 2020 as an homage to the original pen and paper, Cyberpunk 2020.
Reactions: Red Crayon Aristocrat

This game cannot come soon enough but I am willing to wait for the quality they put out. Why don't other devs/publishers takes queues from their fantastic games!