Opinion Trailer Elden Ring: George R.R. Martin Reveals What Exactly He Did for the Game

Elden Ring: George R.R. Martin Reveals What Exactly He Did for the Game

One of the most notable qualities of Elden Ring (outside of the fact that it's another Soulslike [...]

In a new conversation with WTTW, Martin opened up for the first time in an extensive manner to talk about Elden Ring and how he collaborated with FromSoftware. Martin explained that even though he's not big into video games, FromSoftware approached him a few years ago to help work on the title. From that point, he created what essentially became the basis for the world in which Elden Ring would reside in. FromSoftware then took his creation and adapted it into the video game that it is today.

Martin stressed that it has been a long time since he has actively worked on Elden Ring in a major way. Since his work on the project essentially needed to come before everything else, he hasn't really been associated with it in any manner for "several years". Still, he says those at FromSoftware have continued to keep him in the loop over that period of time and have consistently shown him how the title is progressing. Speaking to its impending release, Martin also said he is "as excited as anybody else to see it."

Pretty sure he just misspoke as he's not a gamer but that'd be a helluva slip if true.
Reactions: ripeavocado, Soodanim, ArtemisClydeFrog and 1 other person

The young female narrator sounds very much like a young, blind artist from Ariandel if you ask me.
Z

Translation: he was mostly paid for the marketing / brand.
Reactions: imissweed, SecretAgentHam, mrabott and 21 others

Seems like he did more for this than seasons 6-8 of Game of Thrones.
Reactions: imissweed, SecretAgentHam, ripeavocado and 27 others

Cert.in.Death said:
The young female narrator sounds very much like a young, blind artist from Ariandel if you ask me.
Click to expand...

From has reused voice actors in their games (or the studio they use for voice work does anyways).
Reactions: DavidGzz and ArtemisClydeFrog

I still want to know what happens to Jon after getting stabbed to death by the Night's Watch members.
Reactions: imissweed, mrabott, PnCIa and 5 others

He hasn't been involved for a while. We knew that as the game is releasing next year
Reactions: ripeavocado, dotnotbot, zombrex and 1 other person
R

We all know what it is. Story sequel or not this is dark souls gone open world by another name.
Reactions: Ryu Kaiba, existensmaximum, kuncol02 and 2 others

It's really neat that this is apparently the first game to be formed around the story and not vice versa amongst the Souls games. Depending on how this whole thing plays out, I may just consider it an actual sequel to Dark Souls. After all we do have that whole painted world from the DLC. Damn I love FromSoft.
Reactions: Soodanim, Panajev2001a and ArtemisClydeFrog

We definitely know what he hasnt done. Finish the winds of winter.
Reactions: imissweed, trickybiff, existensmaximum and 4 others

I'm really curious to how much of an impact his involvement has on the story and overarching lore and how it compares to previous From Software titles.
Last edited: Jun 23, 2021

There are too many things in the trailer for people not to suspect a sequel, even if it’s in the sense that Nier is a sequel to Drakengard.

Maybe they just can’t do anything else, and we’re destined to get remixes and improvements on Dark Souls forever. I welcome that with open arms - I love the base gameplay loop too much to care about the setting having similarities.
Reactions: Slothbeing1209
B

I really hope it's not a sequel to Dark Souls. I love Bloodborne, but the Dark Souls setting is really not my kind of thing. Please let this be a completely new story with original characters and setting.
Reactions: Ryu Kaiba and vaibhavpisal

Zones said:
Translation: he was mostly paid for the marketing / brand.
Click to expand...

I've never read any of his material but I'm sure it's fine. More of a gameplay guy anyways. Hype!

It definitely looks like a Dark Souls sequel. Just a different setting and some things inspired by Bloodborne.

Not complaining. Dark Souls kicks ass. If we aren't getting Dark Souls 4 then I'll take this instead. I don't think Elden Ring is a one off thing like Bloodborne/Sekiro but a full on spiritual successor to Dark Souls and we will see Elden Ring 2 at some point.
Last edited: Jun 23, 2021

George is working closely with FromSoftware to recreate digitally his character and intellect so an AI surrogate (codename 'project Elden Ring 3') can finish writing The Winds of Winter before the Darksign traps us all in a timeloop where we all die before the story is finished.
Reactions: imissweed and Kilau

I don't why people expected anything else. Of course he was going to give life to the world and lore, and obviously, this must be done in the first steps of making the game.
Last edited: Jun 23, 2021

All I wanna know is if we get a Patches with the body of GRR Martin in this game
Reactions: imissweed, Barakov, Con-Z-epT and 2 others

Zones said:
Translation: he was mostly paid for the marketing / brand.
Click to expand...

to most and not super fromsoft fans ...it pretty much seem a new dark souls game

skit_data said:
All I wanna know is if we get a Patches with the body of GRR Martin in this game
Click to expand...

"What-how did you?!? Okay, let's, let's think this through, alright? I was only joking, mate! Didn't mean anything! Tell you what. Since we're now friends ... take this. As a token of our friendship."

received A Song of Ice and Fire
Reactions: imissweed and skit_data

j0hnnix said:
We definitely know what he hasnt done. Finish the winds of winter.
Click to expand...

He can do whatever he wants as far as I'm concerned.
I don't get the whole "he owes us the remaining books or whatever" if that's what you were going for.

"And then this character dies."
"Yes, George. We were planning on it."
"Uh..but then that character dies too!"
"Yup, totally on board for that."
"But did you see THIS chara..."
"Dead. Totally dead. And the knight that swore to guard them, plus their eldest son. The other one having gone totally mad, of course."
"..."
"Welcome to Souls games, George."
Last edited: Jun 23, 2021
Reactions: Slothbeing1209, Con-Z-epT, Gaelyon and 1 other person

Nickolaidas said:
"What-how did you?!? Okay, let's, let's think this through, alright? I was only joking, mate! Didn't mean anything! Tell you what. Since we're now friends ... take this. As a token of our friendship."

received A Song of Ice and Fire
Click to expand...

Turns out you gotta finish the game three times to combine three ASOIF to get The Winds of Winter.
Then you gotta get three of TWoW to get A Dream of Spring.

Hardest trophy in the game, no doubt.
Reactions: Nickolaidas

He should finish his books before he dies. Miura just died a month ago and Berserk is left unfinished. Sad stuff
Reactions: Slothbeing1209

It's great they made an effort to get all the world's lore in order before making the game.....but I play From games for the exploration and cool enemies,so they could have slapped any old story together and it wouldn't really make much difference to me tbh.

Hidetaka Miyazaki revealed all new details about Elden Ring, Dark Souls spiritual successor, in a number of now translated interviews - including from Famitsu. Miyazaki discussed how summons, co-op, and PvP in Elden Ring would work, further broke down the lore and story of Elden Ring, and discussed the open field of Elden Ring vs its 6 major "Legacy" dungeons.
Click to expand...

alife said:
It'd actually be pretty cool if the world in Elden Ring took place inside of the painting created by the Painting Woman who resides in the Painted World of Ariandel.
Click to expand... 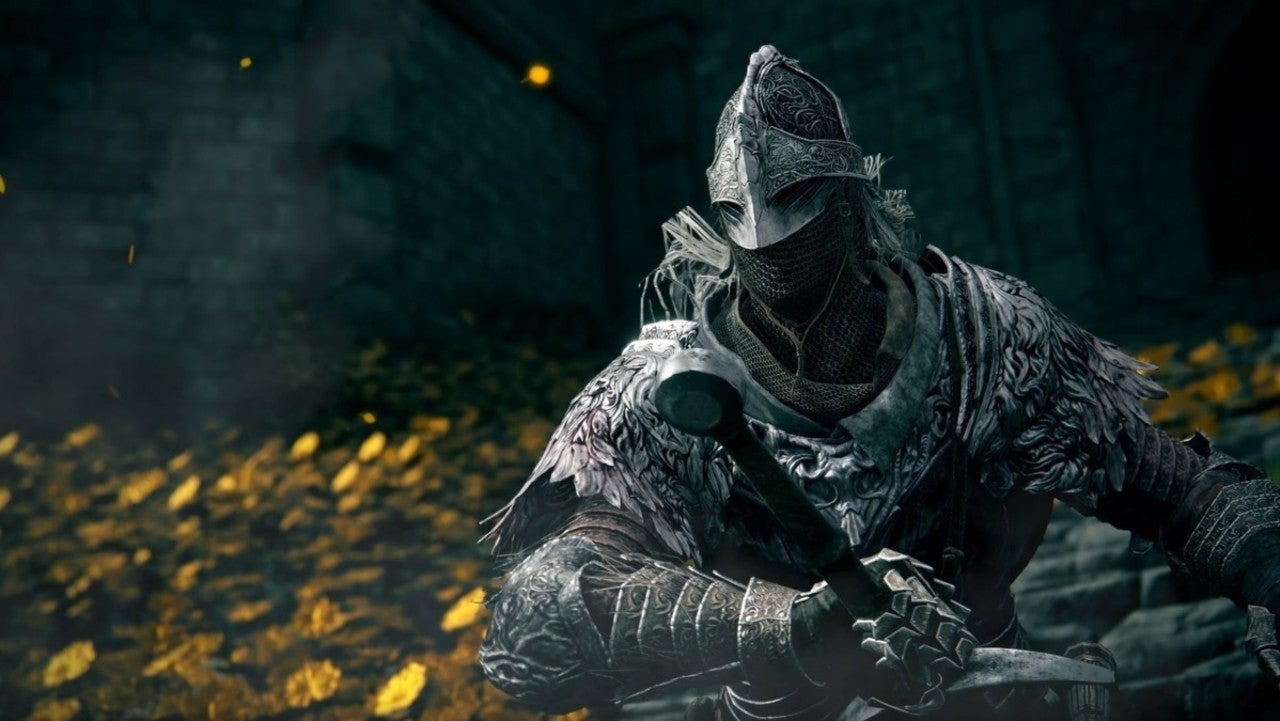 FromSoftware's upcoming action-adventure game, Elden Ring, notably features a collaboration with George R.R. Martin, who is the author of the A Song of Ice and Fire saga. While Martin's work on Elden Ring might be one of the most notable aspects of the title, however, it sounds as though Martin didn't actually contribute when it comes to the in-game writing that will be seen in the finished product.

According to a new report from IGN, the in-game text that is found within Elden Ring is actually being written by Hidetaka Miyazaki, who is the director of the project. Miyazaki is the one who has primarily written the text that has been seen in past games from the studio, notably with Bloodborne and the Dark Souls saga. Speaking more to how the story in Elden Ring as a whole will be told, those at the studio said that the narrative in the game is still doled out in a similar manner compared to past games that it has worked on. "In From fashion, the story is told in fragments, and we haven’t changed our principle of providing a world and narrative that the player can interpret for themselves," said FromSoftware's marketing lead, Yasuhiro Kitao.
Reactions: Northeastmonk

Sounds like GRRM just did the world building. That works for me. I'm sure it'll be an amazing DS3 sequel.

He pretty much just said he did what we all thought he would have done for anything hes involved in and that's perfect in my opinion.
You must log in or register to reply here.