TheGrat1 said:
It would be great if her hair actually looked "wet" when she got out of the water. It still bounces around as though it is perfectly dry when it should be clinging to her and clumped together.
Click to expand...

VFXVeteran said:
That's because there is no such hair shader that I can think of in a game. Rendering hair lighting/shading is one of the most difficult and expensive things in a videogame/film. We are quite far from getting a more complicated hair shader like the Marschner technique:

I feel like I'm the only one who noticed this part after she got out of the water. 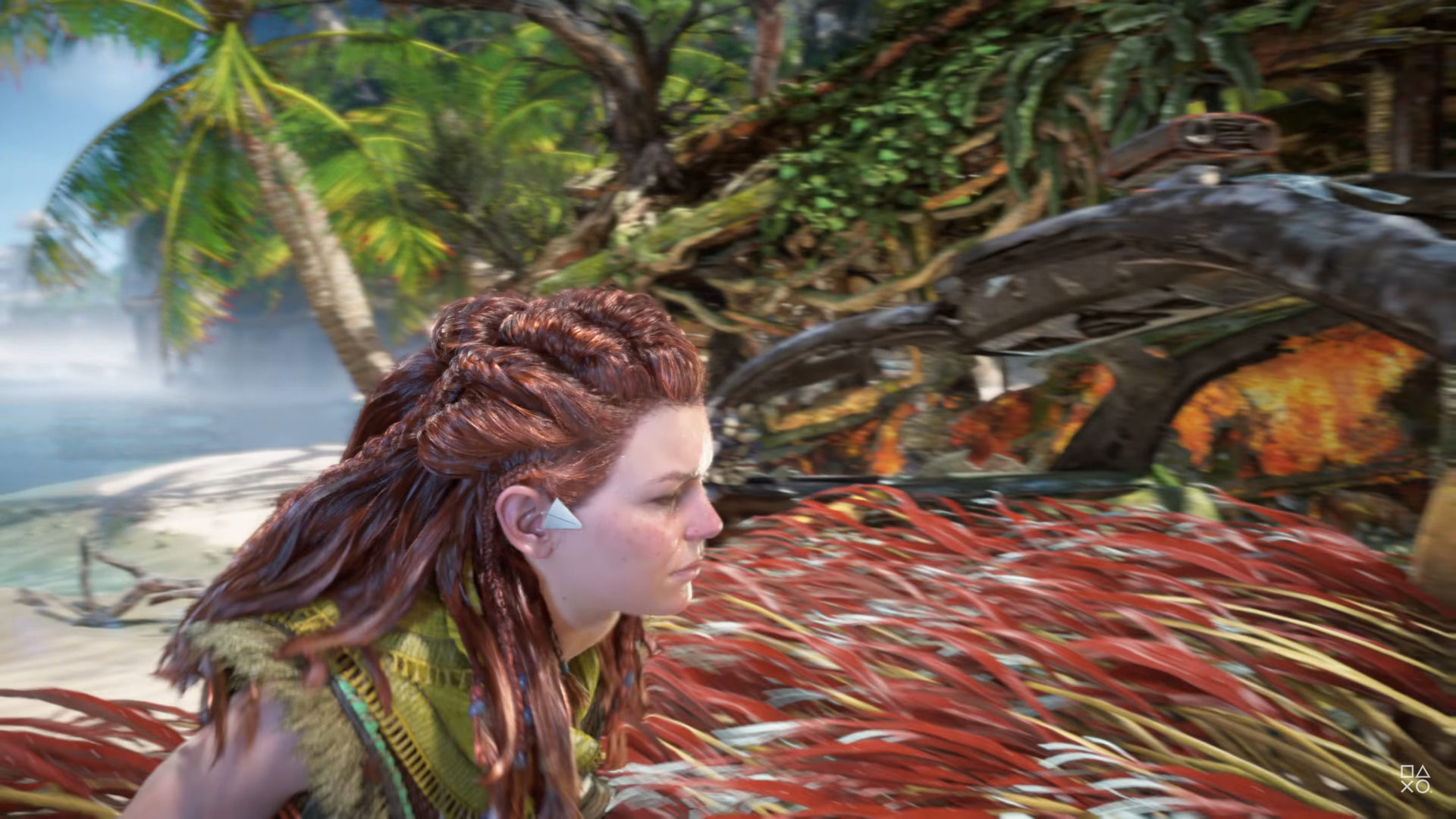 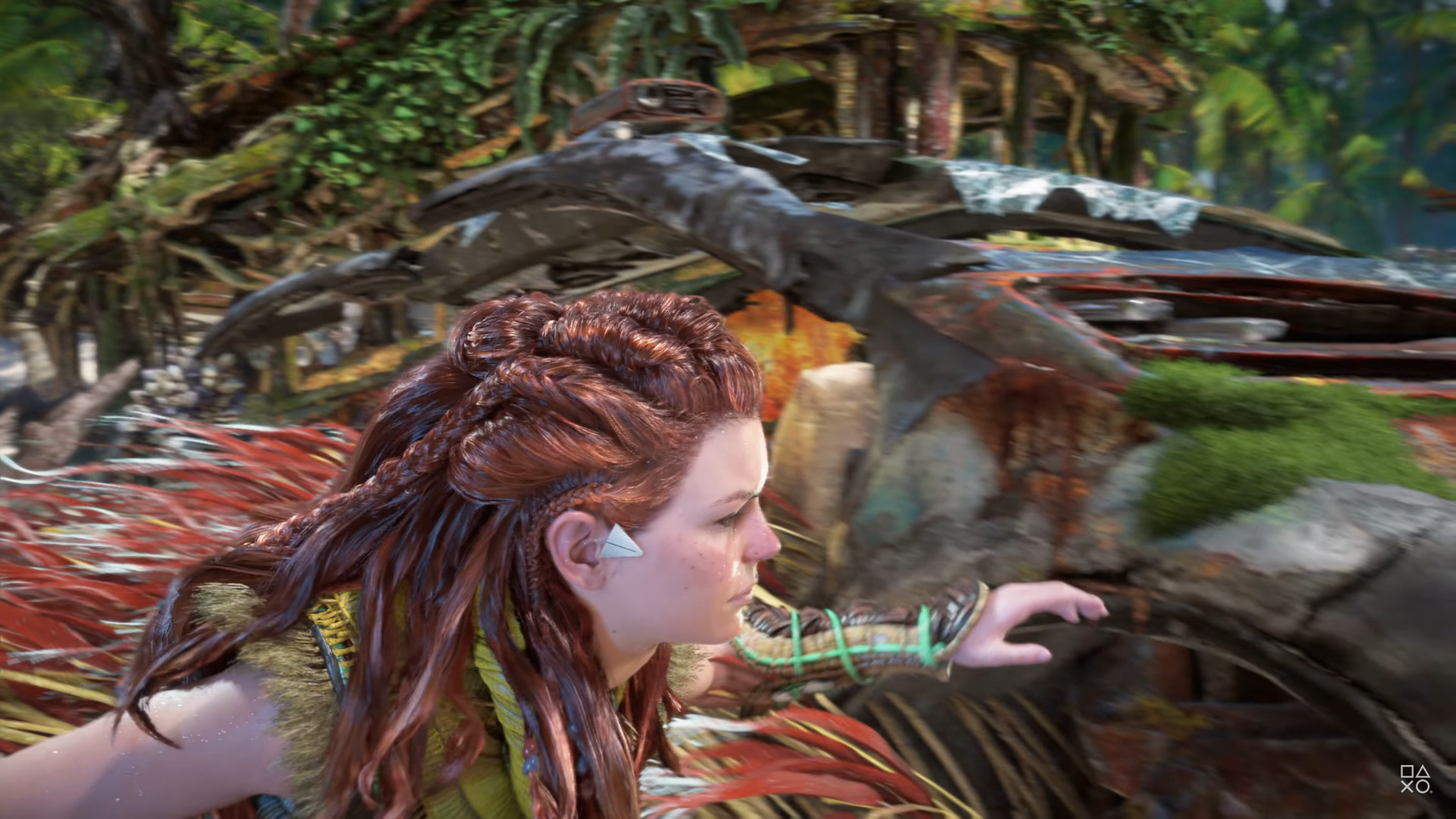 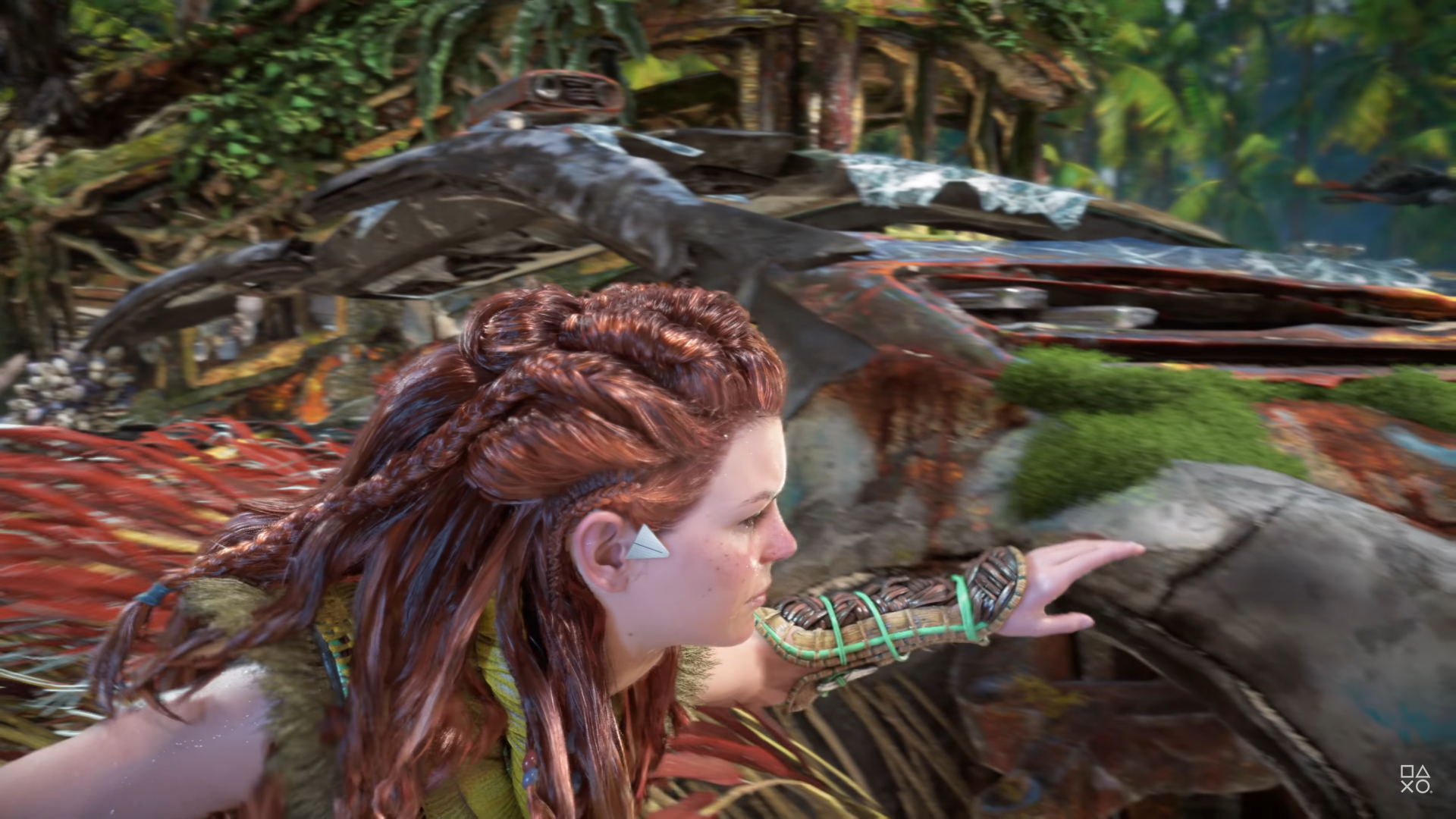 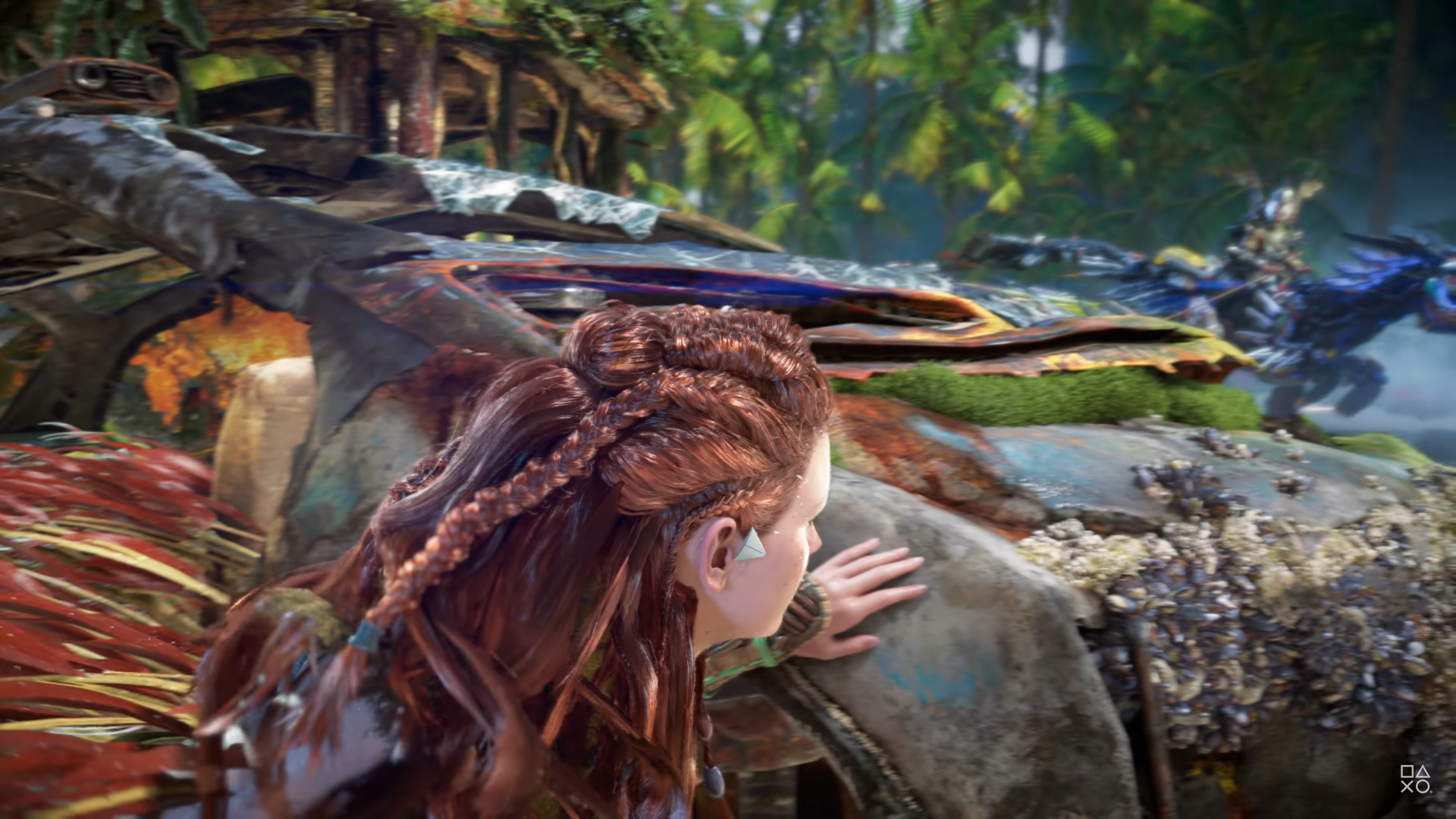 Quartermaster said:
I feel like I'm the only one who noticed this part after she got out of the water.

I suppose I could have chosen my words more carefully. Aloy's hair "looks" wet in a manner consistent with just getting out of the ocean but it does not "behave" wet. This is what I mean:

Long wet hair does not bounce like that. It is waterlogged and heavy. It should cling to her and itself as well as have minimum movement away from gravity.

I understand that hair is extremely difficult to animate and render realistically, especially in real-time. I was not even complaining that it was not better simply wishing that it was. The hair looks fantastic when it is underwater so I get the feeling that they could do better with a little more focus and polish. I would not even bring it up if Guerilla was not renowned for their technical prowess.

P.S.: I originally typoed "fantastic when tit is underwater" and seriously considered leaving it that way!

VFXVeteran
Perhaps they could write a script where the "material" of the hair is given a property of greater density that wears off the longer she is out of the water? Even something like that would make me extremely happy.
Reactions: CamHostage

VFXVeteran
Perhaps they could write a script where the "material" of the hair is given a property of greater density that wears off the longer she is out of the water? Even something like that would make me extremely happy.
Click to expand...

Hair density isn't the issue. You can make 2 hair shaders connected to a switch node shader that gets triggered when the hair is in water. The problem is the hair shader itself. Most of these hair shaders are based off of the Kajia-Kay model. Very good for color but sucks for specular highlighting. Using the more sophisticated Marschner hair model -- which uses 3 specular lobes and a possible scattering lobe -- is too expensive for realtime. Getting the highlight done would be tricky under all lighting conditions. Some of Aloy's hair has painted specular which means it's not even real.

imagine if they do a game with such incredible detail , for psvr2.... be gorping at all sorts lol.

TheGrat1 said:
Long wet hair does not bounce like that. It is waterlogged and heavy. It should cling to her and itself as well as have minimum movement away from gravity.

...Perhaps they could write a script where the "material" of the hair is given a property of greater density that wears off the longer she is out of the water? Even something like that would make me extremely happy.
Click to expand...

Right, it's not the look (although it seems there is a bit of difference in the look), it's the physics, and really, it's the "sell" of the physics. They need to practically turn hair physics off (if possible; I'm not sure if there's an actual "% Dial" in the hair systems or what it looks like at half-speed/half-movement, but at least there is a variable in there for like "hair_iswet"), then slowly crank it back up. Even if it's not perfectly simulated, the character animation could really use a different motion set there to just not be distracting.

Little details like that are tricky as games go forward. The more realistic it gets, the more you see what is not yet "realistic".
Reactions: TheGrat1
J Although Forbidden West is also releasing for PS4, with development having begun on that console before continuing in parallel with its successor, it is undoubtedly meant to be played on Sony’s brand new and almost impossible to buy hardware. The big “wow moment” in its latest trailer comes when Aloy submerges herself into a tropical reef that’s teeming with neon coral, giant clouds of fish and the odd AI-powered alligator. It’s a signifier of both a newfound scale to her escapades and the sheer fidelity Guerrilla has lavished on its latest creation.

"Our engineers spent an incredible amount of time on the water rendering and wave techniques. They probably spent years on that," said Horizon Forbidden West game director Mathijs de Jonge in a new interview with GQ. "There’s so much detail we can put into San Francisco’s overgrown ruins. I don’t think many people have noticed but every strand is rendered individually," de Jonge continues, referencing the individual strands of moss permeating the ruins of California.

In Horizon Forbidden West, protagonist Aloy is leaving her former stomping grounds of Zero Dawn to journey westward to California. This is why de Jonge is talking about the wave technology and water rendering taking up such a large chunk of the development process: because it's basically encapsulating a large amount of the game's open-world map on the west coast of America.

Having discovered the story of her origins in Zero Dawn, what comes next is set to be a different kind of adventure. “You want to stay true to her character, but she has to evolve,” says McCaw. “As she journeys into the mysterious frontier of the Forbidden West, she is going to evolve and I think people are really going to like it.” Don’t just take his word for it though. Covid willing, you’ll be able to play what's sure to be the biggest game of 2021 come the holiday season. It will be an epic in every respect.
Click to expand...

I'm from the UK and to me the water looks so unrealistic. Where is the murky shitty water we get in Blackpool? Where are the nappies and empty crisp packets and plasters (band aids)??
Reactions: TheGrat1
You must log in or register to reply here.

Horizon Forbidden West game director says cross-gen development was "not limiting in any way", so many great ideas ended up being included