Grand Raid Offroad was pretty popular a year or two ago: 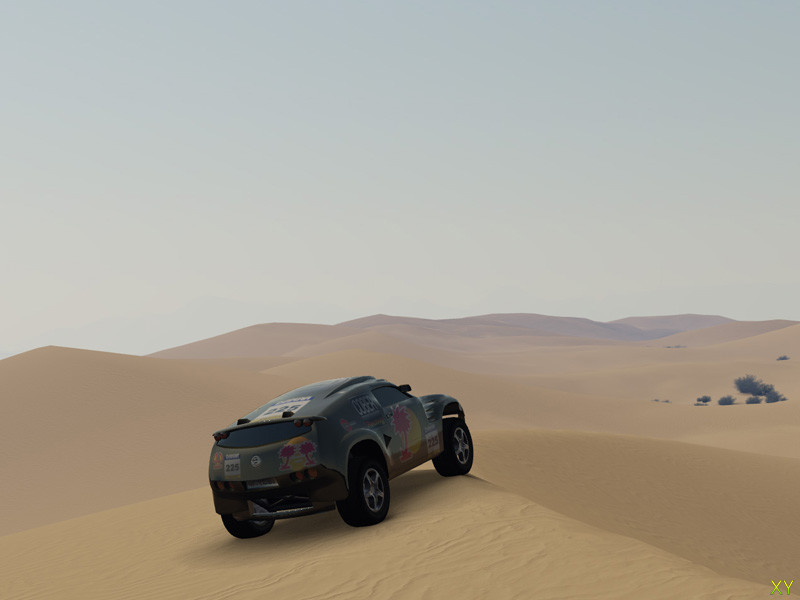 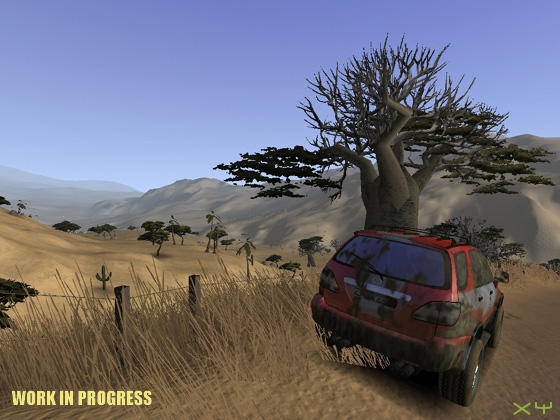 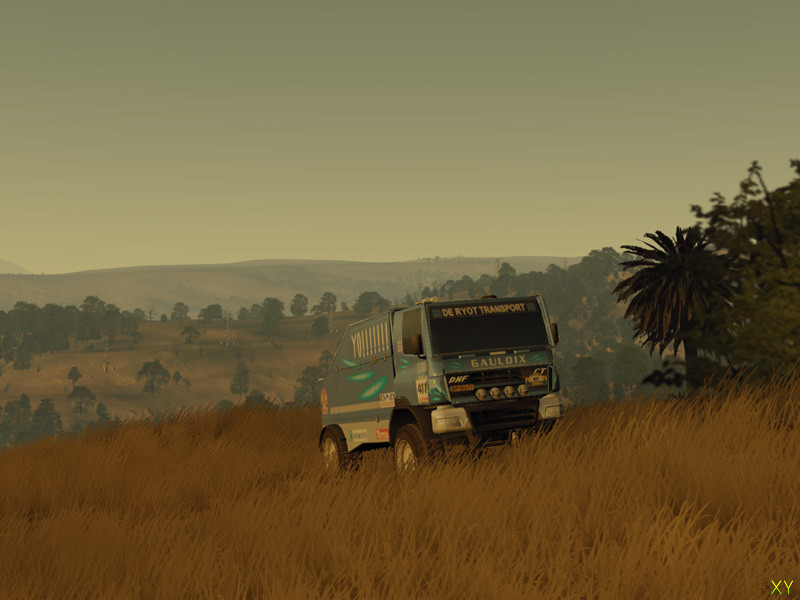 Anyway, Asobo has got signed up by Codemasters:

Friday 15th August/...Set to revolutionise multi-terrain racing with the largest environment ever created in race gaming, Codemasters today announced signing the worldwide publishing rights to FUEL from Asobo Studios. Promising a truly next generation addition to the racing genre, FUEL is in development at Asobo Studios in Bordeaux, France, for the PLAYSTATION®3 computer entertainment system, Xbox 360® video game and entertainment system from Microsoft®, Games For Windows® LIVE and due to release in 2009.

Born of Asobo Studios cutting-edge proprietary engine, the result of over four years in development, FUEL will present players with an astonishing no-boundaries playfield thats over 5,000 square miles (14,000+ km²) in size. Creating the ultimate competitive go-anywhere racing experience, FUEL will have players competing across wildly different terrain and executing spectacular death-defying stunts as they race dozens of varied two and four-wheeled rides and explore this epic world on an unprecedented scale.

FUEL is set in an alternate present in which whole swathes of the globe have been ravaged by the effects of climate change brought on by decades of environmental abuse. Here oil prices have rocketed and yet a new breed of racing junkie takes to the wastelands, pitting their grungy home-tuned vehicles against each other in an all-new extreme sport as they compete to win fuel supplies. To triumph means travelling the wastelands to challenge the best; from the tsunami-wrecked pacific coast through the Nevada wastelands, including the Grand Canyon, up treacherous snow-capped mountains, thick forests, arid deserts, abandoned lakeside resorts and much more.

Bringing this vast, open ended landscape to life is a dynamic weather system with full day and night transitions, brilliant sunshine, torrential rain and everything in between, plus destructive tornados, sandstorms, thunderstorms, lightning strikes, and blizzards requiring mid-race strategy changes.

FUEL raises the bar in terms of scale and exhilaration for racing games. We begin with the largest racing environment to appear in gaming  ever. With our accelerated effects of climate change and dynamic weather system we add an extra dimension that change races on-the-fly and constantly presents new challenges to players, said Sebastian Wloch, Chief Executive Officer, Asobo Studios.

Player choice lies at the heart of FUELs action-packed races and with a huge range of vehicles, packs of up to 16 vehicles speeding across diverse terrain and a no-boundaries, no-limits approach to racing, means players have never had so much freedom to conquer the wilderness and take the chequered flag.

The technology Asobo Studios has developed to build FUEL is ground-breaking. To create a game on this unprecedented scale to this level of graphical quality, complete with all the dynamic weather effects, is a great achievement, said Barry Jafrato, Senior Vice President of Brand, Codemasters. FUEL had to be a special title for Codemasters to include in our racing portfolio and we believe that from both a gameplay and a technical perspective, FUEL compliments our long standing tradition of driving excellence.

Complete with the ability to go online to explore this massive world and compete in hundreds of multiplayer challenges, FUEL is coming in 2009 for the PLAYSTATION®3 system, Xbox 360 and Games For Windows. More on FUEL will be revealed from Games Convention Leipzig (20  24th August, 2008).
Click to expand...
And now Gamespot has some GC impressions:
http://www.gamespot.com/xbox360/driving/fuel2009/news.html?sid=6196131&om_act=convert&om_clk=newsfeatures&tag=newsfeatures;title

Races will be multivehicle and multiroute affairs, with bikes, quads, trucks, muscle cars, SUVs, and "specials" all tearing up the track at the same time. We were shown images of a tornado ripping through a building, with the resulting debris forcing drivers to take a different route.

Fuel's single-player game will be career-based, though at this stage we know only that there will be circuit races. You'll also be able to customise your character with tattoos when you win certain races, as well as create your own races on the fly to challenge friends online. The online mode will offer support for up to 16 players in total, and thankfully the two modes will integrate seamlessly so you'll be able to move back and forth without any interruption.

Fuel is still some way off its currently scheduled second-quarter 2009 release date, but it will be hitting the Xbox 360, the PlayStation 3, and the PC simultaneously.
Click to expand...
And a video:
http://www.gamespot.com/xbox360/driving/fuel2009/videos.html?mode=all

The video looks nice, but it will be interesting to see how they are gonna make all the racing interesting, with level design etc. Just driving over hills race after race probably won't be so fun.
R

So it's a Dakar style racer? Yes please.
O

This is the game I was talking about in the MotorStorm Pacific Drif thread.
I'm glad they finally got an editor.
This game was really promising few years ago.

We could have a very nice Paris-Dakar style game.
C

Not very familiar with this developer but the technology they are putting into this game is amazing, this is officially on my to watch list.
R

Sounds interesting, but I would have preferred a more traditional raid racer with navigation and vehicle maintenance. But I'll probably give this a look anyway.
R

here is some mini video (which shows some gameplay) - looks like a motorstorm 1:1 copy :/

Count me in, can't get enough of off road racers, the tracks and different road surfaces make every race exciting
R

don't count these guys out - a couple quick-dev license games may be funding a really good racing title.
R

yeah I realized that when I read the PR, I was like...isn't this that grand raid game?

so they're gonna change the textures on the trucks a bit, throw in a ripped from the headlines plotline and make the game they wanted to make.


no problem w/ me, I'm looking forward to it. I thought Grand Raid Offroad was dead forever.
N

Back from the dead. Someone needs to remake 1NSANE.
J

Wasn't there some other game called "FUEL" that kept showing up on the upcoming release list but eventually turned into vaporware?
A

ram said:
asobo studios = licensed crapd eveloper
Click to expand...
You have no idea what you are talking about.
R

jetjevons said:
You have no idea what you are talking about.
Click to expand...
sure - i love my ps2 version of ratatouille and soon wall-e. also, super farm, garfield 2 and ct special forces (the 3d one) are AMAZING games.

PS: i know, even insomniac made one shitty game (disruptor), but this studio is responsible for at least half a dozen crap games.
O

I just watched a video on gametrailers and I must say it looks pretty cool. The world needs more arcade racers. I'm in. (I don't want semi-sim crap like Dirt&Grid)
P

what the fuck.
T

I really like this screenshot...yet I have no idea why.
P

I more drawn towards the appearance of the original concept though, but I like how Fuel seems to have more focus. GRO looked more like an independently made game like LFS. I know some people don't like the over the top style of Fuel but the huge jumps that were shown in the GRO trailer also showed that realism was never an absolute goal.
C

how did i miss this? looks awesome! i didnt enjoy motorstorm, and motorstorm 2 looks more of the same, but maybe this will have all the crazy, and less of the annoying, we shall see, still wouldve liked to see GRO aswell as this tho
F

ram said:
here is some mini video (which shows some gameplay) - looks like a motorstorm 1:1 copy :/

http://video.google.de/videosearch?q=fuel+codemasters&hl=de&sitesearch=#
Click to expand...
But it's more open world, and not so closed circuit as the MS series. Both look to cater to different styles of play (IMO, judging from the little i'm seeing here).

Teknoman said:
I really like this screenshot...yet I have no idea why.
Click to expand...
I like the atmospheric scattering (blue haze in the distance), soft shadow considering the lack of direct sunlight, and the reflection which is perfectly done (not oversaturated in some games like Forza 2).

It makes for a very cohesive looking picture where all the lighting elements come together and make the lighting look believable. Clean IQ helps as well.
O

wow, the gamespot vid in the opening post looks light years better then the early stuff. looks seriously killer, like motorstorm on a HUGE scale
B

I really like this screenshot...yet I have no idea why.
Click to expand...
the lighting? that's the reason for me
T

Edit: and there is videos and stuff in this months QORE(another 4 letter word)
W I like how a three year old, barren teaser shot looks more appealing than those. I was vastly more interested in the Paris-Dakar style game as well.
D

I'm glad developers have gotten over the stupid street racing trend and started a new unstupid one. I'm not convinced by this game yet, but sounds like it could be radical.
M

So this will be like those Operation Flashpoint custom race missions. Cool.

I mean, I don't hate what they're trying to do here, but
Teknopathetic said:
I like how a three year old, barren teaser shot looks more appealing than those. I was vastly more interested in the Paris-Dakar style game as well.
Click to expand...
this is pretty much how I feel.

Still, instead of moping about the change in direction they've taken (Mad Max Xtreme racing!!), let's concentrate on what this game could deliver, and the "go anywhere!" mantra they've adopted makes me hopeful that they'll continue to stick out and do something different.

And it always warms my heart to see a smaller dev (or a dev that started small) able to work on a project they came up with on their own, one that they're really loving.
R

wtf it turned into a motorstorm clone
R

VibratingDonkey said:
I'm glad developers have gotten over the stupid street racing trend and started a new unstupid one. I'm not convinced by this game yet, but sounds like it could be radical.
Click to expand...
yeah - now its stupid offroad racing (baja, pure, motorstorm 2, fuel...) :lol
R

FUEL will present players with an astonishing no-boundaries playfield thats over 5,000 square miles (14,000+ km²) in size. Creating the ultimate competitive go-anywhere racing experience, FUEL will have players competing across wildly different terrain and executing spectacular death-defying stunts as they race dozens of varied two and four-wheeled rides and explore this epic world on an unprecedented scale.
Click to expand...
Is it Baja or circuit? or both?
H 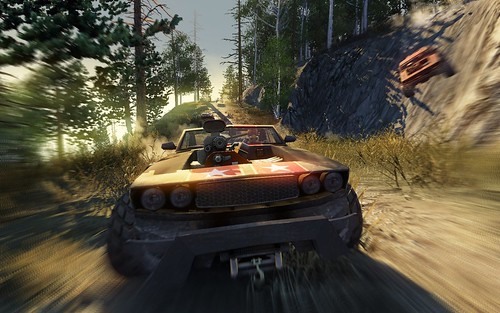 Gamespot have just recently gone live with one of the very first hands-on articles for FUEL. Here are a couple of quotes from the article

Check it out by clicking on the link below

On top of all this there is also a 4-page FUEL feature in the new issue of Official PlayStation (Feb 09). The feature takes pride of place and opens the magazine's preview section.

The magazine should be on shelves in the next couple of days. Here are some quotes from the Magazine article: 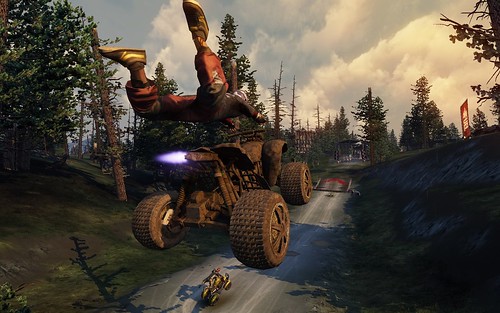 wow, I was not expecting this game to turn out like this at all
L

So, a "Dakar sim" ended like a Pure/Excite Truck clone ? Total fail
R