I had a dream about having a dream.

I've had that happen several times. I'm not sure if more than two layers of dreams are possible tbh

I only have Lucid Dreams. Half Lucid Dreams but since i moved to my parents place its really quiet around here so i can really deep sleep

ChainedMaster said:
In my dream I fell asleep and had a weird dream about traveling. Then I woke up in my dream, then I woke up for real. So my question is, how far down the rabbit hole do you think is possible? How many layers of dreams do you think is achievable? Mine was only 2x. But could 3x be possible?
Click to expand...

You’re still in the dream right now. Wake up.

ChainedMaster said:
In my dream I fell asleep and had a weird dream about traveling. Then I woke up in my dream, then I woke up for real. So my question is, how far down the rabbit hole do you think is possible? How many layers of dreams do you think is achievable? Mine was only 2x. But could 3x be possible?
Click to expand...

There is no coming out of the dream, even in death.

In your dream were you a narc?

As a kid I'd regularly dream that I woke up and was getting ready for school. By the time I actually woke up, I was usually already late or close to it by then. Shit was so annoying
Reactions: Can't decide 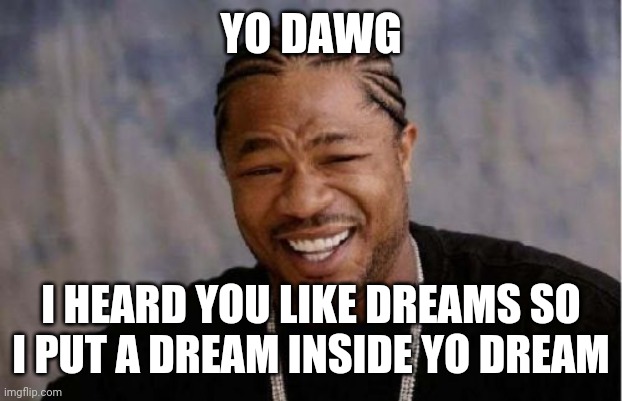 Happens to me plenty, those are always trippy.

EDIT: then again, maybe the "wake-up" events are your brain actually trying to wake up for real, but failing. And then the failed attempt gets absorbed into the dream plot and starts a new plot thread.
Last edited: Oct 6, 2020
Reactions: Vier

Ah, the closed loop of continual waking. The only thing scarier is the closed loop of continual waking into a state of sleep paralysis, I've gotten into those loops many times but thankfully the are hazy and less intense these days with sobriety and age and when it is intense I lock up in paralysis and realize I'm in bed, put effort into wiggling my toe before the shadows, chest demon or the infinite falling comes along.
It's usually based in reality, like being in the bed you went to sleep in and waking up from there, I can turn lucid on occasion and I have control these days to get around these states happening from years of practice and nights of horror but I once had a dream in my early 20's that consisted of waking up in different scenes of seemingly stable reality, more than a dozen or two times that memory held and I still believed I was awake every time until the dreams started breaking down ever so slightly and each time I felt relief waking up into what I believed was my reality, What I believed was me and feeling completely normal but was actually a completely foreign environment, in houses i'd never seen before and some with people I'd never met who were so, so fucking real. They all seemed so real and rigid realities until one little thing like the time on a clock changing and my knowledge of this from lucid dreaming practice would jerk me into a state of panic and onto the net dream scene. It was so glaringly and almost unmistakably real that it still frightens me to this day and remains the single worst nightmare I've ever had, even though I only remember a dozen or two of those states it felt like there were dozens before I was aware enough to remember and not only that but when I finally figured out what was going on and woke up into me own room and familiar reality I continually woke up over and over again only to get to the fridge (for some reason) and realize I was still in bed, paralysed ready to wiggle my toes and get to the fridge again. I spent hours that day questioning my reality even though I knew I was awake, the thought still held on.

Moral of the story, Don't do drugs until you're in your mid twenties or so and have a fully developed brain but if you do, do drugs recreationally while you're young never fuck with trying to lucid dream at the same time, it can really mess you up however if you're sober and past the age of 22/23/24, I'd recommend it cause you can take these experiences and turn them into really amazing trips, flying and fucking for instance or flying and fucking at the same time in a different body. No joke.

I had a small dream yesterday where i had to pull hairs out of my throat because i was suffocating...

Sometimes i feel lucky that 99% of times i don't have dreams...
J

For whatever reason this has been happening more frequently for me lately. Very vivid as well, but they dont stick long after I wake up. Thank god I've never had the sleep paralysis thing.

GymWolf said:
I had a small dream yesterday where i had to pull hairs out of my throat because i was suffocating...

Sometimes i feel lucky that 99% of times i don't have dreams...
Click to expand...

DESTROYA said:
Were you a cat ?
Click to expand...

When I was like 10 I had a crazy real feeling dream and at the end of the dream I was back in my room looking at my sleeping body like: “I’m not going to remember this when I wake up.”

So dream me wrote my name on the bottom of a toy and placed it on my nightstand.

When I woke up the toy was there with my name written on it and I have no memory of actually moving it / writing on it.

Fucked with me so hard for weeks. I wonder if I was sleep walking? Nothing like that has ever happened since.
Last edited: Oct 14, 2020
You must log in or register to reply here.

Have you ever had a dream or premonition that caused you to act a certain way?

Feb 29, 2020 started Elektro Demon
Feb 29, 2020
Phunkydiabetic
Opinion Drama Cringe What is it that cats dream about [IT'S ALIENS BRAH] o_O