mod edit: title did not reflect the actuality of the issue. Nintendo would be in breach of EULA because of Imagineer, not the other way round

Last year, Imagineer published Medarot Classics Plus on the Nintendo Switch in Japan, a selection of titles from the Medabots series, some of which were originally released on the Game Boy Advance.

As you might expect, Imagineer has used emulation to bring these titles to Switch, but it would appear that the company has failed to properly credit the author of one of the emulators used, the Game Boy Advance emulator mGBA. mGBA author endrift points to the fact that the title "contains strings matching settings names unique to [mGBA]" as evidence.

However, that's not the issue here – as the Video Game History Foundation's Frank Cifaldi states, mGBA's End User Licence Agreement allows for commercial use. The problem is that the credits for the emulator have been intentionally removed, which, according to endrift, means that Nintendo is "shipping a pirated emulator in a third party title".

How this has happened is anyone's guess, but the fact that mGBA's EULA allows for commercial usage makes the fact that Imagineer didn't approach endrift all the more baffling. The emulator's GitHub page even provides an email address for the commercial licensing of the emulator. 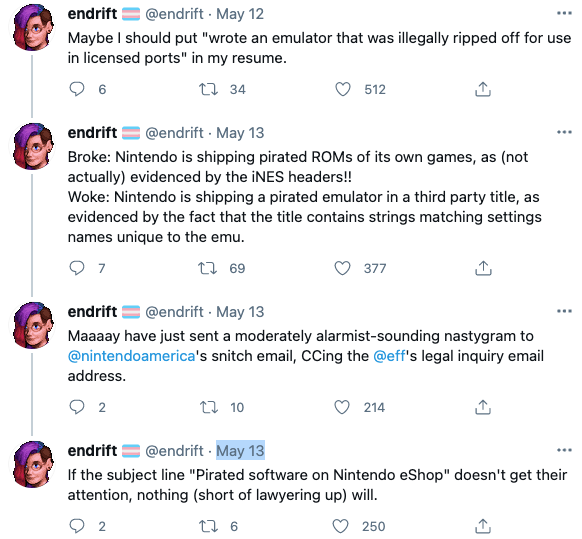 Last edited by a moderator: May 18, 2021
Reactions: Videospel and Shaqazooloo
M

I totally see Nintendo being too proud to credit a third party, while also being unwilling to pour resources in this.
Not a good thing.
Reactions: donfonzie, draliko, Videospel and 2 others

They are already doing this stuff for ages, they straight up download roms from the net and sell it on there eshop.
Reactions: phaedrus, zeorhymer, Esppiral and 9 others

Nintendo: "Ok let's give our fans discounts on..... HOLD THE F UP NO ONE GETS A DISCOUNT, BACK TO YOUR CUBICLE "
Reactions: DonJuanSchlong, donfonzie and Mr Moose

What a strange situation this is. I doubt it will go anywhere, as one person isn’t likely to have or spend the money on a lawyer who wants to go up against Nintendo.

I would say this might make Nintendo more upset with emulation, but they already both use and take down quite a bit.

Edit: it actually has very little to do with Nintendo
Last edited: May 18, 2021
Reactions: Area61 and Shaqazooloo

I'm confused, Nintendo doesn't seem to have anything to do with the game other than it being on their platform, seems more like an issue with Imagineer who developed and published it.
Reactions: PhoenixTank, Griffon, reksveks and 4 others


Nintendo's Defense
Bitch we invented the GBA ...
Click to expand...

This is an extremely misleading title. Nintendo isn't accused of ignoring the emulator's EULA, Imagineer is.
Reactions: Griffon, Soodanim, Sean Mirrsen and 4 others

Everything for the clicks and shaming Nintendo even when it's wrong.

Yeah nothing new Nintendo is the biggest scum when ti comes to platform holders.
Reactions: DonJuanSchlong, Fuz and Vier

Miles708 said:
I totally see Nintendo being too proud to credit a third party, while also being unwilling to pour resources in this.
Not a good thing.
Click to expand...

But it's an easy thing to defend against: just say you're a cheap asshole. Bulletproof, bitch.

Nintendo should do the honorable thing and file a DCMA against them too.
Last edited: May 18, 2021

This. The title is a massive click/flamebait. And considering some responses, it's working like a charm.
Reactions: Griffon

I missed the part where Nintendo were nothing but the platform owner on this one. Fucking article.

Now I think about it, it’s unclear how these strings and settings have been noticed. Did someone go through the code to find telltale signs of mGBA, or are they easily visible within the game as customisation options?

jigglet said:
But it's an easy thing to defend against: just say you're a cheap asshole. Bulletproof, bitch.

Nintendo should do the honorable thing and file a DCMA against them too.
Click to expand...

I've just found it funny and ironic that Nintendo secretly grabbed emulator software after cracking down on emulation for years.

That said, apparently this thread isn't even about Nintendo so I retract my previous statement.
Reactions: jigglet

Why is Nintendo being accused? Shouldn't the developer and publisher be the ones accused?
Reactions: AJUMP23, Vier and jigglet

This reminds me of when Anbernic uses EmuElec in their device without the developers permission.

onesvenus said:
Why is Nintendo being accused? Shouldn't the developer and publisher be the ones accused?
Click to expand...

For one second there I thought you meant the developer of mGBA and I was like:

Extremely ironic considering legally you would have to have access to modded Switch with that digital game being dumped using it in the first place to check out those settings strings lol.

Most probably he/she would have obtained a pirated copy considering the developer.

Game Publishers: If you cant beat them, steal them.

This endrift dude lost all reason when he mentioned Nintendo

Nintendo has anything to do with this. This is on the developer.

Nintendo does approve software for the eShop, right? Makes me wonder what, if anything, they knew, though I’ll give them the benefit of the doubt for now.

EULA? Not sure where the first chap got that from. Those are about the developers/publisher's license to the user... thus End User Licence Agreement.


This looks like Imagineer are in breach of the MPL 2 license. The License itself, Copyright notices for endrift & any other contributors are meant to be included and any modified MPL source files are should be made available.
So not quite "just credit".
Last edited: May 18, 2021

Sony's upcoming Playstation Classic console is apparently using an open-source emulator to play games. According to early users of the console, the

We've been down this hole with the Retron thing. Emulator creators can crow to high heaven about this, but unless they have the money to fight it, it's a non-starter. This is ignoring the inherit difficulty of making a legal argument about use on free-to-use software with dozens of hands in the dough, some completely gone from the internet at this point.
You must log in or register to reply here.

Sep 6, 2021 started KyoZz
Sep 6, 2021
stranno
Game Dev Hardware The PlayStation 5 Is Starting to Look Like the Revolution It Promised