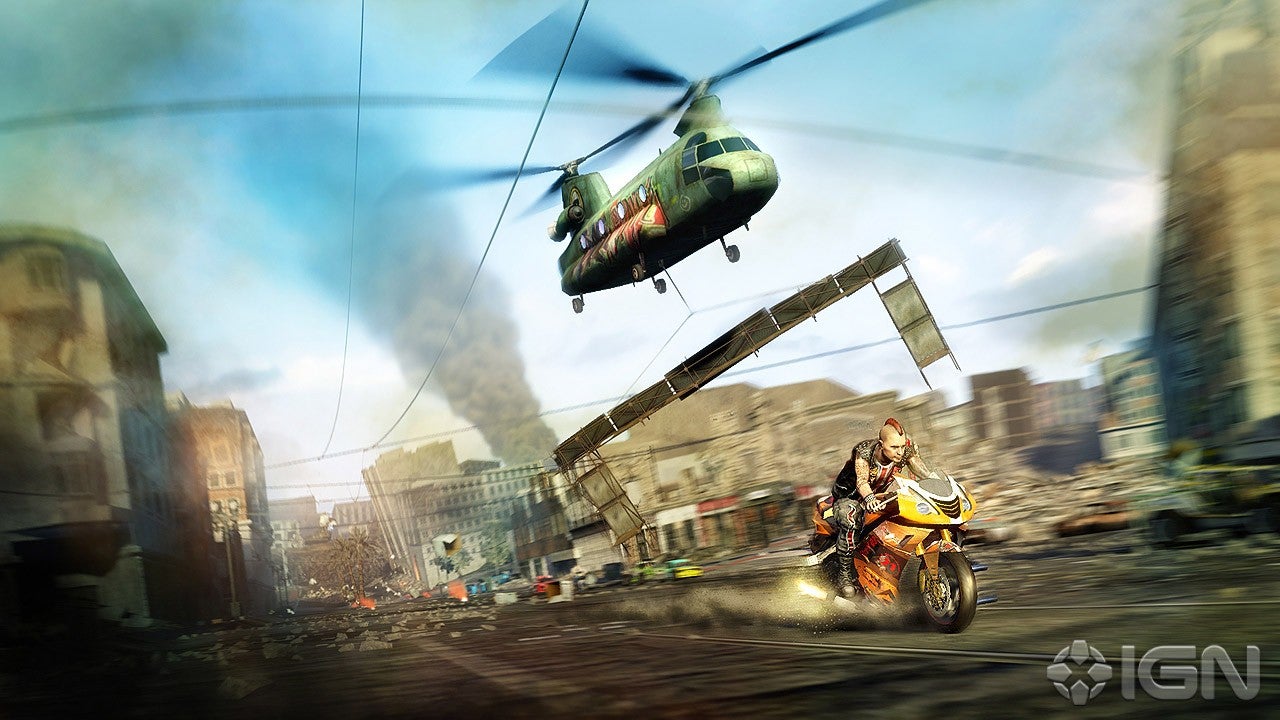 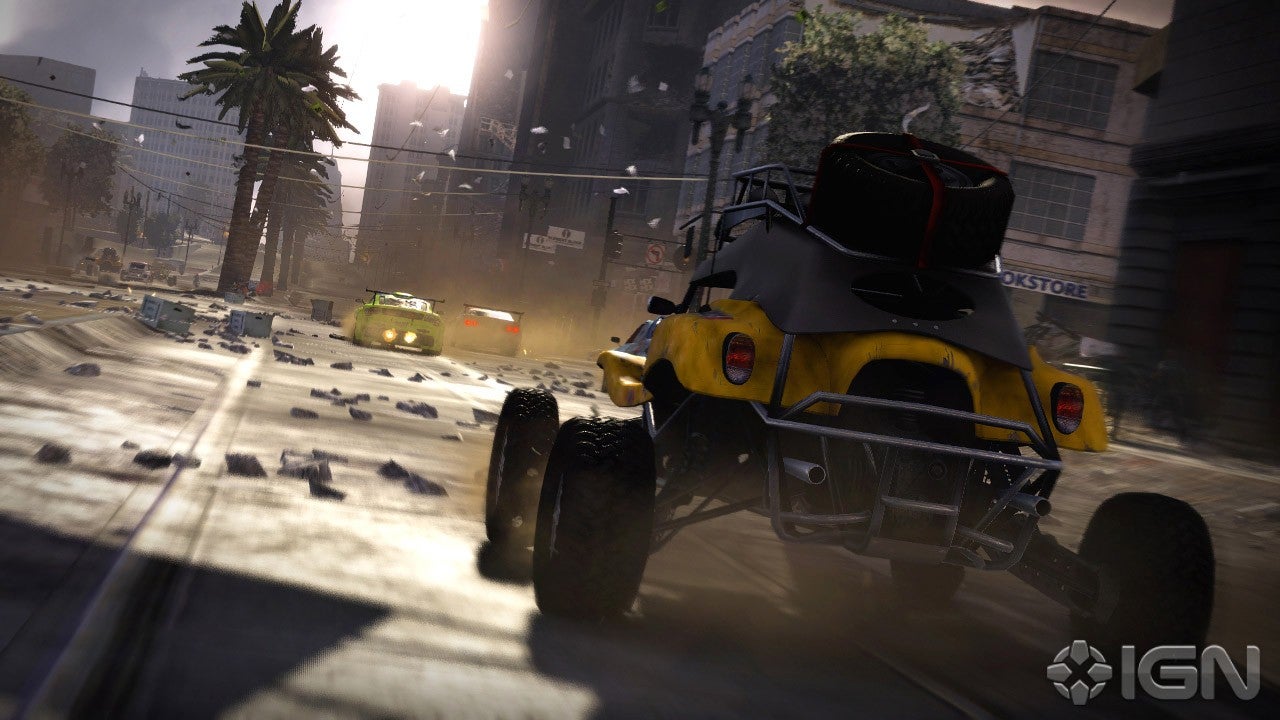 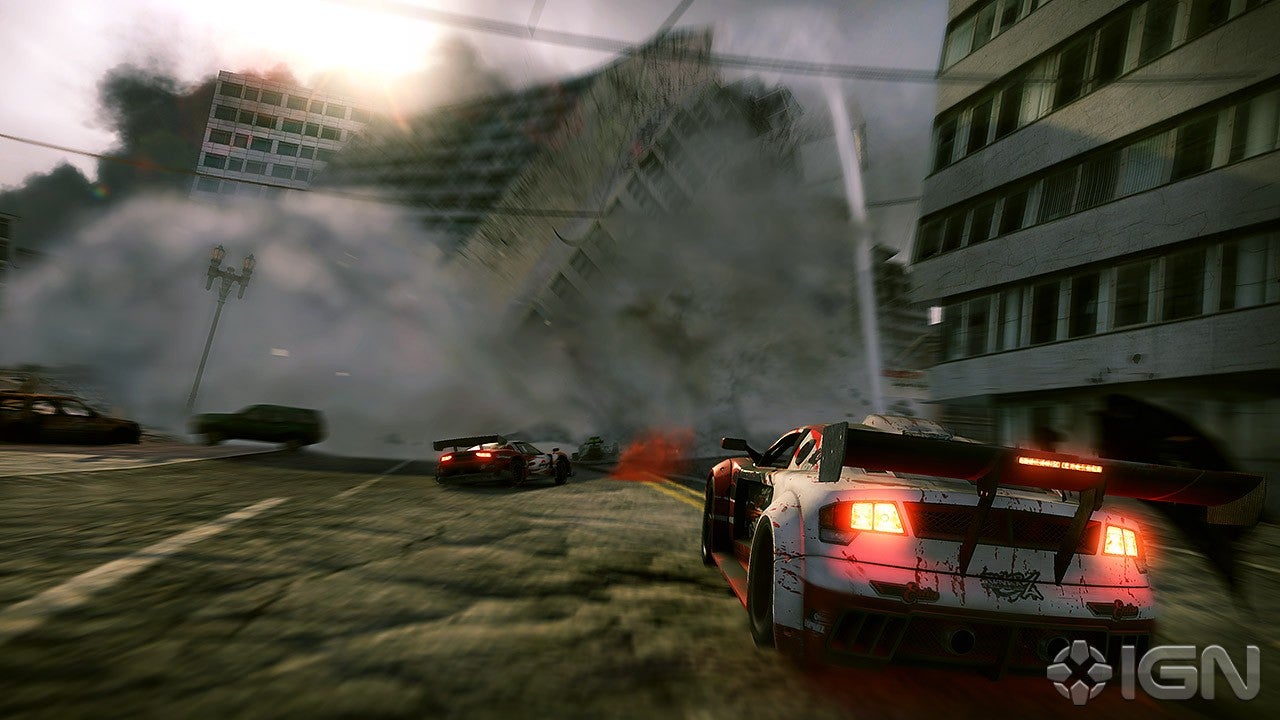 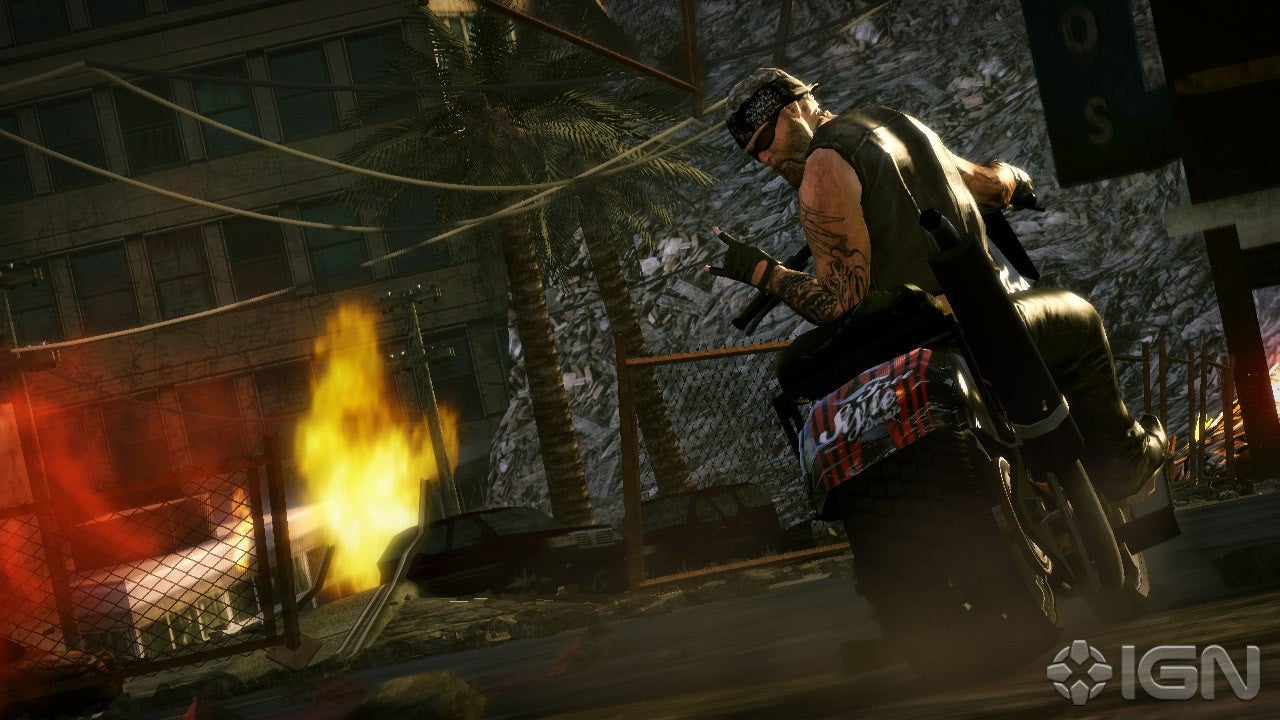 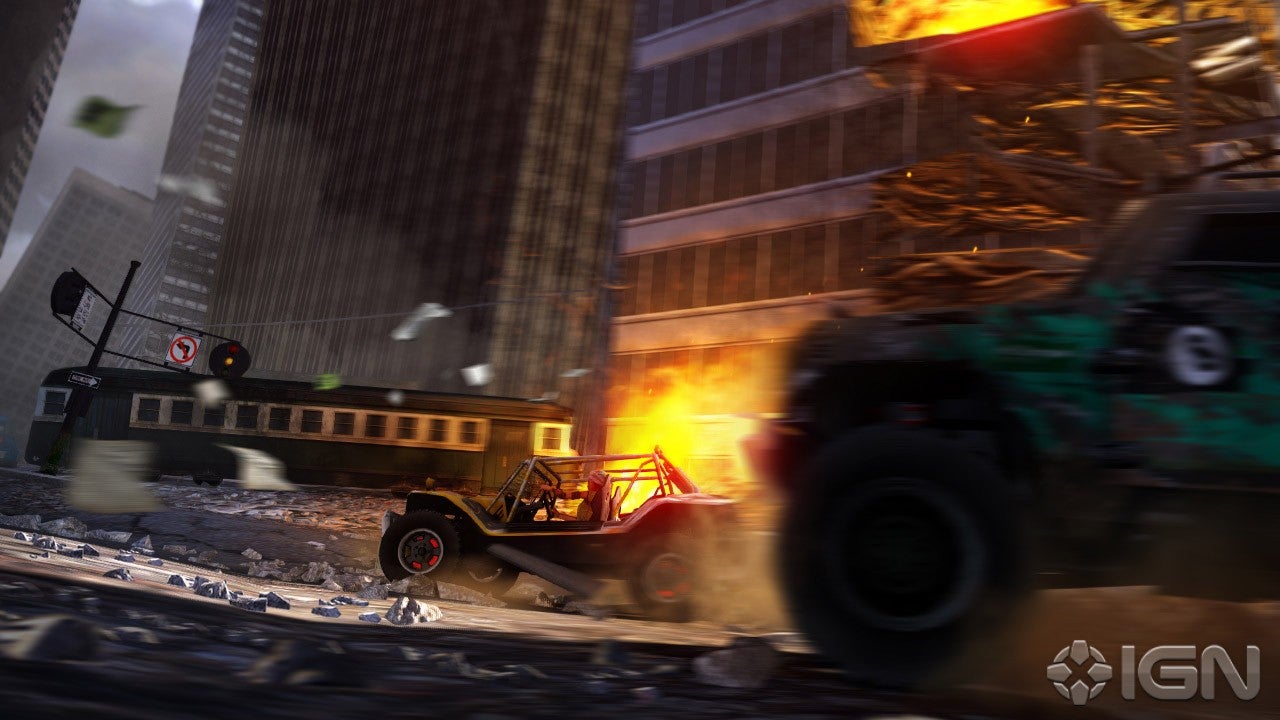 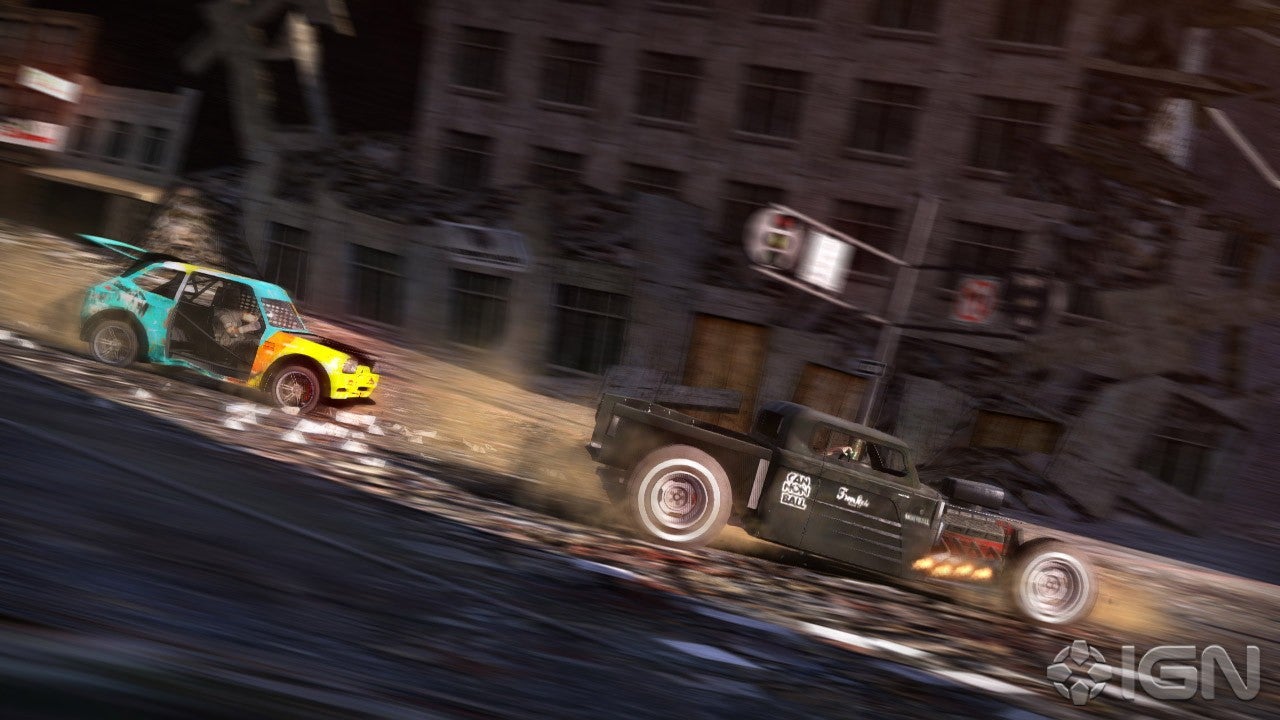 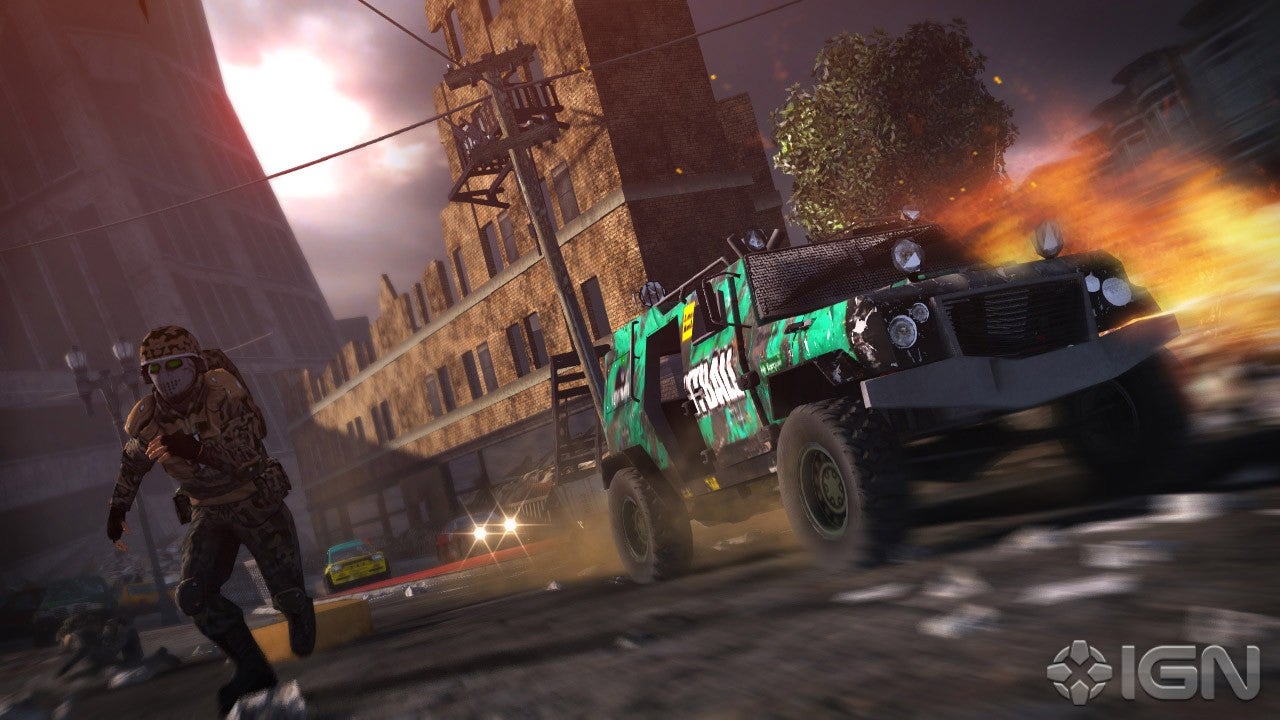 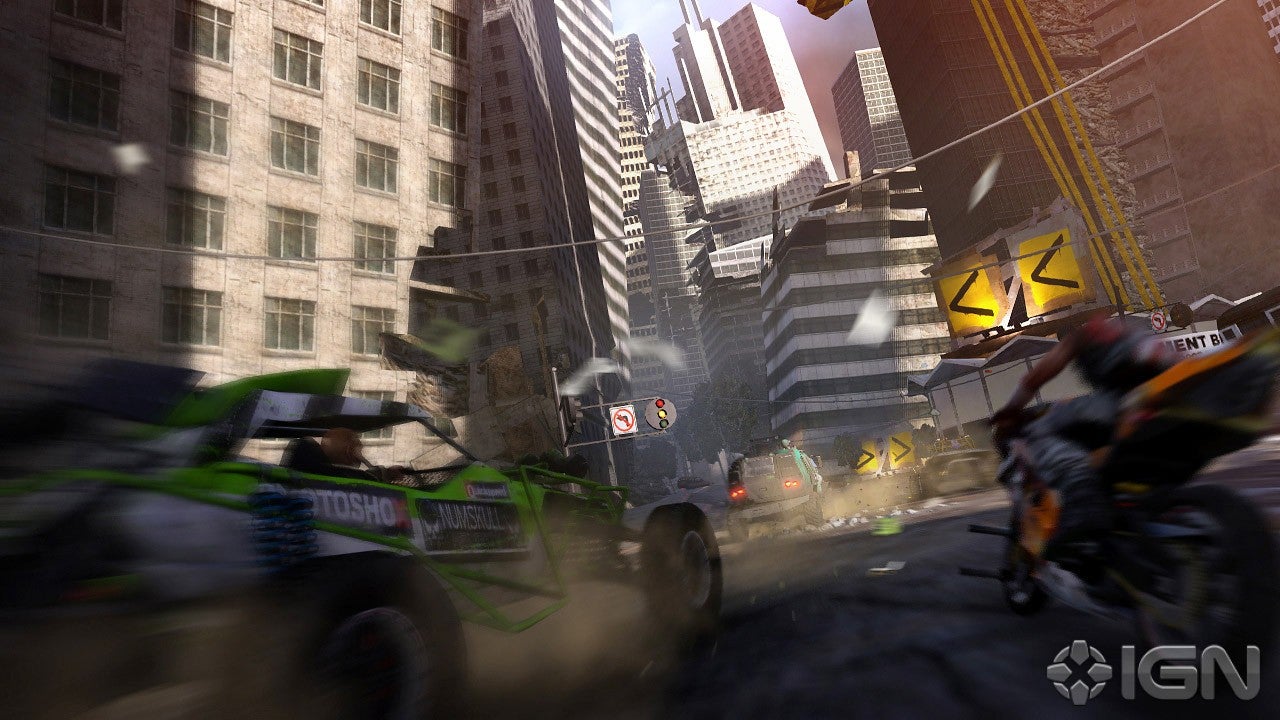 Here's the premise: the MotorStorm outfit, having done dust-bowls and jungles, has packed bags and shipped out, their destination an anonymous and fictional West Coast city that's in throes of a natural catastrophe  and what better place to kick-start another MotorStorm festival? Set over a three day period, MotorStorm Apocalypse's backdrop is rapidly disintegrating. On the first day it'll be all tower blocks and freeways, but come the festival's climax it'll be a mounting pile of rubble  and the final race will be a mad dash for the MotorStorm freight ship as the city consumes itself.

If that all sounds vaguely familiar then you're not alone. Disney and Black Rock's Split/Second was a recent and largely successful attempt to take destructive driving to the next level, and alongside Bizarre's brilliant Blur it's signified something of a small trend as the racing genre tries to come up with an answer for its decline in popularity.

"We spoke to the guys in the States about it, we spoke to people in Japan  but the answer's kind of obvious," says MotorStorm Apocalypse's game director Matt Southern. "There's a sense that other genres are over-delivering, particularly the cinematic kind of experience  the Uncharted 2s and the Modern Warfares of the world  they're not just good, they're mind-blowingly awesome. We see a lot of racers that are good or great  and we've been fairly lucky with high review scores and decent sales  but then you're seeing shooters doing 10 million plus. People want to be really excited  and in the last 12-18 months you've seen a few guys realise the same thing."
Click to expand...

A hands-on with a single track in single-player bears this out. It's initially overwhelming  on top of the usual business of seeing to the opposition - never the easiest of tasks when your sportscars going toe-to-toe with monster trucks and big rig - there's the wealth of environmental hazards to take into hand. The handling is a little nervous - but you would be too if you had this much chaos descending upon you, and it lends a responsiveness that's necessary when avoiding the many hazards.
Click to expand...

It's impressive stuff, and Evolution seems to have learnt valuable lessons from stablemates Naughty Dog (some of whom are helping out with MotorStorm Apocalypse's storyboarding) and Guerrilla. Like the latter it's also taken on the importance of variety, and while we're only witness to the race through high-rises in this early look, the sprawl of the city is going to be fully exploited with parks and the suburbs set to feature.

There is, of course, life beyond MotorStorm Apocalypse's campaign. "The end of the world is really just the beginning," jibes Southern before detailing a multiplayer mode that is, unsurprisingly, taking Modern Warfare's formula as inspiration. Blur proved that it's an approach that works, so expect a familiar system of perks and levelling to form the foundation. "The way that Modern Warfare made online, the progressive thing of rewards and even if you weren't a hardcore gamer you could still get a lot out of it, that was a big influence," Matt tells us.

But remember, MotorStorm Apocalypse is about giving more than expected, and that's seems as true of the multiplayer component as it is elsewhere. "When I first played Modern Warfare I thought it was one of the most generous games I'd ever played," Matt enthuses. "It was this constant delivery of cool shit, and when it came to us asking what's going to excite people about a racing game it's the same kind of thing. We want to make promises on the game and then over-deliver on them. Easy to say but hard to do, and that's the challenge we've set."

So MotorStorm Apocalypse is giving more than its fair share of options. There's four-player splitscreen  not spectacular in itself, but certainly more exciting than normal when you factor in the ability for those four players to join in with 12 others online. Modes can be created from scratch with a simple language system being used to define game rules. It sounds smart, but it's still under wraps.
Click to expand...

Better then Pacifica (which MS2 was called for a while).


IGN said:
The soundtrack sums it up perfectly; the immortal bassline from Lalo Schifrin's Bullitt theme thumps along, evoking the urban cool of one of cinema's most stylish car chases before it's ripped apart by a violent break-beat.
Click to expand...

Can the people saying it looks like a PS2 game STFU now?
S

The first MotorStorm still holds a special place in my heart but I like the idea of making each new entry into a game of it's own. So I'm liking this so far. Looking forward to it.
M

This may be the first MS I buy; looks awesome.
T

looks waaaaaay better than those other shitty screens
B

Having shit collapsing all around you would be amazing. I picked up the last two Motorstorm games day one and this won't be any different.

I wonder if those actually change the way your car handles...

Triple U said:
looks waaaaaay better than those other shitty screens
Click to expand...

That was Rage.
B

Great, another game with perks and % numbers to increase in multiplayer.
O

On the first day it'll be all tower blocks and freeways, but come the festival's climax it'll be a mounting pile of rubble  and the final race will be a mad dash for the MotorStorm freight ship as the city consumes itself.
Click to expand...

this is EPIC
G

This guy wants to shoot/slice you for sure.


Looks surprisingly good. My eyes were literally rolling back in my head when I saw the title, since every current gen. game is set in some variant of post-apocalyptic world, but this might work.
G

Overall sounds quite feature-packed. Slightly surprised they're not confirming 3D upfront given that Evolution Studios has been doing a lot of the work on SCE's 3D technicalities etc

OMG the first motorstorm to look good in screenshots! Game is going to be amazing.
V

Gravijah said:
Can the people saying it looks like a PS2 game STFU now?
Click to expand...

People said that? :lol
A

nofi said:
Our hands on: http://www.thesixthaxis.com/2010/06/10/hands-on-motorstorm-apocalypse/

nofi said:
Our hands on: http://www.thesixthaxis.com/2010/06/10/hands-on-motorstorm-apocalypse/

You had the logo first

edit - go to the site for the logo
S

This could potentially be very awesome. Would love some video.
H

Looking good. It's odd that the drivers are so detailed this time (at least the motorcycle guys). Does this mean the game will have a more character-based narrative?
N

Dibbz said:
OMG the first motorstorm to look good in screenshots! Game is going to be amazing.
Click to expand...

You should see it in motion. Incredible.

Better not be as difficult or have cheap rubberband AI this time or I will not bite.

Day 1. Needs to have the same soundtrack as arctic thunder
<---
G

The leaked screenshots weren't the greatest, and yes, people (someone?) said that.
K 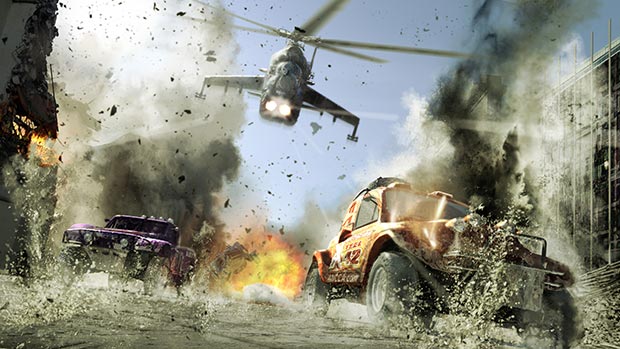 Man Split/Second really did beat 'em to the punch. I want to see gameplay videos of this nao.
M

nofi said:
You should see it in motion. Incredible.
Click to expand...

Yeah, the past Motorstorms have always been a classic case of "it looks better in motion". With the way these screens look I can't wait to see it in real-time.
N

gofreak said:
You had the logo first
Click to expand...

(PS: the logo won't show for anyone that's not been to the site, needs rehosting)
R

Loved number 1, skipped on 2 because the demo seemed hard and a lot of rubber banding, this one interests me.
T

Oh hell yes. So hyped for this. And the setting looks amazing. Haven't had time to read the articles since I'm on my iphone at work, but does it say anything about a release window?
O

day one! and thats coming from someone that skipped the second game in the series
G

The destruction stuff and the geometric particles etc. would seem like they're made for 3D. I wonder how long ago it is that they showed this to press, and if the E3 showing will have 3D.
F

Also in before: " It looks awful, the first one looks better! "
J

OMFG that looks SOOO Awesome. Did't like M2 as much as the first but this is definitely something that looks suite for me!
You must log in or register to reply here.

Opinion We Need Another MotorStorm Game on Next Gen Console

Jan 11, 2021 started Astorian
Tuesday at 11:40 AM
King_Mandu
Infinity Ward Was Working On A Sci-Fi 'Halo Killer' Before Starting On Call Of Duty 4: Modern Warfare.